Optical microscopy approaches that provide acquisition of 3D information from a volumetric object are attractive for a number of biomedical applications. For example, conventional wide-field microscopy requires depth focusing to obtain 3D signals within a biological sample volume. With confocal scanning microscopy,1 micrometer—or sub-micrometer—level resolution can be achieved, and contrast can be improved by using a small aperture to reject out-of-focus light. Efforts to improve the scanning speeds of these techniques, by optimizing scanning algorithms,2, 3 are ongoing. Such methods, however, are complicated and do not eliminate the need for moving parts. In addition, the complex designs that are involved increase the cost of the devices and reduce their robustness.

Digital holographic microscopy (DHM)4 has recently been used to retrieve 3D information for biological samples. With DHM, a high-resolution CCD camera is used to record holograms. Each hologram consists of a 2D slice of the object, and the holograms are superimposed and stored in computer memory. Although with this approach volumetric image data for an object can be reconstructed from the stored information, it requires complex computational reconstruction techniques and has stringent optical and mechanical design requirements for imaging.

We have developed a spatial-spectral imaging method that can be used to acquire resolved images from multiple depths simultaneously. We are able to leverage a strong Bragg filtering property of a wavefront—with respect to angle (spatial) and wavelength (spectral)5—in our volume holographic imaging (VHI) approach to capture multi-plane images in real time, without scanning. Furthermore, a key volume hologram component in VHI offers a 3D pupil, rather than a conventional 2D diffractive element. By incorporating VHI with different recording strategies, we have engineered this functionally unique 3D pupil that can enhance the quality of captured images.5–7 In our approach, holograms are recorded only during the construction of the instrument. The recorded holograms act as regular optical elements, such as a lens or filter, in the imaging setup.

A schematic illustration of our VHI technique is shown in Figure 1(a). The multiplexed volume hologram (VH) is located on the Fourier plane of a 4f imaging setup.5 We use multiplexed and phase-coded VH gratings in the system to measure contrast-enhanced images from different depths. We also use these gratings to display laterally the two depth-resolved images onto the CCD plane, without overlap. We use two mutually coherent (reference and signal) beams to make a spatial filter-encoded VH. Our recording arrangement for this process, which involves the functional recording of an angular-shift multiplexed VH before imaging, is illustrated in Figure 1(b). After the VH is recorded, it exhibits strong Bragg selectivity and can be used as a spectral-spatial filter in the imaging. We relay a thin 2D spatial mask within the signal beam path so that it appears at the center of the VH. To project images from different depths on the CCD with non-overlapping lateral locations, we move the first lens (L1)—see Figure 1(b)—along an axial distance, Δz, during the recording process and we keep the second lens (L2) fixed within the signal beam. During the multiplexing procedure, an internal angle is introduced. 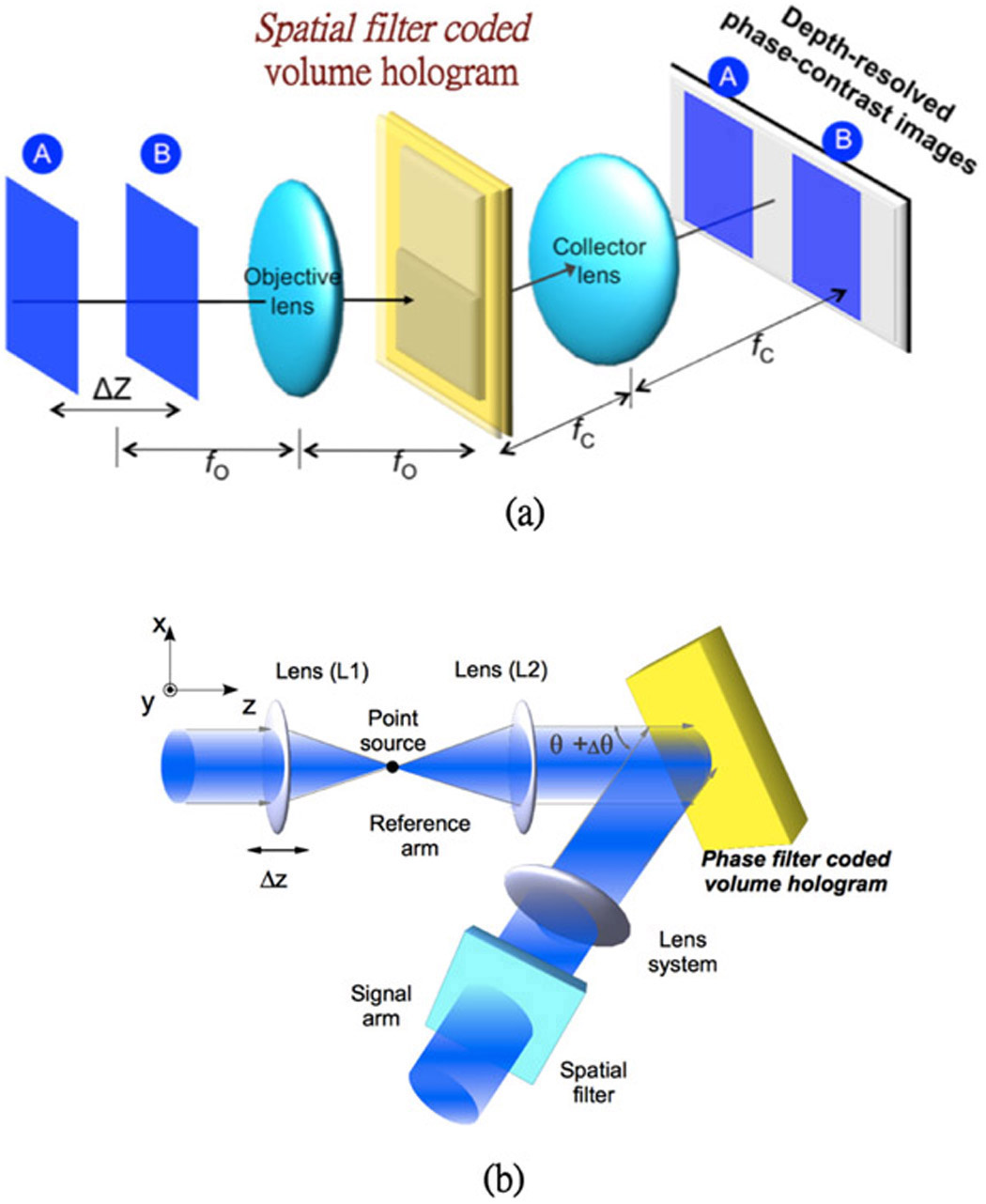 Images of a US Air Force resolution chart, displayed in the 4f VHI system, are shown in Figure 2. We obtained these images using a conventional VH—Figure 2(b) and (d)—and using our functionally spatial filter-encoded VH, as shown in Figure 2(a) and (c). In the images that were obtained with our spatial filter-encoded VH, weak phase information (i.e., high-frequency features) on the edges is enhanced. We have also used human breast cancer cells to test the detection of weak phase features in the cell samples. For these tests we illuminated the samples with a white light, with a bandpass filter that had a bandwidth of about 40nm and a center wavelength at 500nm. As shown in Figure 3, we obtained images of the cancer cells using our multiplexed spatial filter-encoded VH and a conventional VH. The spatial filter-coded VHs significantly enhance the image contrast of the fine structures and enable detailed weak phase features on different planes to be visualized. 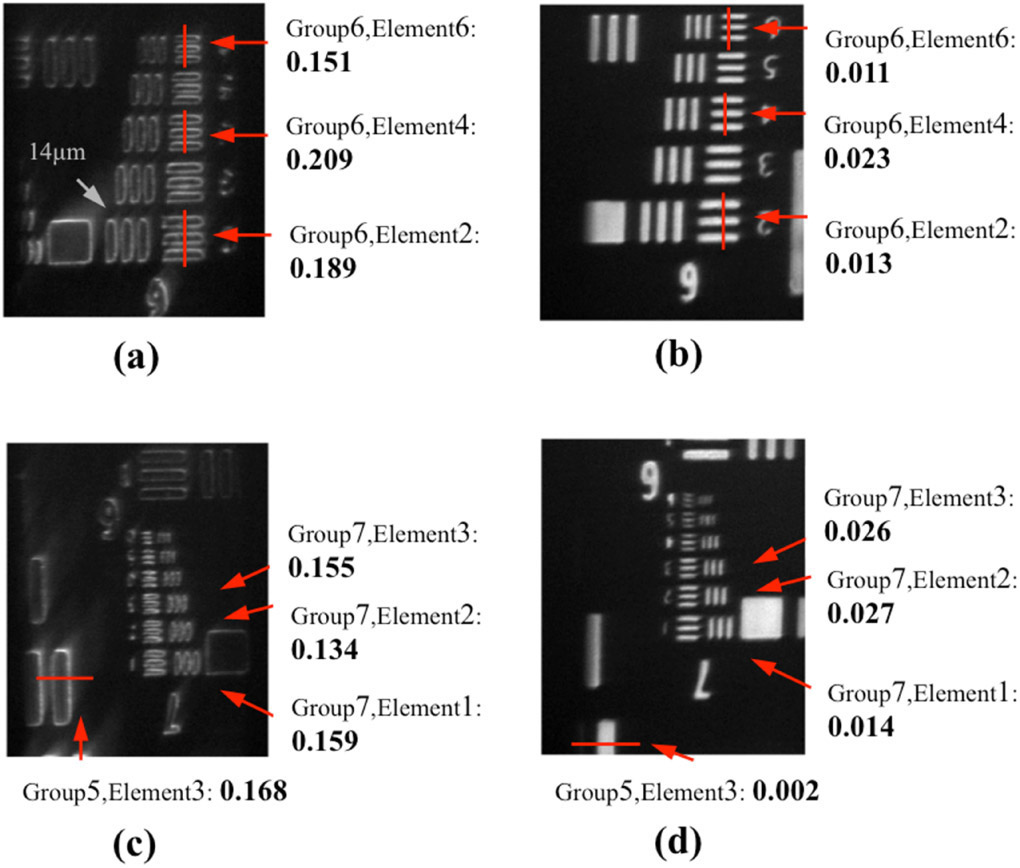 Figure 2. (a, c) Images of a US Air Force resolution chart, obtained using the phase contrast filter-encoded VH. Equivalent images obtained with a conventional VH, without a spatial filter embedded at the VH pupil, are shown in (b) and (d). Contrast ratios for the marked features on the resolution target are given in each case. Images obtained with the functionally encoded VH have significantly better resolution. 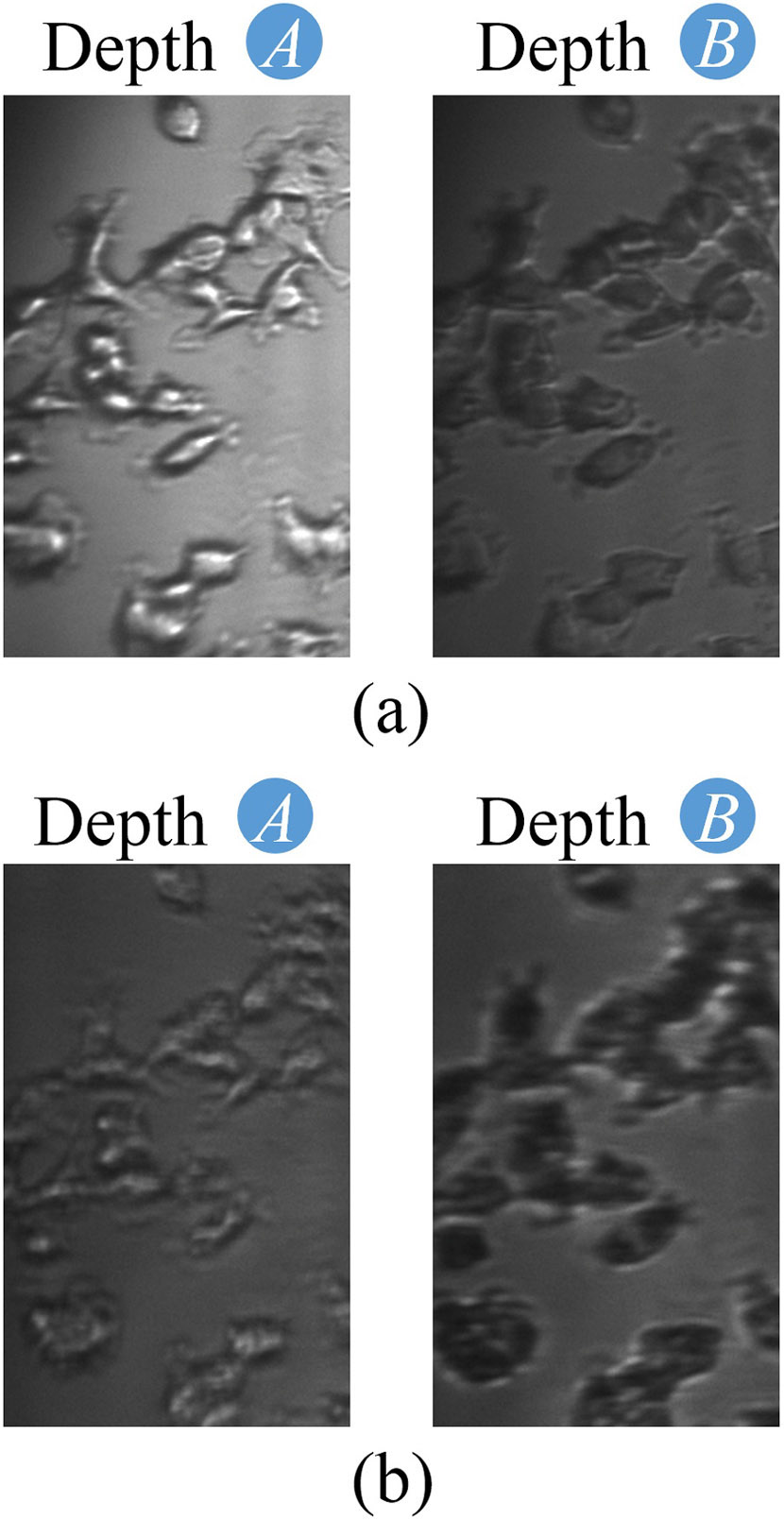 Figure 3. Depth-resolved images of human breast cancer cells. The detail and contrast of the images are noticeably improved when they are obtained using the phase contrast filter-encoded multiplexed VH (a) rather than a conventional multiplexed VH (b).

Several alternatives to the spatial filter-encoded strategy can be engineered within a multiplexed VH pupil in our VHI system. For example, a VHI system that uses multiplexed and wavelength-coded holographic settings can simultaneously obtain information from multiple depths and specific colors that correspond to different depths within biological samples, without the need for scanning.6–8 Compared with previous VHI systems, in our approach, specific wavelengths can be directed to useful locations within an object. Longer wavelengths can also be used to obtain deeper information within objects (e.g., biological tissue) because they have greater penetration depths. By independently varying the intensity of mutually incoherent light sources, we can therefore provide more freedom to tune the brightness and contrast at different focal planes with our technique. Wavelength coding does not rely on dispersion or chromatic aberration, and thus we can make arbitrary arrangements of wavelengths. We can also code and reconstruct longitudinal foci using appropriately multiplexed holograms.

We have developed a VHI system that incorporates various recording techniques. This approach is based on the use of functionally multiplexing spatial-spectral volume holograms. Compared with conventional imaging systems that use 2D pupils, we use a 3D VH pupil in our system to achieve various functions (e.g., 3D imaging without scanning, spatial mask embedded microscopy, and wavelength-coded imaging). We are now working to improve the imaging throughput of our VHI system. We also aim to increase the imaging depth that can be multiplexed by using nanoparticles doped in phenanthrenquinone-poly(methylmethacrylate), or other holographic recording materials.9, 10