The extraordinary increase in data transmission rates and network complexity over recent years has led to a high demand for high-speed, real-time signal measurement. In addition, new signal manipulation techniques are called for. Remarkably, it is possible to exploit spatial-domain techniques in the temporal domain using the concept of space-time duality. This novel approach enables more sophisticated and powerful approaches for temporal processing and information characterization. All-optical signal processing functionalities can be achieved on this basis.

Temporal imaging is generally implemented by using a time lens, which works by imparting a quadratic phase to the input waveform. However, in the generation of an ideal time lens, there exists a very strict requirement for a pure quadratic phase shift and flattened amplitude within the operation window.1 Using a temporal pinhole (a shutter that allows a signal to pass through), we have developed an alternative approach to temporal imaging that is in accordance with spatial pinhole imaging:2 see Figure 1. 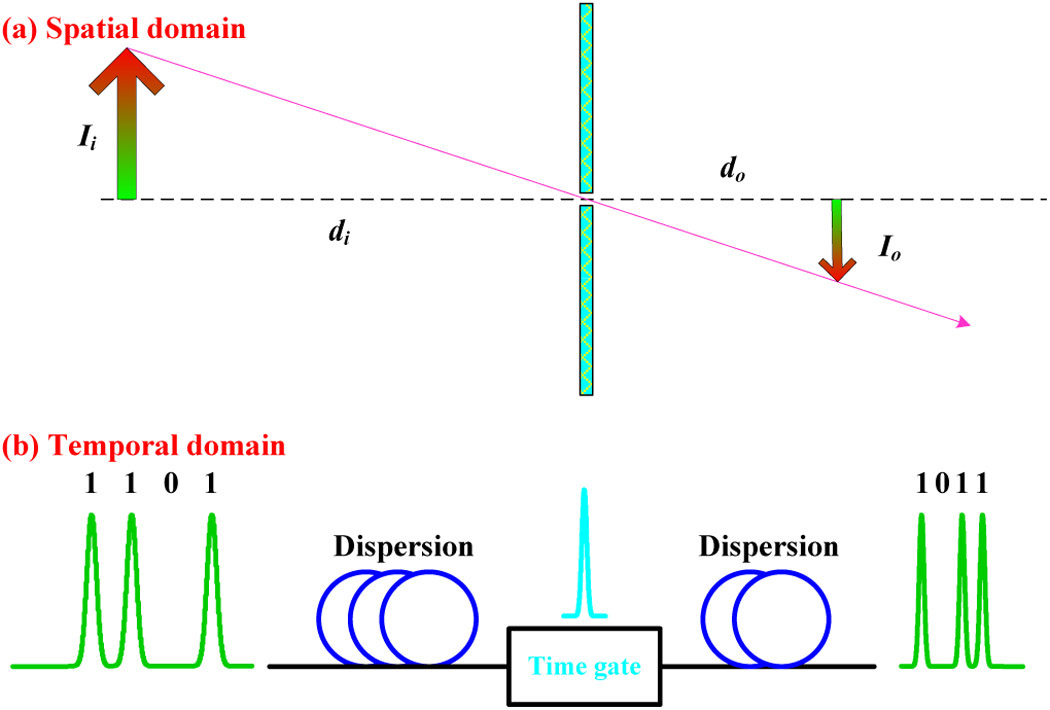 Figure 1. (a) Pinhole imaging in the spatial domain. An object (Ii) placed at a distance (di) in front of an aperture is projected to an image (Io) at a distance behind the aperture (do). (b) Pinhole imaging in the temporal domain. An input waveform with a pulse packet (1101) propagates through a section of dispersion fiber. It then undergoes a short temporal shutter, which allows a small burst of the waveform to pass through. Finally, the waveform propagates in another dispersive fiber and forms the scaled profile of the input waveform (1011).

The configuration consists of two sections of dispersive fibers connected by a temporal shutter. Both theoretical analysis and experimental results show the output waveform to be a scaled profile of the input waveform. Specifically, the output waveform is reversed if the signs of the dispersion on both sides of the temporal shutter are identical. If the signs of the dispersion are opposite, the waveform is non-reversed. A small portion of the dispersed signal contains the total information of the original signal. This technique therefore has the potential to enable the detection and recovery of the original information from a fraction of the dispersed signal.

The concepts of temporal Fourier transformation and temporal imaging, which incorporate space-time duality, have aroused great interest and extensive research. Temporal Fourier transformation is a mapping technique that implements the conversion between the temporal and spectral profile of an input signal. On the other hand, temporal imaging is a waveform manipulation technique that enables the compression or stretching of an input waveform, while preserving its overall profile. It is difficult to interchange between these configurations, or to achieve a varying scale ratio with a temporal imaging system, because the input and output dispersions must be changed simultaneously with respect to the time lens.3

We are proposing a multifunctional scheme within a single structure, composed of a time lens followed by a section of dispersive fiber.4, 5 A schematic diagram showing the spatial and temporal counterparts can be seen in Figure 2. Our theoretical and experimental results show that the output waveforms present the spectrum profile in addition to the compressed or stretched waveform profiles of the input signal, depending on the dispersion. If the fiber dispersion is less than the focal dispersion of the time lens, the output waveform is a non-reversed, compressed replica of the input waveform: see Figure 3. At the focal dispersion of the time lens, the waveform resembles the spectrum of the input signal. However, when the fiber dispersion exceeds the focal dispersion of the time lens, the output waveform is the reversed and scaled profile of the input waveform. This reconfigurable temporal Fourier transformation and imaging technique therefore provides a practical alternative for flexibly obtaining both the real-time spectrum profile and the scaled waveform profile of the input signal. Thus, this method represents a viable approach to acquiring multi-aspect information about the evolution of dynamical processes, especially for non-repetitive phenomena, such as transmitted signal streams, random noise, and impairments in data networks. We also found that the data packet of the transmitted signal can be reversed, with its overall scale preserved, by using the temporal imaging system with a scale ratio of −1. This technique therefore has potential applications for signal encryption and anti-eavesdrop systems for secure communication. 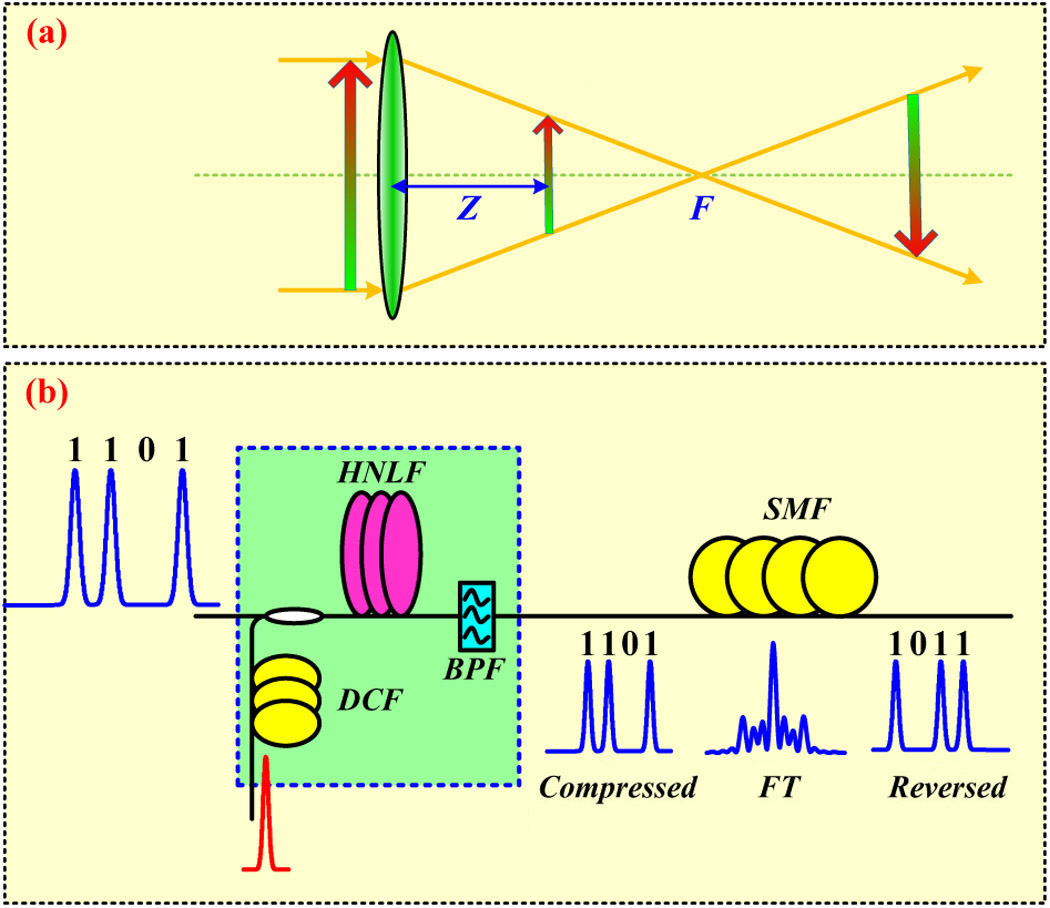 Figure 2. (a) Reconfigurable Fourier transformation and imaging in the spatial domain. An object placed near the front of a thin lens projects to an image at a distance Z behind the lens, whose focal length is F. As the distance is increased, the image corresponds to the upright profile, the Fourier transformed profile (at F), and the reversed profile. (b) Reconfigurable Fourier transformation and imaging in the temporal domain. A pulse stream (1101) passes through a time lens (green box) and then a section of dispersive single-mode fiber (SMF). The output signal presents either the scaled waveform or the Fourier transform (FT) of the input signal, depending on the length of the dispersive fiber. HNLF: Highly nonlinear fiber. DCF: Dispersion compensating fiber. BPF: Band-pass filter.

Finally, by combining this temporal Fourier transformation method with nonlinear signal processing, we have been able to achieve more complicated signal operation functionalities (e.g., convolution and correlation operations). These operations are useful in a variety of applications, including packet-header recognition and detection, and signal encryption and decryption. Using this technique, a triangular-shaped pulse generation based on the self-convolution of a rectangular-shaped pulse can be achieved.6 The configuration is characterized by two sections of fibers with opposite-sign dispersion connected by a parametric mixing process, which correspond to a temporally reduced two-lens (‘4f’) imaging system and a pattern square operation at the Fourier plane: see Figure 4. The resultant triangular-shaped pulse is the self-convolution of the input rectangular pulse, with a pulse width that is half that of the input. Triangular pulses with different pulse widths can also be successfully generated. This approach has the potential to generate more complicated and versatile pulses from different inputs. 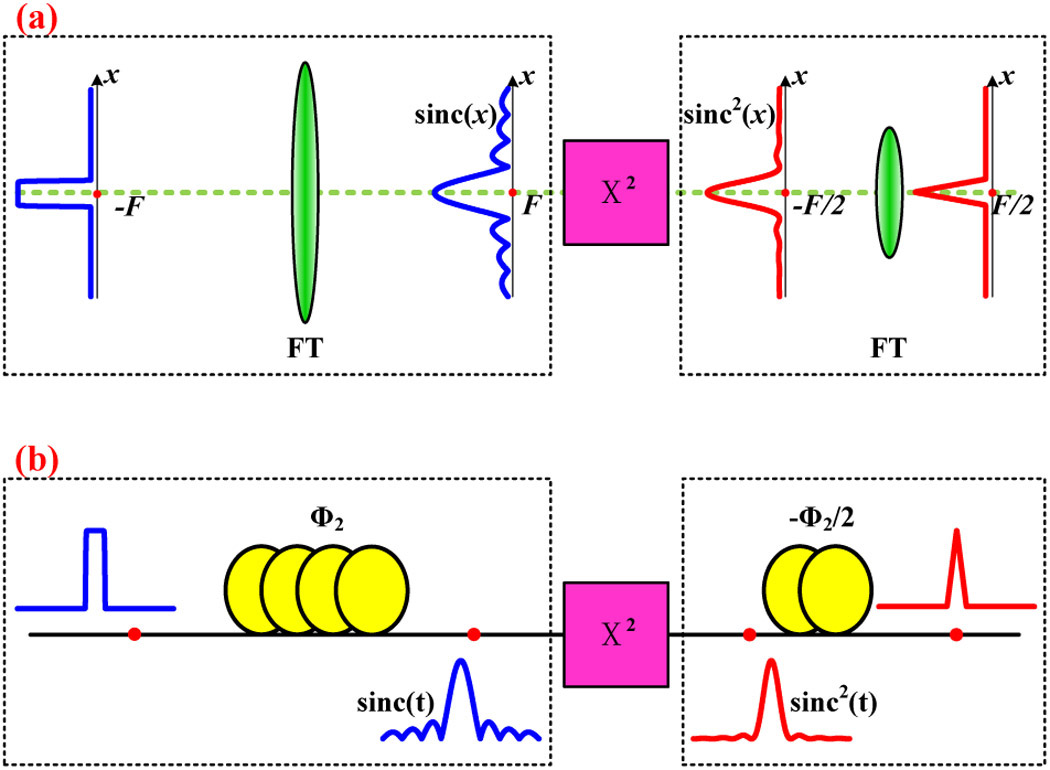 Figure 4. Triangular-shaped pattern generation in the (a) spatial and (b) temporal domain.

In summary, we have successfully demonstrated reconfigurable temporal Fourier transformation4, 5 and temporal imaging,4 temporal imaging using a time pinhole,2 and triangular-shaped pulse generation based on the self-convolution of a rectangular pulse.6 In future work, we intend to combine the simplified temporal 4f (frequency configuration) system with nonlinear signal processing technologies to achieve additional signal operation functionalities.

Xinliang Zhang received his PhD from HUST in 2001, where he became a full professor in 2004. His research areas cover semiconductor optoelectronic devices for optical interconnection and optical signal processing. He has over 220 publications in prestigious journals and conferences.