In recent years, subwavelength-scale inorganic nanostructures (such as nanowires and nanoholes) have attracted significant attention because of the nanostructure-induced light-trapping effect.1, 2 When light is incident on these nanostructures, photons bounce back and forth between nanoscale gaps, which causes an increase in light absorption (see Figure 1). Inorganic materials, such as silicon (Si) and zinc oxide (ZnO), are generally more robust than organic ones. Therefore, inorganic nanostructures can be preserved for longer periods and the manufacturing of these devices is easier than for organic equivalents. In addition to the optical and mechanical benefits of our inorganic nanostructures, we have also improved their electrical properties by synthesizing a device junction along the nanostructure surface. This rough junction substantially increases the junction area, compared with the area of a planar junction (see Figure 2). This enlarged junction area can enhance the short-circuit current density (Jsc) and suppress the series resistance (Rs) because of the proportionality of junction area to Jsc and the inverse proportionality of junction area to Rs. We use solution processes to form both our Si and ZnO nanostructures. We use metal-assisted chemical etching for the Si3 and a hydrothermal process for the ZnO devices, respectively.4 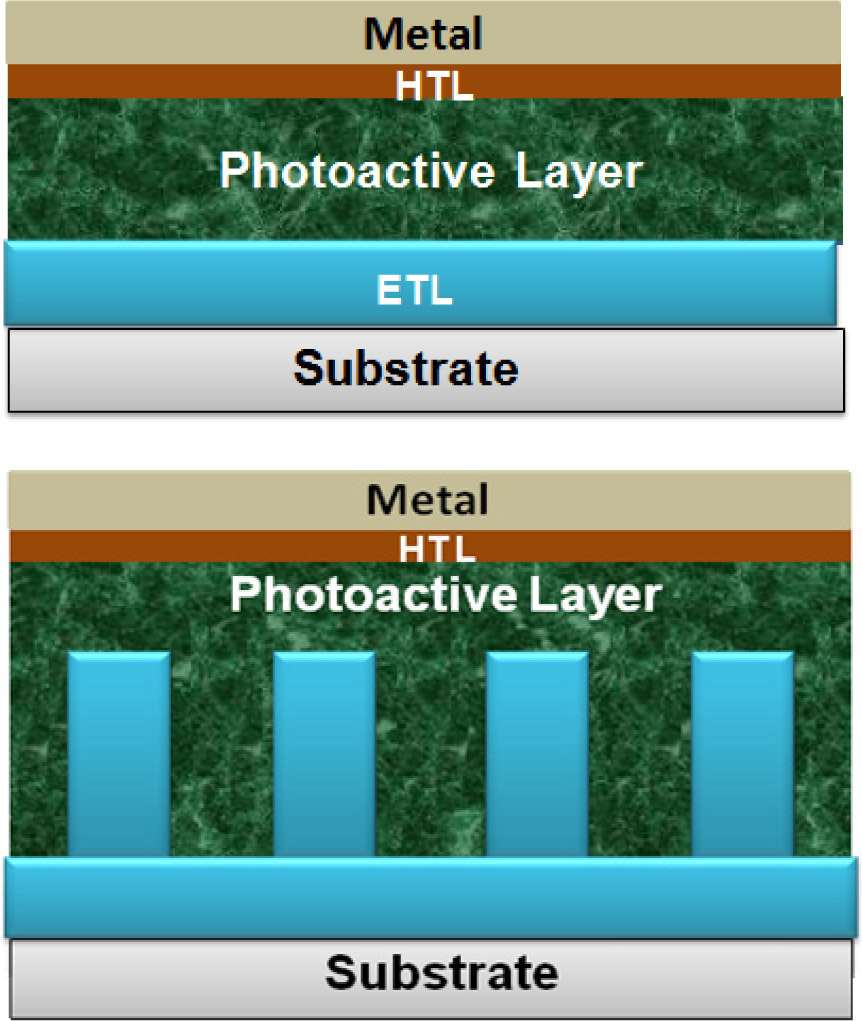 Our Si and ZnO inorganic nanostructures (i.e., nanowires, nanorods, or nanoholes) can be used in Si/organic and ZnO/organic hybrid solar cells. The photoactive region of the Si/organic cells consists of both Si and the Si nanostructure, and for the ZnO/organic cells it is an organic blend. The organic material in our Si hybrid cells functions as a hole transporter, but it acts as a photoactive layer in the ZnO hybrid solar cells.

We use a solution process to form our Si/organic hybrid solar cells, in which we combine Si nanowires (SiNWs) and Si nanoholes (SiNHs) with a conducting polymer, i.e., poly(3,4-ethylenedioxythiophene):poly(styrenesulfonate) (PEDOT:PSS). Our recent results show that both SiNW and SiNH arrays can suppress total reflectance to about 1% in the Si absorption region. We are also able to maintain specific reflectance to less than 10% even if the angle of incidence is increased to 80°.5 Our SiNH/PEDOT:PSS solar cells have high Jsc, open-circuit voltage (Voc), and fill factor (FF) of 36.80mA/cm2, 0.520V, and 66.50%, respectively. We are therefore able to achieve PCE of 12.72% with these devices. For our SiNW device, we obtain a Jsc of 28.86mA/cm2, Voc of 0.525V, FF of 71.75%, and PCE of 10.87%. For comparison, Jsc, Voc, FF, and PCE for a planar device are only 11.14mA/cm2, 0.511V, 37.24%, and 2.12%, respectively. The PCE enhancement of our inorganic nanostructures is therefore significant.3, 5

We have designed and built novel Si and ZnO nanostructures. We have conducted tests on these devices, showing they can be successfully used to improve solar cell performance, especially in terms of short-circuit current density and power conversion efficiency. Our future research will have two main foci. First, we will develop new coating techniques and materials to passivate the surfaces of our nanostructures (to suppress the degradation of cell performance caused by increased junction areas). We will also use our ZnO nanorod arrays to improve the performance of perovskite solar cells.

Ching-Fuh Lin is an SPIE Fellow, IEEE Fellow, and a distinguished professor. His major areas of research are photonics (including hybrid solar cells), light-emission technologies, silicon-based photonics, and physics in broadband semiconductor lasers and optical amplifiers.