Coherent Doppler lidar (CDL) enables measurement of wind turbulence and wake vortices, making it a useful tool when deciding the locations of turbines in a wind farm.1–3 The system operates by transmitting a laser beam and then detecting the radiation backscattered by atmospheric aerosol particles. We can analyze the change in frequency (Doppler shift) of the backscattered signal to obtain the line-of-sight (LOS) velocity component of the air motion, from which we then deduce the characteristics of the turbulent wake.

We have developed an all-fiber CDL system to achieve high-resolution measurements of wind fields.4–6 The 1.5μm wavelength of the laser source is eye-safe, and the CDL component is based on all-fiber laser technology and fast digital-signal processing. It includes a robust semiconductor single-frequency laser and an erbium-doped fiber amplifier in the optical path (see Figure 1), and is therefore resilient, working even in environments where there are frequent vibrations and temperature changes.7 The detection range of 3000m easily covers the wind field, while the speed measurement range is ±30m/s and the uncertainty is 0.3m/s, so that the system is suitable for turbulent wake measurement. It is possible to analyze the CDL velocity results using computer simulations and statistical analysis of the actual data.

We used CDL in both mountainous and flat coastal terrain to observe the turbulent wake of wind turbine blades with sizes from 50 to 100m. Figure 2 shows the outfield experiment in a mountainous region in December 2013, and Figure 3 the coastal zone in April 2014. 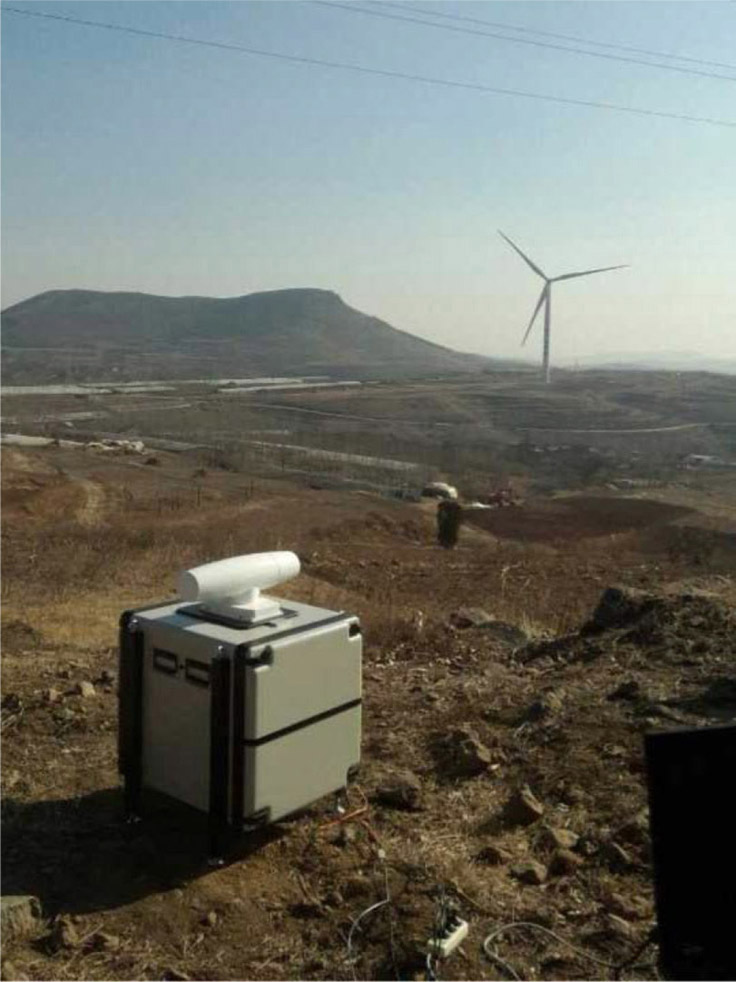 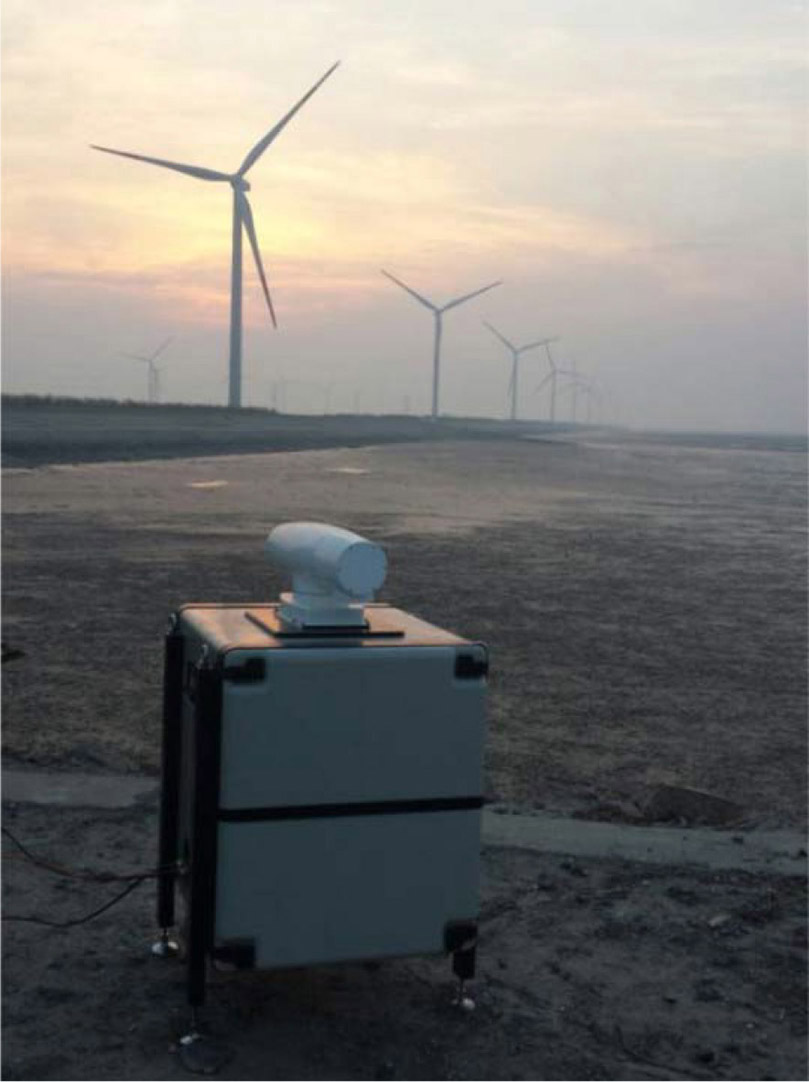 For these tests, we applied the plan position indicator (PPI) and range-height indicator (RHI) scanning modes. For PPI scanning, the elevation of the laser beam was constant, while the azimuth angle varied continuously. For RHI scanning, the azimuth angle was unchanged, but the elevation increased. CDL measurements obtain information about the wind flow in front and behind the wind turbine at the same time. Using the highly accurate spatial resolution of CDL, we made LOS velocity measurements of the wind turbines on 26 December 2013 based on a PPI scan (see Figure 4) and an RHI scan (see Figure 5). The different colors indicate movement of particles along the laser beam: positive (red) away from lidar, and negative (blue) toward lidar. Also indicated in Figures 4 and 5 are the position of the turbines and the wind direction. In a wind farm, the flow effect of the turbine in front would decrease the efficiency and, therefore, the service life of the one behind. The power loss can be described by the velocity deficit downstream behind the wind turbine, as indicated in Figure 6. 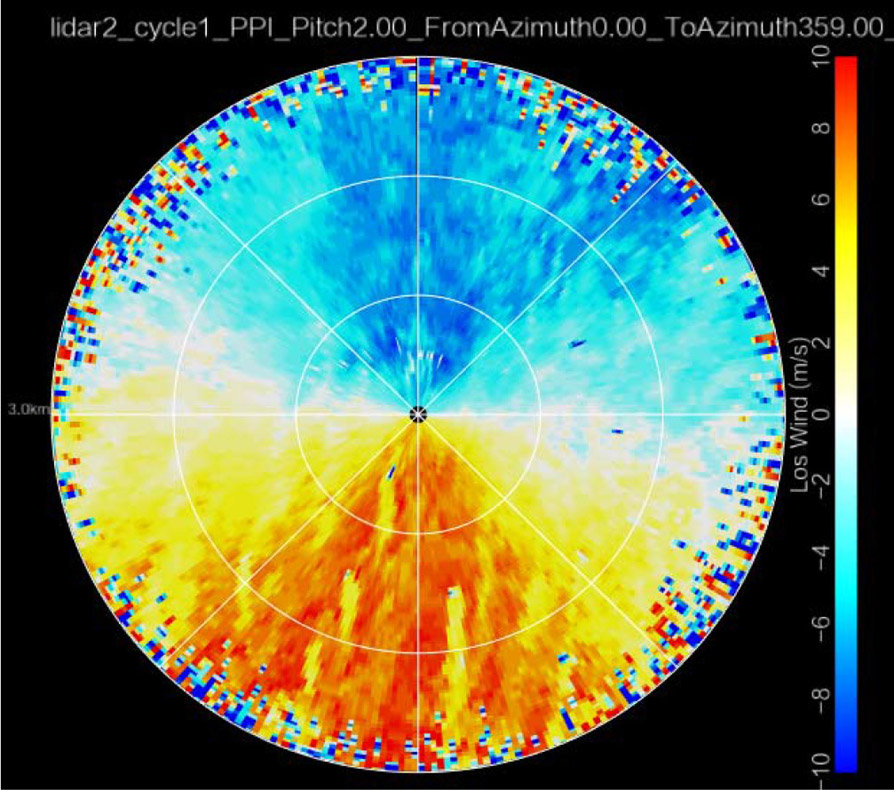 Figure 4. A plan position indicator (PPI) scan covering the wind field of several wind turbines to distinguish the turbulent wake characteristics from the background. The azimuth changes from 0 to 359° and the elevation is 2° for this measurement. The wind was blowing from the north to south. Low signal-to-noise ratio makes the data disordered near 3km. 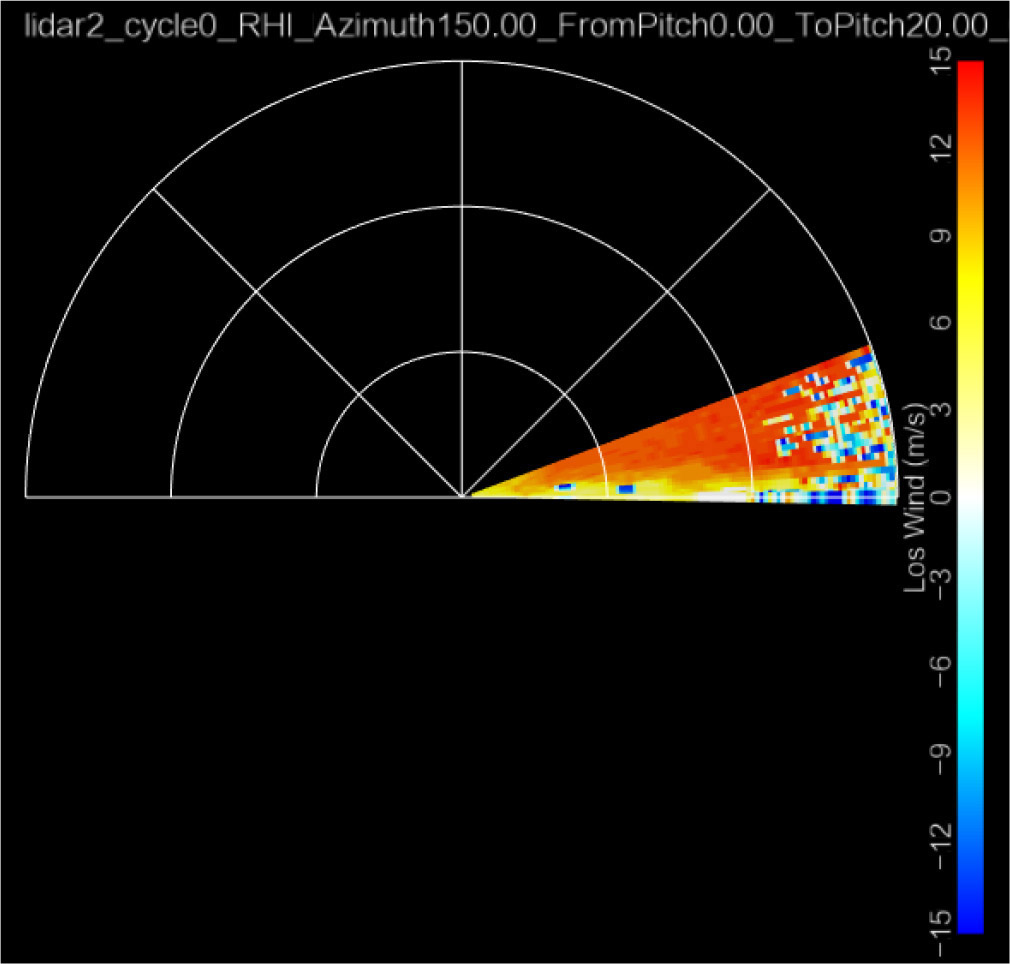 Figure 5. Result of the line-of-sight (LOS) velocity detected by range-height indicator (RHI) scanning mode through the rotor blades (two wind turbines). The elevation varied from 0 to 20° and the wind was blowing from the northwest parallel to the laser beam. The position of the wind turbines was in the range 700–1200m. The decrease in absolute value of the LOS velocity 400m downstream from the wind turbines can be clearly observed. The flow effect of the turbine in front would decrease the efficiency of that immediately behind it. 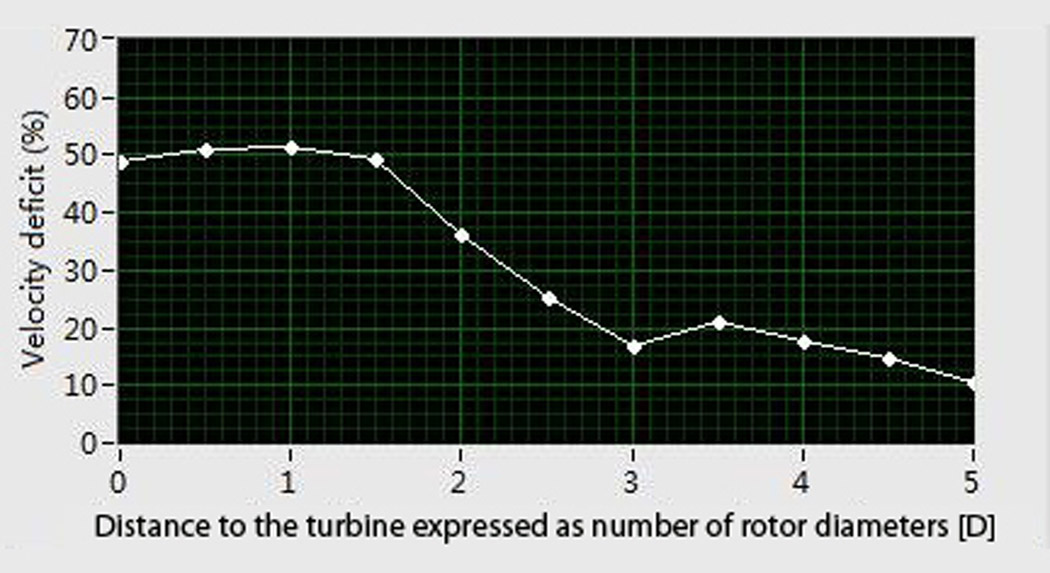 Figure 6. Velocity deficit downwind of a turbine due to the wake vortices of the turbine blade (derived from the RHI scanning mode in Figure 5).

The tests include a comparison of the wind profile achieved by CDL and at a wind tower (a mast with wind sensors). These tests show the feasibility of our system for turbulent wake detection.

In conclusion, our work shows that 1.5μm CDL is a practical tool for wind energy research and a powerful technique for use in the energy industry, specifically for wind farm site selection, design, and optimization. To improve the system further, we will need to measure parameters such as turbulence intensities, particularly for offshore wind farms.