Metasurfaces that can be reconfigured by microelectromechanical systems allow extreme switching in scattering parameters.

Recent advances in terahertz sources and detectors have made terahertz radiation much more accessible for many practical imaging and sensing applications, such as identifying chemicals, characterizing materials, biological sensing, and biomedical imaging, increasing demand for high-performance terahertz passive components. Among these, terahertz modulators play a key role in single-pixel compressive sensing and imaging systems,1, 2 especially when high-sensitivity detector arrays with a large number of pixels are not available.

It is challenging to construct high-performance terahertz modulators based on conventional optical and IR modulation schemes3–8 due to a lack of materials with the desired properties at terahertz frequencies and practical difficulties in scaling device dimensions to operate efficiently in this regime.9 In contrast, the spectral response of reconfigurable metamaterials (constructed by assembling so-called meta-molecule building blocks in a specific arrangement) can be engineered by their geometry, rather than being limited by the characteristics of natural materials at terahertz frequencies. As a result, they offer a very promising platform for manipulating terahertz waves.10, 11

However, until now the operational bandwidth of terahertz modulators based on metamaterials has been limited by the resonant nature of the device configurations employed. There is a good reason for using resonant structures in previously demonstrated reconfigurable metamaterials: the response is highly sensitive to small changes in the metamaterial's constituent parts as a result of external stimuli at resonance frequency.

To enable broadband modulation, we have developed a reconfigurable metasurface that, unlike previous attempts, offers extreme switching in the scattering parameters without use of any resonant enhancement within the device operation frequency range.12 Therefore, it enables the broadband modulation required in time-domain and frequency-tunable terahertz spectroscopy and imaging systems. Moreover, we achieved the demonstrated broadband switching of the scattering parameters through a fully integrated, electrically controlled, room-temperature platform, making it suitable for real-world, practical wave manipulation applications, such as portable sensors and imaging systems.

The metasurface consists of an array of microscale metallic islands integrated with an array of microelectromechanical systems (MEMS) switches (see Figure 1). Activating the MEMS switches brings the previously separate metallic islands into contact with each other. Their electromagnetic properties then change from a low pass (capacitive) filter to a high-pass (inductive) filter over a range of wavelengths that are much larger than the feature size and periodicity of the islands.12, 13 As a result, by shifting the MEMS switches between the contact and non-contact modes, their response to an incident electromagnetic wave changes from transmission to reflection, leading to efficient terahertz modulation over a broad range of frequencies determined by the meta-surface geometry. 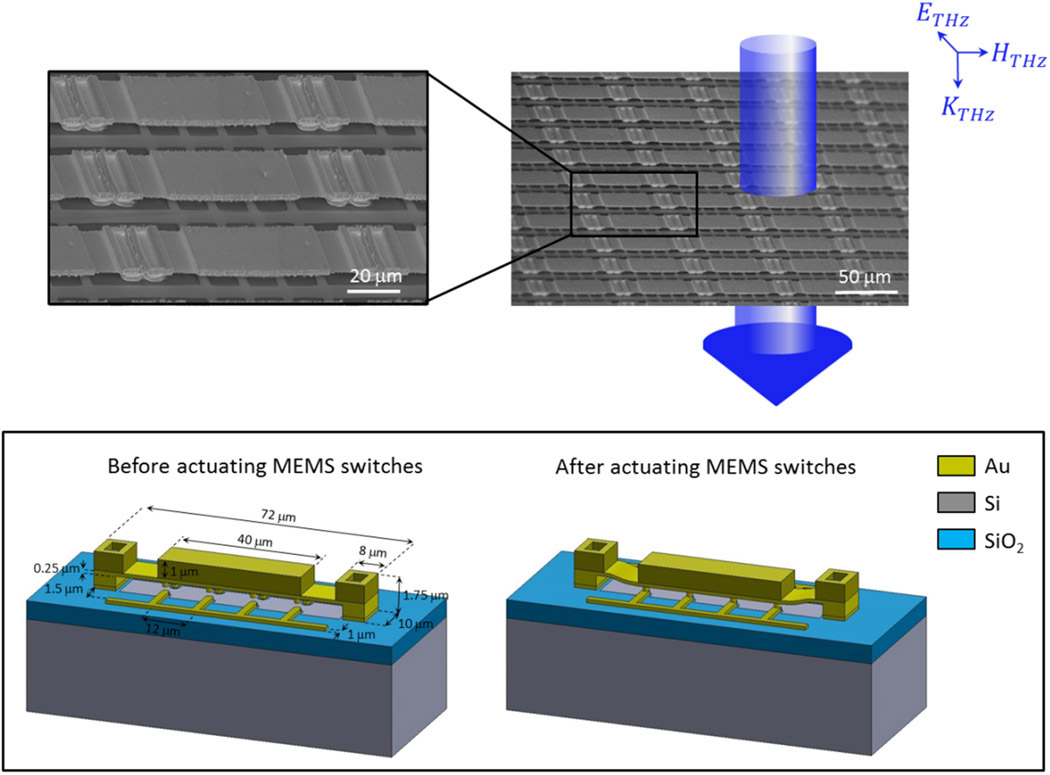 We used the extraordinary switching of the scattering parameters of the presented metasurface to develop a fully integrated room-temperature terahertz intensity modulator. The modulator was fabricated on a high-resistivity silicon substrate and characterized in a time-domain terahertz spectroscopy setup exhibiting terahertz intensity modulation with record high modulation depths (>70%) and modulation bandwidths (>1.5THz). The high modulation depth of the presented modulator offers higher signal-to-noise ratio levels in single-pixel compressive sensing and imaging systems. Additionally, its broad modulation bandwidth makes it compatible with time-domain and frequency-tunable terahertz spectroscopy and imaging systems. We are now working on miniaturizing the reconfigurable metasurface to extend the terahertz modulator's bandwidth beyond 1.5THz. We are also working on improving the yield of the MEMS switch arrays to further increase the device modulation depth beyond 70%.