To address the need for accurate characterization of the mechanical behavior of materials at high temperatures, numerous non-contact optical measurement techniques have been developed. These techniques include moiré interferometry (MI),1, 2 digital image correlation (DIC),3 and electronic speckle pattern interferometry.4 As a basic component for deformation measurement, the quality of the deformation carriers (i.e., gratings that arise due to the periodic structure of a medium, and random patterns called speckles) directly influence the moiré fringe contrast and the speckle pattern quality. Preparing a deformation carrier that operates at high temperatures is therefore a crucial issue for both MI and DIC measurement, and for other advanced optical techniques. Existing technologies for grating or speckle fabrication do not meet all the necessary requirements simultaneously (i.e., high quality, high contrast, high temperature resistance, resistance to oxidation, and good resistance to fall-off for speckles fabricated on the specimen surface at high temperature).5

We have developed a novel moiré grating fabrication method,2 based on a thermal nanoimprint process and a high-temperature transferring technique, which enables measurement at very high temperatures. A micro-speckle particle fabrication method3 has also been developed, based on adsorbing two types of heat-resistant particles with high color contrast (zirconium dioxide and cobaltous oxide, Zr02 and CoO) on the sample surface.2, 3 Using a thermal nanoimprint technique, the holographic grating (used as a mold) can be copied onto the glass substrate with the photoresist on its surface. The high-temperature chromium film is then coated on the surface of the glass substrate. The resulting heat-resistant grating can be transferred onto the surface of a sample using high-temperature adhesive (see Figure 1). We have successfully implemented these gratings in the MI analysis of the mechanical properties of a high-performance alloy (GH3030) at high temperatures, in a tensile experiment carried out at 650°C.2 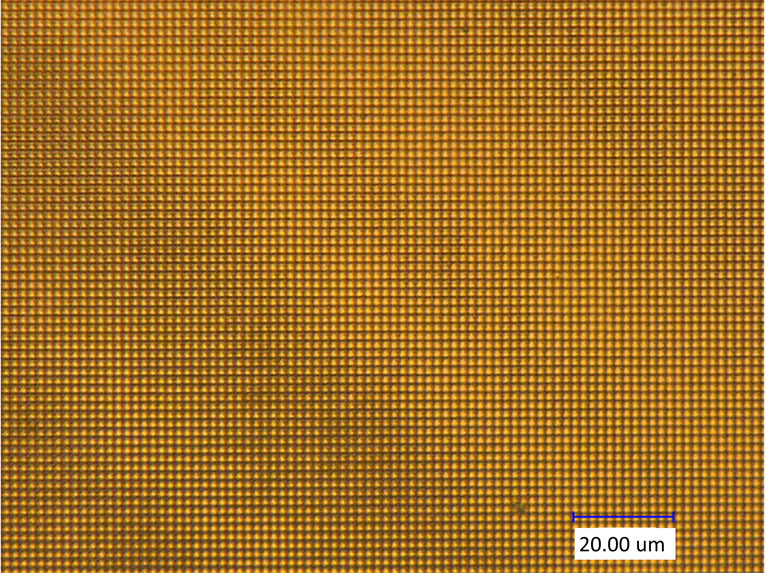 Our DIC method can be used to measure deformation in the near-interface regions and surfaces of thermal barrier coatings (TBCs) during thermal shock (at temperatures of up to 1100°C) by using a high-temperature blackbody radiation suppression technique.3 The system setup comprises a narrow band-pass filter (532±10nm), which is set between a CCD camera and the optical lens. This reduces the grayscale variation in the image caused by blackbody radiation at high temperatures, enabling the speckles to be more easily detected. A key issue in our DIC method lies in the preparation of the speckle, which is used for recording the deformation information. The mixture solution requires a concentration such that the Zr02 and CoO particles are dispersed on the coating surface or near-interface regions. The particles must be stably adsorbed in these regions after solvent evaporation and must also be able to withstand high temperature (thermal shock) without becoming detached.

We have developed a three-step method to achieve these requirements. First, two types of micro/nanoparticles with high contrast and heat resistance are chosen (in this case, Zr02 and CoO). In the second step, the dispersion time and the proportional concentration range of the alcohol and particles is optimized. In the final step, particles without strong adhesion are removed using a hairdryer. The remaining micro/nanoparticles strongly adhere to the specimen surface and interface via capillary, van der Waals, and electrostatic forces.3 Due to the large difference between the coating and substrate colors in the TBC specimen—see Figure 2(a)—adjusting the CCD exposure to obtain a speckle pattern with high quality presents a challenge. However, employing our technique ensures that the artificial speckle pattern is effective for thermal shock experiments on the near-interface regions of the TBCs: see Figure 2(b). 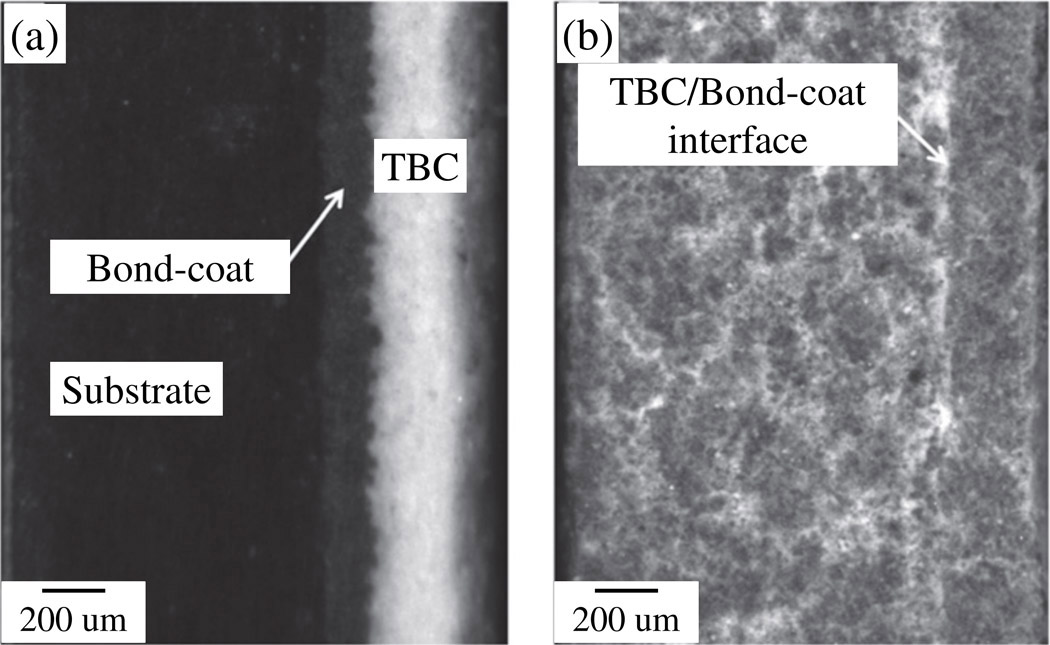 Figure 2. Images of the near-interface regions of thermal barrier coatings (TBCs) (a) before and (b) after the fabrication of high-temperature speckles. 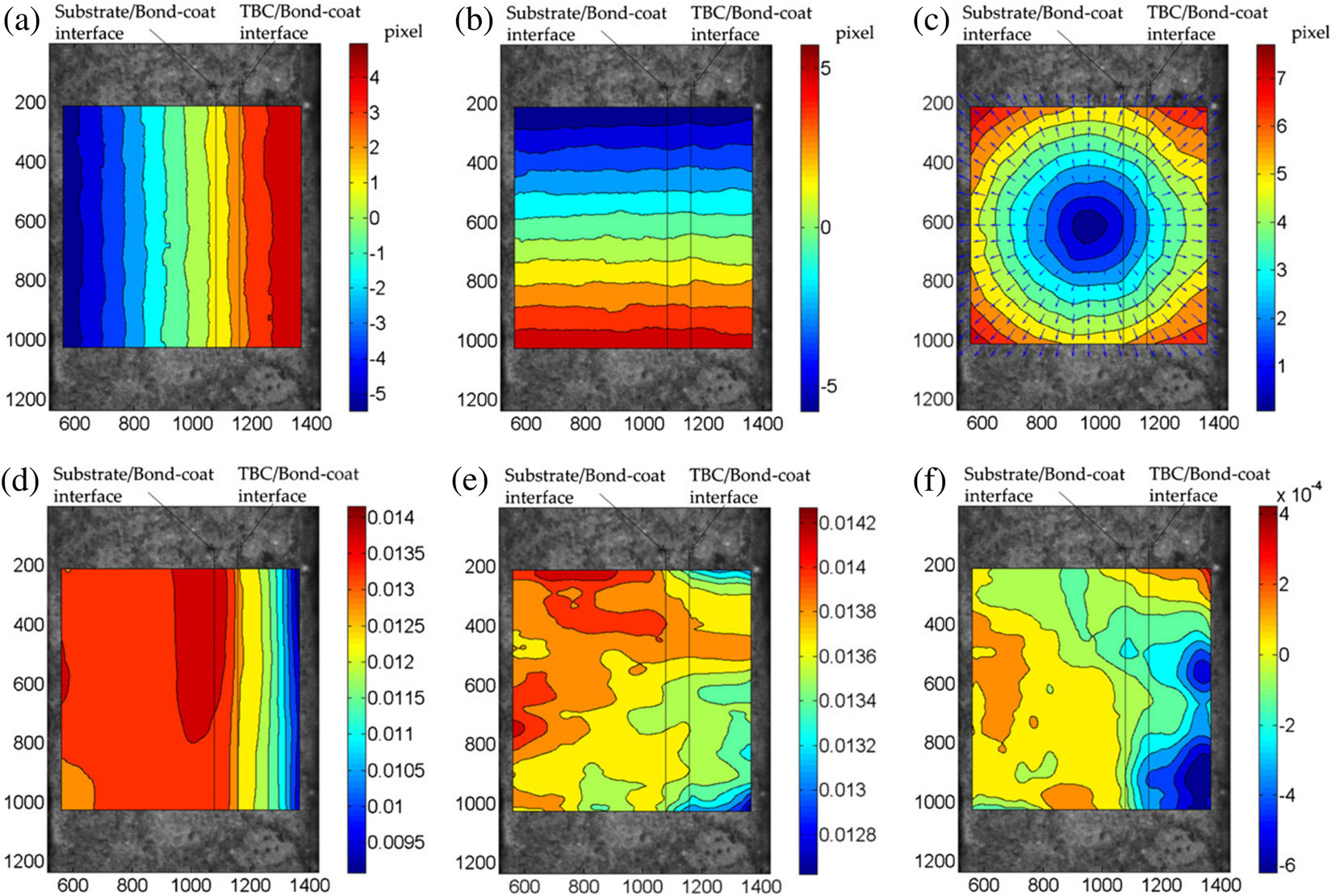 In summary, the speckle produced using our new micro-machine-based fabrication technique can be implemented for deformation measurements of near-interface regions and surfaces on TBCs during thermal shock. In future work, we intend to continue improving production technologies for deformation carriers that operate at high temperatures by optimizing technological parameters and directly fabricating them on specimen surfaces. We also plan to extend the application range of the carriers to enable the measurement of residual stress, thermal mismatch, and local stress concentrations at high temperatures.