Chang'E 3 is an unmanned lunar exploration mission operated by the China National Space Administration (CNSA). The mission consists of a lunar surface lander and a lunar rover, which is known as Yutu (meaning ‘jade rabbit’). Both parts of Chang'E 3 carry a number of scientific payload instruments.1–3 This mission is the third in the Chang'E program, and is seen as a precursor to future robotic and manned lunar missions. The main mission objectives were to achieve the first soft landing of space hardware by the CNSA and to conduct the first Chinese lunar exploration with a rover. In addition, this mission has led to the development and demonstration of key technologies that will be used for future missions.

Change'E 3 entered into orbit around the Moon on 6 December 2013 and landed on 14 December 2013. The landing site was at 44.12°N and 19.51°W, within relatively young titanium-rich lava flows in the northern part of Mare Imbrium. One of the main scientific instruments on Yutu is the Visible and Near-IR Imaging Spectrometer (VNIS). This instrument has been designed to obtain mineralogical and compositional information for the lunar soil as the rover traverses the surface. The VNIS underwent a full program of pre-flight ground tests, calibrations, and environmental simulation tests.

In our VNIS instrument we use non-collinear acousto-optic tunable filters (AOTFs) as dispersive components within the visible/near-IR spectrometer (operating in the 0.45–0.95μm range) and shortwave IR (SWIR) spectrometer (operating in the 0.9–2.4μm range), as well as in the calibration module that has dust-proofing functionality.4, 5 The VNIS is mounted on the front of the Yutu rover (see Figure 1) so that it can detect objects on the lunar surface within a 45° viewing angle. Spectra and geometric data are obtained with the VNIS from a height of 0.69m. The major technical specifications of the VNIS are given in Table 1.5 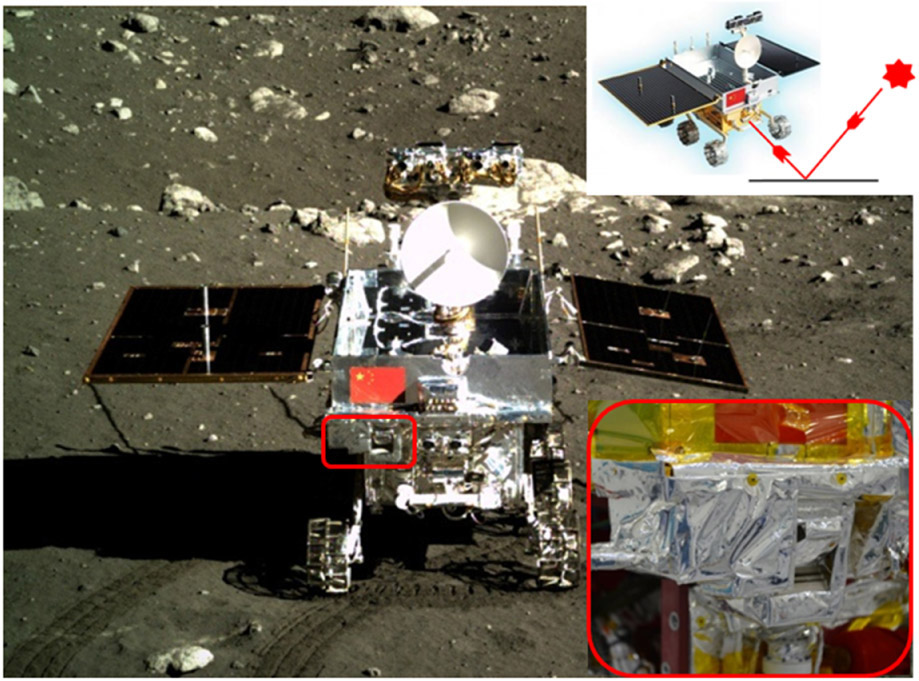 Figure 1. Photograph of the Chinese lunar rover Yutu. The red box indicates the position of the Visible and Near-IR Imaging Spectrometer (VNIS) that is mounted on the front of the rover (shown in bottom right inset). The top right inset illustrates how reflectance spectra are measured by the instrument.
Table 1.Major technical specifications of the visible/near-IR (VIS/NIR) and shortwave-IR (SWIR) parts of the VNIS. φ: The circular SWIR channel field of view.

An overview of our VNIS system and its operating modes is shown in Figure 2. The instrument works4 when reflected light from objects on the lunar surface is incident on the AOTFs, where only narrow-wavelength band data or imaging information passes through. This depends on the frequency that the radio frequency (RF) driver generates. The quasi-monochromatic light then converges on the detector. We are able to realize flexible and rapid wavelength selection with the spectrometer by altering the driving frequency that is exerted on the AOTF. We are therefore able to acquire spectra or image data at different wavelengths across the available spectra coverage. 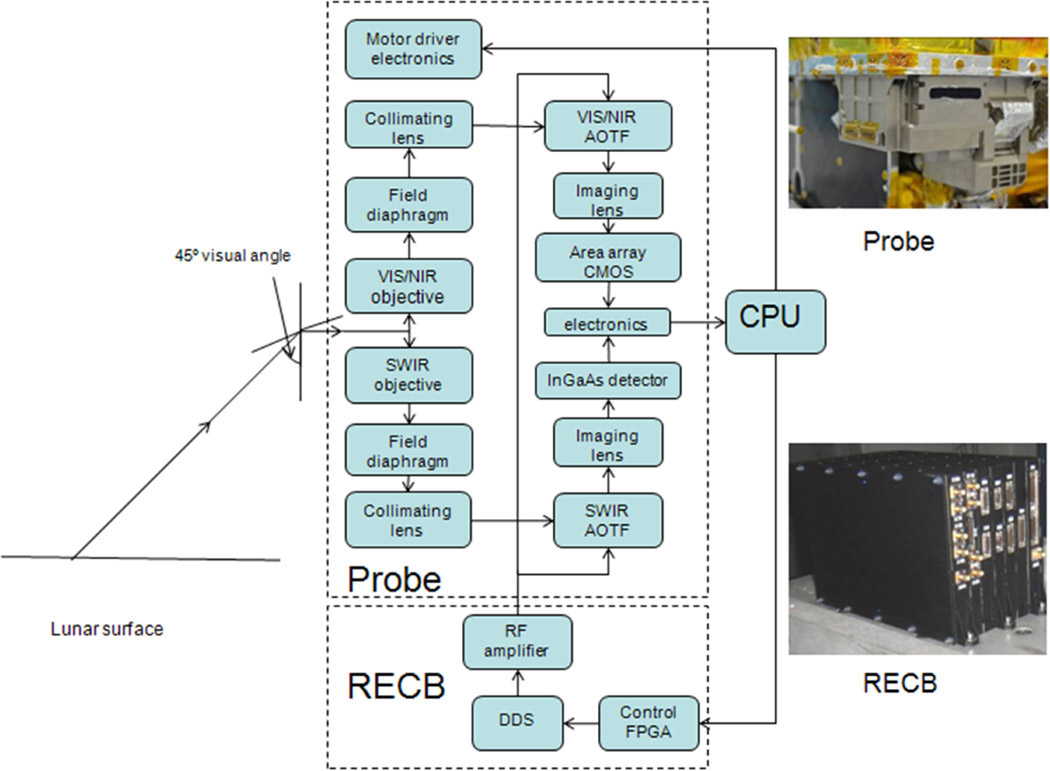 Figure 3. Schematic view of the VNIS functional structure and its three operational modes.

The first lunar surface VNIS operations were conducted on 23 December 2013. Since then we have obtained several spectral images and data from the lunar soil in different geographical regions. We have conducted data pre-processing and in situ radiometric corrections to obtain reflectance spectra for these measured regions.6, 7 A pseudo-color lunar soil image that we have synthesized using on-orbit scientific data (obtained on 14 January 2014) is shown in Figure 4. An example spectral reflectance curve from the VNIS is shown in Figure 5. Our preliminary analysis suggests that this spectrum exhibits the characteristic absorptions that are typical of the silicate minerals pyroxene and olivine, which are abundant on the lunar surface.5 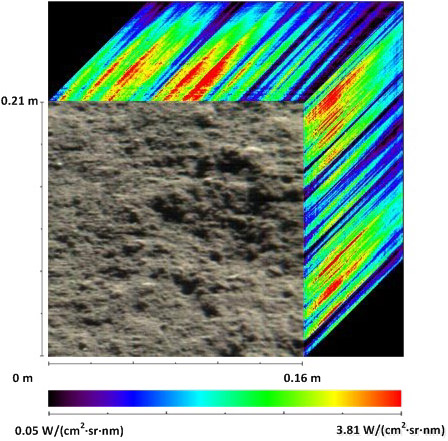 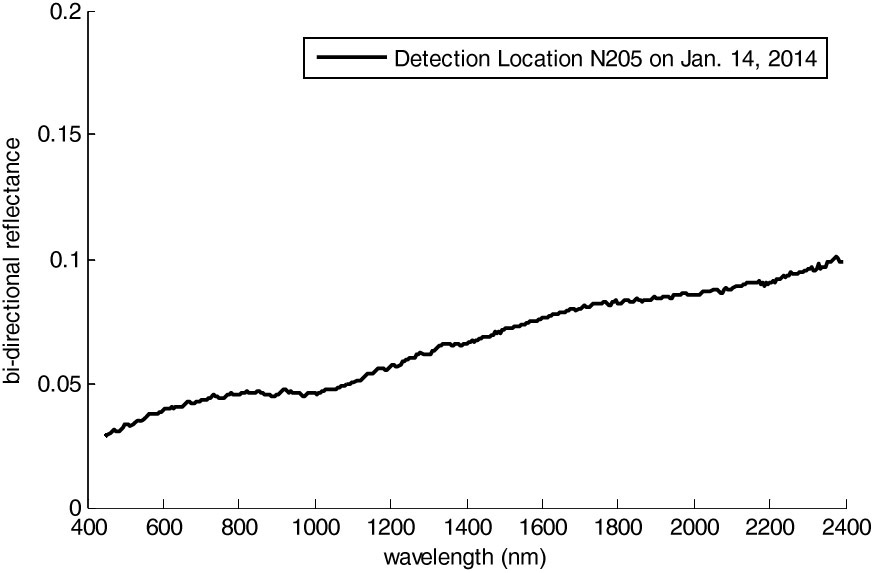 Figure 5. An example reflectance spectrum from preliminary VNIS measurements. This curve exhibits the absorptions that are characteristic of the silicate minerals pyroxene and olivine (i.e., at about 1000nm and about 2000nm).

The VNIS that we have designed and developed is the main scientific payload instrument onboard China's Chang'E 3 lunar rover. The VNIS is capable of simultaneously acquiring full reflectance spectra for objects on the lunar surface and performing in situ calibrations. These measurements include the first in situ spectral imaging detections on the lunar surface. This high-resolution information can provide a valuable reference for several scientific measurements and applications.8 We are now developing a new spectrometer that is based on the AOTFs we use in the VNIS. This new spectrometer is equipped with a 2D scanning mechanism to provide a large detection area. We are also working to extend the spectral range of this spectrometer to the mid-IR (about 3.2μm) and to reduce its mass. We hope that this spectrometer will feature as part of future lunar or Mars missions.