Traditional designs for silicon (Si) photonics often use a metal strip, placed above thick upper-cladding on top of a Si core, as a micro-heater.1 Such designs, however, have low heating efficiencies, slow responses, and small thermal dynamic ranges. Proposed Si hybrid plasmonic waveguides2–4 have ultra-thin silica (SiO2) insulators and reduced heating volumes, and are thus thought to be promising platforms for energy-efficient thermal tuning that can overcome these drawbacks.5 These devices can be used to achieve simultaneous nanoscale light confinement and relatively long light propagation distances, and as such have attracted much attention.

Hybrid nanoplasmonic waveguides usually consist of a Si high-index core, a metal strip, and a SiO2 low-index nanoslot between them. When the metal strip in a Si hybrid nanoplasmonic waveguide is heated, the device has a uniform temperature distribution in the Si core region (which is almost as hot as the SiO2 nanoslot and the metal heater). This is because the SiO2 insulator layer between the metal strip and the Si core is very thin (about 50nm). The thermal tuning response time of these waveguides is on the order of several microseconds, and faster tuning can be achieved by reducing the thickness of the SiO2 under-cladding.

In the past, we have proposed a Si hybrid nanoplasmonic waveguide—see Figure 1(a)—that consists of a Si-on-insulator (SOI) nanowire with a metal cap.6 This device has a simplified fabrication process and can be conveniently integrated with a Si nanophotonic circuit on the same chip. Several Si hybrid nanoplasmonic waveguides, with some modifications, have been presented and experimentally demonstrated in the following years.7 The design of our Si hybrid plasmonic waveguides is very flexible because the Si core layer can be deeply or shallowly etched, and because the metal-strip and Si-core widths can be unequal. We are able to confine optical fields very tightly by appropriately choosing a SiO2 nanoslot thickness that enables sharp bending. Light can still be confined in the slot region even when the bending radius is as small as about one-third of the operation wavelength, as shown in Figure 1(c). Our Si hybrid nanoplasmonic waveguides are thus a promising way to realize ultra-dense devices with sub-micrometer footprints for photonic integration,8 such as power splitters, directional couplers, sub-micrometer rings/donuts, and photonic-crystal cavities.9–12 In our hybrid plasmonic waveguides, the effective index (including the real and imaginary parts) as well as the field profiles of the guided modes is very polarization-sensitive. We have therefore used our waveguides to develop novel ultra-small on-chip polarization handling devices. As demonstrated by various groups, these can include polarizers,13–15 polarization beam splitters (PBSs),16–18 and polarization rotators.19 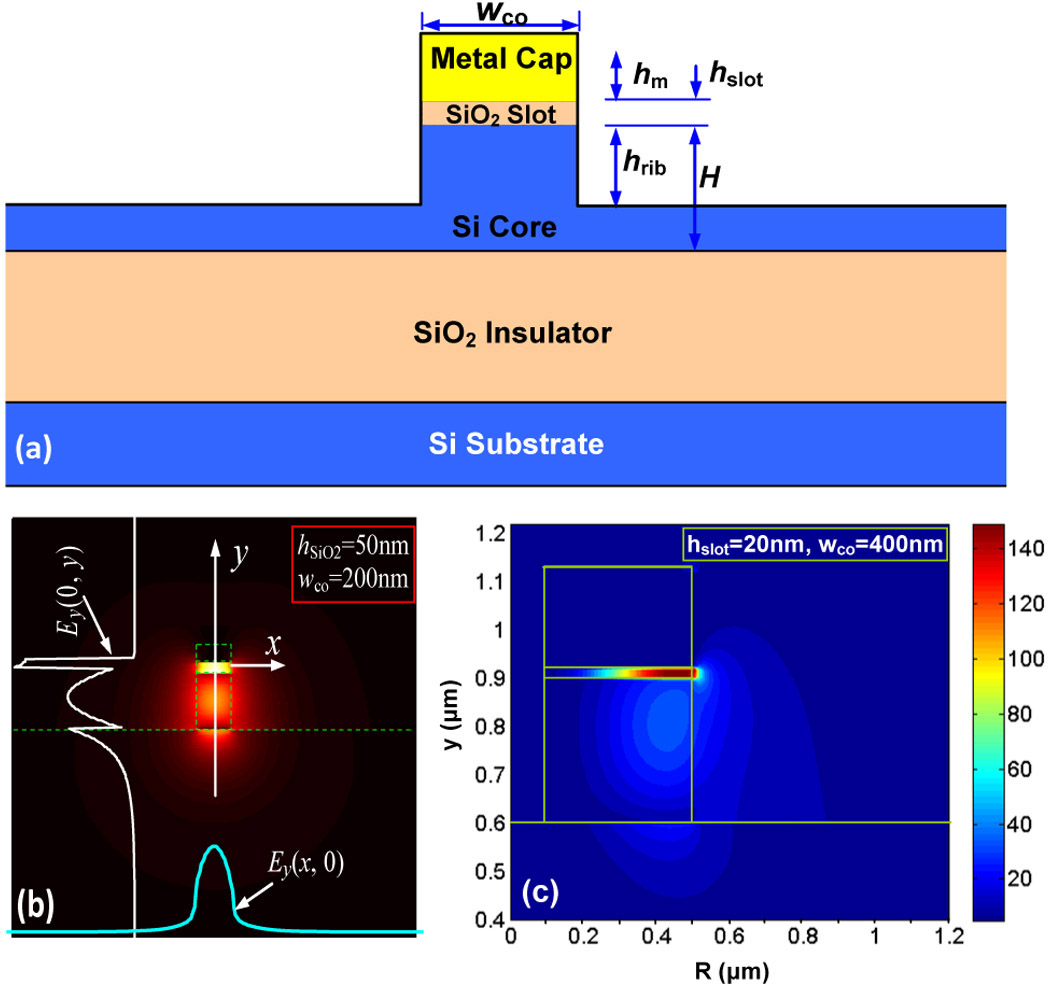 Figure 1. (a) Cross section of a silicon-on-insulator (SOI)-compatible hybrid plasmonic waveguide. Si: Silicon. SiO2: Silica. (b) Field distribution, Ey(x, y) of the hybrid plasmonic (TM0) mode. (c) Field distribution, Ey(x, y) when the bending radius (R) is 500nm. Light can be confined well in the slot region even when the bending radius is reduced and about one-third of the operation wavelength. w: Width. h: Height. H: Total thickness of the top silicon layer.

Transverse electric-pass (TE) or transverse magnetic-pass (TM) polarizers with ultra-small footprints13 use the enhanced polarization-dependent loss of Si hybrid plasmonic waveguides, which arise because the TE- and TM-polarization modes have different optical field profiles, cutoff conditions, and intrinsic metal losses (for the un-cutoff modes). We have developed novel ultra-small TE-pass and TM-pass optical polarizers with special grating structures.14, 15 Our TM-pass polarizer consists of a Si grating with a narrow metal strip on the top, as shown in Figure 2(a). In this structure, the hybrid plasmonic (TM0) mode is ‘bounded’ to propagate along the metal strip so that the Si grating does not introduce any significant scattering or reflection loss. In addition, the launched TE polarized light—see Figure 2(b)—is reflected efficiently by the grating structure (designed for TE polarization) when it is at the Bragg wavelength. A 4.8μm TM-pass polarizer has an extinction ratio of about 22dB and an excess loss of 1.1dB at the central wavelength. For an extinction ratio greater than 20dB, the bandwidth can be up to about 50nm. 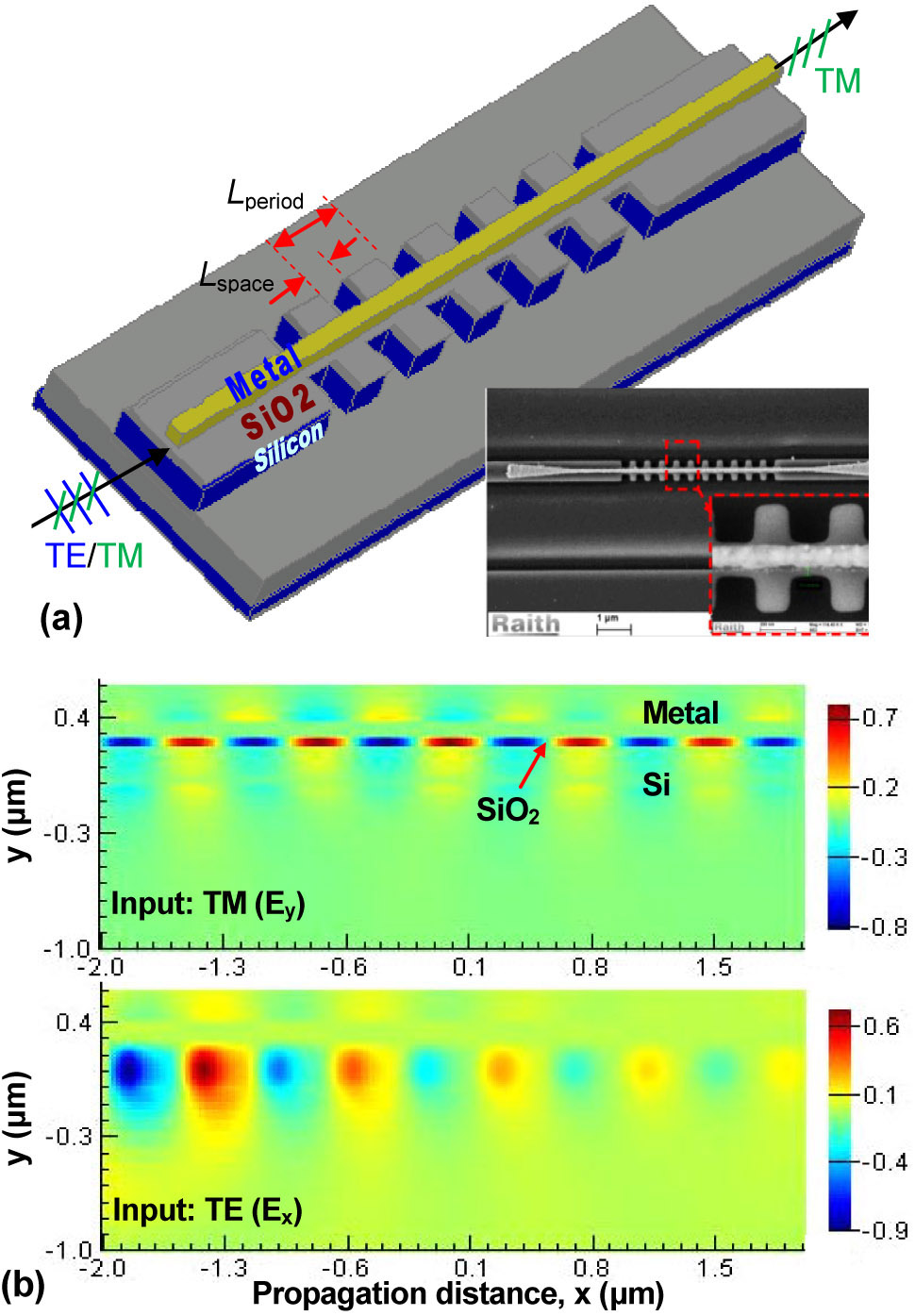 Figure 2. (a) Configuration of the transverse magnetic-pass (TM) polarizer. This is based on a silicon grating with a narrow metal strip on the top. Inset: Scanning electron microscopy (SEM) image of the fabricated device. (b) Light propagation (field distribution) in the designed polarizer. L: Length. TE: Transverse electric-pass polarizer.

Our modified TE-pass optical polarizer, with a grating that works for TM polarization, is shown in Figure 3(a).15 We form this grating by periodically modulating the thickness of the low-index SiO2 nanoslot and the incident TM-polarized light that is reflected when operating at the Bragg wavelength. In contrast, the TE-polarized light propagates—see Figure 3(b)—and is emitted with low scattering/reflection loss. For a 3.1μm TE-pass polarizer, the extinction ratio can be as high as 18dB, the excess loss is about 0.76dB, and the bandwidth is up to 200nm (for >15dB ratio). 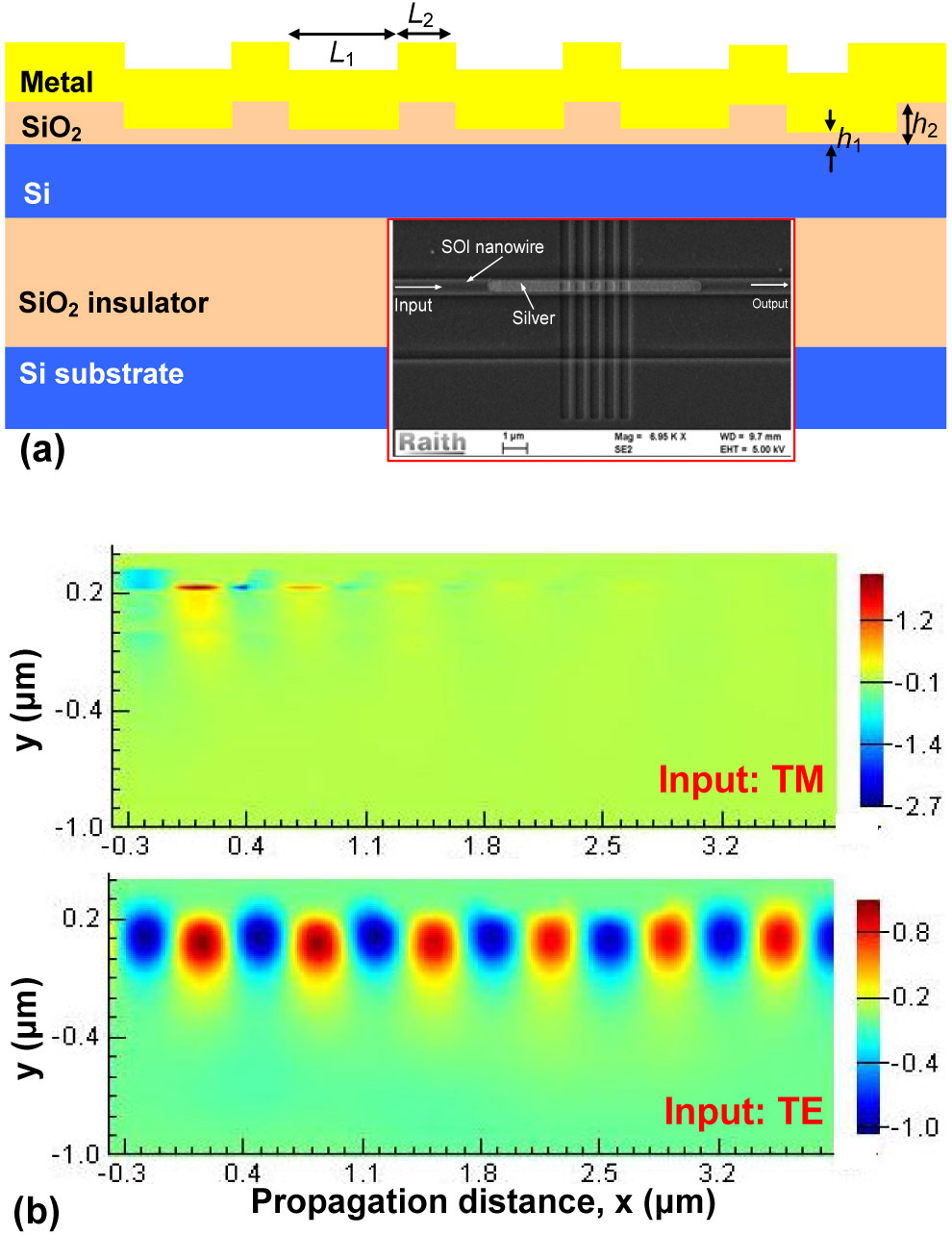 Figure 3. (a) Configuration of TE-pass polarizer, with a grating set up for TM polarization. Inset: SEM image of the fabricated device. Light propagation (field distribution) in the designed polarizer is shown in (b).

We have developed ultra-compact PBSs by combining a special structure design for the PBS device with our Si hybrid plasmonic waveguides, e.g., those based on asymmetrical directional couplers (ADCs)16, 17,20 and special multimode interference (MMI) structures.18 The SOI compatibility of our waveguides means that a simplified ADC can be conveniently formed by combining a SOI nanowire and a Si hybrid nanoplasmonic waveguide.17 In our design—see Figure 4(a)—the widths of the two waveguides are chosen so that the phase-matching condition is satisfied and TE polarization has about 100% cross-coupling. We use sub-wavelength bending, based on the Si hybrid nanoplasmonic waveguide, as a polarizer to improve the extinction ratio. Our designed PBS has low excess loss and a large bandwidth (greater than 120nm) for an extinction ratio of more than 12dB. We have also designed an extremely small (2.5μm long) PBS—see Figure 5(a)—which uses a novel MMI structure, covered by a metal strip, as a narrow Si hybrid nanoplasmonic waveguide.18 In this design, the TM0 modes in the input and MMI sections are very similar, and the TM0 mode in the MMI section is mainly excited so that there is almost no MMI effect. As a result, the TM-polarized light is mainly emitted from the through-port. In contrast—when the MMI length is optimized—a mirror image of the TE polarization is formed at the cross-port. This is because there is no hybrid nanoplasmonic effect and because more than one mode in the MMI section is excited, as shown in Figure 5(b). For this PBS, we achieve excess losses of only 0.32 and 0.88dB for the TE and TM polarizations, respectively, and a bandwidth of about 80nm for an extinction ratio of more than 10dB. 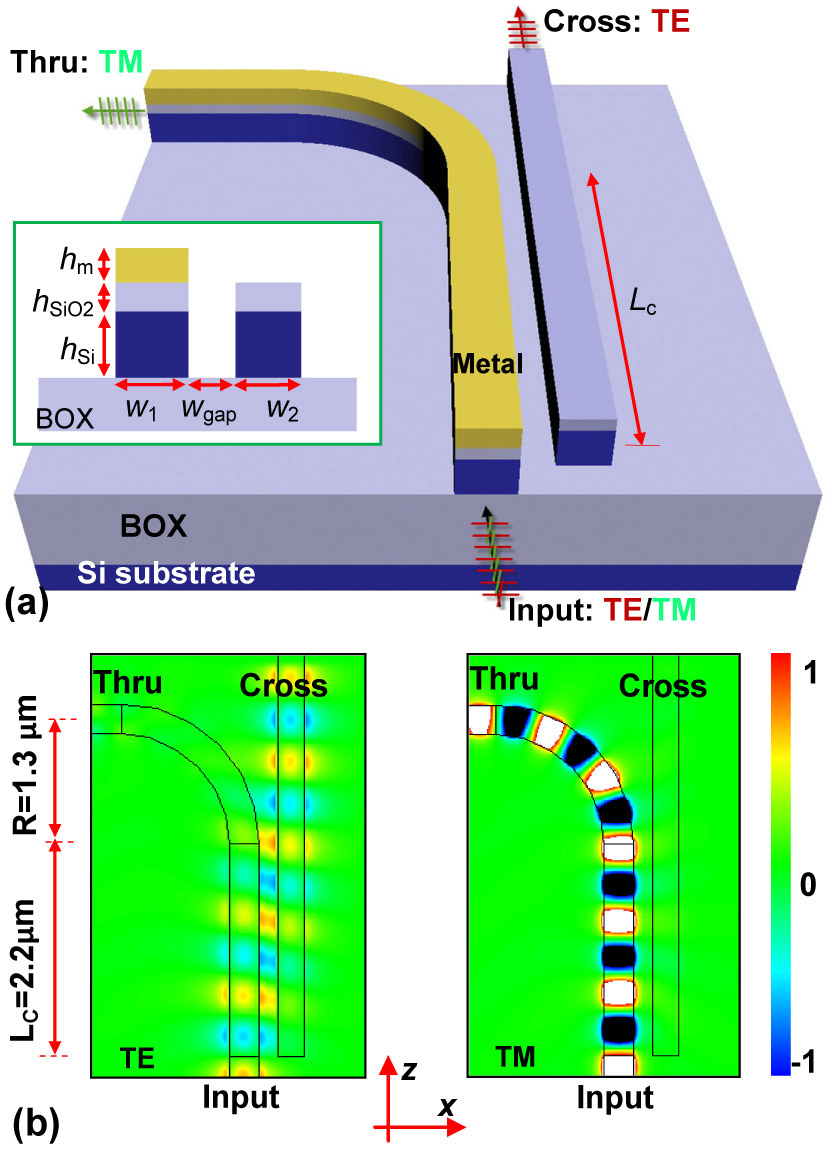 Figure 4. (a) Polarization beam splitter (PBS) based on an asymmetrical directional coupler (ADC) with a silicon hybrid nanoplasmonic waveguide. (b) Simulated light propagation from this device. The coupling region (Lc) is as short as 2.2μm even when the gap is as large as 200nm (for easy fabrication). There is little coupling for the TM-polarization mode because of the significant phase mismatching. 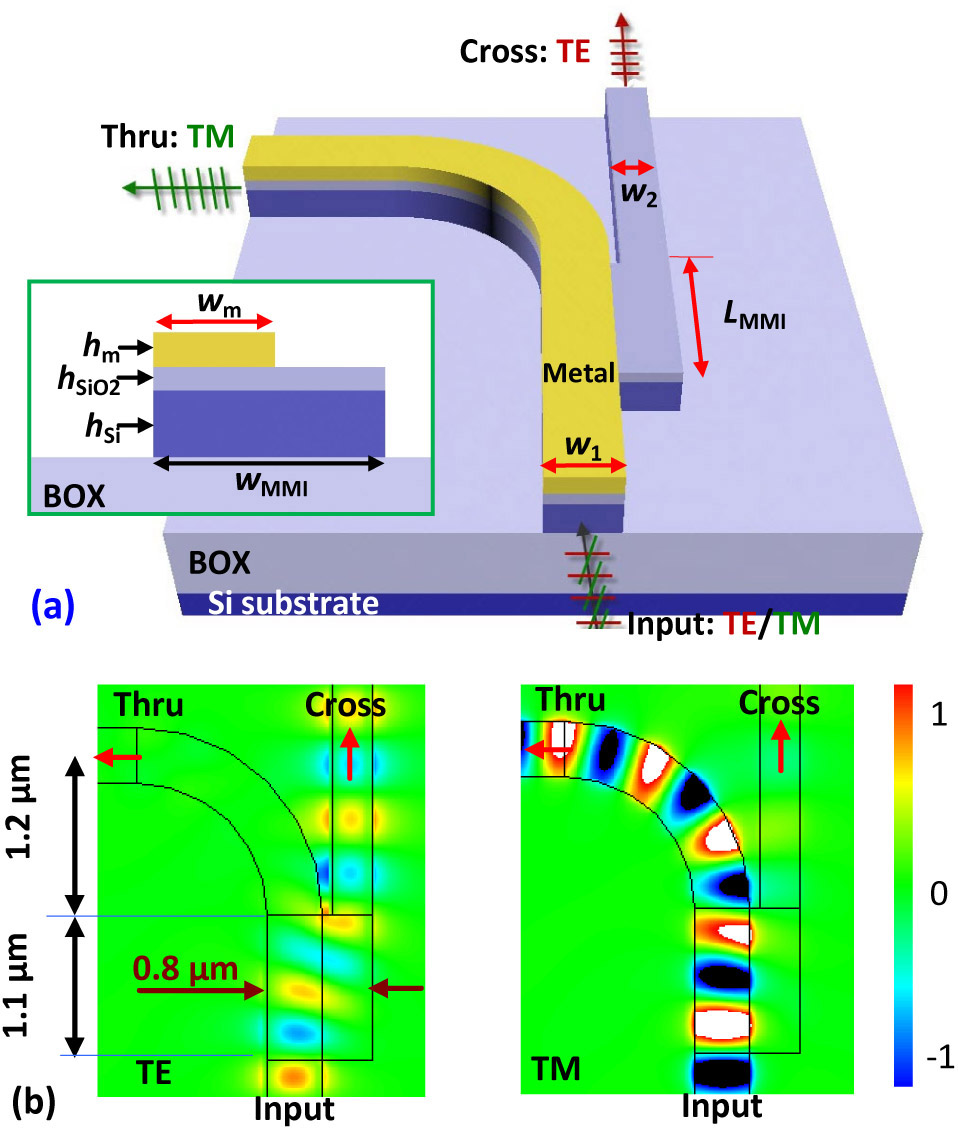 Figure 5. (a) PBS based on a multimode interference (MMI) structure, with a metal strip. (b) Simulated light propagation from this device.

We have developed SOI-compatible hybrid plasmonic waveguides in recent years that enable nanoscale light confinement, sub-micrometer bending, and long-distance guided-wave propagation. We have therefore been able to realize several hybrid nanoplasmonic integrated devices with sub-micron footprints, i.e., extremely small on-chip polarization-handling devices (polarizers and PBSs). Si hybrid nanoplasmonic waveguides are also a promising platform for energy-efficient fast thermal tuning with a large thermal dynamic range. We are now working to improve the intrinsic loss associated with our devices. A potential option is to use the Si hybrid plasmonic waveguides locally, together with low-loss SOI nanowires.

Daoxin Dai received a BEng from Zhejiang University in 2000, and a PhD from the Royal Institute of Technology, Sweden, in 2005. He has been a professor since 2011 and has published more than 110 papers in international journals.

Xiaowei Guan received a BEng from Southeast University, China, in 2009 and his PhD from Zhejiang University in 2014.

Hao Wu received a BEng in 2013 from Zhejiang University, where he is currently working toward his PhD.