Eyewear projectors overlay computer-generated visual data on real-world images, providing immediate, hands-free access to information. In the future they will enable augmented-reality wearable computers, providing a visual guide by analyzing a camera image to offer a smart interactive map. Applications of these projectors are likely to be commercialized in the next decade, and the devices will require highly compact image displays.1,2

There are broadly two types of displays suitable for wearable projectors. The first, the liquid-crystal display (LCD), is a component of conventional projectors and enables an eyewear system if miniaturized.3 However, focusing an image onto the user's eyes without an accurate lens system presents a significant challenge.

The second type, the laser image display,1 comprises laser sources, a multiplexer (a beam combiner), and a beam scanner. The laser sources emit red-green-blue (RGB) light, which the multiplexer combines into a single beam. The laser scanner then scans the combined beam onto the retinal screen, obtaining a color image. The process requires no focusing with a lens because we can obtain the image simply by scanning the laser beam. However, realizing such a compact display is difficult because combining the RGB laser beams requires a complicated lens and mirror system. Thus far, it has not been possible to reduce the size of the display.

We have fabricated a new ultracompact RGB laser beam combiner4,5 that is the size of a grain of rice (see Figures 1 and 2). The combiner comprises three optical waveguides for RGB light inputs and three directional couplers. The couplers can switch and exchange the light beams from one to the other, so that we obtain the combined output light from the center waveguide. 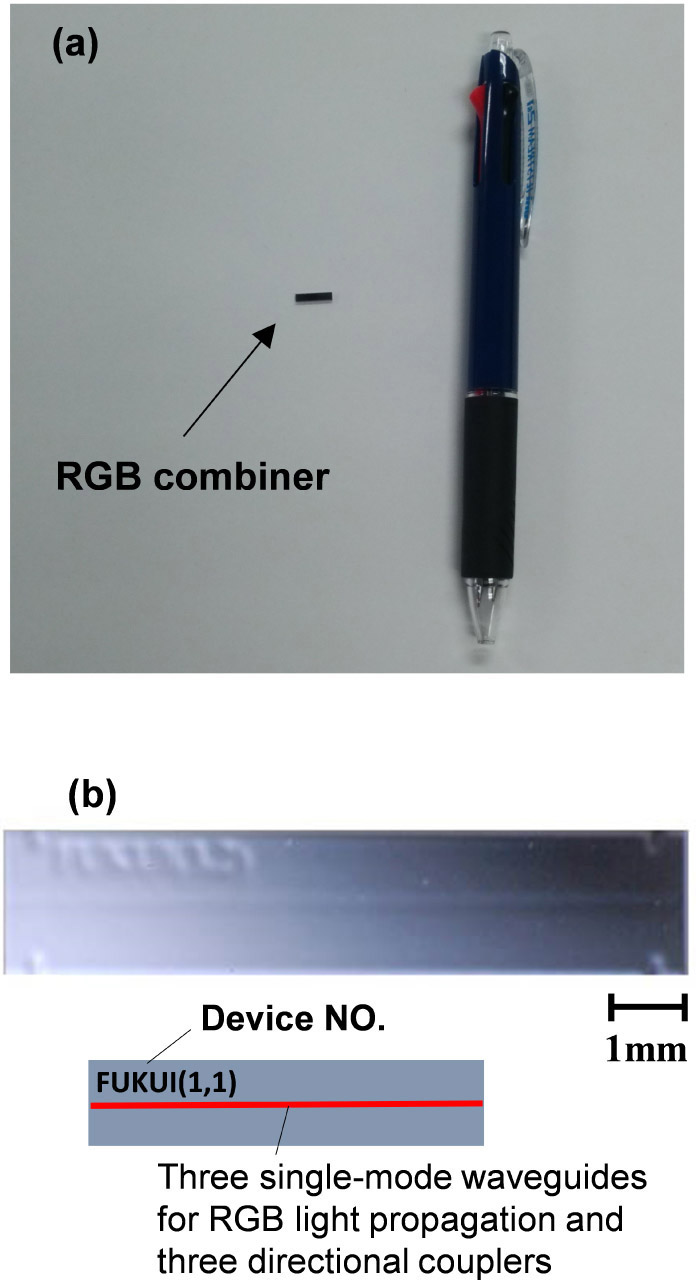 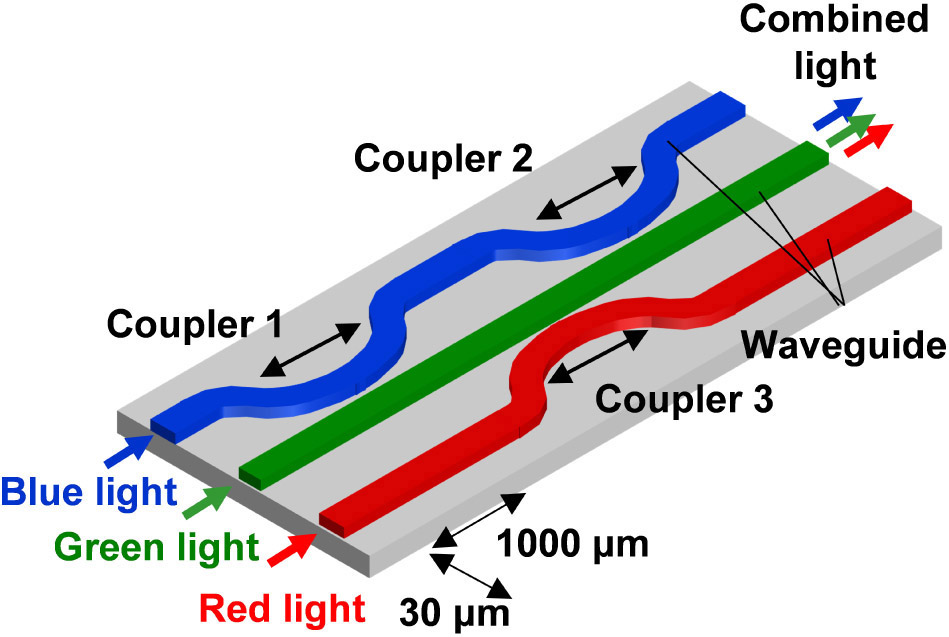 When the device is operating, green light enters from the straight center waveguide. We place two couplers of the same length (numbered 1 and 2) along the left waveguide where the blue light enters, and one further coupler (numbered 3) along the right waveguide where the red light enters. The position sequence of the three directional couplers is an important feature of the structure. We positioned coupler 3 between couplers 1 and 2, since this is the only configuration that obtains a high output efficiency.

Figure 3 shows the actual laser beam transmission path in the form of simulation results. The red light that enters from the right waveguide changes its path and finally propagates along the center output waveguide: see Figure 3(a). The green light that enters from the center changes its path to the left and then comes back to the center: see Figure 3(b). The blue light that enters from the left waveguide divides into the left and center and then joins at the center: see Figure 3(c). Finally, each RGB light joins together at the center output waveguide. The averaged output powers for the RGB lights are as high as 96% of the input. In addition, that output power shows no polarization dependence when we use waveguides with square cross sections, and the combiner is robust with respect to wavelength deviation in the laser sources. Figure 4 shows the wavelength dependence of the output power for each RGB light, which is estimated by simulation. The output powers remain above 85% for wavelength deviations of ±10nm, showing that the system has a high tolerance for wavelength variation. 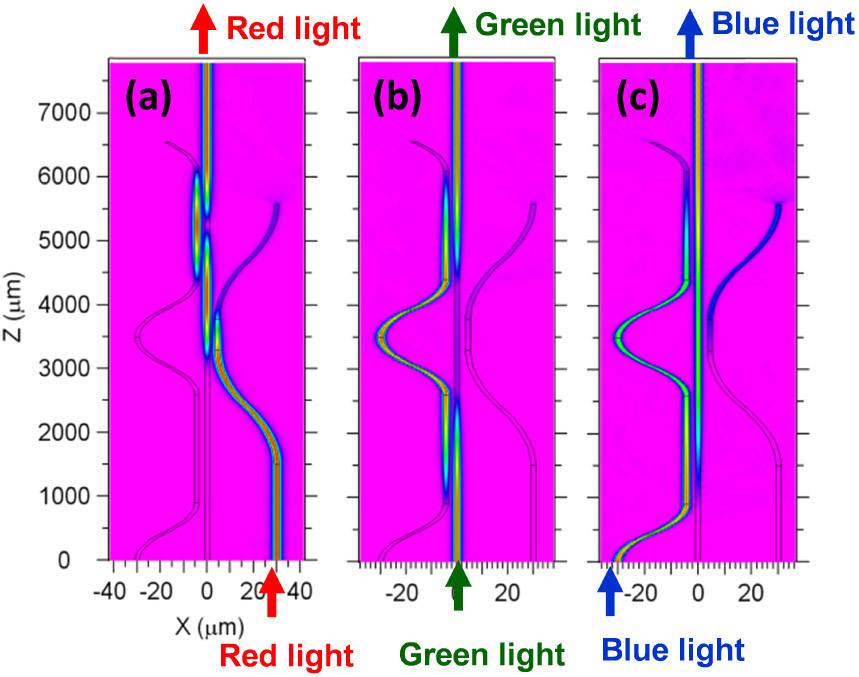 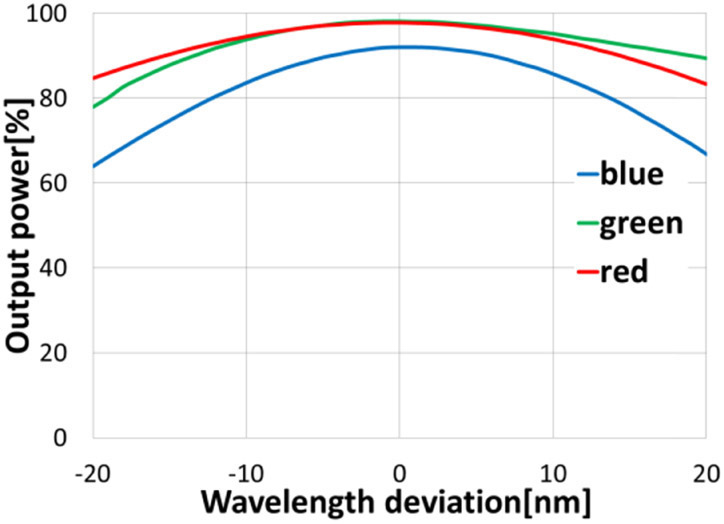 Figure 4. Wavelength vs. output power for the RGB laser beam combiner. The device has a high tolerance for deviation in laser source wavelength.

We have produced a prototype of the combiner using a conventional microfabrication technique on a silicon substrate (see Figure 1). At 0.06×7.8mm in size, the combiner is one order of magnitude smaller than a conventional mirror-type equivalent.5 With this level of miniaturization, our RGB combiner is suitable for use in compact image displays such as eyewear projectors.

In future work, we will seek to realize an extremely compact optical engine for a laser projector by integrating the DC-type combiner with RGB semiconductor laser chips on a silicon substrate platform. We will then attach a microelectromechanical system mirror to the integrated RGB laser sources with a combiner. Such a compact optical engine would provide a key component for eyewear projectors, enabling a step toward realizing augmented-reality wearable computers.

Toshio Katsuyama received a PhD from Tohoku University in 1983. He later worked in the central research laboratory at Hitachi Ltd. and was a visiting professor at the University of Tokyo. His research interests include fabrication and characterization of opto-electronic devices.

Akira Nakao received a BEng in electrical and electronics engineering in 2013. He is now a post-graduate student at the Graduate School of Engineering.

Kosuke Ogawa received a BEng in electrical and electronics engineering and is now a post-graduate student at the Graduate School of Engineering.