Terahertz radiation, with frequencies of 0.3–10THz, displays several unique characteristics. For instance, this radiation (also known as T-rays) can be transmitted through materials that block IR and visible light (e.g., plastics, ceramics, and paper), and can be used to identify chemical or biological substances that have strong terahertz absorption signatures. T-ray sensors have a number of potential applications in a variety of industries. They would be useful in the manufacturing industry for improved quality control and for the protection of soldiers and civilians from chemical/biological attacks in the defense industry. In addition, T-ray imagers could be used in the medical industry for dental cavity screening, or for the identification of cancerous skin and tissue. A major technological breakthrough, however, is still required to make these applications a reality. Terahertz radiation sources are bulky, complex in design and operation, and expensive to manufacture, but real-world spectroscopy and imaging applications require sources that are compact, cost-effective, that emit radiation with high spectral purity and high power, and that can be tuned over a wide wavelength range.

Semiconductor terahertz sources are an appealing solution to this problem, given their compact size and ruggedness, simple electrical-powered operation, and propensity for mass production. Many commercial sources (e.g., multiplier chains, photomixers, and photoconductive switches), however, experience a rapid drop in terahertz power at frequencies greater than 2THz because of conversion efficiency and carrier velocity constraints. Quantum cascade lasers (QCLs) are a class of compact, semiconductor lasers that are made up of hundreds of repetitions of quantum wells and barriers. The processing steps and materials that are used in their construction are almost identical to telecommunication diode lasers. QCLs can therefore be mass-produced in existing telecom diode foundries.1 Traditional terahertz QCLs, however, can only operate at cryogenic temperatures, and they have inherently small tuning bandwidths.

We have developed room-temperature electrically pumped sources that operate in the 1–6THz range using QCLs.1–7 In our approach, we leverage the performance features (i.e., the ability to operate with high power at room temperature) of mid-IR QCLs (with wavelengths of 5–12μm). We use difference-frequency generation (DFG) in mid-IR QCLs on indium phosphide (InP) substrates to create the room-temperature terahertz sources.1–7 Terahertz DFG is a nonlinear optical process, in which two light beams (at two different frequencies, ω1 and ω2) interact with a nonlinear optical medium to generate radiation at a frequency equal to the difference between ω1 and ω2 (see Figure 1).2,3 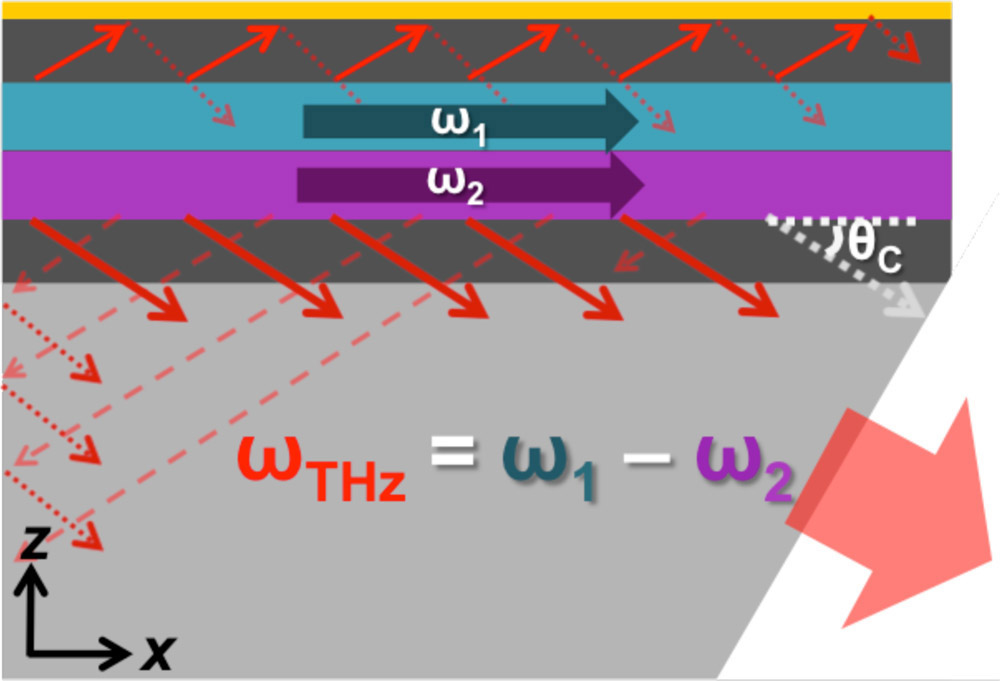 Figure 1. A Cherenkov emission waveguide scheme for a difference-frequency-generated (DFG) quantum cascade laser (QCL) device. The active region is blue, the mid-IR pumps are purple, the indium phosphide substrate is light gray, and the terahertz waves are shown in red. Two mid-IR beams with frequencies ω1and ω2 interact in the nonlinear optical medium to generate radiation at terahertz frequencies (ωTHz). θC: Angle of Cherenkov emission, with respect to the propagation direction of the mid-IR pumps.

We have designed the active regions of our terahertz DFG-QCL sources to support lasing at two mid-IR frequencies separated by as much as 6THz, and to lase with a wavelength of about 9μm. We have also quantum-engineered the laser active region to have giant optical nonlinearity that is two to four orders of magnitude larger than more commonly used nonlinear crystals. We achieved this by tailoring the energy separation of the confined quantum well states, which are involved in the nonlinear interaction, to coincide with the energy of the mid-IR pumps.2, 5 In our sources we use a Cherenkov emission waveguide configuration that we have adapted for terahertz DFG-QCL technology.4 The Cherenkov emission is characterized by nonlinear material radiating terahertz waves into the device substrate at an angle to the propagation direction of the mid-IR pumps (see Figure 1). This scheme is well suited for broadband terahertz output, given that the phase-matching conditions can be satisfied from 1 to 6THz. We grow our devices on a semi-insulating InP substrate that satisfies the Cherenkov phase matching requirements and has a low terahertz absorption loss.4 We are able to couple the T-rays into free-space via a mechanically polished substrate output facet (see Figure 1).

Using our novel methodology, we fabricated sources into 22μm-wide ridge waveguides and cleaved the wafer into 2–3mm-long lasers. We realized single-frequency terahertz tuning by defining a monolithic diffraction grating in the device's upper waveguide layer that fixes one mid-IR pump at a particular frequency. We subsequently mounted a laser in an external cavity system—as shown in Figure 2(a)—with an external diffraction grating, which provided feedback for the second mid-IR pump. We can rotate an external diffraction grating to tune the second mid-IR pump frequency. The terahertz output from the device follows the difference between the two mid-IR pump frequencies. Our source is biased with 50ns-wide pulse widths and a 50kHz repetition rate. We have demonstrated that this room-temperature external-cavity tuned system5, 7 can provide continuously-tunable terahertz output in the 1.4–5.9THz range, with a 90μW peak power output. Terahertz emission spectra for different grating positions are shown in Figure 2(b). A record 4.5THz tuning bandwidth has been achieved with these devices.7

More recently, we demonstrated monolithic electrically tunable terahertz emission6 by writing two separate distributed gratings in the device waveguide. The front grating operates as a distributed feedback (DFB) grating, while the back grating operates as a distributed Bragg reflector (DBR) grating. These gratings enable us to fix mid-IR pumps at two different frequencies, as shown in Figure 3(a). We etched a trench between each grating section to electrically isolate them for independent mid-IR wavelength tuning. The QCL is pulsed-biased through the front DFB section, and an additional direct current bias can be applied to each grating section, to thermally tune their respective mid-IR pumps. Emission spectra from a device that tunes from 3.44–4.02THz is shown in Figure 3(b). The tuning range of 580GHz (3.44–4.02THz) is the largest single-mode monolithic tuning that has yet been demonstrated using a semiconductor source in this frequency range.

Figure 3. Illustrating the monolithic tunable device. (a) A schematic diagram of the device. (b) A typical terahertz tuning spectrum from the device. (c) Photograph of the terahertz DFG-QCL chip that contains several tunable laser sources. DC: Direct current.

We have developed a new approach to the design of terahertz radiation sources. Our devices provide, by far, the largest tuning bandwidth for terahertz semiconductor sources, and they can be produced in mass quantities at existing diode laser foundries. By combining our devices with pyroelectric or heterodyne-based terahertz detectors, we envision the development of highly compact semiconductor-based terahertz systems for chemical and biological sensing, spectroscopy, and materials inspection applications. In our ongoing research we are investigating ways to further increase the power output of our devices. These include improving the terahertz outcoupling (we estimate that nearly 90% of the generated terahertz radiation currently gets trapped inside the QCLs), and implementing active regions with stronger optical nonlinearity.

Karun Vijayraghavan is completing his PhD in electrical engineering in Mikhail Belkin's group, and is looking to work on the commercialization of terahertz DFG-QCL technology.

Yifan Jiang is a PhD student in Mikhail Belkin's group, where she works on the development of high-performance broadly tunable terahertz DFG-QCL sources.

Seungyong Jung has been a postdoctoral fellow in Mikhail Belkin's group since 2013. His research interests include mid-IR and terahertz optoelectronic devices and their applications.

Mikhail Belkin is an associate professor whose research interests are focused on mid-IR and terahertz photonics, nanospectroscopy, and nonlinear optics.