Organometal halide perovskites give bright electroluminescence in a diode structure.

Advances in perovskite-based photovoltaics have made waves in the semiconductor community. Five years ago, methylammonium lead trihalide, an organic-inorganic hybrid class of perovskite, was found to be useful as a light sensitizer in dye-sensitized solar cells.1 Developments in the past two years have pushed the efficiency of perovskite solar cells above 15%,2–4 rapidly reaching a performance close to that achieved by traditional semiconductors such as silicon and copper indium gallium selenide. These hybrid perovskites possess distinct advantages over traditional semiconductors, due to their easy solution processing and relatively few exacting requirements (e.g., they do not require high temperatures or a vacuum). In addition, these perovskite components are low cost and abundant.

In recent collaborative work with groups at the University of Oxford and LMU Munich, we have shown that, in addition to their use in solar cells, perovskites can be very effective as the emissive layer in a diode structure.5 We have also found their light emission to be tunable across a range of colors, making organometal halide perovskites useful for a variety of display, lighting, and optical communication applications.

In our perovskite LED (PeLED) design, we sandwiched a thin layer of mixed iodide-chloride perovskite (CH3NH3PbI3−xClx) between titanium dioxide (TiO2) and polyfluorene (F8): see Figure 1. These large-bandgap semiconductors form a double heterostructure with the perovskite and act as charge-blocking layers. We used a 15nm perovskite layer to spatially confine the charges and thereby enhance the electron-hole capture process. Given the low exciton binding energy in perovskite semiconductors, this design is particularly useful for the radiative recombination of injected charges. Molybdenum trioxide and the TiO2 also provide high and low work functions, respectively, for ohmic hole and electron injection. In this device, we obtained near-IR electroluminescence (EL) at 754nm, with a high EL radiance of 13.2W·sr−1m−2 at a current density of 363mAcm−2. Assuming a Lambertian emission profile, in which the radiant flux decreases by the cosine of the emission angle, this gives an external quantum efficiency (EQE) and internal quantum efficiency (IQE) of 0.76 and 3.4%, respectively. 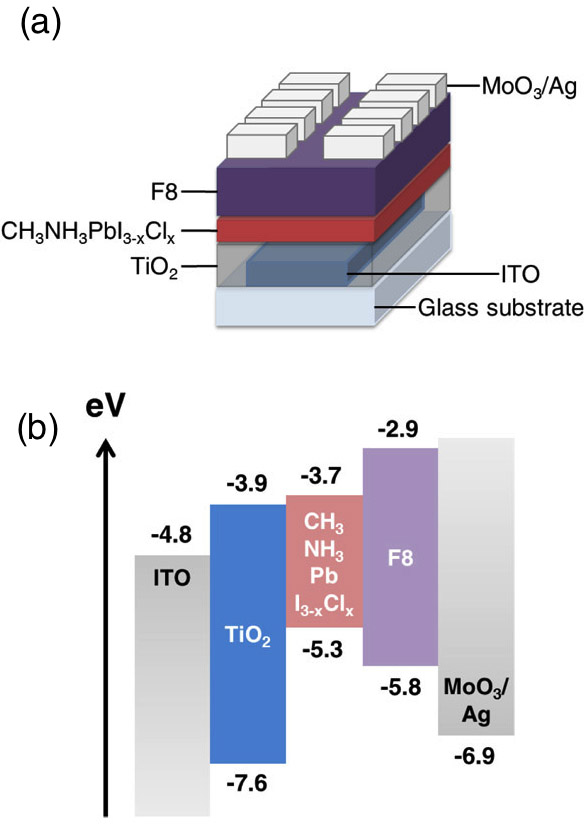 To demonstrate EL in the visible spectrum, we tuned the bandgap of the perovskites by replacing the iodide ions with bromide ions. Perovskites with CH3NH3PbBr3 (tribromide perovskite) and CH3NH3PbBr2I (mixed-bromide-iodide perovskite) compositions emit at green (517nm) and red (630nm) wavelengths, respectively: see Figure 2(a) and (b). In our green PeLED, we obtained a luminance of 364cdm−2 at a current density of 123mAcm−2, producing an efficiency of 0.3cdA−1, or an EQE of 0.1% and an IQE of 0.4%. 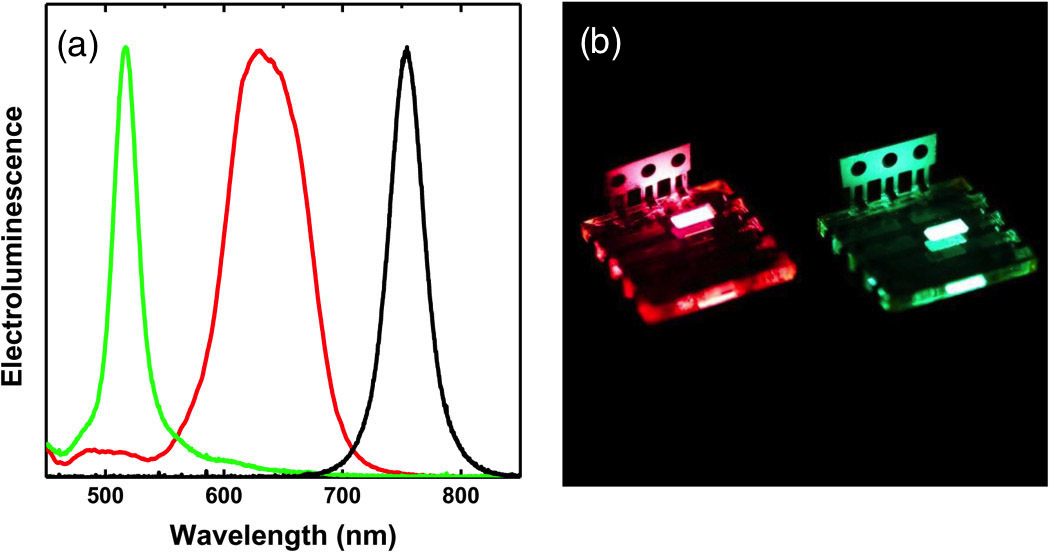 To ensure a high rate of electron-hole capture for radiative recombination, thinner emissive layers are required. However, incomplete layer coverage in these perovskite thin films often leads to electrical current shunts, which reduce the luminescent efficiency. A key strategy to improve light-emitting efficiency therefore involves either optimizing the film formation or developing a structure that blocks electrical shunting paths. We have also found the devices emit more efficiently at higher injection currents, showing that high charge densities are needed for efficient radiative recombination.

In summary, the bright EL produced by our device shows the hybrid perovskite materials to be a remarkable class of semiconductors with wide applicability in optoelectronic devices. We have demonstrated our perovskite LED can achieve a performance equivalent to or better than that exhibited by quantum dot devices.6 The relatively long carrier lifetimes and low lasing threshold densities in perovskites also show promise for electrical diode lasers,7 which we are now developing. Given the huge research interest in this emerging and rapidly developing field, perovskite optoelectronic devices such as ours may enter the industry market space relatively quickly.