Over the last decade, the concept of metamaterials has bestowed the role of ordinary constituents of matter (atoms, ions, or molecules) upon artificial ‘meta-atoms,’ small objects designed for certain physical properties.1 The freedom to choose the shape and composition of meta-atoms is nearly total, so it has been possible to obtain physical properties that don't exist or are very rare in nature.2

Prominent examples are hyperbolic metamaterials (HMMs), which feature an artificial anisotropy sufficiently extreme that the medium behaves as a metal in some directions and as a dielectric in others. In such media, the effective permittivity tensor

which characterizes the properties exhibited by the metamaterial, has components of different signs, e.g., εx=εyz>0. As a result, the dispersion relation determining the wave vectors of propagating waves changes topology from a bounded ellipsoid to an unbounded hyperboloid: see Figure 1(a). Thus, plasmonic waves with large wave vectors (volume plasmon polaritons, VPPs3), which are evanescent in natural media, become propagating in HMMs: see Figure 1(b). 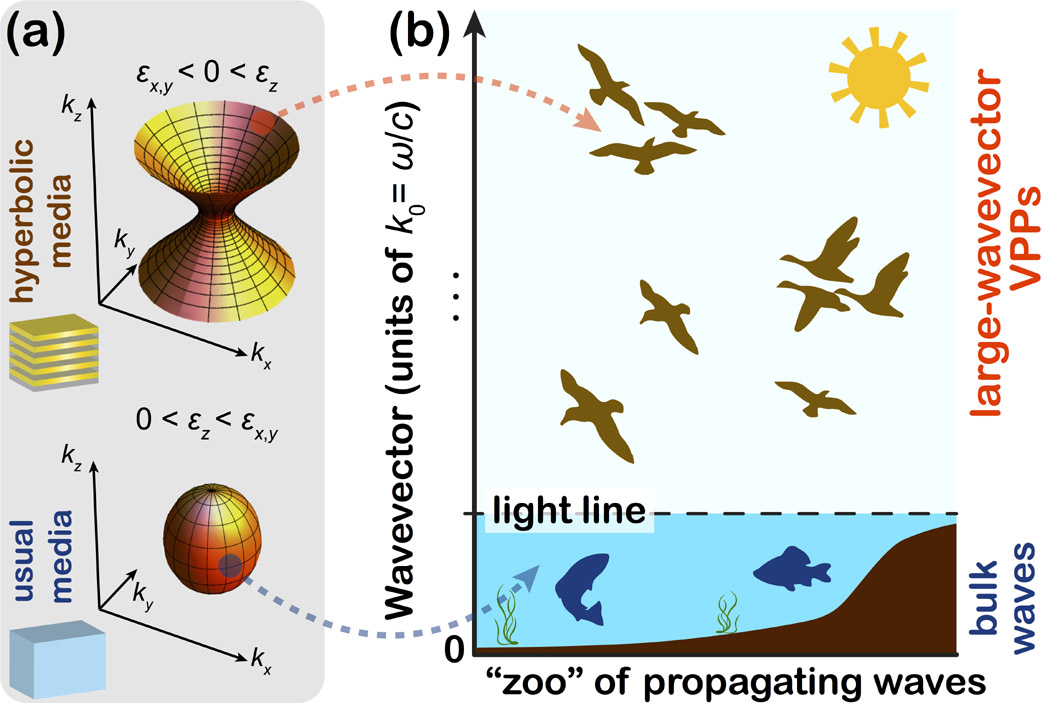 Thanks to VPPs, HMMs exhibit many pronounced physical effects such as broadband enhancement of the photonic density of states, super-Planckian black-body radiation, far-field optical imaging of subwavelength objects (hyperlensing), and super-absorption.4, 5

It is remarkable that hyperbolic dispersion can be achieved with relatively simple geometries, such as metal-dielectric multilayers.6 Such simplicity inspired us to explore whether the HMM functionality can be enriched by more sophisticated geometries. We have shown that moving beyond simple multilayer topology does indeed result in advanced functionality (such as selective control over propagating VPPs) and improved performance (such as increased broadband absorption).

Any fabricated multilayer inevitably acquires layer interface roughness. Roughness is particularly detrimental for the nanometer-thick layers required for most optical HMMs.7 We considered8 a multilayer HMM with roughness represented by fluctuations of the layers' thickness that is accumulated from layer to layer, mimicking realistic metal and dielectric deposition: see Figure 2(a). Our simulations show that the increased surface roughness leads to enhanced absorption compared to smooth-layered HMMs: see Figure 2(b).7 Moreover, the internal layer roughness further propels absorption beyond the already observed super-absorption in HMMs with a rough outer surface.9 Thus, moderate roughness keeps the main cause of ‘super-absorption’ in HMMs, namely the existence of VPPs, and in addition, creates further absorption mechanisms such as localized resonances: see Figure 2(a). Rough-layer HMMs can serve as broadband radiation absorbers for security and defense applications. 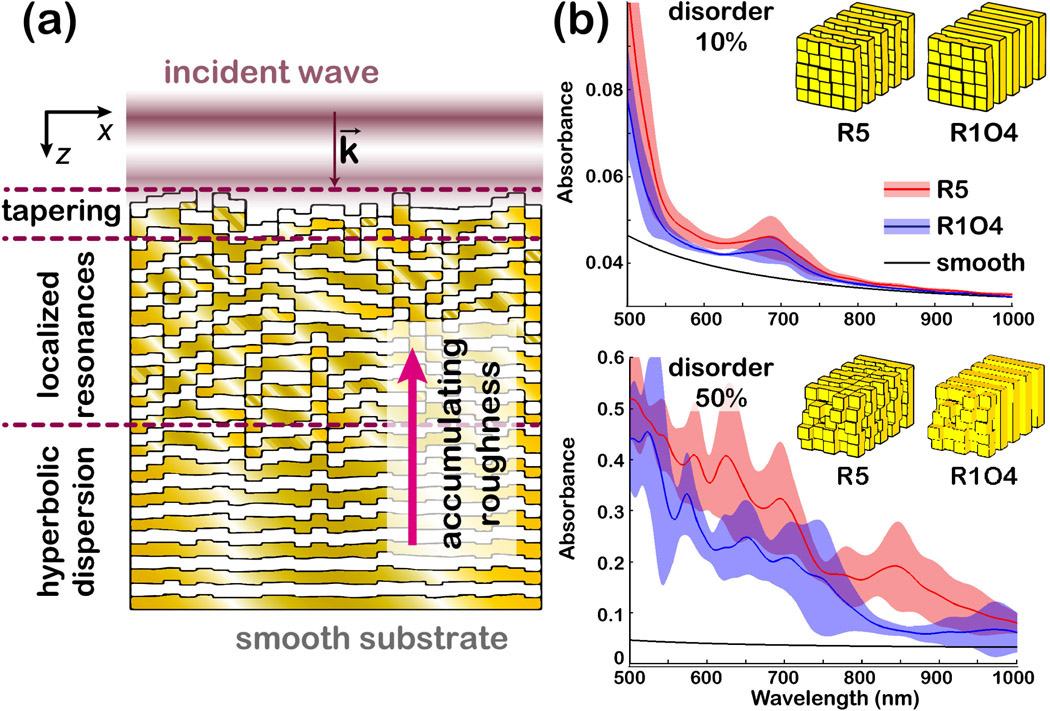 Figure 2. A ‘super-absorber’ based on hyperbolic metamaterials (HMMs) with corrugated layers:7(a) concept; (b) absorption spectra for corrugation present in the entire volume of the HMM (R5) or only on the surface (R1O4). Shaded areas represent standard deviation around the mean calculated over 5 realizations.

Another way to design a practically realizable HMM is to use building blocks of self-assembled monolayers deposited from colloidal solutions of nanoparticles. Polyelectrolyte coatings can be used both as support to stack several monolayers together and as spacers to separate individual monolayers by a controlled distance: see Figure 3(a). An HMM is realized by alternating layers of metal nanoparticles with those of semiconductor quantum dots, which also serve as emitting centers. By varying the spacer thickness between the nanoparticle and quantum dot layers, we found we can tune the structure into and out of the HMM regime—see Figure 3(b)10—and open a VPP band—the green stripe in Figure 3(c)—that increases quantum dot luminescence.11 The self-assembled nanoparticle monolayer platform is not only an alternative to conventional layer deposition techniques, but also a method of controlled incorporation of emitting centers inside the HMM, enriching options for studying the influence of HMMs on light-matter interaction processes. 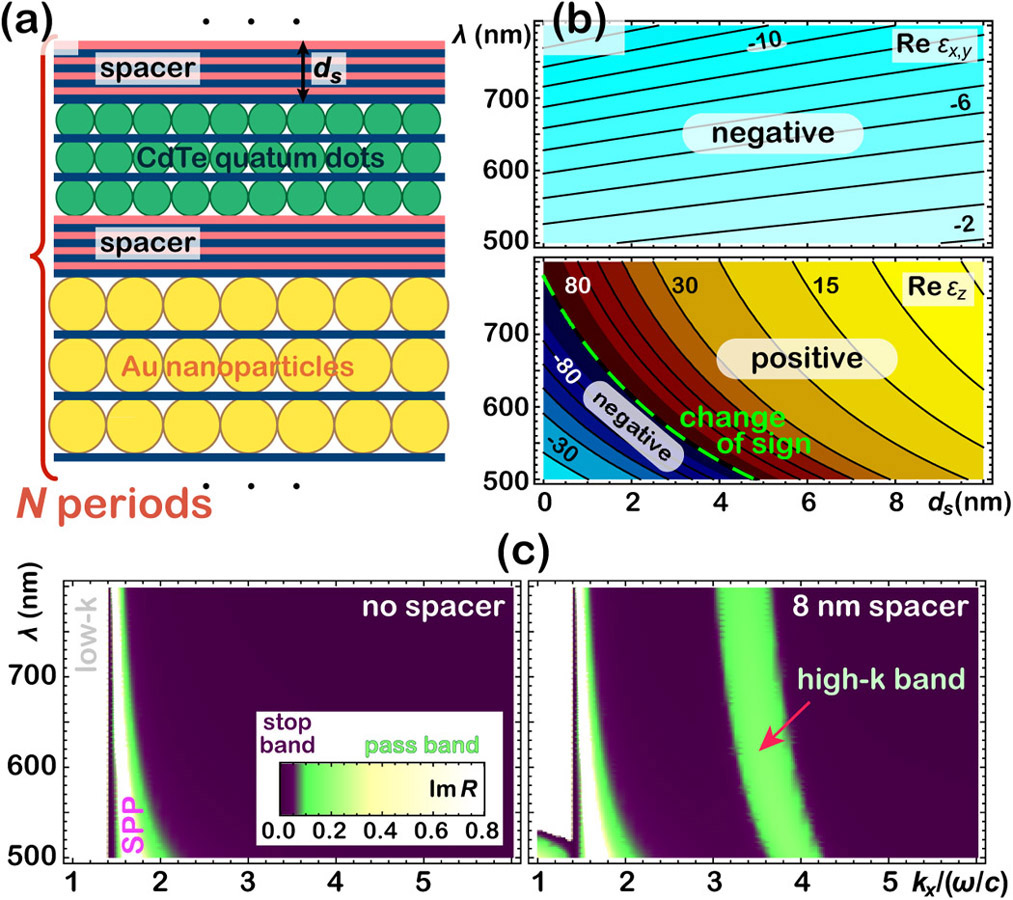 Figure 3. (a) Schematic of the nanoparticle monolayer assemblies as HMMs.10(b) Plot of effective permittivities Re εx, yand Re εzagainst spacer thickness ds. (c) A VPP band is signified by nonzero Im R (the imaginary part of the reflection coefficient for HMM at given kx and wavelength λ, equal to c/ω) and appears for ds= 8nm. CdTe: Cadmium telluride. Au: Gold. SPP: Surface plasmon polariton.

We also considered extending the basic metal-dielectric multilayer by modulating its properties, such as the thickness ratio between metal and dielectric layers: see Figure 4(a).12 The substructure, forming a periodic metal-dielectric multilayer, provides the hyperbolic dispersion necessary to support VPPs. The superstructure transmits some VPPs and reflects others by virtue of photonic bandgap effects similar to those in photonic crystals: see Figure 4(b). Moreover, we found that by making the superstructure geometry nonperiodic and transferring the principles of aperiodic photonic multilayers13 to plasmonic multilayer metamaterials, we could achieve significant freedom in VPP filtering: see Figure 4(c). In this way we made it easier to design hyperlenses with built-in corrective optical elements. 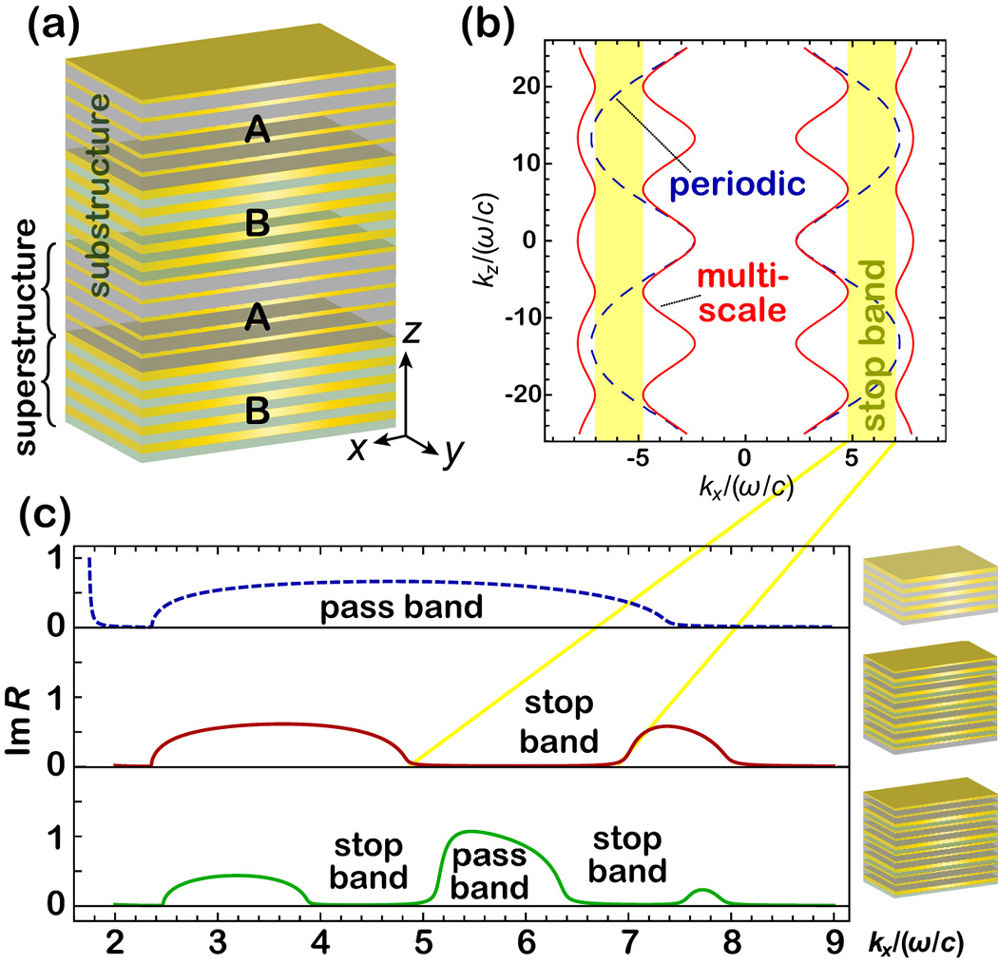 In summary, we have investigated the theory of three cases of hyperbolic metamaterials formed by metal-dielectric structures with geometries more complex than simple periodic multilayers. All structures retain basic HMM properties, but have their functionality extended in specific ways: increased absorption, radiative rate engineering of embedded quantum dot emitters, and wave-vector-based selective control over VPPs. As next steps, we intend to use new fabrication methods to make the HMM structures. These methods, such as atomic layer deposition or sandwiching of ultrathin gold layers between nanometer-thick organic adhesive spacers, are hitherto untried for HMM fabrication.

Discussions with A. Orlov, S. V. Gaponenko, and J. E. Sipe are acknowledged. The authors are grateful for support from the People Programme (Marie Curie Actions) of the European Union's 7th Framework Programme FP7-PEOPLE-2011-IIF under REA grant agreement 302009 (Project HyPHONE) and from the Danish Council for Independent Research via the GraTer project (0602-02135B).

Sergei V. Zhukovsky is a senior researcher at DTU Fotonik. His research interests include plasmonic and hyperbolic metamaterials, photonics, and multilayer optics.

Andrei Andryieuski is a postdoctoral researcher at DTU Fotonik. His research interests include metamaterials, plasmonics, and graphene.

Andrei V. Lavrinenko is an associate professor and leader of the Metamaterials group at DTU Fotonik. His research interests include metamaterials, photonic crystals and quasicrystals, photonic circuits, slow light, and numerical methods in electromagnetics and photonics.