Directed energy (DE) laser weapons have long been a staple of science fiction. Their realization remains elusive, however, despite decades of research spanning chemical, free-electron, and solid-state technologies.1 Recent advances in fiber laser technology promise to change this dynamic. By eliminating alignment-sensitive optics, fiber lasers can be packaged to operate reliably in harsh military environments, characterized by extremes of temperature, shock, and vibration. The electrical-to-optical efficiency of such lasers can exceed 40% and, by virtue of their wave-guided nature, they naturally emit light with near diffraction-limited beam quality. However, the power of state-of-the-art single-mode fiber lasers is limited by thermal and nonlinear effects to ∼10kW,2 an order of magnitude below the power required for most DE applications.

These power limitations can be bypassed by bundling together multiple fiber lasers in parallel. The US Navy is currently deploying a laser weapon prototype based on a multi-fiber bundle.3 However, simply bundling together multiple fibers results in a composite beam with poor beam quality. The laser energy from such a system spreads out quickly as it propagates to a distant target, limiting the effective range of the system. An alternate approach employs spectral beam combination, in which each fiber is operated at a slightly different wavelength and dispersive optics are used to combine the outputs. Although the resulting beam can be nearly diffraction limited, power scaling is constrained by the available source spectral brightness and laser gain bandwidth. To circumvent these issues, we developed scalable methods for coherent beam combining (CBC): see Figure 1. CBC enables the total power output to be increased while preserving the pristine beam quality that has become the hallmark of fiber lasers.4 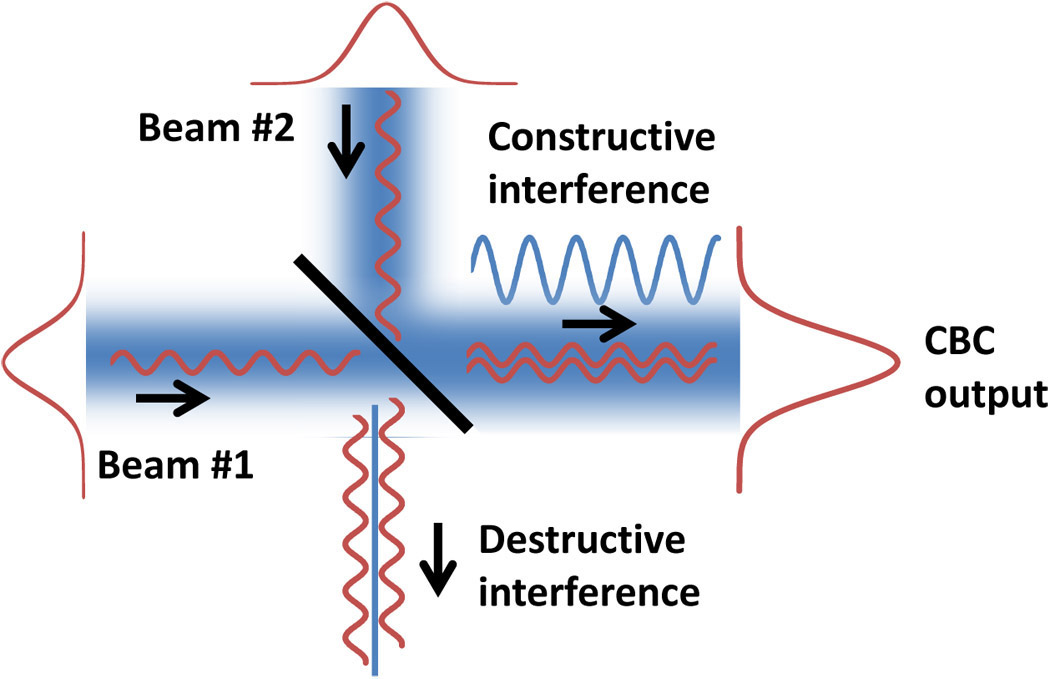 Figure 1. The coherent beam combining (CBC) of two beams, using a 50% reflective beam splitter. All input power can be directed to one of the two output ports by locking the beams in phase so that they constructively interfere, thereby doubling the power and brightness of the output beam.

In CBC, if two mutually coherent laser beams are incident on a 50/50 beam splitter, both beams can be combined into one output port, as long as they are locked in phase. The resultant combined beam has the same quality as each input, but with double the power and brightness. By cascading multiple two-port combiners, or by using beam splitters with more than two ports, this concept can be generalized to more than two lasers. Beyond demonstrating the basic principles and scalability of fiber CBC, our aim is to move the technology out of the laboratory by developing a robust, affordable, and compact design for fiber CBC.

In our architecture (see Figure 2), a master oscillator is split to seed N fiber channels, which each consist of telecom-style actuators for phase, polarization, and path length, followed by a kilowatt-class fiber amplifier chain.5 The tight confinement of light within these narrow fiber cores imposes nonlinear limits on the combinable fiber powers. The most detrimental among these nonlinearities is stimulated Brillouin scattering (SBS), in which laser light reflects from time-dependent optical density variations in the fiber core, limiting the output power and potentially damaging components at the fiber input ends. We eliminated SBS by applying phase noise to modulate the seed source line width to 30GHz. The resulting short coherence length prevented SBS reflections, but necessitated active matching of fiber amplifier lengths to within ∼1mm for efficient CBC.6 Another nonlinear impairment—self-phase modulation (SPM)—limits the combining efficiency by converting high-frequency intensity noise into uncorrectable phase noise, reducing coherence and imposing combining loss. These SPM losses can be managed by using large mode area fiber designs, minimizing fiber lengths, and eliminating non-common path intensity noise.

To launch light into free space, we mounted the kilowatt fiber tips into a close-packed, thermally stable array. A spherical mirror simultaneously collimates and images the array onto a reflective diffractive optical element (DOE). In this case, the DOE—which has essentially the same power handling as a typical high-energy laser mirror—is a multi-port beamsplitter with a lithographically-etched, periodic-surface-relief, low-angle structure. When illuminated by N phase-locked input beams at angles matching the DOE diffractive orders, the DOE can function as a beam combiner. To enable servo locking of the fiber phases, polarizations, and path lengths, we sent a single beam sample of the combined output to our P3 controller. The use of coherent detection enables scaling of the P3 controller to hundreds of fiber-laser channels with high control bandwidths, allowing for the rejection of vibrational disturbances that may be coupled from the environment or platform of operation.6, 7

In a recent test of our three-fiber prototype using this system architecture, we generated a near-diffraction limited 2.4kW beam with 3kW of input power (see Figure 3).5 The combining efficiency is independent of fiber power, demonstrating that there are no nonlinear or thermal limitations at kilowatt fiber power levels. This indicates that there is ample headroom for scaling to higher powers per fiber. 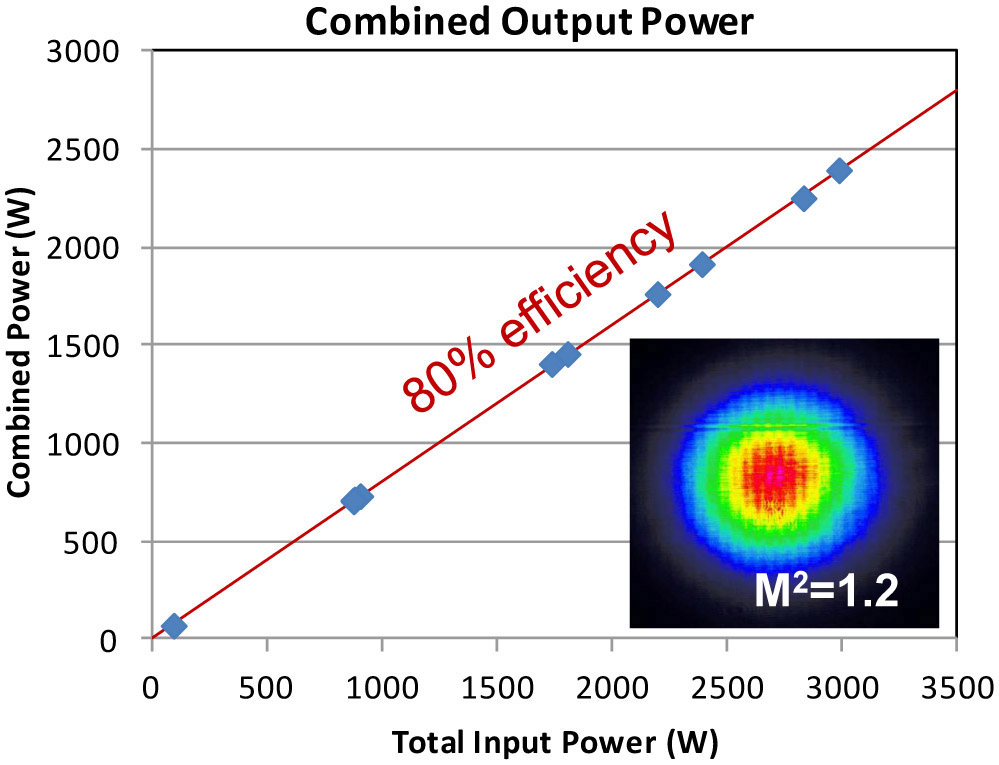 Two straightforward changes appear likely to increase the combining efficiency from 80% to 90% or more. First, combining more fibers increases DOE diffraction efficiency, leading to greater combining efficiency as well as higher combined power. We successfully fabricated DOEs with fiber channel counts ranging from 9–81, leading to diffraction efficiencies of 97–99%, compared with only 92% for our three-fiber DOE. Second, standardizing the design of the fiber amplifiers would reduce losses arising from mode field and power mismatches and should also be relatively simple.

In summary, our results show that the coherent combining of fiber lasers is an efficient scaling path toward 100kW-class DE lasers with diffraction-limited beam quality. By using only two common-path optics and a replaceable-element fiber array, our system architecture is suitable for harsh, non-laboratory environments. In principle, CBC has no intrinsic scaling limit on channel counts, but in practice, scaling will be dictated by engineering constraints of cost, complexity, and size. In this regard, further increases in coherent fiber powers combined with a 2D array and DOE geometry8 will enable scaling well beyond 100kW in compact packages. In future work, we hope to demonstrate packaged CBC fiber systems with unprecedented brightness and efficiency by combining more fibers with higher power per fiber.

Gregory Goodno is a senior scientist. For the past decade he has developed technologies for high-power solid-state lasers, fiber lasers, and beam combining.