Organic LEDs incorporating copper(I) emitters have been around for 15 years, but only now are these materials beginning to show very high efficiencies in electroluminescent devices.
08 October 2014
Daniel Volz, Thomas Baumann, Manuela Wallesch and Stefan Bräse

In recent years, displays based on organic LEDs (OLEDs) were successfully introduced into consumer electronics as a new, efficient means of converting electricity into visible light. However, the real potential of OLED technology has yet to be unveiled. The dream of using OLEDs for lighting, smart packaging, and other mass-market applications is still in the future, and in fact is even contradicted by the partial reliance of modern commercial OLEDs on metal-organic, phosphorescent iridium compounds as emitting materials. Iridium is one of the rarest metals in the earth's crust (abundance: 0.0003ppm).1 The reason people still choose it is efficiency. Using triplet harvesting (a technique for converting excitation energy into light), a theoretical efficiency of 100% can be achieved,2 whereas the maximum efficiency of classic fluorescent emitters (such as aluminum oxinate) is limited to 25% as predicted by quantum statistics (see Figure 1).3 Nevertheless, the high price, low abundance, and the special photophysical properties of iridium emitters hamper the manufacturing of affordable large-scale devices as well as the production of large quantities of OLEDs. Consequently, OLED displays have to date been restricted to high-price applications such as smartphones and tablet PCs.

Figure 1. Triplet harvesting and singlet harvesting. In an organic LED (OLED), electrical energy is transformed into so-called excitons. Due to quantum statistics, 25% of the excitons have singlet character, while 75% have triplet character. The triplet-harvesting approach (left) transforms all incoming excitons into triplet excitons and uses those to generate light (transition from T1to S0). The recently established singlet-harvesting approach (right) transforms all excitons into singlet excitons for the same purpose (transition from S1to S0). ΔE: Energy difference. kb: Boltzmann constant. T: Temperature.

Recently, however, new avenues to more abundant emitter materials have begun to open. The so-called singlet-harvesting approach4 (see Figure 1) allows for substitution of phosphorescent heavy-metal emitters with ones that use no metal at all5 or more abundant metals such as copper6 (abundance: 68ppm).1 The idea that copper(I) complexes are now seen as a new, promising class of emitters is interesting, considering that the first OLEDs incorporating such materials were announced mere weeks7, 8 after the groups of Forrest and Thompson published the two papers2, 9 introducing the triplet-harvesting approach back in 1999 (see Figure 2). Indeed, both material classes were published in well-known journals, e.g., Nature and Advanced Materials, so it is fair to say that the scientific community knew that it is possible to make OLEDs from both copper and iridium yet still favored the latter. The question is, why?

The first reason is processing. Back in 1999, vacuum processing was required to make efficient devices. However, many copper complexes cannot be sublimed (i.e., go directly from solid to gas, which is critical to vacuum processing) without destroying them. Although this issue was recently resolved,10–12 in the past it prevented acceptable performance using copper complexes. Apart from copper(I) complexes that can be sublimated, it is now also possible to process efficient devices from solution.

Second, choosing a new emitter means investigating the photophysics of the compound. For this, it is crucial to select a suitable sample form. Previously, most standard characterization was done by measuring solution samples because that was convenient and well established. However, these measurements give copper(I) complexes an intrinsic disadvantage vis-à-vis iridium because copper complexes often have very low efficiency in solution, whereas very good performance is achievable in the solid state.13

Third, key properties of the emitters were not understood. Singlet harvesting was discovered by Hartmut Yersin in 2011,4 more than 12 years after people started using copper complexes in OLEDs. Copper emitters were basically treated as if they were triplet-harvesting materials, which did not help in exploiting their true potential. Important factors such as potential efficiency losses due to triplet exciton diffusion were neglected until recently.14

Finally, design flaws in mononuclear cationic complexes of the type [Cu(N,N)(P,P)]+ (e.g., see the middle complex in Figure 2) constituted an additional obstacle.15,16 To date, around 35 studies have been published describing the use of copper complexes. Half of them reported incorporating this class of copper complexes without reaching very high efficiencies. While crystalline samples of this complex type usually are very efficient, the efficiency changes significantly when preparing thin films. One reason for this phenomenon was recently identified. Depending on the polarity of the solvent, partial dissociation may occur,15 which leads to the formation of quenching complexes (see Figure 3). A further factor is a very long emission decay time—greater than 30μs when [Cu(N,N)(P,P)]+ is doped into a host material14—resulting in saturation effects in OLEDs that reduce their efficiency and maximum brightness.

Figure 3. Nierengarten and coworkers15 showed that heteroleptic complexes [Cu(N,N)(P,P)]+ may dissociate in solution. Depending on the polarity of the solvent, greater or lesser amounts of species 1 and 2 degradation products are formed. Homoleptic complexes [Cu(N,N)2]+are in fact discussed as sensitizers in dye-sensitized solar cells and absorb in the visible region of light. Consequently, even small amounts of species 2 quench the emission of [Cu(N,N)(P,P)]+and reduce the efficiency of an OLED.

These effects can be bypassed simply by choosing materials that do not change their primary atomic structure during thin-film preparation and that have more suitable photophysical properties. Figures 4 and 5 provide examples that have been published by the groups of Osawa,17 Adachi,14 and Deaton,18 and by our group.6, 19,20 These materials have enabled very high efficiencies (between 15 and 16%). 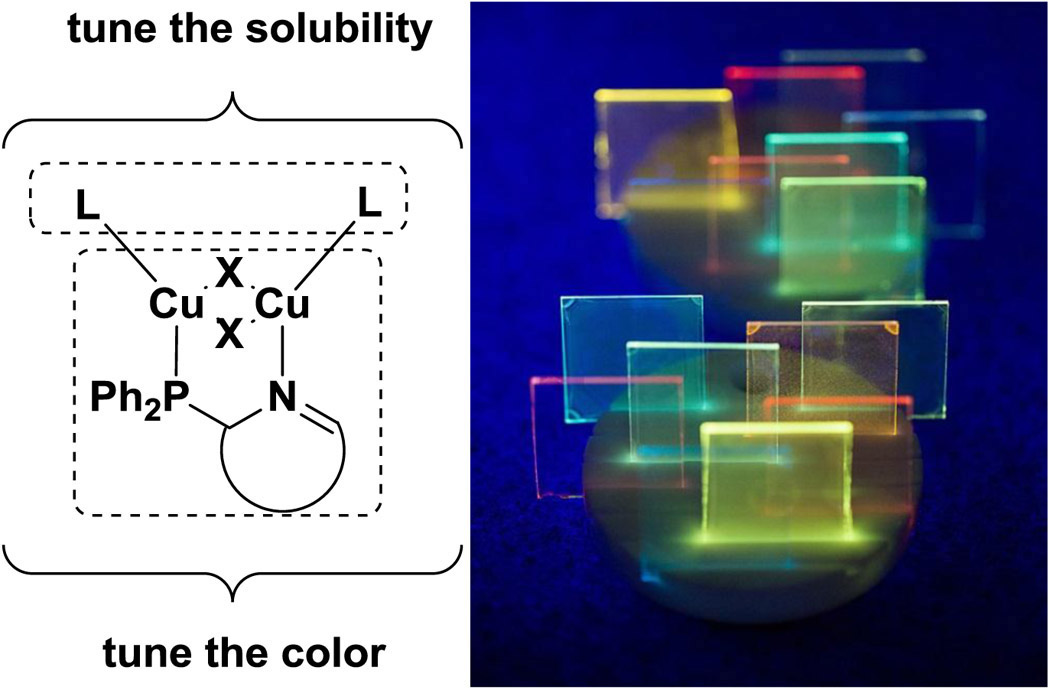 In summary, the reasons for the late rise of copper complexes are a mixture of coincidence (e.g., not realizing that poor photophysical performance in solution is unrelated to poor performance in a device), bad luck (e.g., choosing the wrong lead structures), and ignorance of their photophysical properties (e.g., not realizing the nature of singlet-harvesting emitters). After 15 years of work on OLED technology, namely, processing and device manufacturing as well as enhancing comprehension of the chemical and photophysical properties of this class of materials, many problems have been solved. Just recently we showed21 that NHetPHOS (N-heterocycle-phosphine) complexes (see Figure 5) are especially suitable as emitters in OLED devices. We manufactured solution-processed OLED devices with record brightness and an efficiency exceeding that of state-of-the-art solution-processed OLEDs by almost 50%, and that of the best vacuum-processed OLEDs by more than 10%.21 In this device, external quantum efficiencies greater than 20% were achieved, which corresponds to an internal quantum efficiency close to 100%. This is a major step for Cu(I) emitters toward introduction into mass-market applications. In the near future, we plan to move from small, lab-scale processing techniques to scalable ones such as inkjet printing. Finally, we also need to address questions such as how to realize high efficiencies in different colors and how to increase device lifetime.

This work was supported by the Verband der Chemischen Industrie (VCI); Deutsche Telekom Stiftung; the BioInterfaces and Research with Photons, Neutrons, and Ions programs of the German Helmholtz Association; the Deutsche Forschungsgemeinschaft through the transregional collaborative research center SFB/TRR 88 ‘3MET’; and the German Federal Ministry of Education and Research through the funding programs cyCESH and cyFLEX. We acknowledge the ANKA synchrotron radiation facility for granting beam time in the proposal MAT-023.

Daniel Volz is currently with the R&D department of CYNORA. He performed his PhD studies in the group of Stefan Bräse at the Karlsruhe Institute of Technology and at the Karlsruhe School of Optics and Photonics. He was fellow of the Henkel Foundation and the Fonds der Chemischen Industrie.