Mitochondria play a pivotal role in energy metabolism, programmed cell death (apoptosis), and oxidative stress. Mutated mitochondrial DNA in diseased cells compromises the structure of key enzymatic complexes, and thus it is not surprising that mitochondrial dysfunction leads to a myriad of health-related conditions, such as cancer, neurodegenerative diseases, diabetes, and aging1, 2 Efficient biomarkers and noninvasive techniques that would allow for real-time monitoring of mitochondrial activities would, therefore, provide a powerful tool toward the effective diagnoses of health problems and an opportunity for early therapeutic intervention.2

Reduced nicotinamide adenine dinucleotide (NADH) and flavin adenine dinucleotide (FAD) are co-enzymes that play important roles in a wide range of cellular oxidation-reduction reactions that are essential for biological function and survival of living cells and tissues. For example, NADH and NAD+ are involved in mitochondrial function, energy metabolism, calcium ion (Ca2+) homeostasis, gene expression, apoptosis, and oxidative stress.1, 2 In addition, reduced nicotinamide adenine dinucleotide phosphate (NADPH) is involved in the reductive biosynthesis of fatty acids and steroids, and serves as an antioxidant for oxidative stress, while the oxidized form, NADP+, participates in Ca2+ homeostasis.1, 2

Existing methods for monitoring the concentration of the NAD(P)H and FADH2 co-enzymes require the destruction of cells/tissue and thereby restrict metabolic studies to a snapshot without the morphological context. However, NAD(P)H and FAD are naturally fluorescent—unlike NAD(P)+ and FADH2—and therefore could permit noninvasive, fluorescence-based imaging of the metabolic state and mitochondrial activities of living cells or tissues in response to environmental hazards and diseases.1–3 Decades after the pioneering work of Britton Chance and his colleagues,1 there is a resurgent interest in exploiting the cellular autofluorescence of NAD(P)H and FAD as intrinsic biomarkers for quantitative and noninvasive studies of metabolic activities and mitochondrial anomalies. NADH and NADPH have fairly similar spectroscopic properties, so it is hard to differentiate between them solely using their excitation/emission spectra. However, the relative concentration of these two co-enzymes is dependent on the type of cell or tissue under investigation.1, 2

My coworkers and I have used two-photon (2P) fluorescence lifetime and anisotropy imaging microscopy (FLIM) to test the hypothesis that intrinsic NAD(P)H autofluorescence could serve as a natural biomarker for oxidative stress in cultured living cells.4 We used 2P-FLIM to study stress induced by hydrogen peroxide (H2O2) in the clonal mouse embryonic fibroblast cell line C3H10T1/2 (in culture).4Fibroblast cells, most common in connective animal tissues, play an important role in the synthesis of extracellular matrix and collagen as well as in wound healing. In contrast to confocal microscopy, FLIM exploits the sensitivity of the fluorescence lifetime of a molecule to changes in both its chemical structure and surrounding microenvironment.1 Under most imaging conditions, and in contrast to intensity-based imaging, the fluorescence lifetime per pixel is not sensitive to the concentration of a given fluorophore. Combining FLIM with 2P excitation offers additional advantages, including high spatial resolution, minimal photodamage to cells or tissues, reduced laser scattering, and enhanced detection efficiency.1

Under resting conditions, 2P-FLIM indicates that the intrinsic NADH autofluorescence per pixel—see Figure 1(A and B)—decays as a bi-exponential. We attributed the observed decay constants to free (lifetime 1 ∼500ps, fraction 1 ∼80%) and bound co-enzyme (lifetime 2 ∼2–4ns, fraction 2 ∼20%) in living cells.4The fluorescence lifetime is much shorter than the timescales of the binding events, so the amplitude fractions of these bi-exponential decays reflect the electronic ground-state populations of free and bound NADH. We also found that magic-angle detection of intracellular NADH autofluorescence is important to isolate the excited-state dynamics from the rotational mobility of the co-enzyme in FLIM measurements. 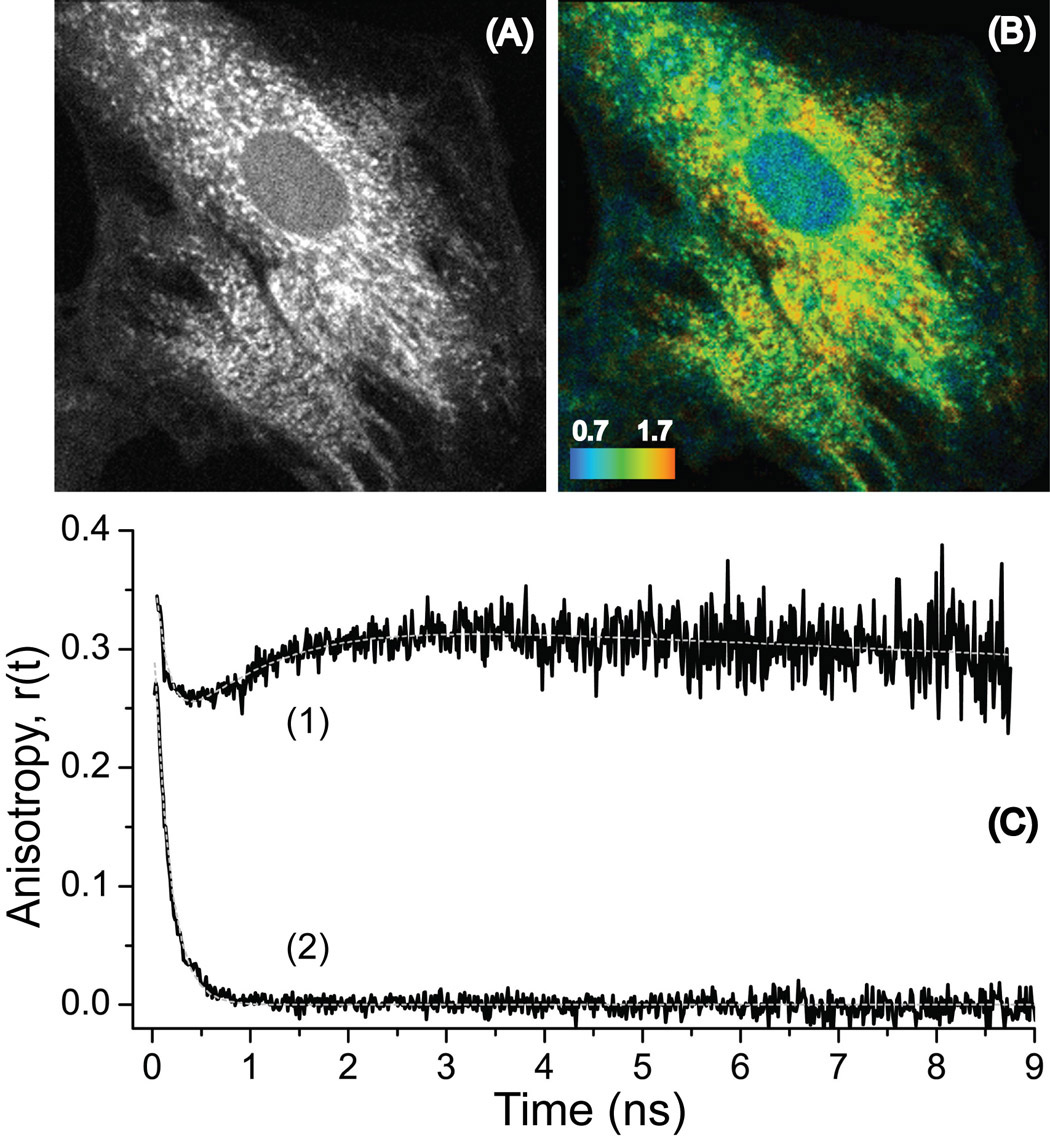 Figure 1. Based on the time-correlated single-photon counting technique, fluorescence lifetime and anisotropy imaging microscopy (FLIM) and time-resolved anisotropy measurements were carried out on intrinsic reduced nicotinamide adenine dinucleotide (NADH) autofluorescence. Representative two-photon intensity (A) and FLIM (B) of intracellular NADH reveals the heterogeneous co-enzyme structure and surrounding local environment (color code: 0.7–1.7ns). Time-resolved associated anisotropy of cellular autofluorescence (C, curve 1) indicates the presence of two species that are distinct in size (free versus bound) and fluorescence lifetime. Under the same conditions, the anisotropy of rhodamine green in a buffer decays as a single exponential (C, curve 2) with a fast (∼140ps) rotational time.

The intrinsic NADH autofluorescence is sensitive to H2O2-induced environmental stress as revealed by the average fluorescence lifetime histogram per FLIM image (n=12) compared with resting conditions of live cells.4Time-resolved anisotropy results directly demonstrate the existence of two populations of free and enzyme-bound NADH at equilibrium under resting and H2O2-stressed conditions. In addition to its distinct fluorescence lifetime, free NADH rotates (or tumbles) much faster than its enzyme-bound counterpart (see Figure 1), which explains the bimodal nature of the observed associated anisotropy curves of cellular autofluorescence.1–3The relative changes in the fraction of each population, however, seem statistically insignificant under stress. This suggests that cells adapt to environmental hazards by seeking equilibrium states associated with energy metabolism and intrinsic biochemical redox reactions.

Complementary studies on NADH, titrated with lactate dehydrogenase (LDH) in a phosphate-buffered saline (PBS), show that it exhibits an associated anisotropic decay that resembles the cellular NADH autofluorescence.4PBS, a water-based salt solution that mimics certain aspects of the fluids in the human body, was also enriched with glycerol and ovalbumin as macromolecular crowding agents.

Taken together, our results suggest that NADH can effectively be used as an intracellular biomarker for environmental stress, while hydrogen peroxide may induce a global stress, rather than one specific to a particular metabolic pathway. In addition, FLIM is a powerful technique for monitoring changes in chemical structure (e.g., enzyme binding) and the local environment (e.g., viscosity, pH) of intrinsic NADH in living cells due to environmental hazards or diseases. However, the fluorescence lifetime (the main observable in FLIM) of a given fluorophore is sensitive to a wide range of parameters and is usually modeled using a complex decay function. Consequently, for meaningful results, FLIM studies in living cells require a specific biological context. For this, it is necessary to control the physiological conditions and metabolic pathways in the biological system under investigation.

Our future plans include testing the relationship between NAD(P)H autofluorescence and other oxidative stress agents such as rotenone. Using time-resolved anisotropy of NADH, we are investigating the effect of macromolecular crowding on the biochemical reaction kinetics with targeted enzymes. In addition, we are examining the potential of FAD as a complementary biomarker for environment- and disease-induced changes in metabolic pathways, including oxidative stress.

Ahmed A. Heikal is a professor. He earned his PhD in applied physics at the California Institute of Technology, followed by a postdoctoral position at Cornell and an associate professorship in bioengineering at the Pennsylvania State University.