At some point growing up, most of us have focused direct sunlight using a magnifying glass to burn a piece of paper. Thus we are familiar with the concept of geometric optical concentration, where light is redirected from a large aperture using lenses, mirrors, or diffractive optics to a smaller output aperture (the focal spot in this example). This form of concentration is elastic, meaning that only the direction of light is changed while its frequency remains the same. Optical systems that maximize geometric concentration are designed within the framework of nonimaging optics,1 which involves optimally trading between the angular and spatial extent of light at the thermodynamic limit. Put simply, the more collimated the incident light (having a small range of impinging angles), the more it can be concentrated (i.e., focused) by a geometric optical system.

In many cases, however, light must be collected over a wide range of incidence angles, for example, due to the motion of the sun throughout the day or diffuse scatter from clouds. This can be accomplished via inelastic, luminescent concentration, where incident light is first absorbed by a fluorescent slab (for example, Plexiglas infused with a fluorescent dye) and then re-emitted at a lower frequency where it is trapped by total internal reflection and collected at the slab edges.2 This mode of concentration operates independent of incident angle beyond the geometric limit, a feat that is thermodynamically enabled by the heat generated (i.e., entropy increase) from the decrease in photon energy.3 In practice, however, luminescent concentrators (LCs) so far operate well below their theoretical potential, driving significant research into both new material and architecture strategies to improve their performance.2

To address this challenge, we recently demonstrated a route to merge luminescent concentration with nonimaging optics by using a simple photonic structure to manipulate the direction of emitted luminescence and achieve high secondary geometric gain.4 This notion of ‘focusing’ luminescence from the waveguide to increase the concentration was pointed out early on.5 However, the emission in typical LCs is isotropic, limiting the possible secondary geometric gain to a factor of approximately 1.3.6 By contrast, highly directional luminescence can be achieved using a bilayer thin-film emitter on a sheet of glass or plastic.7 Through appropriate choice of the thickness and refractive index of each layer (the top layer is luminescent), we were able to obtain sharply directed conical emission that peaks at an emission angle θ∼53° (see Figure 1). 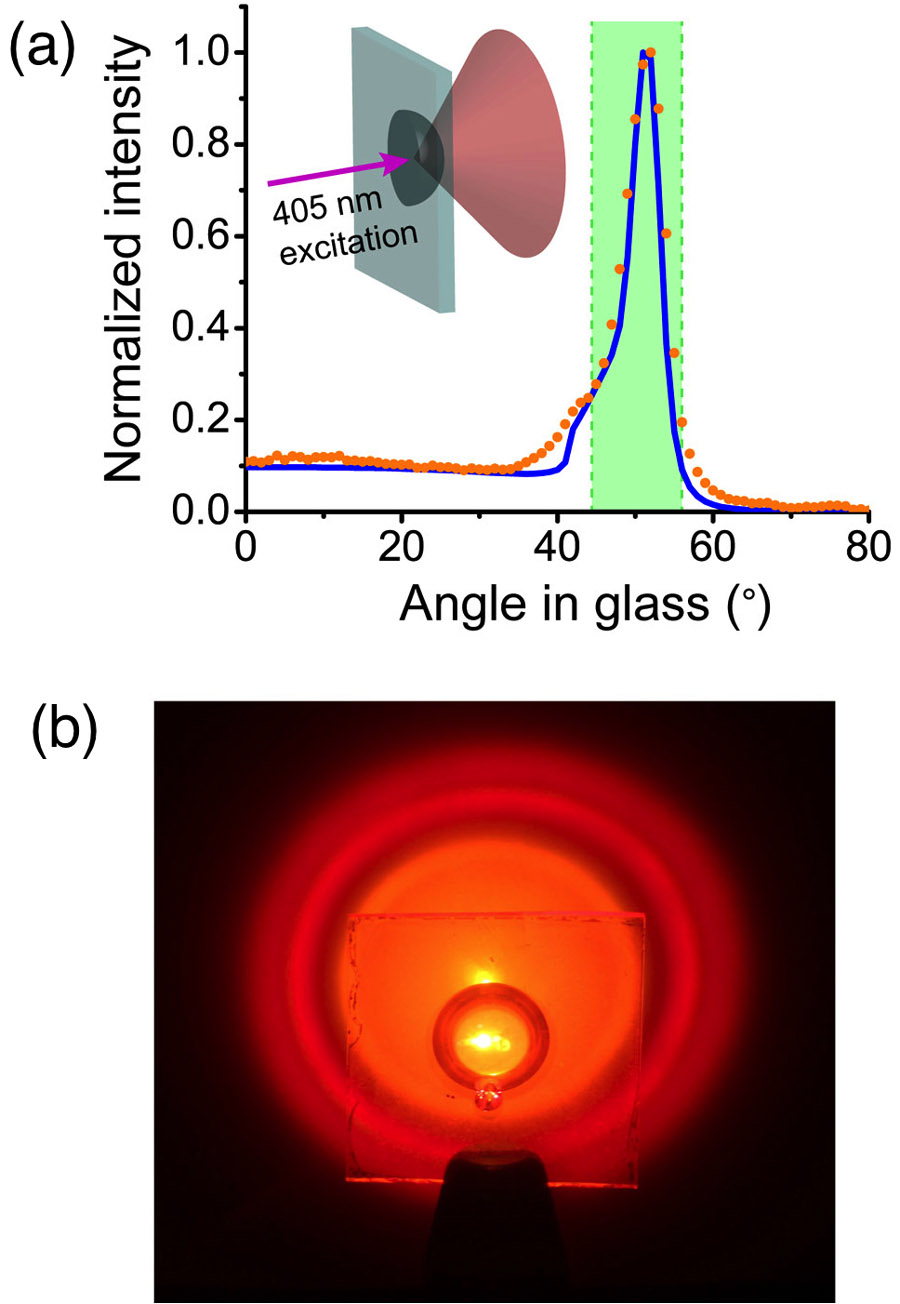 Figure 1. (a) Luminescence intensity measured as a function of polar angle relative to the substrate normal. The luminescence, which would normally be trapped in the glass substrate, is coupled out using a half-ball lens for this measurement, as shown in the inset. (b) Photograph of the conical luminescence projected on a white card, showing a bright ring that corresponds to the intensity peak in the upper plot. (Figure adapted and reprinted with permission.4Copyright American Chemical Society 2014.)

It was subsequently straightforward to formulate a nonimaging optical solution to exploit the directionality of this emission profile and ‘focus’ the luminescence to a small spot using a compound paraboloidal reflector: see Figure 2(a). We constructed this optic from two opposing parabolas with their axes tilted symmetrically at the emission angle θ and revolved azimuthally about their intersection. For luminescence confined within an angular range Δθ about the emission peak (the green shaded region in Figure 1), the nonimaging optical gain relative to a conventional LC with isotropic emission is approximately 2cos2/Δθ,4 which equates to an approximately fourfold intensity increase for the emission profile shown in Figure 1. 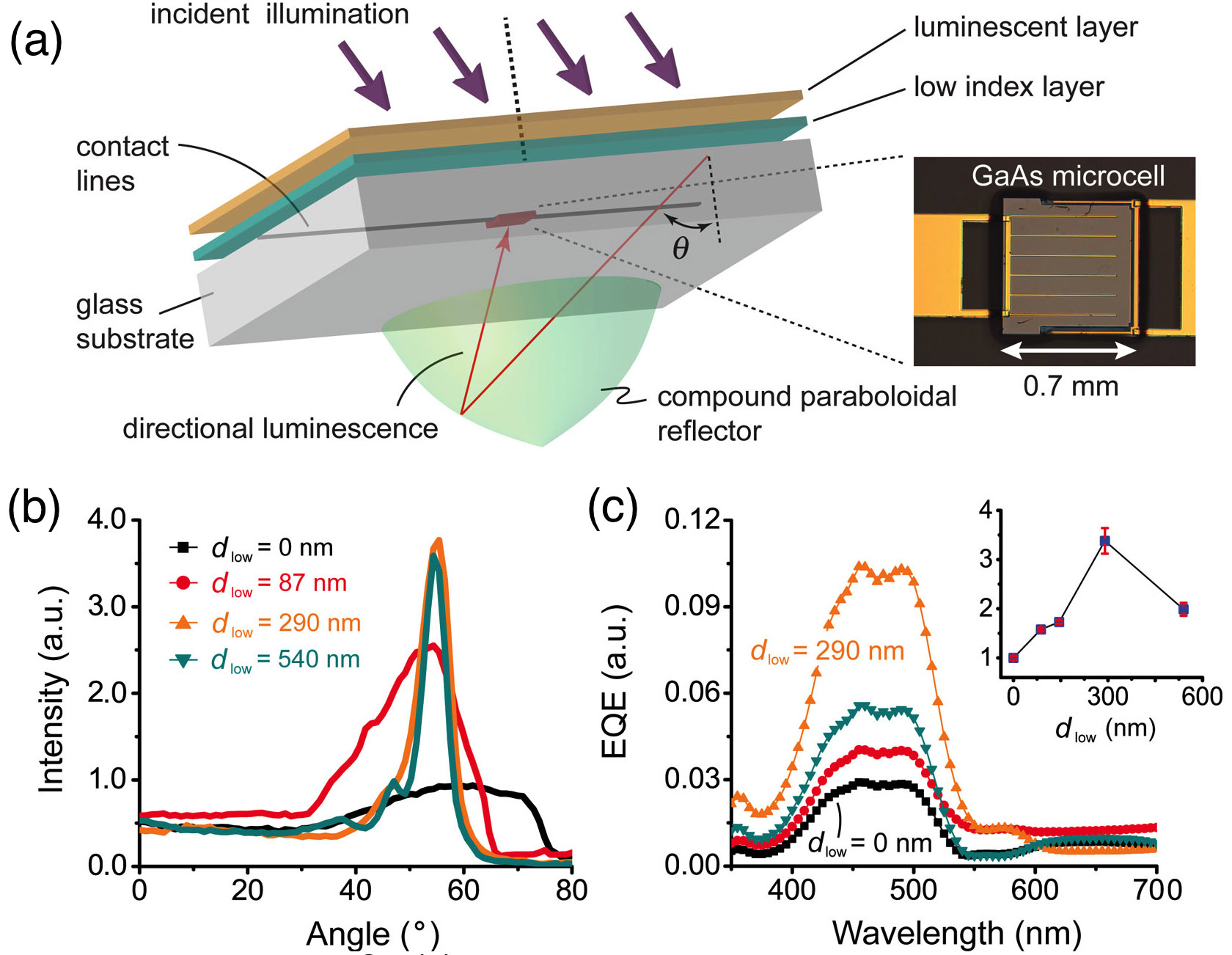 This analytical result is strictly valid only in two dimensions, where the compound paraboloid is ideal. However, its 3D revolved counterpart in Figure 2 suffices for experimental demonstration. In this case, we turned a custom compound paraboloidal reflector from acrylic plastic and fixed it to the face of the glass luminescent concentrator substrate opposite a small gallium arsenide (GaAs) photovoltaic cell fabricated by our collaborators at the University of Illinois. Measuring the photocurrent quantum efficiency for several emissive layer configurations with increasing directionality—see Figure 2(b)—led to a substantial increase in efficiency—see Figure 2(c)—resulting in a more than threefold increase relative to the case of isotropic emission with or without the paraboloidal optic. We confirmed secondary geometric gain was the origin of this improvement by moving the photovoltaic cell relative to the paraboloidal optic to map the sharply peaked ‘focal spot’ intensity distribution.

These results point to an exciting opportunity at the inter section of luminescent concentration and nonimaging optics, whereby photonically engineered luminescence can be concentrated or otherwise transformed via nonimaging optics. Beyond photovoltaics, this capability may prove useful for other applications such as scintillating radiation detectors, where improved luminescence collection could enhance sensitivity. Another application that we are currently pursuing is in the area of luminescent photobioreactors,8 where we are using this concept to tailor the intensity and spatial distribution of light delivered to algae and cyanobacteria to maximize their growth productivity for biofuels.

Yufei Shen is a doctoral student in the Department of Physics. His graduate research is focused on organic optoelectronic devices.

Noel Giebink is an assistant professor in the Electrical Engineering Department. His research currently focuses on solar concentration, photovoltaics, and optoelectronic and photonic devices based on organic semiconductors.