Chemical sensing benefits from simultaneous sensitivity to light and gases

The gas sensitivity of hybrid materials formed by an organic dye and a wide-bandgap semiconductor is enhanced by the exposure to visible light.
14 October 2014
Corrado Di Natale

Many practical applications, such as air quality, explosives and drugs detection, and food safety, require the use of gas sensors that can capture a wide variety of volatile compounds just as human olfactory receptors do. Achieving this range demands a class of materials whose sensitivity and selectivity can be controlled. Although organic chemistry offers a number of possibilities to design molecules with the desired sensing properties, many organic materials are poorly suited to the electronic technology necessary to integrate sensor systems. One solution is offered by hybrid materials. Formed by depositing a layer of dye molecules over a wide-bandgap semiconductor, these materials are endowed with a number of properties that make them appealing for optoelectronic and photovoltaic applications. Moreover, by converting visible photons into excess charge carriers, the combination of organic and inorganic materials yields additional desirable properties such as gas sensing. In this regard, metal oxide semiconductors are among the materials most frequently used for chemical sensors, and several dye molecules are superior at binding airborne compounds.

A good example of a metal oxide semiconductor and a dye molecule giving rise to a hybrid material is provided by zinc oxide (ZnO) and porphyrin. ZnO is a wide-bandgap (3.37eV) semiconductor with large exciton binding energy (60meV). It has been studied for gas sensors, optoelectronics, electronic devices, photoanodes for dye-sensitized solar cells, and for harvesting mechanical energy. So far, numerous ZnO nanostructures with different sizes and morphologies have been synthesized, such as nanorods and nanotubes.

Porphyrins play a fundamental role in living systems, including oxygen transport and charge transfer in catalytic processes in animals, and photosynthesis in plants. These characteristics have been widely studied with the aim of fabricating analogous functions in artificial systems. They are also interesting for chemical sensing. Indeed, porphyrins are among the most versatile binding molecules because they form a wide range of metal complexes. Porphyrins also interact with airborne molecules through many different mechanisms. Our group has exploited this capability to develop gas sensors based on arrays of quartz microbalances for applications such as medical diagnosis (e.g., lung cancer) and environmental control (e.g., on the International Space Station).

We have investigated the interplay of light and gas sensitivity in porphyrin-ZnO materials. The particular focus of our study was ZnO nanorods prepared by a hydrothermal route. This is a relatively easy way of fabricating ZnO nanostructures that enables the creation of compact vertical nanorods oriented along the main crystalline symmetry axis with a diameter of around 100nm and height of a few micrometers on a variety of surfaces. The nanorods can be conveniently functionalized by a porphyrin layer that is usually applied after the growth of ZnO and that covers the top and lateral surfaces of the rods.

We have shown that the conductivity of the hybrid material is sensitive both to visible light and to donor-acceptor gases such as amines and alcohols.1 Figure 1 shows the sensing mechanism. Under visible light, sensitivity toward electron donor species (e.g., amines) increases while that toward other species remains almost unchanged. Note that this increase in sensitivity is generally expected for molecules that are prone to donating electrons. However, the case of amines is interesting because they are relevant to food freshness as well as to security. (Amines are components of explosives and narcotics.)

Figure 1. The charge transfer from an electron donor molecule—here an amine, colored green—in the dark (top) is enhanced in light (bottom). Due to the illumination, porphyrins become more prone to accept electrons from donor molecules such as amines. The light activates a charge transfer from the porphyrin (magenta) to the zinc oxide (ZnO), shown schematically in the bottom panel by the arrows as a transfer from the HOMO to the LUMO and then to the CB (the ZnO surface). LUMO/HOMO: Lowest unoccupied/highest occupied molecular orbital. CB: Conduction band. VB: Valence band. hν: Light.

In further studies we measured surface photovoltage. This quantity, which can easily be measured in the laboratory with a Kelvin probe, is exploited in organic functionalized field effect transistor sensors and is also essential in characterizing materials for photovoltaic applications. Our Kelvin probe investigations demonstrated the interplay between photosensitivity and gas sensitivity in organic-molecule-functionalized CMOS nanostructures, suggesting that volatile compounds may act as a dopant to improve the photovoltaic properties of the dye-semiconductor hybrid.2

More recently, we showed that these hybrid materials can be achieved using a ‘one-pot’ growth technique by adding the porphryins directly into the precursor solution during hydrothermal growth of ZnO. Porphyrins interfere with ZnO growth, altering the morphology of the materials (see Figure 2). The height-to-width ratio of each nanorod depends on the nature of the metal complexed in the porphyrin ring. For instance, columnar growth is retained in the presence of manganese porphyrins, while copper porphyrins radically change the nanorod structure. In addition, the sensing properties of the one-pot material are different from those of the material prepared by growing the porphyrin onto previously formed ZnO nanorods.3, 4 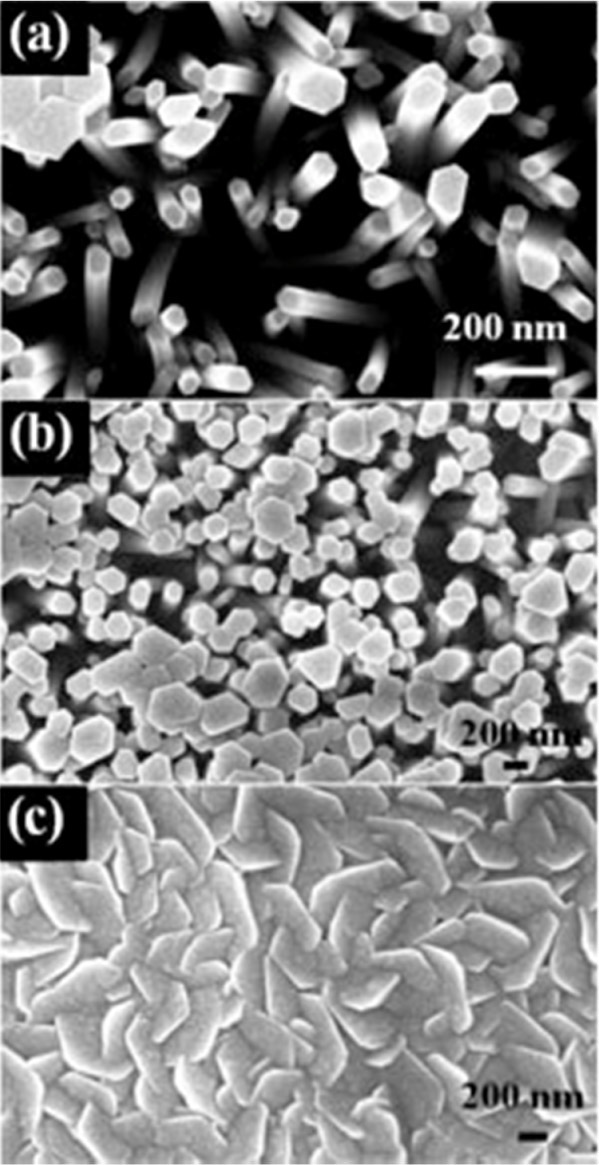 In summary, photo-assisted chemical sensors offer a further degree of freedom for the design of sensor arrays. They extend the properties and capabilities of porphyrin-based sensor arrays with potential applications especially in medical diagnosis, the quality and control of foods, and the detection of compounds signaling harmful or dangerous substances. To fully exploit the work described here, we plan to develop miniaturized arrays of porphyrin-ZnO sensors integrated on a single substrate with the ultimate aim of generating a new family of compact, versatile electronic noses.

Corrado Di Natale is a full professor of electronics. His research interests are focused on the development of chemical sensors and biosensors, and their applications.