Routine satellite monitoring of the Arctic is critical to a host of environmental applications. Surveillance enables weather forecasting and studies of climate change, sea ice conditions, and natural disasters such as volcanic eruptions that affect commercial activities and transportation. However, coverage of the region by current space-based imaging systems is insufficient. Imagers onboard traditional geosynchronous Earth orbit (GEO) environmental satellites, such as the US's Geostationary Operational Environmental Satellite and the European Meteosat, image the full Earth disk as seen from the satellites' assigned longitude every 15–30 minutes, but they provide poor coverage of high latitudes, and cannot reach the center of the Arctic. Imaging radiometers onboard the other major type of traditional environmental satellite—those in sun-synchronous polar orbits that revisit the Arctic approximately every 100 minutes—do not always cover the entire region on every pass. These limitations reduce the systems' effectiveness for monitoring rapidly changing environmental conditions. We need satellites that provide continuous coverage of the Arctic and that host instruments with image refresh rates similar to, or better than, those of GEO systems.

We can meet these requirements using compact, wide-field-of-view (∼18°) imagers that operate onboard satellites in a highly elliptical orbit (HEO). These collect continuous multispectral, high-sensitivity visible and near-IR Arctic imagery both day and night. We conceived such imagers based on the remarkable and unprecedented success of an instrument known as the Visible IR Imaging Radiometer Suite (VIIRS) operating onboard the Suomi National Polar Partnership satellite. We are currently developing a second VIIRS flight unit for the National Oceanic and Atmospheric Administration/NASA Joint Polar Satellite System. VIIRS includes a high-sensitivity, day-night band (DNB)1 that is panchromatic (sensitive to all visible colors) and collects highly detailed imagery of the Arctic even under low light levels (see Figure 1). VIIRS DNB imagery has vastly superior information content compared with emissive or thermal IR imagery collected at the same time under the very low thermal contrast conditions that occur frequently in the Arctic during winter (see Figure 2). The imagery is enabling significant improvements in forecasting weather and sea ice changes. 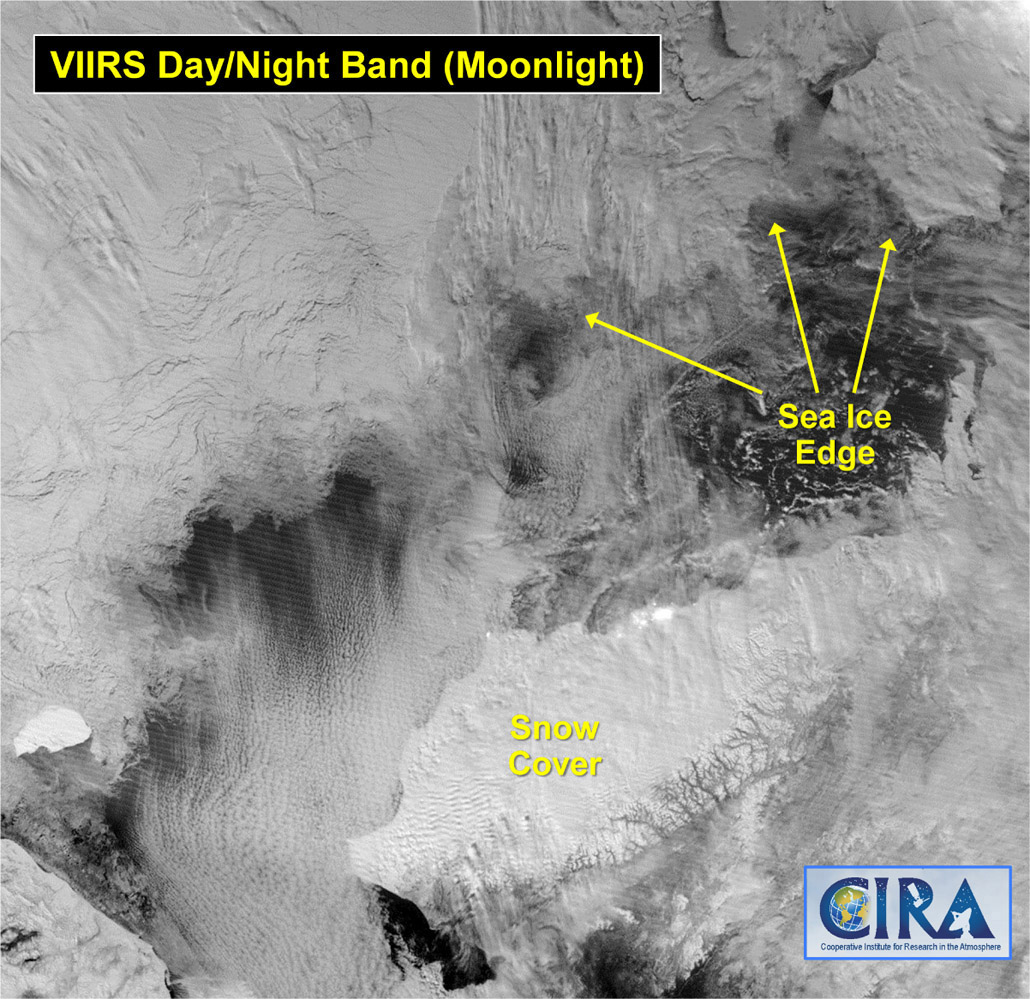 Figure 1. Images from the Visible IR Imaging Radiometer Suite (VIIRS) Day-Night Band (DNB) system of Alaska and the Chukchi and Beaufort Seas taken under moonlight. DNB provides high-contrast imagery even under the low thermal contrast conditions prevalent in the Arctic winter. (Image reproduced with permission from CIRA: the National Oceanic and Atmospheric Administration Cooperative Institute for Research in the Atmosphere at Colorado State University.)

Figure 2. VIIRS imagery in the MI5 spectral band (left) and the DNB (right) of the western Chukchi Sea. Note how the sea ice structure and other surface detail so readily apparent in the DNB image is not visible at all in the thermal IR image. (Image reproduced with permission from CIRA.)

Our HEO day-night imager (HDNI) concept would use this technology to collect wide-dynamic-range imagery beyond the VIIRS DNB, with spectral coverage (three color, versus single broad band), radiometric sensitivity, and spatial resolution that are better than the DNB. Our approach offers a full Arctic coverage time of 10s at apogee, and a refresh time of 5 minutes instead of 100 or more for a sun-synchronous polar-orbiting imager. HDNIs can produce multispectral visible/near-IR imagery (RGB or true color) both day and night, with higher-contrast, higher-resolution imagery (750m at apogee) than existing and planned IR sensors. The dynamic range extends from the brightest clouds, ice, and snow to reflected moonlight from open water, thereby enabling surface discrimination even under low light and very low thermal contrast conditions. Therefore, the system can provide unique information about the dynamic Arctic environment, improving weather forecasting and routine monitoring of ice conditions, human activity, and natural disasters. Rapidly refreshed HDNI data would result in frequent updates to key environmental products, such as cloud and surface imagery, ice, and open water distribution, including real-time maps of where leads are opening and new ice is forming, vector ice motion, and vector polar winds from cloud motion.

Furthermore, the HDNI's compact sensor design makes it ideal for deployment as a hosted payload or as the primary payload on a small satellite. The design, described in more detail elsewhere,2 offers several advantages over scanning sensors currently used or planned for use in geosynchronous and polar orbit, including significantly smaller size, lighter weight, better sensitivity, and more rapidly updated imagery. The large-format 2D detector arrays used in HDNIs enable a wide-field-of-view imager that could cover the entire Arctic in one frame, plus most of the Northern Hemisphere as seen from the satellite.

We could implement HDNIs in a wide variety of highly elliptical orbits. For example, we could deploy the imagers in a constellation of two satellites in identical 12-hour HEO orbits, sharing the same orbital plane with a temporal offset of 6 hours, as described in Trishchenko and Garand.3 This two-satellite HEO constellation would provide continuous coverage of the Arctic, because each satellite moves relatively slowly near apogee (39,863km above Earth's surface) enabling it to dwell over the Arctic for hours.

Furthermore, the imager should be able to detect human activity in the Arctic and elsewhere, based on demonstrated VIIRS DNB performance. For example, in Figure 1 it is easy to see city lights along the North Slope of Alaska. Likewise, in other VIIRS DNB frames, natural gas flares and lights from fishing boats show up clearly. This application of HDNI imagery may become increasingly important over time, as development of the Arctic continues.

In summary, persistent satellite observations are essential for monitoring and understanding Earth's environmentally sensitive and rapidly changing Arctic region. Compact wide-field-of-view imagers aboard satellites in HEO could be positioned over the Arctic and collect multispectral, wide-dynamic-range visible and near-IR imagery with sensitivity similar to that of the VIIRS DNB in sun-synchronous polar orbit. These imagers provide high-contrast visible-wavelength imagery even through the long polar night. Rapidly refreshed HDNI data would result in frequent updates, and the relatively small size of HDNIs makes them easy to deploy. We look forward, in the future, to the possibility of building and flying HDNIs as part of commercial or government systems.

Jeffery Puschell is a principal engineering fellow and has more than 30 years of experience developing IR and visible-wavelength systems for research and operational applications in remote sensing and optical communication. He has authored or coauthored more than 130 technical papers.