For absolutely secure quantum communication using the popular BB84 quantum key distribution (QKD) protocol, single photons are required. Figure 1 shows a schematic of a single-photon QKD that will prevent any potential eavesdropper (Eve) from intercepting a message without the sender (Alice) and receiver (Bob) noticing. If the source emitted more than one photon at a time, it would be possible for Eve to extract one of these photons without disturbing the other photon(s), which would reveal Eve's presence. In the BB84 protocol, linear and circular polarization bases provide two different quantum-level representations of 0 and 1. The security of a system based on single photons will not be broken even if extremely powerful quantum computers come into existence that break all currently secure systems, such as bank accounts, internet transactions, and military services. 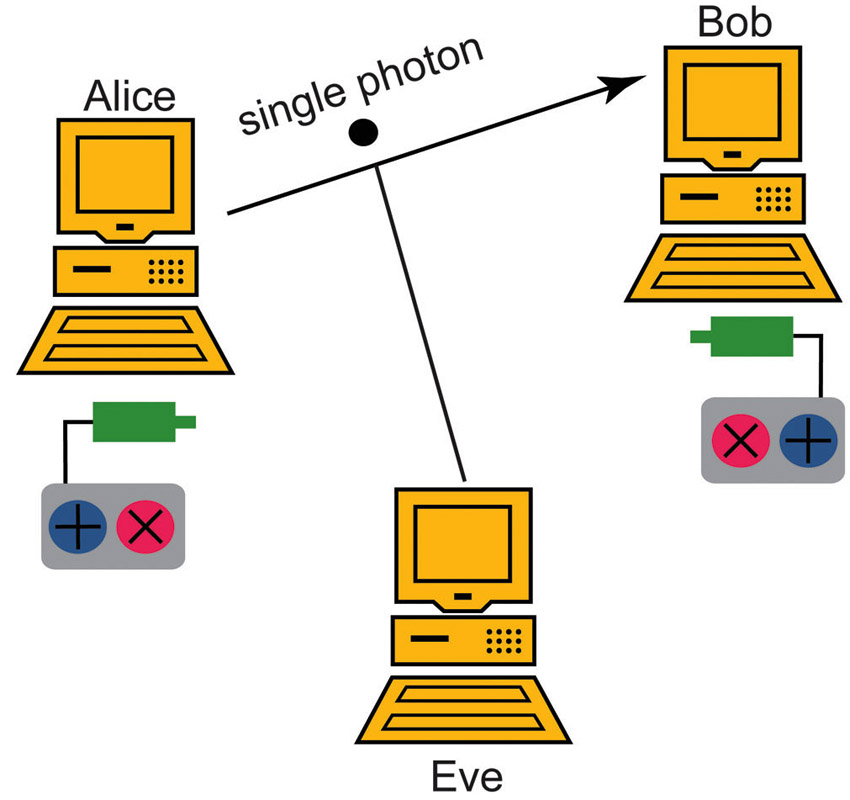 A single-photon source (SPS) is a nonclassical light source with all photons separated in time. For such photon ‘antibunching,’ the second-order coherence function g(2)(t) should have a minimum at interphoton time t=0 (see Figure 2). If g(2)(0)<0.5, it indicates the absence of photon pairs. 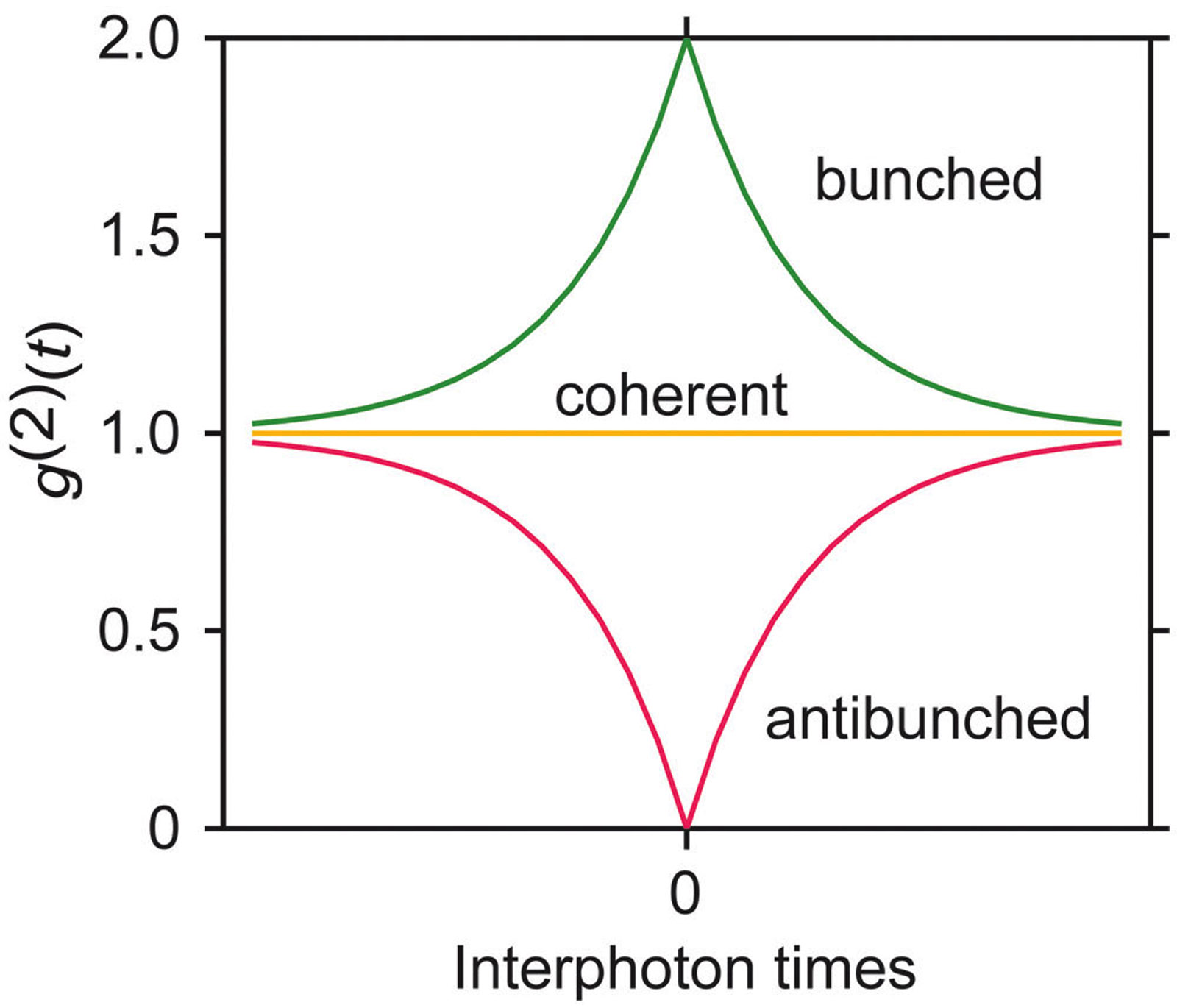 The critical issue in producing antibunched photons is the low concentration of emitters, such that, within an excitation-laser spot, only one emitter becomes excited and emits only one photon at a time. A microcavity/nanoantenna enhances the single-photon emission rate due to the Purcell effect (the density of states is enhanced) and also provides line narrowing, directionality, and, in some geometries, polarization selectivity of single-emitter fluorescence.

If the photon has unknown polarization, it must be filtered through a polarizer for the desired polarization for quantum key distribution. If we can produce a photon with definite polarization, the efficiency of the quantum cryptography system is doubled. Colleagues and I have been working toward robust efficient room-temperature SPSs with definite polarization based on fluorescence in nanocrystals: colloidal quantum dots (QDs), nitrogen-vacancy (NV) color-center nanodiamonds, and nanocrystals doped with trivalent rare-earth ions (TR3+). As microcavities for single emitters, we used cholesteric chiral photonic bandgap1–4 and Bragg-reflector4–6 microcavities. We have also developed plasmonic bowtie nanoantennas.

Figure 3(a) shows antibunching with g(2)(0)=0.382 of cadmium selenium telluride (CdSeTe) QD fluorescence. This took place under 633nm laser excitation in a QD-doped glassy oligomeric cholesteric liquid crystal (CLC) chiral 1D-photonic-bandgap microcavity1 made by planar alignment of a CLC layer. In such a chiral microcavity, light is prevented from propagating in a wavelength range (a ‘stop band’ or selective reflection) if it is circularly polarized such that the electric field vector follows the rotation of the CLC molecular director (that is, the direction of the local molecular alignment). Circular polarization with the opposite handedness does not ‘see’ a bandgap and propagates as in an isotropic medium. A white circle in Figure 3(b) marks a fluorescence image of a single QD used for antibunching measurements. We also observed antibunching from NV color-center nanodiamonds in a monomeric (fluid) CLC chiral photonic bandgap microcavity. 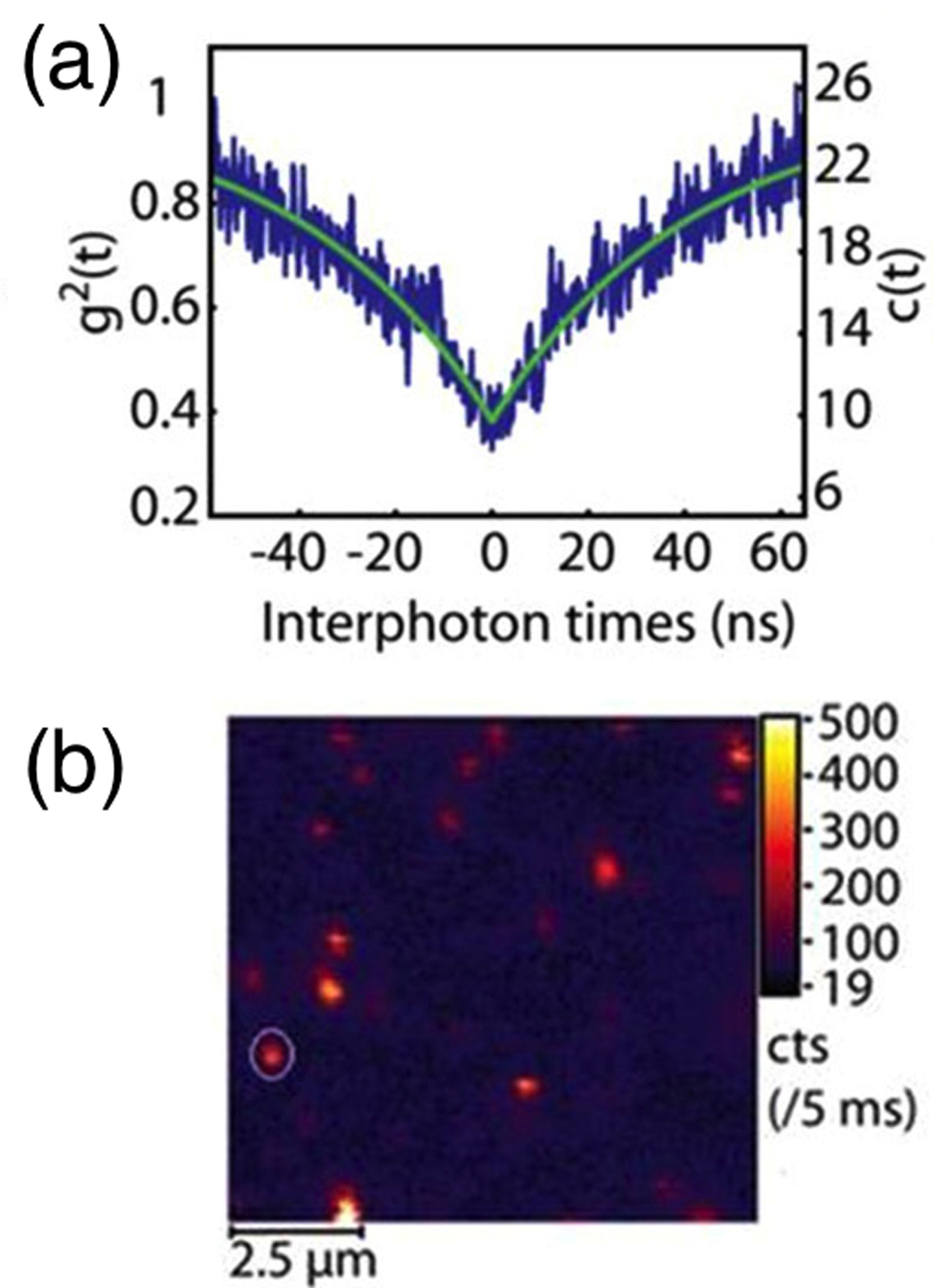 The QD fluorescence spectra are shown in Figure 4. Left-handed circularly polarized (LHCP) light experiences the photonic bandgap (curve 1) with a chiral microcavity resonance—which has a full width at half maximum (FWHM) of 16nm—indicating that the LHCP light is coupled to the cavity mode. The central wavelength of this resonance roughly matches the edge of the photonic stop band (curve 3). Curve 2 shows the right-handed circularly polarized (RHCP) fluorescence spectrum (FWHM of 76nm), which does not experience the chiral microcavity and so is much less intense. The maximum intensity ratio between LHCP and RHCP (with no bandgap) is about 5:1.1 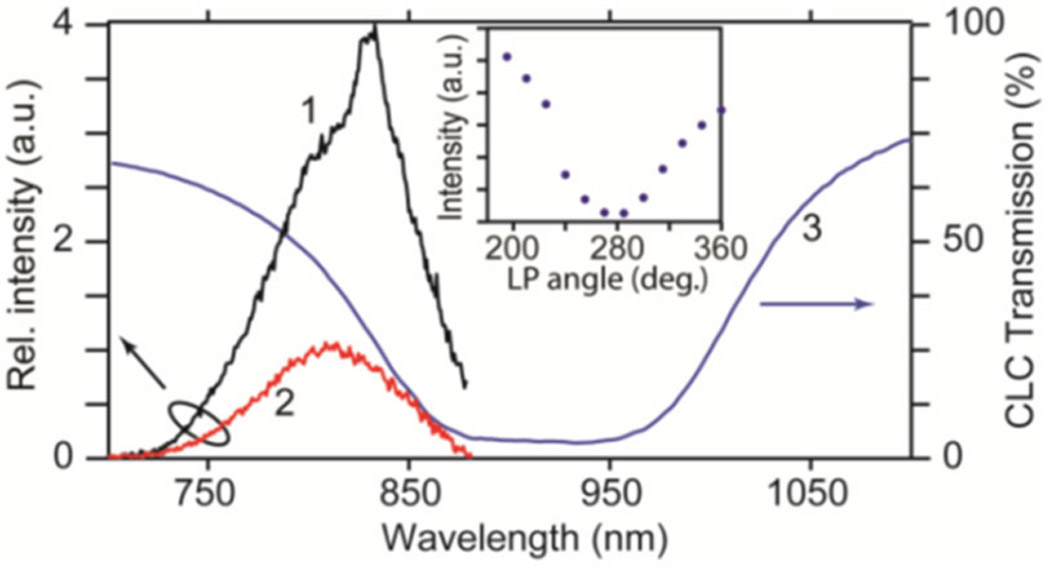 Although earlier we developed SPSs with definite linear polarization using planar alignment of dye-doped liquid crystals,7 for fluorescence enhancement and line narrowing, microcavities should be used. For this purpose, we also investigated a 1D-photonic-bandgap microcavity with a ‘defect layer’ consisting of a layer of colloidal cadmium selenide/zinc sulfide (CdSe/ZnS) QDs (620nm fluorescence maximum) spin cast between two distributed Bragg reflector mirrors. These mirrors, comprised of alternating layers of silicon dioxide (SiO2, refractive index n is 1.54) and silicon nitride (SiNx, n=2.02), were deposited via plasma-enhanced chemical vapor deposition.5We found QD fluorescence line narrowing in the prepared microcavities was up to one order of magnitude6 and we obtained photon antibunching with g(2)(0)=0.32.6For linearly polarized single photons from such structures, we are planning to prepare Bragg-reflector microcavity micropillars with elliptical cross-sections using electron-beam lithography patterning8 or focused-ion-beam milling.9 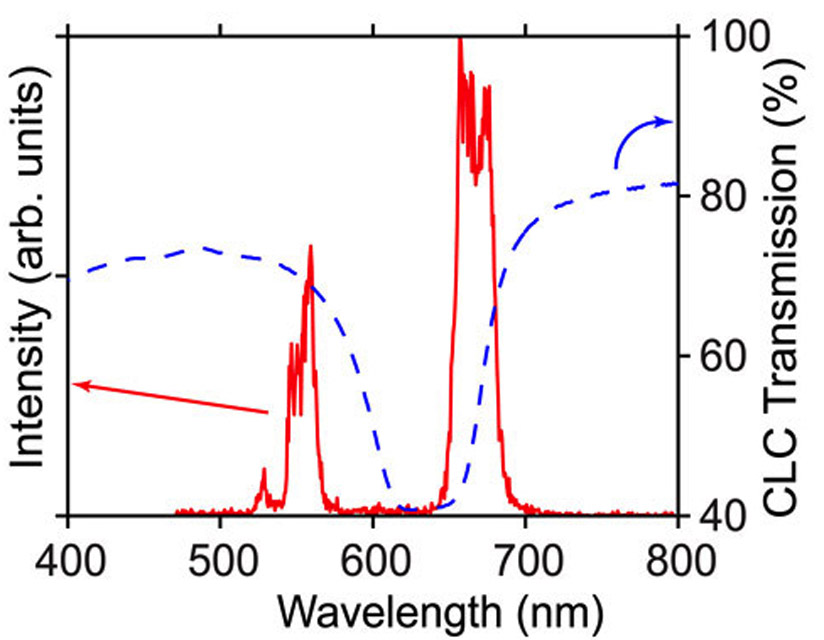 The advantages of using TR3+ for SPS applications lie in their stability against bleaching and a wide spectral range including optical fiber communication wavelengths 1.3 and 1.55μm. A long fluorescence decay time (the shortest, of 10.6μs, was observed for the Er3+ transition in Er, Yb-doped cerium oxide nanocrystals11) of commonly used weak forbidden transitions is the main restriction for using TR3+ for SPS applications, which can be overcome with nanoantennas. Recently a fluorescence enhancement of 1340× was reported for dye molecules in a gold bowtie nanoantenna (two triangle tips separated by a nanometer-sized gap)12 with fluorescence lifetime reduced by ∼30×.

Using electron-beam lithography, we fabricated gold bowtie nanoantennas, expecting fluorescent enhancement and a reduced (nanosecond) decay time for TR3+: see Figure 6(a). Figure 6(b) shows our results in antenna polarization selectivity. To position nanocrystals within this nanoantenna, we manipulated the nanocrystal using the tip of an atomic force microscope: see Figure 7. The positions of two nanodiamonds on the three micrographs are indicated by 1 and 2.

Figure 7. Three atomic force microscopy (AFM) images showing how the AFM tip is used to ‘push’ the nanodiamonds, labeled 1 and 2.

In summary, we have presented some results of our work toward developing robust and efficient room-temperature SPSs with definite circular or linear polarization based on fluorescence in nanocrystals. Such SPSs will find applications both in free-space and fiber-based quantum cryptography, and also in some quantum computation protocols. In addition, single photons are very important in metrology and fundamental physics experiments such as in interference from uncoupled light sources and entanglement-state generation, in shedding light on wave-particle duality as well as in fundamental issues of quantum measurement and uncertainty.

Our next step will be placing color-center nanodiamonds and, separately, single TR3+-doped nanocrystals between nanoantenna arms to enhance the photon count rate and directionality, reduce the fluorescence decay time for TR3+ to tens of nanoseconds, and provide linear polarization selectivity with photon antibunching from a nanocrystal within a nanoantenna.

The author acknowledges support from the Army Research Office and National Science Foundation, and students' fellowships from the Air Force and NASA. She also thanks her graduate students and collaborators, whose contributions are integral to this research: Luke Bissell, Justin Winkler, Dilyana Mihaylova, Andreas Liapis, Zhimin Shi, Robert Boyd, David Goldberg, Vinod Menon, Guanying Chen, and Paras Prasad. She also thanks Carlos Stroud and Ansgar Schmid for valuable discussions. Nanoantennas were prepared using the Cornell NanoScale Science and Technology Facility and the University of Rochester Integrated NanoSystems Center.

Svetlana Lukishova is a group leader and senior scientist and a topical/associate editor of Optics Letters. She received her PhD from the Moscow Institute of Physics and Technology for work carried out at the Lebedev Physical Institute, both in Moscow, Russia, and has over 200 publications and book contributions.