Although we view the physical world around us in 3D, traditional displays show only 2D images lacking depth information. The development of 3D display technologies would enormously benefit many fields, including medical imaging, engineering design, and entertainment, by enabling the visualization of multidimensional data. Holographic displays are promising for applications such as these due to their ability to present a truthful virtual window into a 3D scene, thereby retaining the characteristics of real-world objects.

Holography directly addresses the wavefront of light from a 3D scene, allowing full-depth cues to be losslessly captured and completely reconstructed. Compared to traditional stereoscopic or multiview displays, no special eyewear or eye-tracking devices are required to view the reconstructed 3D scenes. In addition, accommodation-convergence conflicts are reduced in holographic displays, enabling the avoidance of visual fatigue.

The practical implementation of holographic displays presents many technical challenges. In particular, high-resolution displays are limited by the huge amount of data that must be recorded and processed in the rendering and reconstruction of 3D images. Volume holographic polymers (VHPs), which offer high storage density and better multiplexing properties compared with planar holography, may provide a path toward practical holographic displays. In combination with computational holography, 3D scenes can be reconstructed by recording computer-generated holograms in the polymeric material.1

We propose a 3D display system based on computer-generated Fourier transform phase-only holograms (kinoforms) angularly multiplexed in a VHP. Using this technique, the pure-phase wavefront of a 3D object is generated and uploaded by a phase-only spatial light modulator (SLM). The object beam, originating from a collimated 532nm laser split along two paths, is modulated by the SLM. When the object beam interferes with the reference beam within the polymer, its refractive index is changed, forming a volume hologram. The wavefront and 3D image can then be reconstructed at a designed distance behind the VHP.

A schematic of our system is shown in Figure 1. Kinoforms containing the wavefront information of a 3D scene are generated by a point-source algorithm, which models a 3D object as a collection of self-luminous points of light.2 A phase SLM, in place of the amplitude SLM employed in traditional holographic recording, is used to upload the kinoform and modulate the object beam. Each 3D image is recorded as a holographic element (hogel). In this method, only one Fourier lens is used to record the Fourier spectrum of the 3D image onto the polymer. Once recording is complete, the 3D scene is reconstructed by illuminating the polymer with the reference beam. No imaging lens is required to reconstruct the 3D scene, thus providing more flexibility in system design. Figure 1. 3D display based on volume holographic kinoforms. The wavefront of the 3D model is recorded in the gold-nanoparticle-doped polymer—phenanthrenequinone-doped poly(methyl methacrylate)—by interference with the object and reference beams, allowing the 3D image to be reconstructed without an imaging lens. SLM: Spatial light modulator.

Various materials—including silver halide films, dichromated gelatin, lithium niobate, and photopolymers—can be used to record holograms or kinoforms. Because of their ability to display terabytes of data with full parallax using multiplexing, thick photopolymers are the most suitable recording material for holographic displays. To obtain a higher diffraction efficiency and better angular selectivity, we doped a photopolymer—phenanthrenequinone-doped poly(methyl methacrylate), PQ-PMMA—with gold nanoparticles for use as the volume holographic material.3 These gold nanoparticles enable a localized surface plasmon resonance effect, improving the holographic performance by introducing an absorption grating in the polymer. When this absorption grating is in phase with the refractive index grating, holographic diffraction efficiency is improved by up to 47.1%. Angular multiplexing is a commonly employed method for recording a large number of holograms. In the system that we are proposing, the angular multiplexed hogels in the polymer contribute to a high-resolution 3D display.

In display systems, the transmittable information is characterized as a space-bandwidth product (SBP). This product is a scalable, dimensionless value, often expressed in terms of the resolution of the image in pixels. The bottleneck of such a display system is typically the SBP of the SLM used to compose the kinoform.4 To enhance the pixel number and increase the resolution, most holographic displays use SLM array or tiling systems. Angular multiplexed recordings of kinoforms in VHPs provide a new approach to breaking the restriction on SBP in SLM devices. In this process, the object beam is rotated during recording, resulting in many angularly multiplexed hogels recorded in one local volume (∼1.5mm diameter) of the polymer. When this spot is illuminated by the reference beam, all pixels in all kinoforms are reconstructed simultaneously, resulting in a high pixel density display (up to N times the pixel density of one SLM for N multiplexed kinoforms). Angularly multiplexed kinoforms therefore enable the expansion of the SBP without relying on a large number of tiled SLMs, and as a result, the reconstructed 3D scenes are no longer limited by SLM parameters. This enables multiple 3D scenes to be read out simultaneously. Using this method in combination with our gold-nanoparticle-doped PQ-PMMA, the SBP of the system can be improved by two or three orders compared with traditional 3D display methods using a single SLM/kinoform.

Using object beams with angular intervals of 0.1°, we multiplexed the kinoforms of a dice model rotated by different angles in the same location on our VHP. One kinoform is shown in Figure 2(a). Ten 3D perspectives were reconstructed clearly without crosstalk, expanding the SBP by a factor of 10 compared with traditional 3D displays: see Figure 2(b). The SBP could theoretically be expanded far beyond this using angular multiplexing. 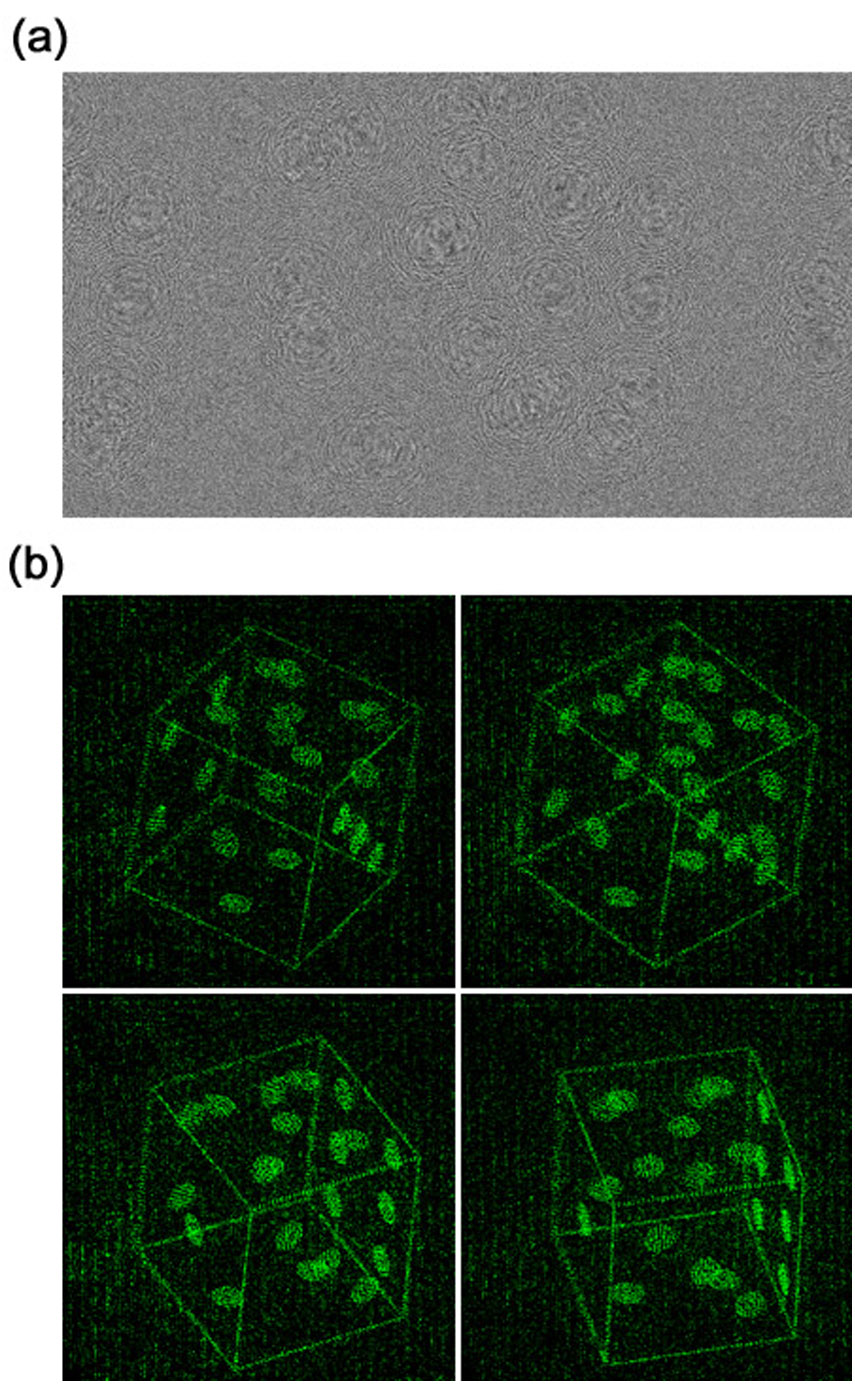 Figure 2. (a) A kinoform of the dice model. (b) The 3D dice model reconstructed holographically at different angles.

In summary, we have developed a system capable of recording angularly multiplexed visual information on volume holographic polymer films using computer-generated kinoforms. In the next stage of our research, we plan to develop a miniaturized holographic display system with an SBP improved by two or three orders compared with traditional 3D display methods. We also intend to apply wavelength multiplexing for RGB (red, green, blue) wavelengths, enabling the realization of a truly colorful holographic display.

Liangcai Cao received his PhD in optical engineering in 2005 from Tsinghua University, where he is now an associate professor. His research focuses on the principles and applications of holography for information storage, processing, and displays. He has over 50 papers published and holds more than 10 patents.