Holograms—optical reconstructions of pre-designed images—are widely used on credit cards and other security items. Their application is limited, however, by the constituent materials used (typically polymeric), which often trap their working range within the visible electromagnetic region. Moreover, traditional holograms do not respond to changes in the polarization of incident light. In recent years, sub-wavelength artificial structures with tailored anisotropic optical properties (meta-materials)1have enabled the development of meta-holograms that show polarization-dependent optical properties in tunable frequency regions.2–4

Figure 1(a) shows the schematic setup of our meta-hologram under 45° linearly polarized illumination.5 The meta-surface (extremely thin meta-material) was designed using a computer-generated hologram (CGH) method based on Fourier-transform algorithms.6 The basic elements of this meta-surface are gold cross nanoantennas (50nm-thick and 60nm-wide) of varying lengths. They lie along both perpendicular and horizontal directions and are patterned on top of a 50nm layer of magnesium fluoride, which was sputtered onto a 130nm-thick gold mirror: see Figure 1(b). Owing to the surface plasmonic excitations that occur upon interaction with incident photons, these nanoantennas are capable of reconstructing polarization-dependent holographic images. The reflected phase of light varies depending on the cross length. We selected four cross sizes (60, 105, 125, and 209nm), which correspond to reflection phases separated by 90°, thereby creating a four-level phase meta-hologram. 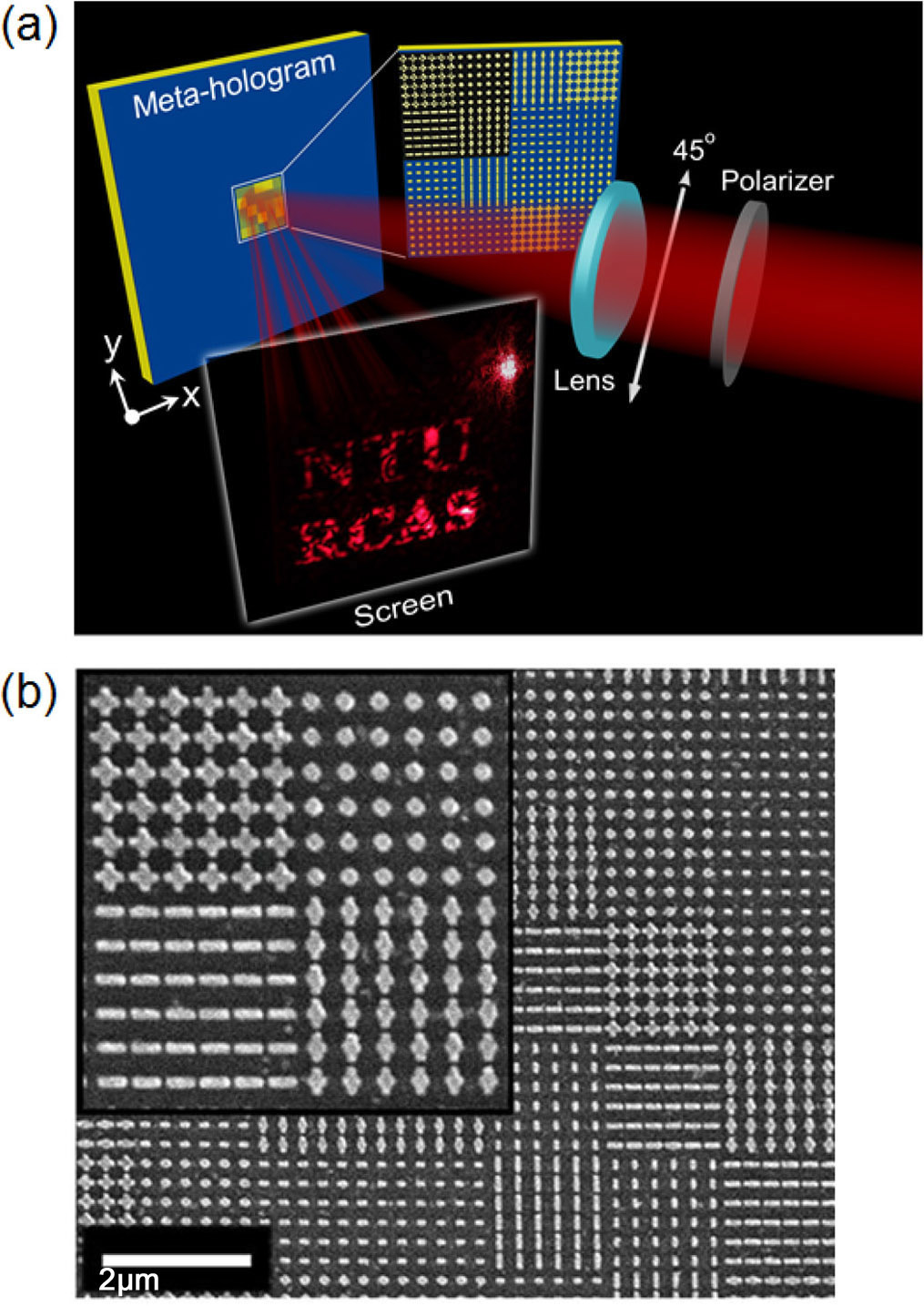 Figure 1. (a) Illustration of our meta-hologram under 45°linearly polarized illumination. The phase distributions of the two images, ‘RCAS’ and ‘NTU,’ are recorded on the meta-hologram sample by e-beam lithography. Pixels made from 6 × 6gold cross nanoantennas of various sizes were patterned on a 50nm-thick magnesium fluoride spacer sputtered onto a gold mirror. (b) Scanning electron micrograph of the meta-hologram sample, made up of nanocrosses with different orientations. The inset shows a higher magnification (1.7×).

Using our optical measurement setup—see Figure 2(a)—and several light sources with different wavelengths, we were able to characterize the performance of our plasmonic meta-hologram. We mounted the meta-hologram sample on a rotation stage, allowing adjustment of the incident angle (θ). Three far-field diffraction images of the meta-hologram under x-, 45°- and y-polarization, with θ=15° (using a 780nm laser), are shown in Figure 2(b–d). As the laser beam polarization is rotated from the x- to the y-direction, the projected patterns smoothly transition between our two images (‘NTU’ and ‘RCAS’) and the intensities of the two patterns rise and fall according to the degree of polarization alignment. We obtained a measurement of the power of the first-order NTU image by placing a lens at the location of the image, to focus the diffraction light into a photodiode. The diffraction efficiency varies as a function of wavelength and the angle of incident light. At θ=15°, we recorded an efficiency of 18%. As θ increases, the meta-hologram efficiency reduces slightly. At an incident angle of 45°, the efficiency drops to 8.5%. 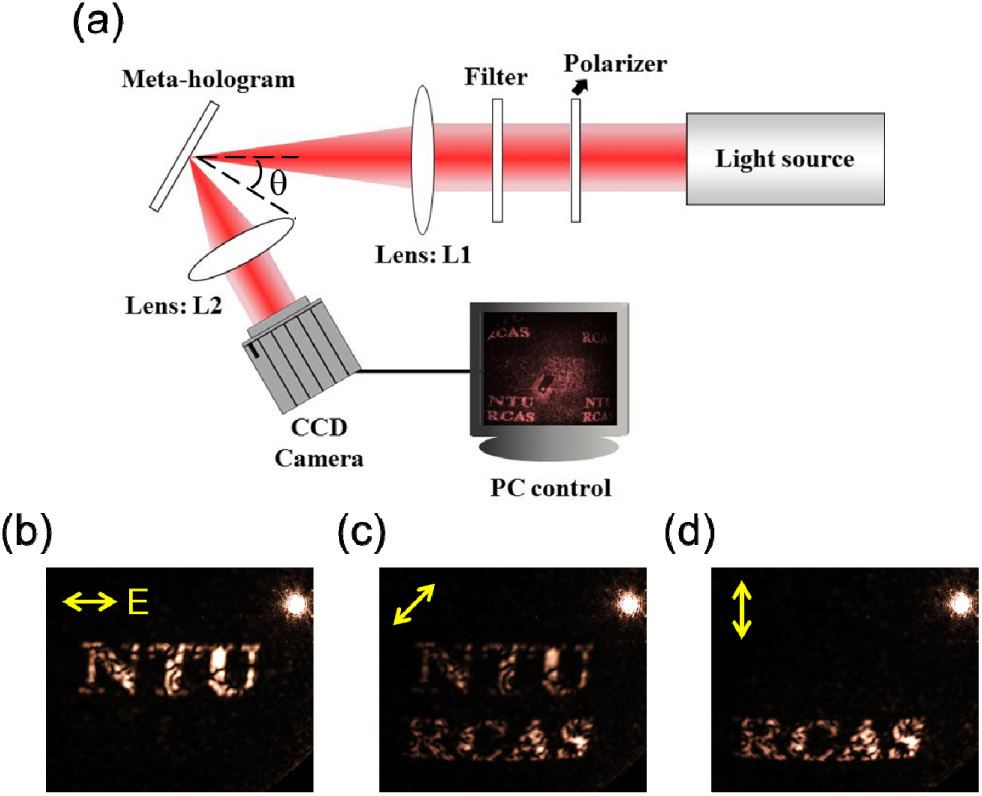 Figure 2. (a) The measurement setup for the reconstruction of the holographic images. The reconstructed image under (b) x-, (c) 45°-, and (d) y-polarized light, using a 780nm laser with an incident angle θ=15°.

These images can also be reconstructed using a broadband incoherent light source. Figure 3(a) and (b) shows images taken by a charge-coupled device under x- and y-polarized incoherent light illumination, respectively, using gamma correction (γ=0.7) for optimal visual clarity. Unlike the images produced by the coherent laser beam—see Figure 2(b–d)—the reconstructed letters are not speckled. However, owing to the chromatic dispersion induced by the broadband light source, the projected patterns are blurrier. Figure 3(c–e) shows the NTU images obtained by applying a bandpass filter with pass regions at λ=700±20nm, 600±20nm, and 550±20nm. These pass regions enable close examination of the images reconstructed with illuminations at specific wavelengths. The image obtained using a 550±20nm bandpass filter—see Figure 3(e)—has the lowest efficiency, because of the higher absorption loss for gold in this shorter wavelength region. Nevertheless, the broadband functionality and coherent-independent optical properties of our meta-hologram are clearly demonstrated. According to theoretical calculations, the spectral range of our meta-hologram spans ∼800nm, from visible to near-IR wavelengths.5 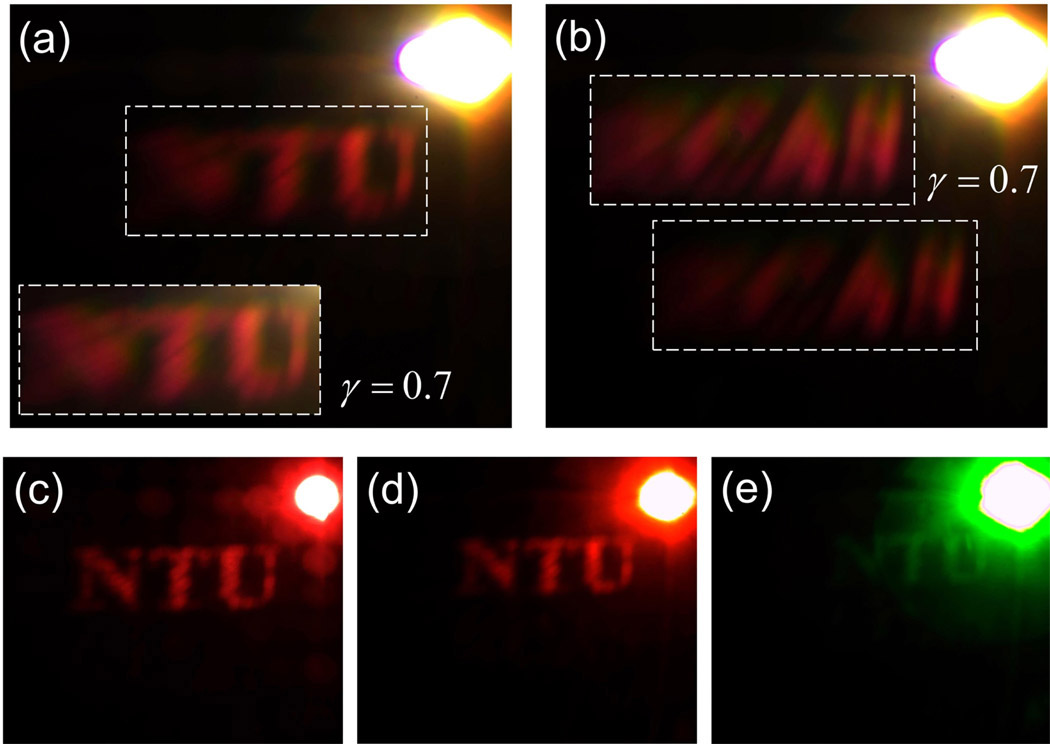 In summary, we have proposed and demonstrated a meta-hologram that enables polarization-controlled images, a broad working spectral range, and a high tolerance to variation of the incident angle and light incoherence. In future work we intend to develop a hologram with RGB colors, as well as active phase-controlled devices with switching frequencies much larger than those found in spatial light modulators. Such a system could be useful for applications that include security identification, data storage, and laser beam wavefront shaping.