New tools can be used to design optical systems for redirecting and redistributing light in a prescribed manner.
13 October 2014
Vladimir Oliker

When light sources and/or targets and input and/or output radiation patterns lack special (i.e., rotational or rectangular) symmetries, freeform optical surfaces must be used in their design. In such cases, traditional designs—constrained by the use of a particular symmetry—may lead to highly energy inefficient devices. Freeform lenses and mirrors are surfaces that are designed without any a priori assumed symmetry. They therefore provide significantly more degrees of freedom to create an optical system with the desired characteristics. Many applications in non-imaging and imaging optics—such as solar collection, illumination, laser beam shaping, and antenna design—may benefit from the use of freeform optics. In these applications, the optical surface (or a system of surfaces that may be lenses or mirrors) is required to redirect and reshape the radiance pattern of the source so that the output irradiance is concentrated onto a given target set and has a prescribed pattern. Such design problems are known as ‘prescribed irradiance problems’1 (an example of one is shown in Figure 1). 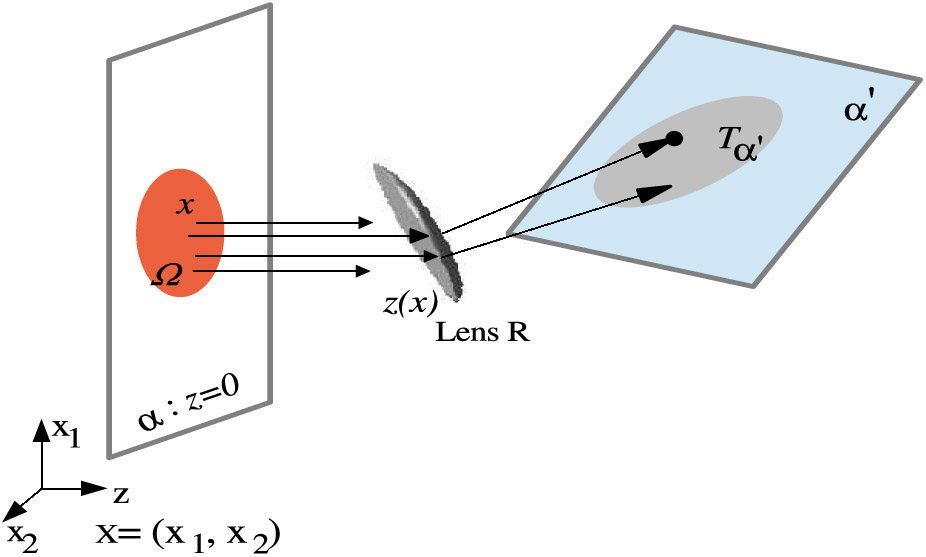 Figure 1. Schematic drawing of a single-element plano-freeform lens to be determined in a prescribed irradiance problem. A collimated light beam with cross section Ωpropagates in direction z. The goal of the design is to determine the lens R, which intercepts the beam and redistributes the light with prescribed irradiance distribution over a given region Ta ′ in 3D space. In the figure, for simplicity, Ta ′ is on some plane α′and the input and output irradiance patterns are not shown. The plane α ′ can be replaced by a surface, and then Ta ′ is a region on that surface. Only the (active) curved side of the lens is shown. The inactive planar (left) side of the lens is not shown. The lens is described by the function z(x),which needs to be determined. Only two complete paths of light rays between αand α ′ are shown.

In the geometrical optics approximation and for small sources and collimated beams, a systematic application of ray tracing equations and energy conservation law reduces prescribed irradiance problems for freeform optical surfaces to establishing conditions for solvability and finding numerical solutions to strongly nonlinear second-order partial differential equations.1–5 Alternative formulations of such design problems are also sometimes possible. For example, when the desired irradiance pattern is in the far-field, or when two refracting/reflecting surfaces are used, we have previously shown that the design problems can be formulated as linear programming problems.6–8 The same formulation for a single lens in a near-field case, however, is impossible.9 In either of these formulations, if rotational symmetry is not assumed, the resulting equations are far from standard. The theory and computational methods for reliably solving these equations require the most advanced mathematical tools, many of which have not yet been developed. Finding numerical solutions to such problems is therefore particularly difficult. Reasonably accurate discretization of such design problems, because of their underlying strong nonlinearities, requires very fine meshes. These meshes represent the light source and its radiation pattern, the target set, the required target radiance, and the solution. The algorithms and their implementation codes must therefore solve a large number of equations that relate the data on the source with data on the target, and are consequently very complex.

We have recently developed a very general approach to the design of freeform optics for prescribed irradiance problems.3, 6–8,10 This approach is based on rigorous physical and geometric principles, combined with ideas from calculus of variations, as well as on novel, extremely efficient, and provably convergent computational methods that solve very large systems of nonlinear equations. Our approach does not require any symmetry assumptions, and produces a solution for a design problem that approximates the exact solution with any a priori given accuracy, i.e., it effectively finds the exact solution. In addition, the solution does not depend on ad hoc constructions or on optimization of ad hoc merit functions.

The methods we have developed are applicable to near- and far-field problems, and can be used to design optical systems with one and two freeform lenses or reflectors. With two lenses (or reflectors) it is possible to control the output irradiance and the optical path length. Our methods, in their present form, can be applied to optical systems with small or collimated non-isotropic sources, with no restrictions on the target shape and irradiance distribution. For optical systems with one and two lenses, we have implemented these new developments into codes, and we now have efficient, accurate tools for solving important classes of prescribed irradiance problems.

We have applied our methodology to the design problem illustrated in Figure 1, i.e., to design a freeform single lens that converts a collimated light beam into an output beam, which irradiates with a prescribed pattern at a given near-field target in 3D space. The quantitative conditions for the existence of solutions to this problem have previously been established.11 For this problem, our code took three hours and four minutes on a standard desktop computer to solve 2.840236926 × 109 nonlinear equations. We modeled the input beam—shown in Figure 2(a)—with 247,969 point sources that radiated in the z-direction and were uniformly distributed over a circular disk of radius 4.05mm on the plane α={z=0} centered at (0, 0). The total radiance of the input beam was equal to the total required radiance distribution on the target. We modeled the detector screen as a set of 11,454 pixels that were uniformly distributed over the rectangle shown in Figure 2(b).

Figure 2. The input beam is a circular collimated beam of radius 4.05mm with uniform irradiance propagating in the direction of the z-axis (east). A cross section of the beam is shown in (a). We want to design a lens creating a gray-scale image of Mona Lisa on the plane α′as shown in (b); the z-axis in (b) is directed north. The dimensions of the rectangle are 55×22 .7 mm. The unit normal to the plane of the rectangle is

. The side view of the designed freeform lens redirecting and redistributing the radiance is shown in (c); the z-axis in (c) is directed east. Panel (d) shows the redistributed light irradiance in 3D space producing a synthetic image of Mona Lisa. The z-axis in (d) is directed north. Observe that (d) shows the (‘mirror’) reflected image of Mona Lisa. This is because the lens is between the z=0plane and the plane α′; the lens is not shown in (d). The illuminated side is visible from the z=0plane. Because of transparency it can also be seen from the top of (d), but the observer sees the reflected image. The figures are not to scale. No smoothing or despeckling was performed on the image.

We used numerical tracing of light fluxes to simulate physical propagation of light through the lens. Instead of tracing weighted single rays, however, we developed an original method for tracing fluxes that are associated with area elements, into which the entire cross section of the input beam was decomposed. For this particular example, we used 494,214 of these area elements. This task was completed in eight minutes and seven seconds of central processing unit time on a standard laptop. The total flux incident on the lens was redistributed on the target image, and thus we achieved a 100% collected energy efficiency for the designed lens. The relative root mean square radiation deviation was about 6%. This parameter indicates the numerical validation of the radiance distribution accuracy of the designed lens, relative to the prescribed radiance values.

We also performed a test of the resolution capabilities of our code on a checkerboard (see Figure 3). For this test, our code took three hours and one minute of computing time on a standard desktop computer to solve 2.031362048 × 109 nonlinear equations.

Figure 3. The original (prescribed) image for the checkerboard is on the right. The checkerboard on the left is obtained by tracing the fluxes through the designed lens shown in Figure 4. The lens reshapes a parallel, circular light beam with uniform intensity into a light beam generating the pattern on the left on a detection screen perpendicular to the z-axis at 150mm from the reference plane α={z=0}. The input beam is the same as in the case of the image of Mona Lisa: see Figure 2(a). The figures are not to scale. No smoothing or despeckling was performed on the left image.

Figure 4. Side view of the lens. The z-axis (blue in the color version) is directed northeast.

We have developed a novel approach to the design of freeform optical surfaces that redirect and redistribute irradiance in a prescribed manner. We have illustrated our approach by designing an optical system with a collimated light beam and a single lens, which transforms the incident light so that a synthetic image of Mona Lisa is created on a skewed detection screen. A test of our code's resolution capabilities was performed on a checkerboard. The computed results were validated by numerical tracing of fluxes through the designed optical systems. We now plan to develop implementations of our approach into codes for the design of systems with freeform reflectors, in particular, freeform reflector antennae. We expect that the software we have developed will be a useful tool for engineers and researchers working on design problems in optics and electromagnetics. The work presented here is based on a previous paper.10

This project was financially supported in part by the US Air Force Office of Scientific Research.

Vladimir Oliker received his PhD in mathematics from Leningrad University, USSR (former Soviet Union). He has published over a hundred papers in the fields of pure and applied mathematics. Since 1984 he has been developing theoretical and computational methods for the design of freeform optics.