The photonic spin Hall effect (SHE) manifests itself as spin-dependent spatial splitting of left- and right-handed circularly polarized components when a spatially confined light beam is reflected or transmitted at an interface.1–3 This interesting phenomenon is generally believed to result from an effective spin-orbit coupling that describes the mutual influence of the spin (polarization) and the trajectory of the light beam.4–6 Remarkably, thespin-dependent splitting in photonic SHE is sensitive to the physical parameter variations of different systems and holds great potential for applications in precision metrology. However, the splitting leads to displacement too small to be detected directly.

We have used a precise signal enhancement technique called quantum weak measurement, which has attracted much research attention.7–13 Using quantum weak measurement, the photonic SHE can be detected with the desired accuracy to determine the corresponding physical parameters. In our recent work, we found that the photonic SHE can be an effective way of measuring the thickness of a metal nanofilm14 and identifying the number of layers of graphene.15

A schematic diagram of the weak measurement experimental process is shown in Figure 1. Our sample is a BK7 (specialist glass) prism covered with a metal or graphene nanofilm. A Gaussian beam generated by a helium-neon laser is first focused by the lens (L1) and selected as horizontally or vertically polarized by the polarizer (P1). When the light beam reflects from the sample interface, the photonic SHE splits the left- and right-handed circularly polarized components in the y-direction, corresponding to transverse displacement. In quantum mechanical terms, this process is a weak interaction coupling the observable and the measurement equipment. The beam then passes through the second polarizer (P2), where it is once again selected approximately as vertically or horizontally polarized. At the surface of the second polarizer, the two spin components experience destructive interference, making the enhanced shift in the meter much larger than the initial one. Calculating the reflected field distribution yields the amplified shifts of the photonic SHE. After passing through the second lens (L2), a CCD is used to capture the optical signal and measure the amplified shifts.

We first used the photonic SHE to measure the thickness of a metal nanofilm.14 We found that the spin-orbit coupling in the photonic SHE can be effectively modulated by adjusting the film thickness. In addition, the transverse displacement is sensitive to the thickness (in a given range) of the metal film for a horizontally polarized light beam, and a large negative transverse shift can be observed. We measured the amplified displacements of light beam deflection on a BK7 glass substrate coated in three different thicknesses (10, 30, and 60nm) of silver film. 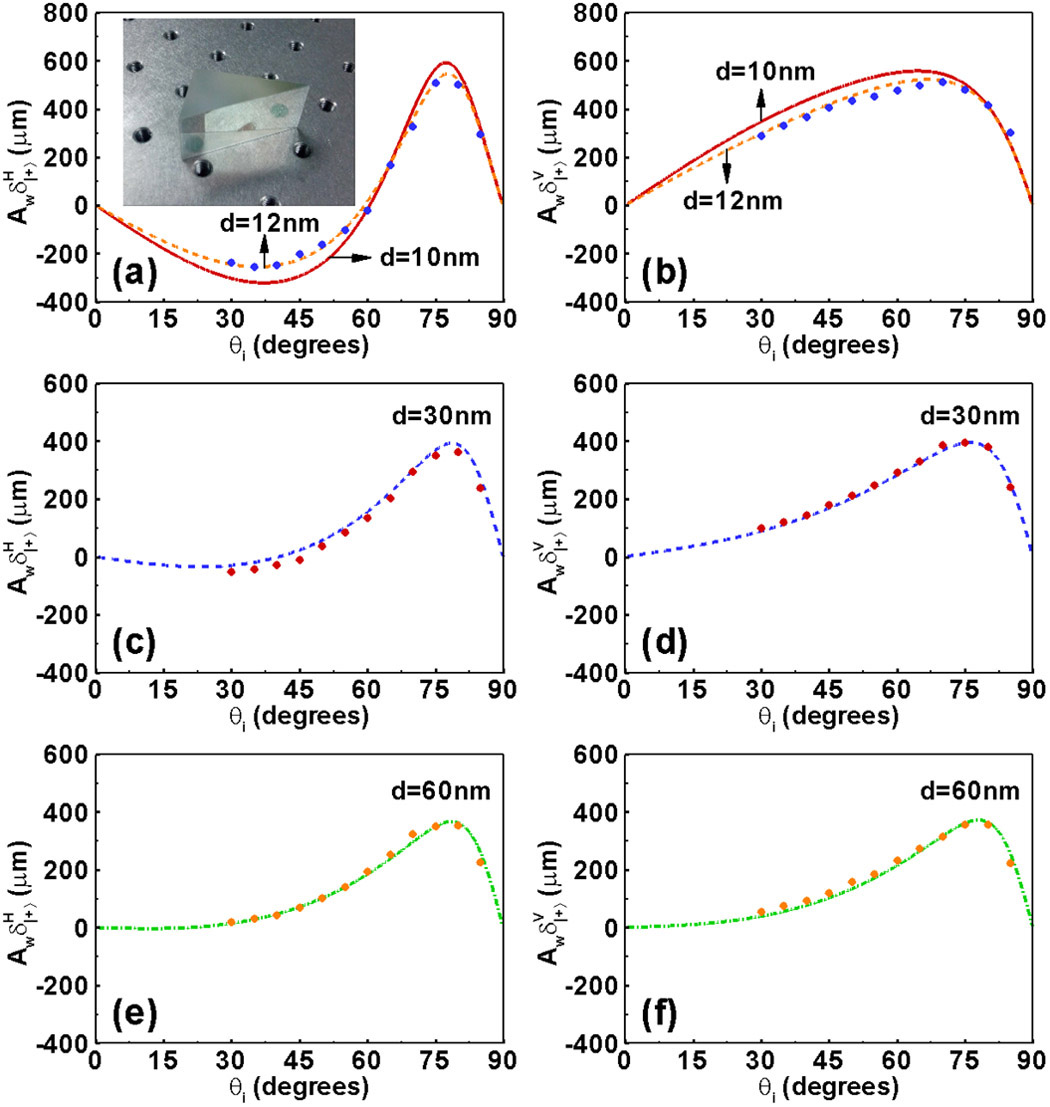 We also propose using the photonic SHE to identify the number of layers of graphene in a sample.15 A quick and convenient technique for counting the layers of graphene film is important for accelerating the material's study and exploration. Many methods exist, but they all have limitations.16–18 We have found that the photonic SHE is sufficiently sensitive for this purpose.

First we need to calibrate the system by establishing the relationship between the spin-dependent displacement and the number of graphene layers. To do this, we need to know the refractive index of graphene, which is complex, nonlinear, and dependent on wavelength and the graphene thickness.19 We calculated its value as 3.0+1.149i for light of wavelength 633nm, and showed experimentally with one- and two-layer graphene films that this value is appropriate for films with few layers. It should be noted that experimental conditions prevent us from precise fabrication of graphene with more than two layers. In this example, we know just the approximate number of layers (three to five). To determine this more precisely, we measure the photonic SHE transverse displacements with the incident angle changing from 56 to 62° (see Figure 3). To avoid the influence of impurities and other surface quality factors of graphene film, we carried out the experiment for three different areas of the graphene sample and concluded that there are actually three layers in the film. 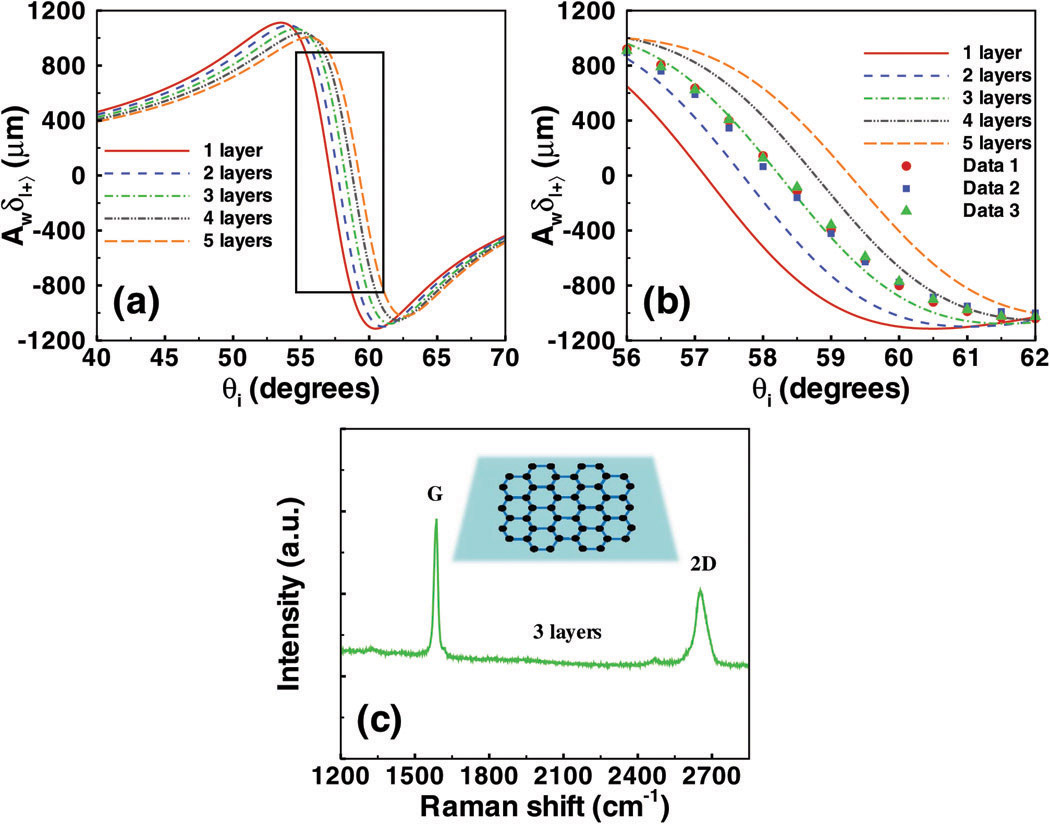 This research was partially supported by the National Natural Science Foundation of China (grants 61025024 and 11274106) and the Hunan Provincial Innovation Foundation for Postgraduates (grant CX2013B130).