The latest demands of the optoelectronics industry, which has undergone drastic change in recent years, include increasingly high-resolution displays and cost-effective photonic devices with reduced power consumption. Due to the high cost of the relevant materials and fabrication methods, these requirements present a huge challenge. Ferroelectric liquid crystals (FLCs), which are capable of fast switching speeds at low driving voltages, represent a promising candidate for the realization of such devices. However, due to several limitations (e.g., geometrical, optical, and mechanical instabilities), FLC structures are currently less popular than nematic and other liquid crystals.1–5

In FLCs, the smectic layers (characterized by molecules that self-organize into parallel sheets) lie perpendicular to the glass substrate. This alignment is easily destroyed by thermal undulations or mechanical shock, which can degrade the optical quality in FLCs. Another critically important effect that must be overcome is diffraction in the dark state of the FLC cell.4 This diffraction is caused by the periodic structure of the material, which is created by both the ferroelectric domains and the helical pitch of the system. Such diffraction is a core issue for projection displays and photonic elements.

The dark state diffraction can be reduced by decreasing the spontaneous polarization and alignment conditions, thereby suppressing the ferroelectric domains.5 Moreover, we have recently discovered that good optical quality can be achieved in FLCs with a helical pitch smaller than their cell thickness, in association with photo-alignment by irradiation. This combination leads to high contrast without the generation of diffraction lobes. Our nanoscale photo-alignment process relies on the diffusion of molecules using a sulfonic azo dye (SD1) to create a preferred alignment direction. Alignment uniformity increases with the applied irradiation energy.4, 7–9 Varying the dose of irradiance (from 0 to 15mJ/cm−2) offers control over the anchoring energy (5–10×10−4J/m2), enabling a good balance to be struck between the elastic energy of the FLC helix and the normalized anchoring energy.1, 8 In addition, the selection of a material that offers helix unwinding only in the presence of an electric field (i.e., electrically-suppressed-helix ferroelectric liquid crystals, ESHFLCs) is crucial. Light leakage in the dark state that would otherwise occur due to geometrical defects is thereby avoided and contrast is increased. By using photo-alignment to achieve a good balance of elastic and anchoring energies in ESHFLCs, we obtained high contrast ratios of >10k:1 at a driving frequency of up to 3kHz under an extremely small applied voltage.1–5, 8,10 Figure 1(a) shows the contrast ratio and the voltage-dependent electro-optical response of our ESHFLC cell. The peak in the response curve corresponds to the critical voltage for helix unwinding. 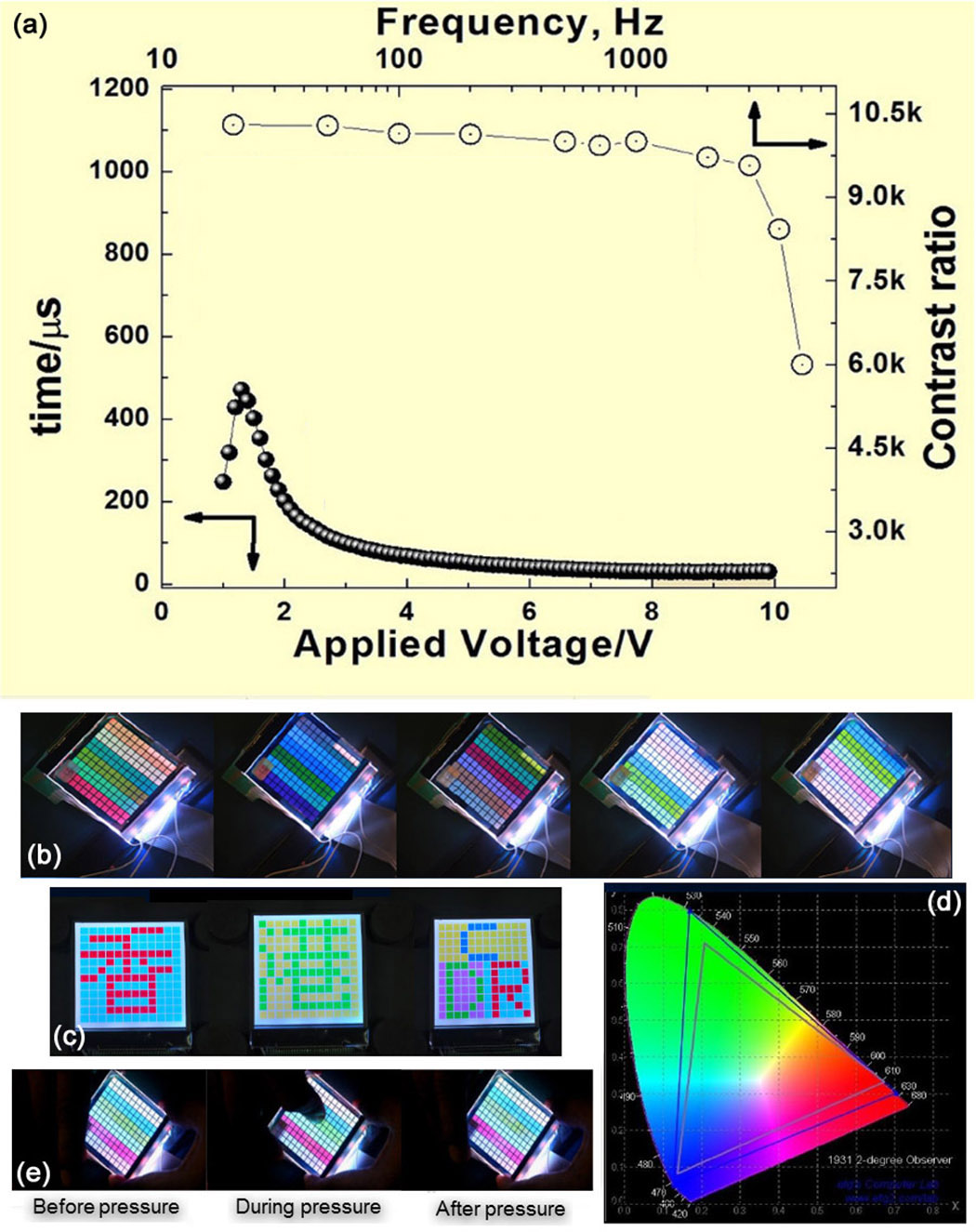 Figure 1. (a) Electric field dependence of the response time (•) and frequency dependence of the optical contrast (°) in our electrically-suppressed-helix ferroelectric liquid crystal (ESHFLC) cells, at a driving voltage of 1.5V/μm. Examples of the (b) 24-bit colors and (c) color images obtained using ESHFLCs. (d) The color triangle of the ESHFLC display (larger triangle) compared to the NTSC gamut (gray triangle). (e) The image quality before, during, and after mechanical pressure, showing no deterioration.6,7

We have applied this technique of nanoscale photo-alignment in ESHFLCs to develop a concept for a field sequential color display (FSCD). This display is characterized by 8-bit grayscale, a color triangle of ∼130% of the NTSC gamut, a high contrast ratio, fast switching between bright and dark states, and low voltage operations: see Figure 1(b) to (d). Furthermore, our ESHFLC shows good shock stability. Figure 1(e) includes pictures before, during, and after the application of mechanical pressure. The system restores several seconds after this mechanical shock.1, 2

SD1 also allows the easy axis of the liquid crystal to be rewritten by using a different polarization plane to alter the preferred direction of the liquid-crystal molecules.3, 7,8 This enables two or more alignment domains to be present within the ESHFLCs, resulting in a periodic distribution of the refractive index through the material. An FLC grating can be produced in this way, with a 1D or 2D distribution of alignment domains: see Figure 2. Other photonic elements that rely on the same principle, such as the Fresnel lens and circular Dammann grating,9 have also been proposed. Furthermore, in association with photo-alignment, ESHFLCs could be used to introduce microchannels and microcapillaries within photonic crystal fibers.7

Figure 2. The ESHFLC grating, 1D and 2D.3 (a) Schematic of the alignment in two alignment domains, showing the periodic distribution of the refractive index through the material. Optical microphotographs for (b) 1D and (c) 2D diffraction gratings in an ESHFLC cell of thickness 1.5μm. The bright state of (d) 1D and (e) 2D gratings, and (f) the dark state for both of the gratings. The intensity profiles for (g) 1D and (h) 2D ESHFLC gratings.6 ITO: Indium tin oxide.

In summary, we have developed FLCs with high optical quality and contrast through a combination of photo-alignment and an electrically suppressed helical pitch. Due to the lack of diffraction exhibited by ESHFLCs, the methods used in their fabrication have wide potential in the development of a variety of photonic elements. We are currently working on the optimization of multiple domain alignment for more efficient displays and believe that we can increase the light efficiency of our devices from 15% to over 25%.

Abhishek Kumar Srivastava received his PhD from the University of Lucknow in India. His current research focuses on photo-aligned FLCs for displays and photonics applications. He has authored 86 research papers and holds 14 patents and patent applications.