Global navigation satellite systems (GNSS), including the well-known Global Positioning System, are widely used for localization purposes. In these systems, radio signals are transmitted from orbiting satellites. The received signals are used to derive the range (i.e., distance) to the individual satellites. The precise location of the user can then be determined through triangulation methods. The received signals, however, are very weak and can be further suppressed by obstructions such as buildings and trees. Conducting range measurements and localization of the user is therefore often impossible.

Navigation using GNSS is commonly aided by combining the measurements with other data. For example, data from GNSS can be combined with data from inertial navigation systems (INS),1 cameras, or wireless communication systems (WiFi).2, 3 Most navigation systems are designed to be used by a single person or autonomous guided vehicle (AGV). A more interesting situation is also conceivable, in which a group of AGVs—which may have occasional encounters with each other—are performing a collaborative task.

We have considered this type of situation in recent work.4 Each AGV is equipped with its own combined INS/GNSS navigation system. According to general practice,1 we use a Kalman filter to blend the information from the INS and GNSS and to keep track of the position, velocity, and attitude (the so-called navigation state) of each AGV. These systems also keep track of the uncertainty of the navigation state. If, during an encounter between two AGVs, they detect that they are very close, it may be determined that they have the same approximate position. The distance between the two AGVs depends on the expected detection range (see Figure 1). After the encounter, the AGV that has a lower uncertainty on its position can act as a 'beacon' to the more uncertain AGV. These detections therefore generate new shared information that was not available before the encounter. We have developed a new method in which this information can be used to improve the estimated navigation states. 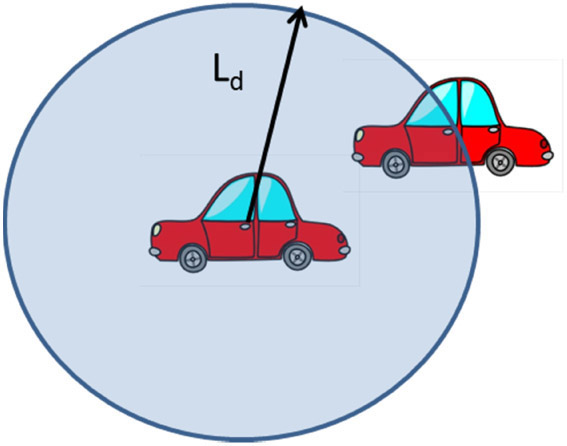 Figure 1. Cartoon illustrating the situation when two objects (e.g., cars) are in close proximity. An encounter is detected if their relative range is less than the expected detection range, Ld. After this encounter is detected, new navigation-related information is available.

We have formulated a mathematical relationship to combine the INS/GNSS information for each AGV with the encounter information. This equation relates the new type of information with the navigation states of the AGVs, i.e.,

is the difference between an actual measurement and a predicted—based on the estimated navigation state—measurement,

We built a simulation model of two (one for each simulated AGV, A and B) loosely coupled INS/GNSS navigation systems to test our method of distributed and possibly cooperative navigation. As shown in Figure 2, each AGV followed its own simulated trajectory. After a certain amount of time we simulated a GNSS outage, which caused the GNSS position information to be lost. Due to small inertial sensor errors and noise, there was then some INS drift. Once the GNSS outage ended, the navigation system quickly regained its accuracy. An encounter between the AGVs during the GNSS outage (about 45s after the start of the simulation) was detected. The results of the corrected position (and the uncertainty on the position of each AGV), based on the newly acquired information from this encounter, are shown in Figure 3. After the encounter, AGV B had a high certainty on its position and acted as a reference for AGV A. The position error of AGV A was therefore quickly reduced (the position error of AGV B was already low and did not improve significantly). 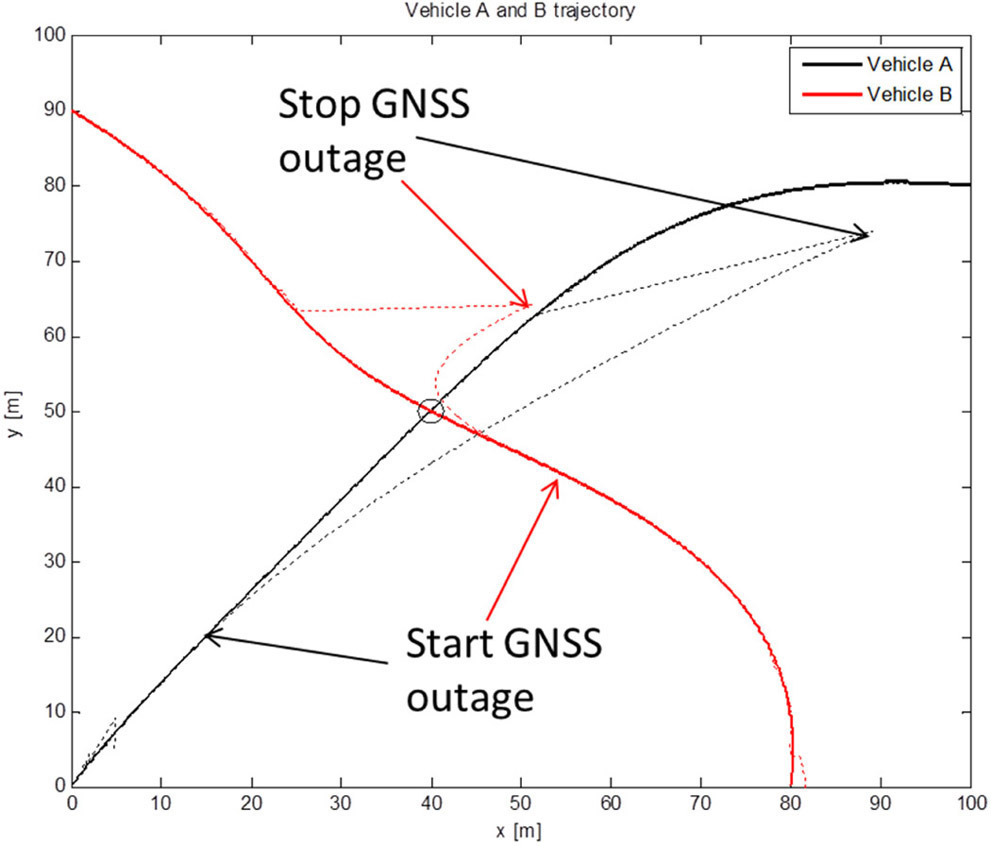 Figure 2. Plot of baseline (‘true’) trajectories for vehicle A and B, in x and y directions. Dotted lines represent estimated trajectories where simulated global navigation satellite system (GNSS) aiding was lost and there was resultant inertial navigation system (INS) drift. Once GNSS recommences, the drifted positions are quickly corrected. 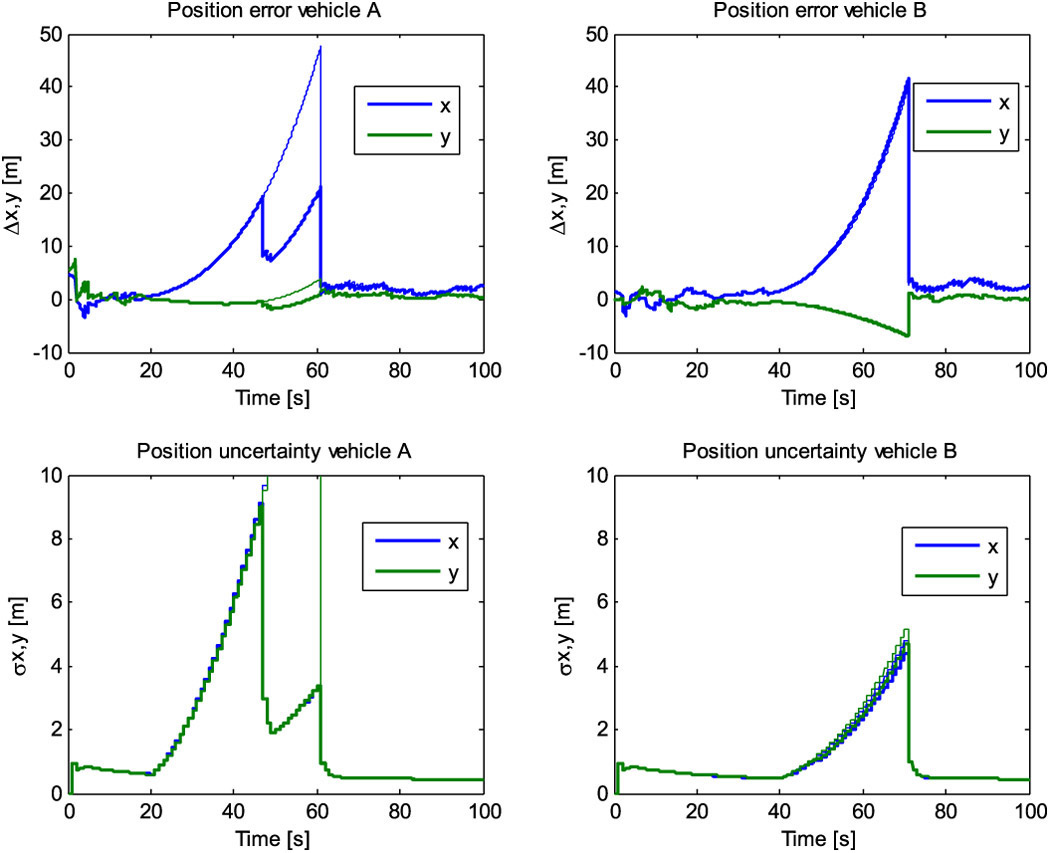 Our preliminary results indicate that encounter information can be used to aid a standard INS/GNSS navigation system when there are GNSS outages. We predict that more encounters, involving more than two AGVs, will produce even better results. It is also possible that unattended AGVs could be programmed to deliberately encounter one another when the position uncertainties are great. This would represent a new and effective means of cooperative navigation.

We have formulated and tested a new combined INS/GNSS navigation technique. Information acquired during encounters between two AGVs help reduce positional drift during GNSS outages. We are now planning to perform further simulations of our model with an increased number of vehicles. We hope to understand the level of navigation improvement as a function of vehicle number and number of encounters. In the future we will also be conducting practical tests of a real INS/GNSS system in densely built environments.

Marcel Ruizenaar graduated in 1985 with a BSc. He has worked at TNO for 27 years. He is now setting up a research team that will focus on the field of robust navigation. He is also the inventor of several patented localization and new sensor concepts.