Membrane-wrapped gold nanoparticles designed to have specific surface properties have been used to investigate and mimic complex viral processes.

Because of their size compatibility with cellular structures, nanoparticles of various chemical compositions have found use as imaging and contrast agents in diverse detection schemes. The interactions between nanoparticles and cellular systems are the subject of intense research.1,2 Of particular interest are nanoparticles that act as biomimetic nanostructures (that is, they mimic features of natural biological objects) and whose composition can be rationally controlled. Synthetic control over the nanostructure provides unique opportunities for testing and characterizing the biological function of specific components whose intricate role is otherwise difficult to decipher.

In recent work of this type, our group generated artificial virus nanoparticles (AVNs) to investigate certain processes involved in the interaction between human immunodeficiency virus 1 (HIV-1) particles and dendritic cells, a part of the immune system. In particular, we probed the role of a molecule known as GM3 (which occurs on the surface of HIV-1 particles) in facilitating the uptake of HIV-1 particles by dendritic cells.3 The structure of HIV-1 and two AVNs designed to imitate it are outlined in Figure 1. Our general strategy was to combine the functionality of self-assembled lipid bilayers (AVN1) or monolayers (AVN2) with the superb photophysical properties of noble-metal nanoparticles. The specific aim of our study3 was to use these materials to probe the role of glycosphingolipids such as GM3 in the glycoprotein-independent binding and uptake of HIV-1 particles by cells.4 The materials and methodologies described can, however, be applied to characterize a wide range of nanoparticle-cell interactions.

Figure 1. Schematic of human immunodeficiency virus 1 (HIV-1) particle (left) and two flavors of artificial virus nanoparticles, AVN1 and AVN2 (right). Each flavor of AVN can be made with either the ganglioside GM3 (which occurs in the membrane of HIV-1) or galactosyl ceramide (Gal-Cer), which is similar but lacks a key component of GM3. AuNP: Gold nanoparticle. C18H37SH: Octadecanethiol. (Reproduced with permission.3)

The optical properties of gold and silver nanoparticles are determined by coherent collective electron oscillations, called plasmons.5 The plasmons result in large resonant optical cross-sections. Because their signal is based on scattering, noble-metal nanoparticles exhibit exceptional photophysical stability: they do not blink or bleach.6 Another property that makes noble-metal nanoparticles appealing for many applications is their ability to interact in the near field. If two nanoparticles come closer together than about one nanoparticle diameter, their plasmons couple, which results in a spectral redshift. The scattering spectra of gold and silver nanoparticles therefore contain information about interparticle separations and spatial distributions of the particles.5This distance dependence of the plasmon coupling at constant refractive index has been used to probe interparticle separations on deeply subdiffraction-limit length scales in various applications.1,5,7–9

For most nanoparticle applications in a biological context, the biological functionality of the particles depends on their surface properties. To mimic the enveloped virus particle of interest in our work, we wrapped noble-metal nanoparticles in a lipid membrane of defined composition.3Our particles did not contain any glycoproteins and therefore allowed an investigation of virus-cell interactions that occur independently of the glycoprotein gp120, which is a prominent component on the surface of HIV-1 particles. We are interested in how HIV-1 is captured and internalized by mature dendritic cells (mDCs),10 a key step for the transfer of HIV-1 particles from mDCs to T lymphocytes (T cells) in a process called trans-infection. It is known that this virus-capture mechanism is dependent on the interaction of GM3 and CD169, a molecule expressed on mDCs that binds to sialic acid, which is the terminal residue of GM3.4, 11 After uptake, the virus particles can often be found confined in specialized non-degradative compartments close to the cell surface.12 However, many details regarding the mechanisms underlying this specific virus trafficking behavior remain unclear.11

In our work,3 we focused on addressing the question of whether GM3-CD169 interactions alone were sufficient to recapitulate the virus trafficking phenotype. To that end, we assembled AVNs whose membrane contained the same main components to which we added either GM3 or galactosyl ceramide (Gal-Cer), which has a similar molecular structure as GM3 but lacks the terminal sialic acid residue. We then exposed samples of cells that have CD169 on their surface (i.e., CD169-expressing HeLa cells) to each of these types of AVN. We found that the GM3-containing AVNs bound to the cells whereas Gal-Cer-containing AVNs did not: see Figure 2(a). Our findings thus indicate that GM3-loaded AVNs bind selectively to CD169.

In the next step, we monitored the uptake and spatial distribution of GM3-loaded AVNs in mDCs. Figure 2(b) and (c) shows the dark-field images of two representative mDCs after 1h of incubation. Both cells show the formation of peripheral AVN clusters (marked by arrows). When mDCs were co-incubated with fluorescently labeled virus-like-particles (VLPs) and AVNs, extensive colocalization of these two types of particles occurred. As can be seen in the fluorescence image in Figure 2(d) and the overlay of VLP fluorescence and AVN dark-field images in Figure 2(e), the VLPs colocalize with AVNs in peripheral clusters. The optical colocalization suggests that the GM3-loaded AVNs trigger similar intracellular processing mechanisms in DCs as VLPs upon CD169-dependent capture. In additional experiments we verified that the AVN-containing compartments are not acidified, confirming that the AVNs are not collected in lysosomes (degradative compartments).

To characterize the intracellular distribution of the AVNs in more detail, we combined optical microscopy with focused-ion-beam scanning electron microscopy (FIB/SEM). In this approach, SEM images of the cells are recorded after ion-beam milling removes layers of cellular material. These experiments, which were performed in CD169-expressing HeLa cells, showed an enrichment of AVNs in a thin (tens of nanometers) layer below the plasma membrane (see Figure 3). 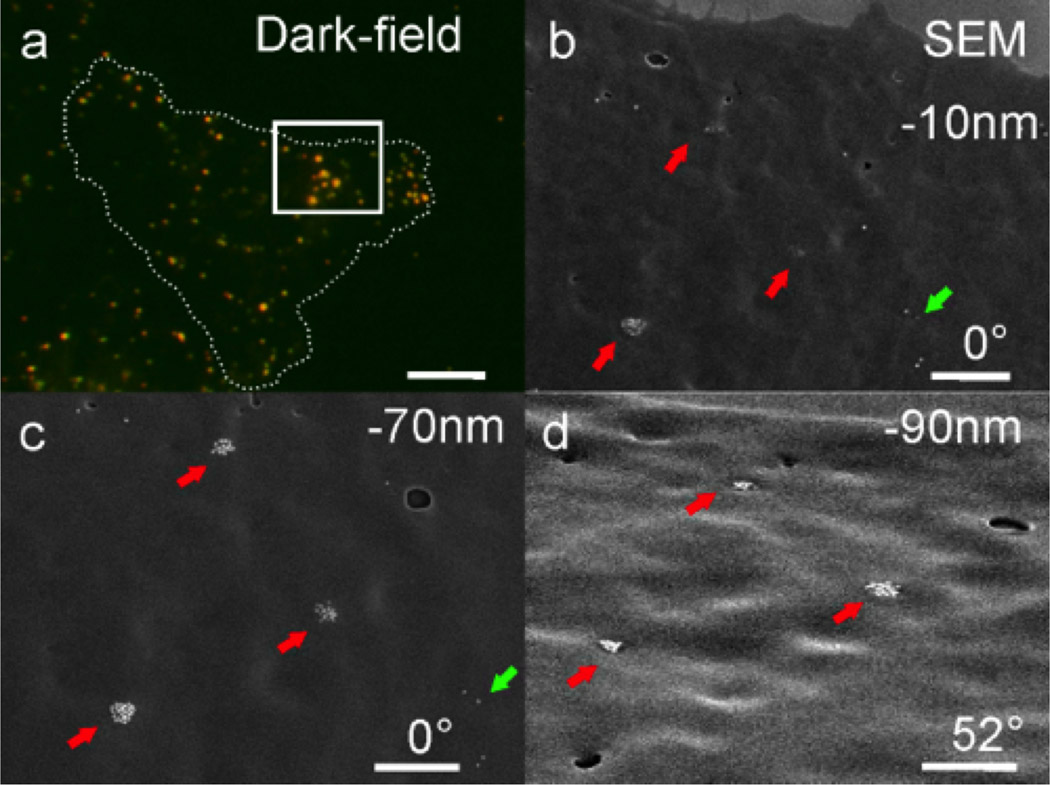 Together, the optical and SEM analyses confirm that GM3-containing AVNs recapitulate HIV-1 trafficking and segregation within peripheral compartments close to the plasma membrane in CD169-expressing cells. The successful mimicry of this characteristic spatial distribution pattern, which had previously been observed only for virus particles, through minimalistic virus model systems, has both fundamental and applied implications. In particular, it paves the way to new delivery strategies that can minimize intracellular cargo degradation by segregation in non-lysosomal compartments. CD169-expressing dendritic cells and macrophages are key cells of the immune system, and the ability to selectively target these cells through GM3-functionalized nanoparticles promises novel ways to enhance immunization strategies and treat diseases and infections. The ability to image the targeting process through plasmonic nanoparticles will be of great use in optimizing these new nanomedicines and elucidating the underlying cellular mechanisms.

Xinwei Yu received her BS in chemistry from Zhejiang University, China, where she worked with professors Ruikang Tang and Haihua Pan. She joined the Nano-Bio Interface Laboratory at Boston University in 2009 and became a PhD candidate in 2011. Her research focuses on developing novel AVN platforms for bio-imaging and delivery purposes, to understand virus infection mechanisms and to inspire potential therapeutic methods.

Björn M. Reinhard is an associate professor of chemistry and the director of the Nano-Bio Interface Laboratory of the Photonics Center. His research interests include fundamental aspects of photonic and plasmonic nanomaterials as well as their integration into enabling tools for investigating living systems and cellular processes.

Suryaram Gummuluru is an associate professor of microbiology. He earned his PhD in microbiology and immunology in 1996 from the University of Rochester Medical Center. Following a postdoctoral fellowship at the Fred Hutchinson Cancer Research Center in Seattle, WA, he joined Boston University School of Medicine in 2002. His research group is primarily interested in understanding the mechanisms of HIV-1 pathogenesis, with special emphasis on the interactions of HIV-1 with cells of the innate immune system.