Observing planet formation processes around nearby stars at mid-IR wavelengths

The formation of planetary systems from large rotating disks of gas and dust around young stars is one of the most fascinating and debated topics in contemporary astrophysics. A full understanding of the physics involved with planet formation can only be achieved using direct observational techniques. A key requirement is therefore to probe planet-forming systems at the spatial scales over which the material is assembled. This zone—the so-called Hill sphere—delineates the gravitational region of influence around a body. The aim of the Planet Formation Imager (PFI) project1, 2 is to design and build a telescope that can obtain resolved images of Hill-sphere-sized structures within candidate planet-hosting disks in the closest star-forming regions.

PFI will be optimized to study the major stages of giant planet formation, from initial dust coagulation, gap formation, evolution of transition disks, and mass accretion, to planetary embryos, and then eventual disk dispersal. The PFI facility will be designed to detect the emission of cooling newly formed (less than 100 million years) giant planets. Such capabilities will also permit spectral investigations and and provide an opportunity to observe the early dynamical history of planetary architectures.3

We are currently conducting concept studies for the PFI project, and focusing on defining the most exciting science questions to drive the instrument design and determine its feasibility. We expect that PFI will operate mainly at mid-IR wavelengths (about 10μm) so that dust emission in terrestrial planet formation zones, at about 300K, can be observed. When observing disks, even in the closest star-forming regions, we will require less than 0.1 astronomical units (AU) resolution (corresponding to an angular resolution of about 0.2 milli-arcseconds) to image circumplanetary accretion disks around Jovian-mass exoplanets (see Figure 1). 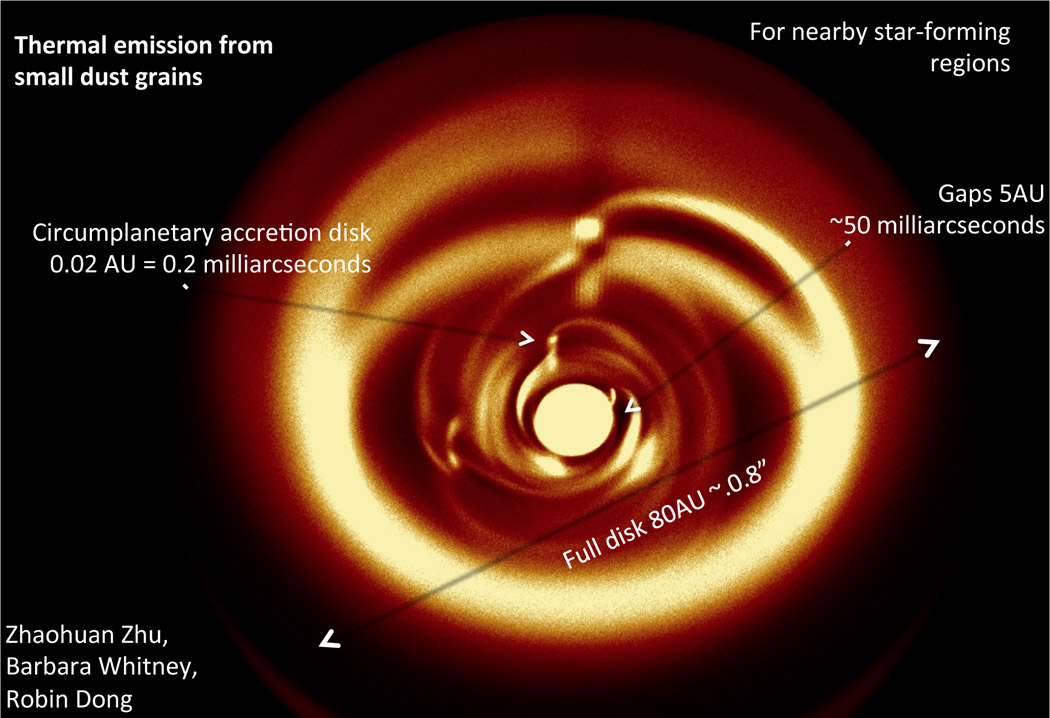 Figure 1. A radiation hydrodynamic simulation of a protoplanetary disk with four embedded Jupiter-mass planets. The simulated image is computed for a distance of about 100 parsecs and mid-IR wavelengths of about 24μm.3The Planet Formation Imager must be sensitive to dust emission, with temperatures of 300–3000K, on physical scales ranging from 0.1–50 astronomical units (AU). Such observations require a mid-IR interferometer with a kilometer-scale baseline. (Image courtesy of Robin Dong, Barbara Whitney and Zhaohuan Zhu.)

Although the likely PFI mid-IR wavelengths are shorter than the millimeter-scale observations of the Atacama Large Millimeter Array, they are much longer than the visible and near-IR wavelengths at which the new generation of extremely large telescopes will operate. Due to the diffraction limit, a mirror with a diameter of about 10km is required to achieve the desired angular resolution with a conventional telescope for PFI. Such a mirror is obviously a distant hope. We instead require a many-element long-baseline interferometer to achieve the angular resolution. A kilometer-scale mid-IR interferometer is a natural development of current single-aperture facilities. We have conducted some preliminary analyses of expected planet-forming signatures (see Figure 1). The results allow us to estimate that such an array would require 20–30 telescopes spread over 7km to achieve high-fidelity images at the desired sensitivity.

As part of our concept studies we are considering both space-based and ground-based options for the PFI project. The space-based option would offer the advantage of sensitivity to a wide range of wavelengths, and would permit diverse and robust extragalactic science goals in addition to the planet formation program. Although small-scale multi-spacecraft formation flying has recently been demonstrated (e.g., the Syncronized Position Hold, Engage, Reorient Experimental Satellites on the International Space Station), kilometer-scale equivalents remain untested. Free-flying external occulters are currently being studied by NASA and ESA (European Space Agency), and they may be applicable for our PFI project. For the ground-based alternative we are investigating a ‘conventional’ direct detection system. Light is collected by several 2–4m telescopes (all fitted with adaptive optics) and transported to a central beam combination facility through a series of vacuum pipes, which allows the introduction of additional turbulence and light dispersion to be avoided. This design for PFI would represent a larger-scale version of the Center for High Angular Resolution Astronomy array4 or the European Southern Observatory's Very Large Telescope Interferometer.5 Unfortunately, the technology for this approach is prohibitively expensive at present. In our PFI technology roadmap, therefore, we are attempting to reduce the cost and risk by investigating new fabrication methods for diffraction-limited 2–4m telescopes by leveraging advanced lightweight mirrors and adaptive optics. We will also require more than six beam combinations, which has never previously been attempted, at visible and IR wavelengths. Major improvements in mid-IR photonics and integrated optics are thus needed to achieve this architecture.

Within the PFI project we are also exploring novel possibilities that are enabled by recent technology advances in laser frequency combs and single-mode fiber beam transport. These developments would allow us to build PFI as an array without vacuum pipes, but with near-IR fringe (via fiber) tracking and mid-IR heterodyne detection instead. With this design, the signal is converted to an electronically tractable frequency range, and then amplified and combined in a computer correlator. This would enable the efficient combination of a large number of apertures and would permit observations in gas-tracing lines at extremely high spectral dispersion.6 More laboratory investigations, however, are required to explore this innovative concept in detail.

The PFI project would be a mid-IR telescope, with high angular resolution, which would facilitate a new generation of observations for the study of planet formation processes around nearby stars. At this stage of the project we hope to identify and specify compelling science goals to guide the technological requirements and design. We already have 100 scientists who have volunteered to help define the PFI mission, and we have recently formed Science and Technical Working Groups. We expect to hold a PFI workshop in 2015, followed by publication of a science white book with detailed baseline system architectures. PFI is a long-term prospect that requires coherent efforts to be sustained over several years, and possibly decades. We welcome and encourage new participation in our working groups.3

John Monnier is a professor of astronomy at the University of Michigan where he builds innovative astronomical instrumentation for high angular resolution imaging. He is interested in imaging the surfaces of stars and the complex environments around stars. He is currently the project director for PFI.

Stefan Kraus is a Science and Technology Facilities Council Rutherford Fellow and Proleptic Lecturer. He uses interferometry at various wavelengths to investigate the processes involved in star and planet formation. He is the project scientist for the PFI project and acts as president of the European Interferometry Initiative Science Council, which represents and coordinates the optical interferometry community on a European level.