Solar-driven water splitting to produce H2 and O2 has potential as a clean energy solution and has attracted a significant amount of attention.1–4 Since the first demonstration of photoelectrochemical water splitting over titanium dioxide (TiO2) in 1972,5 different kinds of semiconductors have been developed and evaluated as candidate photoelectrodes for solar-driven hydrogen conversion.6–9 Zinc oxide (ZnO) has excellent properties such as low cost, nontoxicity, thermal stability, and superior electron mobility. Consequently, it has been intensively investigated as a photoanode for solar water splitting. However, it has the major drawback of a large bandgap of ∼3.26eV—photons with energy matching the bandgap will be absorbed—which makes ZnO inert in visible light (<3.1eV) and limits its application for solar water splitting. We have therefore worked to extend the optical absorption of ZnO to visible light and even the near-IR region by reducing its bandgap.

Impurity doping in the bulk of a photoactive metal oxide (such as ZnO) has been known to shift optical absorption to the visible region.1, 4 However, the activity in visible light of such doped metal oxides is always relatively low, mainly because the foreign dopants introduce intra-bandgap energy levels that act as recombination centers for photoinduced charge carriers.1 Knowing this effect of intra-bandgap impurities on metal oxide charge transport properties, Mao and coworkers introduced novel nanostructured arrays that decouple optical absorption and electron transport by spatially separating the associated impurity distributions.10 In this unique zinc oxide:aluminum/zinc oxide:nickel (ZnO:Al/ZnO:Ni) core/shell nanorod structure, ZnO nanorods are doped in two different ways: in core regions with shallow aluminum (Al) donor levels for enhanced electronic conduction, and in the near-surface volume with intragap nickel (Ni) impurity states for increased optical absorption. They tailored the dopant profiles within the structures to maximize both the spectral overlap of optical absorption with the terrestrial solar flux and quantity of photogenerated minority carriers reaching the oxide-water interface.10As a result, they achieved an approximately threefold enhancement in conversion efficiencies for solar-abundant visible wavelengths. 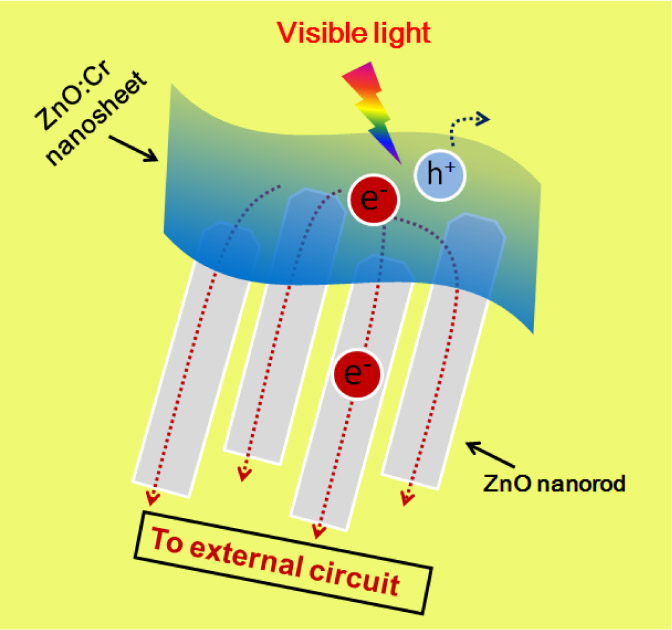 Ion implantation is an effective means of ion doping that involves injecting the doped ions into the bulk of the substrate. Recently, we used an advanced ion implantation method to dope copper ions (Cu+ and a small amount of Cu2+) into ZnO nanorod arrays for photoelectrochemical water splitting in visible light.12The bandgap of ZnO was markedly reduced by the impurity levels introduced by copper ion doping in the forbidden gap, and the copper-doped ZnO nanorod arrays displayed extended optical absorption. Under visible light (λ > 420nm), a considerable photocurrent density of 18μA/cm2 at 0.8V versus SCE (saturated calomel electrode) was achieved, which is about 11 times higher than that of undoped ZnO nanorod arrays. X-ray photoelectron spectroscopy analysis revealed that Cu+ together with a small amount of Cu2+ ions were highly dispersed with a gradient distribution within the ZnO nanorod arrays. Despite the disadvantage of intra-bandgap impurities contributing to relatively low photoactivity, this study showed that ion implantation is a feasible approach for developing novel visible-light-active photoelectrodes.

We have used this method to dope nitrogen (N3−) ions (using nitrogen gas as the resource, which is ionized and accelerated into the ZnO), into ZnO nanorod arrays to activate ZnO in visible light for photoelectrochemical water splitting. Unlike copper ion dopants, nitrogen ion dopants are less likely to form intra-bandgap levels in the forbidden band but instead shift the valence band edge upward.1 This narrows the band gap of ZnO and also lowers the Fermi level (the energy level with a 50% probability of being occupied at thermodynamic equilibrium) of ZnO due to the p-type nature of the nitrogen ion dopants. In our ZnO nanorods implanted with nitrogen ions, the gradient distribution of dopants induces alignment of Fermi levels to give a nitrogen-doped ZnO homojunction with a terraced band energy structure, which induces a built-in electric field to promote charge transfer (see Figure 2). Under visible light, the gradiently nitrogen-doped ZnO nanorod arrays absorb photons to produce electron-hole pairs. Driven by the built-in electric field, the electrons and holes can be efficiently transferred to the conductive substrate and the nanorod surface through the terraced band structure, respectively, to reduce and oxidize water to H2 and O2. As a result, the nitrogen-doped ZnO nanorod photoanode displayed markedly enhanced photoelectrochemical performance for water splitting. It achieved a photocurrent density of ∼160μA/cm2 at 1.1V versus SCE under visible light illumination, which was about two orders of magnitude higher than that of the bare ZnO nanorod arrays. 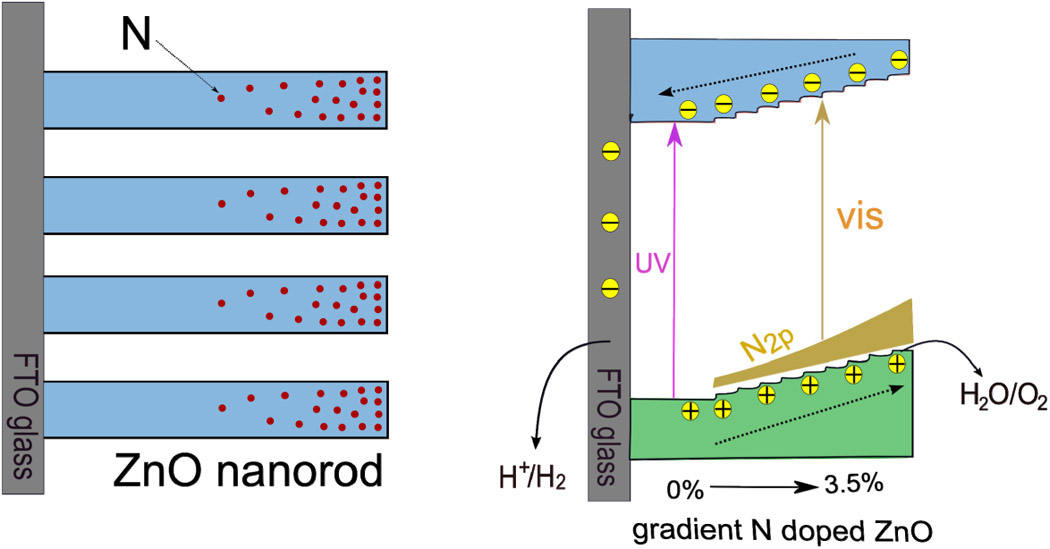 In summary, we have engineered the distribution of impurities in ZnO nanostructured arrays for photoelectrochemical water splitting. The spatially inhomogeneous doped nanostructures not only show optical absorption extended to the visible light region but also favor charge carrier transfer and/or separation, leading to considerable photoelectrochemical activity for water splitting under visible light. We have also adapted this concept of impurity distribution engineering to some other metal oxide photoelectrodes, including TiO2 and hematite (α-Fe2O3).13–15 We are now conducting more detailed studies on these systems.

Shaohua Shen is currently an associate professor at Xi'an Jiaotong University, China. During 2008–2009 and 2011–2012, he worked as a guest researcher at the Lawrence Berkeley National Laboratory, CA, and as a postdoctoral researcher at the University of California at Berkeley, respectively. His research interests include photocatalytic and photoelectrochemical solar energy conversion.