Electrons in molecules rearrange on an attosecond timescale, much faster than the nuclear rearrangement associated with chemical bond breaking, which takes tens to hundreds of femtoseconds. In spite of these dramatically different timescales, it has been shown that the electron dynamics can influence the ensuing nuclear motion.1 Capturing, and ultimately controlling, this electronic motion may therefore open up the possibility of dictating the outcome of a chemical reaction before the nuclei even begin to move,2 by shaping the spectral amplitude and phase of the attosecond pulse to select a particular reaction pathway.

Despite widespread interest, application of attosecond science to molecular targets has proceeded slowly. For pump-probe experiments, it would be ideal to generate intense isolated attosecond ‘pump’ pulses3 from below-threshold harmonics (i.e., with photon energies below the ionization threshold of the generation medium, which can excite ground state electrons to a higher molecular orbital). Such harmonics lie in the relatively low-photon-energy vacuum-UV (VUV) spectral region, where molecules are most electronically active. However, it is difficult to generate below-threshold harmonics, and until now the low conversion efficiency of attosecond pulse generation has severely limited the achievable photon flux (number of photons).

Macroscopic buildup of high-order harmonics can be enhanced through phase-matching techniques. In these, the interaction between a driving laser and the medium in which the high-order harmonics are to be generated is experimentally tuned to maintain a fixed phase relationship between the driving laser and the generated harmonic fields. Phase matching techniques have been used effectively in high-order harmonic generation in the above-threshold region to scale the achievable photon flux, primarily in the extreme-UV and soft x-ray spectral regions.4 We have demonstrated a new mechanism for phase matching of below-threshold harmonic generation.5 The technique relies on the spectral phase shifts in the vicinity of an atomic resonance and enhances generation of below-threshold harmonics by nearly five orders of magnitude.

In our experiments, we generated below-threshold harmonics in a low-density (pressure-length product P×L=10 torr-mm) argon-filled gas target.5 The few-cycle driving laser had a pulse duration of 5fs, a central wavelength of 730nm, and was focused to an intensity of approximately 3×1013W/cm2. We detected the VUV spectrum, as well as the spatial divergence of the different spectral components, using a flat-field VUV spectrometer. Figure 1 shows the angularly resolved spectrum in the vicinity of the 9th and 11thharmonics of the driving laser. The 9th harmonic lies below the ionization threshold of argon (which is 15.76eV) and exhibits enhanced narrow line structures in the vicinity of the atomic resonances of argon: see Figure 1. (The 11th harmonic lies, of course, above the ionization threshold.) Unlike incoherent plasma line emission, the observed resonance-enhanced structures (RESs) are emitted in a laser-like beam with divergence angle equal to that of the above-threshold harmonics. 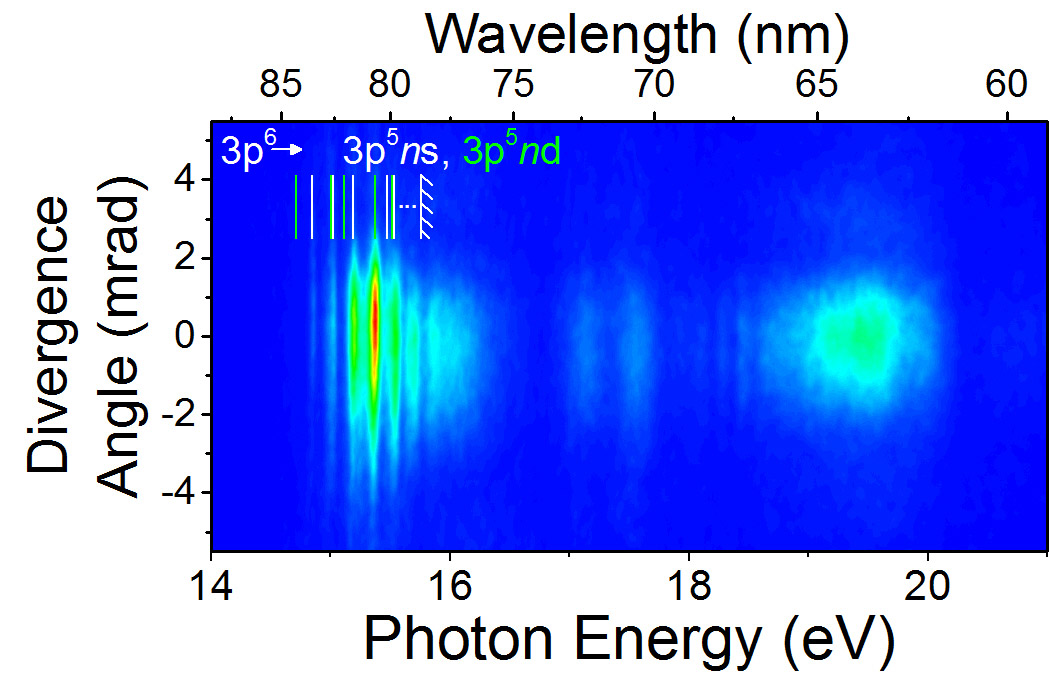 Figure 1. (a) Spectrally and angularly resolved resolution-enhanced structure (RES) generation. The atomic resonances in the vicinity of the 9th harmonic (3p6→3p5ns and 3p5nd, 15–16eV) are indicated. The 11thharmonic (H11, 19–20eV) is comparatively featureless.

The RESs can be further enhanced by increasing the density of the target gas. Figure 2 shows the dependence of both the RESs and the above-threshold 11th harmonic on the argon target pressure-length product. While the 11th harmonic saturates for P×L>20 torr-mm, the RES intensity increases quadratically, indicating a phase-matched generation process. The pulse energy contained in the RES spectral region was calibrated using a photodiode, and can reach more than 1 microjoule, nearly 1% of the driving laser pulse energy. 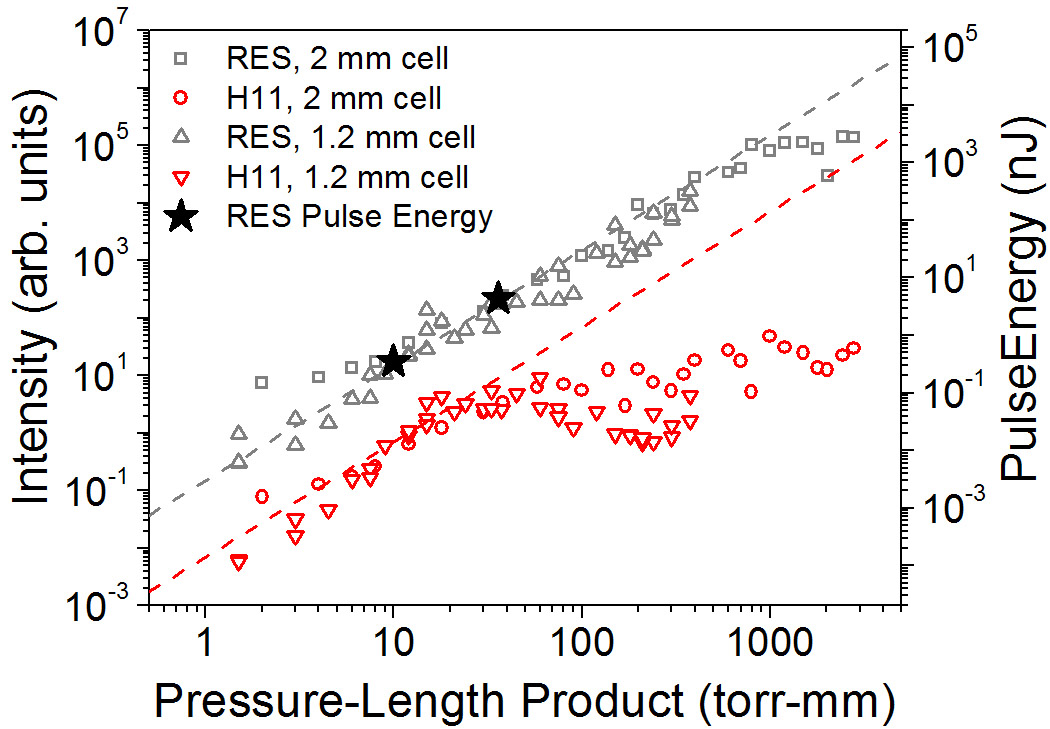 The phase matching of the RES generation is observed to occur at much larger target densities compared with above-threshold harmonic generation. In the vicinity of the atomic resonance, and for the relatively low driving laser intensities used in the experiments, the phase difference between the generated VUV light and the laser-induced polarization arises primarily from the phase accumulated during propagation in the neutral atomic medium and the Gouy phase (a shift in phase associated with focusing of Gaussian beams). For photon energies just above the atomic resonance, the atomic phase is negative and can compensate the positive Gouy phase. The atomic phase is proportional to the gas density, and thus different photon energies can be phase matched at different pressures, allowing quadratic growth of the intensity.

In summary, phase matching of below-threshold harmonics promises to allow the generation of intense VUV attosecond pulses, which can be applied as ‘pump’ pulses for the study and control of electron dynamics in molecular targets. While the narrow linewidths of the RESs precluded the observation of isolated attosecond pulses in this preliminary study, using pressure gradients or mixed gases promises to enable phase matching over the entirety of the below-threshold spectral region, which we are now working to achieve.

Michael Chini is a research scientist in the Laser Plasma Laboratory at the Townes Laser Institute, UCF. He completed his PhD in physics at UCF in 2012, on characterization and application of isolated attosecond pulses. His research interests include the development and application of novel laser sources for attosecond science.

Zenghu Chang is a distinguished professor at UCF and director of the Institute for the Frontier of Attosecond Science and Technology. He is the author of Fundamentals of Attosecond Optics. His notable contributions include development of double optical gating for generating attosecond pulses.