The invention of the laser in the 1960s revolutionized optics and photonics. But the healthcare field received the new invention with some trepidation as it belonged to the same spectrum of electromagnetic radiation as ionizing UV and gamma radiation. Early dose escalation studies clearly demonstrated the utility of high-power lasers as precise surgical tools capable of destroying tissues. Surprisingly, however, lower doses were noted to produce a ‘stimulatory’ response, promoting hair growth and wound healing.1 Since then, many clinical and lab studies have used this treatment, termed low-level light therapy or more appropriately photobiomodulation, to reduce pain, inflammation, promote or suppress immune response, and promote healing and tissue regeneration.

While there is significant anecdotal evidence of its clinical benefits, this treatment has been blemished with reports of inefficacy and subtlety. Too high a dose was detrimental while too low a dose did nothing, suggesting there is an intermediate, optimal dose for the greatest benefit. Most research has focused on identifying the optimal dose, and yet the complex laser-tissue interaction is still poorly understood.

We set out to assess the ability of low-power lasers to stimulate dental stem cells to develop into distinct types of cells. We also wanted to decipher the molecular mechanisms involved.2 We chose dental stem cells because there are abundant accessible adult stem cells within tooth pulp. A tooth is made up of the calcified tissues dentine, enamel, and cementum. The tooth is principally dentine, covered by enamel above the gum and cementum below. Pulp is a soft tissue found at the core of the tooth inside the dentine that harbors the adult dental stem cells (see Figure 1 for the structure of a tooth). 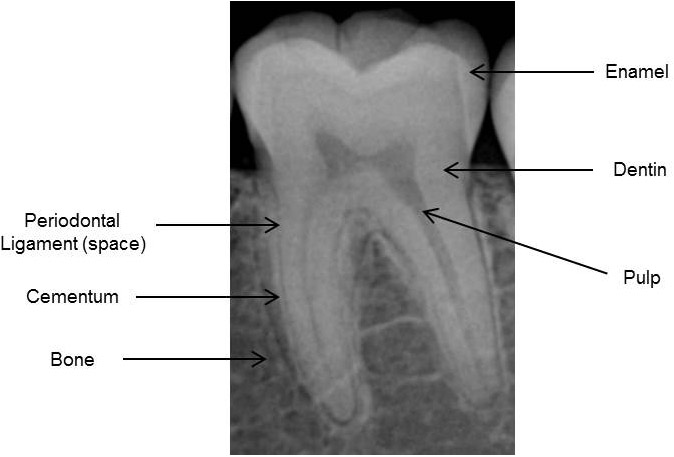 Figure 1. The structure of a tooth. Dental stem cells are found within the pulp.

For proof of the principle, we drilled two upper teeth, exposing the pulp, in each of seven anesthetized rats. We illuminated the exposed pulp of one tooth from each rat with an 810nm diode near-IR laser at low doses (3J/cm2), and left one tooth untreated as a control. Both teeth were restored with a cement filling and observed over time. We found a notable increase in mineralized tissue in the laser-treated teeth compared to the controls. Dental stem cells are able to develop into various mineralized tissues such as bone, cementum, and dentin.3 We carefully examined the newly formed mineralized tissue and found that it was a form of reparative dentin called tertiary or osteodentin. However, this haphazardly deposited tertiary dentin lacked the well-organized, tubular architecture of normal dentin, and this is a shortcoming of the laser treatment technique.

We next explored the mechanism by which laser treatment directs dental stem cells to form dentin. We noted that the primary biochemical event once the light energy interacts with biological tissues is the generation of reactive oxygen species (ROS). These short-lived, extremely reactive chemical intermediates have multiple biological targets, and their quantities and individual species are well known to elicit distinct biological responses. Following laser treatment, the generated ROS appear to be sensed by a specific methionine residue on a latent (i.e., not physiologically active) complex of a growth factor known as transforming growth factor-β1 (TGF-β1). This specific oxidation event changes the conformation of the latent complex that activates it, allowing ligand-receptor binding and subsequent biological responses. TGF-βs are key biological mediators in a wide range of routine physiological and pathological scenarios. Interestingly, TGF-β1 has a key role in dentin biology.4 Hence, the ability to activate endogenous, latent TGF-β1 with laser treatment provides a unique, non-invasive tool that can be rapidly translated to clinical practice. We also performed experiments to successfully confirm the linear causal relationship between laser-generated ROS-activated latent TGF-β1. With ROS (hydrogen peroxide) and TGF-β1 after laser treatment, the dental stem cells developed into dentin. When these were inhibited or absent, no dentin developed.

In summary, this work demonstrates one mechanism of laser therapy with dental stem cells involving ROS generation and TGF-β1 activation (see Figure 2). Exposing pulp to laser light induced dental stem cells to develop tertiary dentine, although it should be noted that this dentine lacked the usual well-organized architecture of normal dentine. Both ROS and TGF-β1 molecules are known to have central, multifaceted biological roles in a range of pathophysiological processes and show dose-dependent responses (as is also observed with laser therapy). A non-invasive, individually tailored device is extremely attractive as a tool to promote tissue healing and regeneration. Such a device might reach clinical practice more rapidly than biological or pharmaceutical agents. It would benefit from lower regulatory barriers, more robust quality control and assurance, ease of storage and delivery, and as a reusable device would be more cost-effective. We now intend to study the use of lasers to stimulate stem cell specialization into a range of other cells, including muscle (myogenesis), neurons (neurogenesis), bone (osteogenesis), fat (adipogenesis), and blood vessels (angiogenesis). 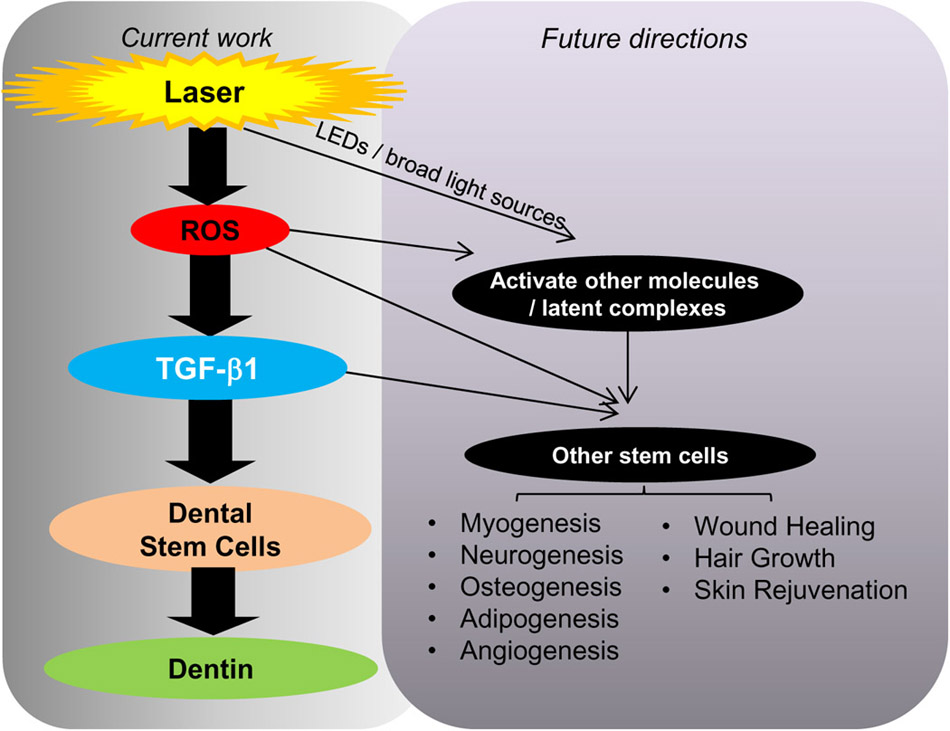 David Mooney is the Robert P. Pinkas Family Professor of Bioengineering at SEAS. He plays an active role in the major biomedical and chemical engineering professional societies and participates on several industry advisory boards.

Praveen Arany is currently chief of the CRCU. His research focus is the molecular mechanisms and clinical applications of laser therapy. He is the incoming president (2014–2016) of the North American Society of Light Therapy and co-chair of the SPIE BiOS conference on mechanisms for low-light therapy.