Prospects for a space-based gravitational-wave observatory

The technology for a million-kilometer-scale interferometer to study gravitational waves will soon be in place, for a launch within 10 years.
22 August 2014
Guido Mueller

General relativity can be summarized by John Wheeler's now-famous dictum: “Spacetime tells matter how to move, matter tells spacetime how to curve.”1 Within this framework, gravitational waves (GWs) are the messengers that tell distant observers about changes in local mass distributions. They will soon be discovered by ground-based observatories such as Advanced LIGO2 (Laser Interferometer Gravitational-wave Observatory) and Advanced Virgo3 in the 10Hz to 10kHz frequency range, and by pulsar timing arrays4 in the nHz to μHz range. However, the signal-rich mHz range can only be explored by proposed space-based GW observatories (SGOs) like the well-studied Laser Interferometer Space Antenna (LISA). LISA was a highly ranked joint NASA/ESA (European Space Agency) mission that was cancelled in 2011 due to budgetary constraints. Since then, eLISA5 in Europe and SGO-Mid6 in the US have replaced LISA as notional mission designs for future SGOs. These LISA-like missions would trace the history of massive black holes out to large redshifts (>20), take a census of compact galactic binaries, and probe general relativity in the ultra-relativistic regime (see Figure 1).7

The basic principle for measuring GWs dates back to Felix Pirani, who proved that GWs change distances between freely falling test masses (TMs).8 This simple idea is the foundation of all modern interferometric GW detectors. The amplitude, h, of a typical GW from a binary system can be estimated from the four length scales involved: the Schwarzschild radii (R1 and R2) of the two orbiting objects, the distance D between the objects, and the distance r to the observer, yielding h=R1R2/Dr. Expected strain amplitudes range from 10−14 in the nHz range to 10−23 in the kHz range.

A LISA-like mission would place three spacecraft in a triangular constellation into a heliocentric orbit (see Figure 1). Free-falling TMs inside each spacecraft would define the endpoints of the interferometer arms, which would each be a few gigameters long. Some of the weakest gravitational waves visible for LISA-like missions will be from 104-solar-mass black-hole mergers near the edge of the visible universe and extreme-mass-ratio inspirals (where a solar-mass black hole falls into a much larger black hole) at redshifts of order unity. These sources will change the distances between the TMs by less than a picometer with periods of several hundred seconds. The strongest expected signals will be generated by 107–108-solar-mass black-hole mergers at redshifts of unity, which will change the distances by up to several tens of nanometers. LISA could have traced such binaries for up to a year prior to their merger.

The creation of free fall is the most challenging technology required for LISA-like missions. Each TM acts as a gravitational reference sensor (GRS) and has to be isolated from all non-gravitational forces at the

level. ESA decided to test this technology in the LISA Pathfinder (LPF) mission, which is scheduled to be launched in the summer of 2015.9 LPF shrinks the distance between two TMs from a few Gm to 40cm and measures their differential acceleration. Each TM is a 2kg gold-platinum cube that freely moves inside a housing. Differential capacitive sensing and laser interferometry are used to measure the displacement of each TM and to center it inside its housing either by steering the spacecraft around the TM (drag-free mode) or by applying electrostatic forces to the TM (acceleration mode). NASA is participating in LPF with micronewton thrusters, an integrated avionics unit, and flight software. Both eLISA and SGO-Mid plan to use the LPF-tested GRS.

The interferometric measurement of the relative motion of the Gm-separated TMs is usually split into three parts: a local measurement of each TM motion with respect to a fiducial inside the spacecraft, a measurement of the relative motion of this fiducial relative to the corresponding fiducial on the other spacecraft, and another local measurement on the far spacecraft (see Figures 2 and 3). The proper linear combination of these signals cancels the residual spacecraft motion and allows extraction of the differential TM motion measured in fractions of the laser wavelength. A linear combination of time-shifted laser phase measurements from both arms allows creation of an artificial equal-arm Michelson interferometer signal that is independent of laser wavelength fluctuations and is sensitive only to differential length changes. Early on in LISA planning, achieving this time-delay interferometry was considered to be a major ‘technology risk.’ It has since been studied, first theoretically and later experimentally with ever-increasing time delays and complexity, and it is now well understood and retired as a risk.10–13 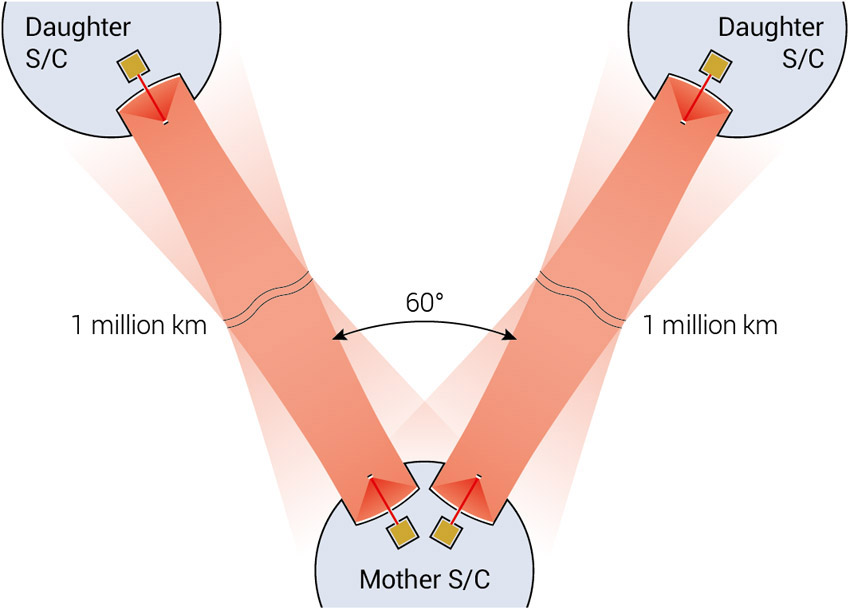 Figure 2. A conceptual layout of the two-arm configuration with a central mother spacecraft (S/C) and two daughter spacecraft, as envisaged for the eLISA mission. The mother carries two identical payloads and each of the daughters one. The SGO-Mid mission would use three identical mother spacecraft to form a three-arm interferometer. (Image credit: Albert Einstein Institute Hannover/Simon Barke.5) 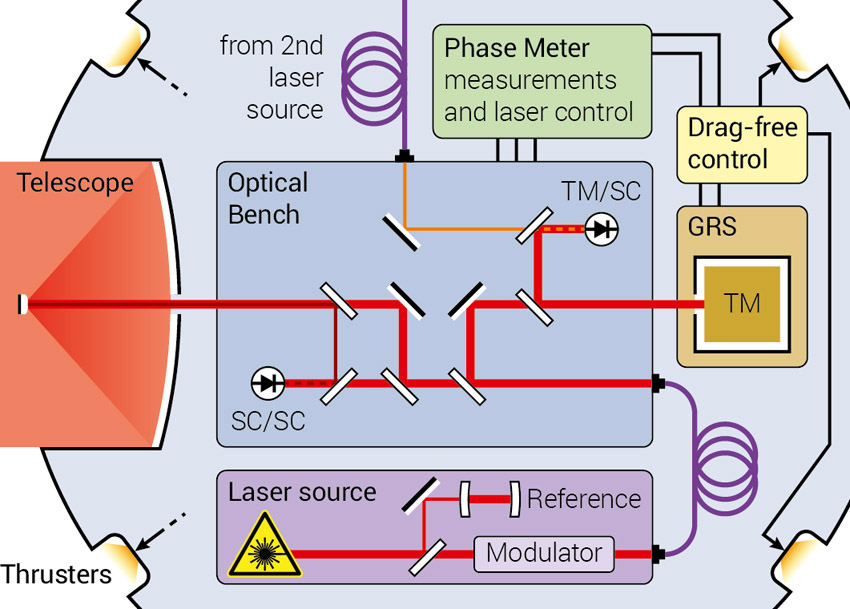 Figure 3. A conceptual layout of the eLISA payload. The test mass (TM) inside the gravitational reference sensor (GRS) is the endpoint of the interferometer arm. The optical bench acts as the fiducial for both the local and the long-arm interferometer. Also shown are the laser bench with the reference cavity for frequency stabilization; the telescope, which sends and receives the laser beams; and the phase meter, which measures the phase evolution of multiple laser beat signals. SC: Spacecraft. (Image credit: Albert Einstein Institute Hannover/Simon Barke.5)

These breakthroughs in interferometry and the demonstration of free fall with LPF will retire many of the real and perceived risks of LISA-like missions. Additional investigations have led to significant progress for many other critical items, such as backscatter from the LISA telescope, the backlink fiber, and the optical bench.14–16 An independent NASA study found only one medium-risk item for LISA, the lifetime of the μN thrusters, which is being addressed in an ongoing study.6 Following a successful LPF, the technology for a LISA-like mission will soon be available, and eLISA or SGO-Mid could easily launch 10 years from now, should funding be available.

ESA has selected the ‘gravitational universe’ science theme5 for its L3 mission, the third large-class mission in its Cosmic Vision science program. This choice is encouraging, although the official launch year of 2034 is 10 years after what would generally be considered a timely follow-up of LPF, a several-hundred-million-dollar (or euro) technology demonstrator. However, a detection of GWs by Advanced LIGO, Advanced Virgo, or the pulsar timing arrays will further increase the already overwhelming scientific interest in LISA-like missions. Such detection, along with the technical readiness and maturity following a successful LPF, should improve our chances for an earlier launch in the second half of the 2020s.

The author gratefully acknowledges support from NASA under grant NNX12AE97G.

Guido Mueller received his PhD in 1997 from the University of Hannover. After a year in Japan, he moved to the University of Florida in 1998 where he works on Advanced LIGO and LISA. He chairs the Gravitational Wave Science Interest Group within NASA's Physics of the Cosmos program.