Lidar (light detection and ranging) remote sensing techniques use lasers to measure distance to an illuminated target. Lidar instruments have several mapping applications and are used in a variety of atmospheric studies. These include aerosol profiling, micrometeorology of the planetary boundary layer (PBL), cirrus cloud characterization, validation of satellite observations, as well as measuring the vertical distribution of water vapor and its interaction with aerosols. The metropolitan area of São Paulo (MSP) is one of the largest megacities in the world and faces many problems related to air quality. Lidar measurements can therefore be used to monitor the high concentrations of aerosols in this region and to study the role of local and long-range aerosol sources. 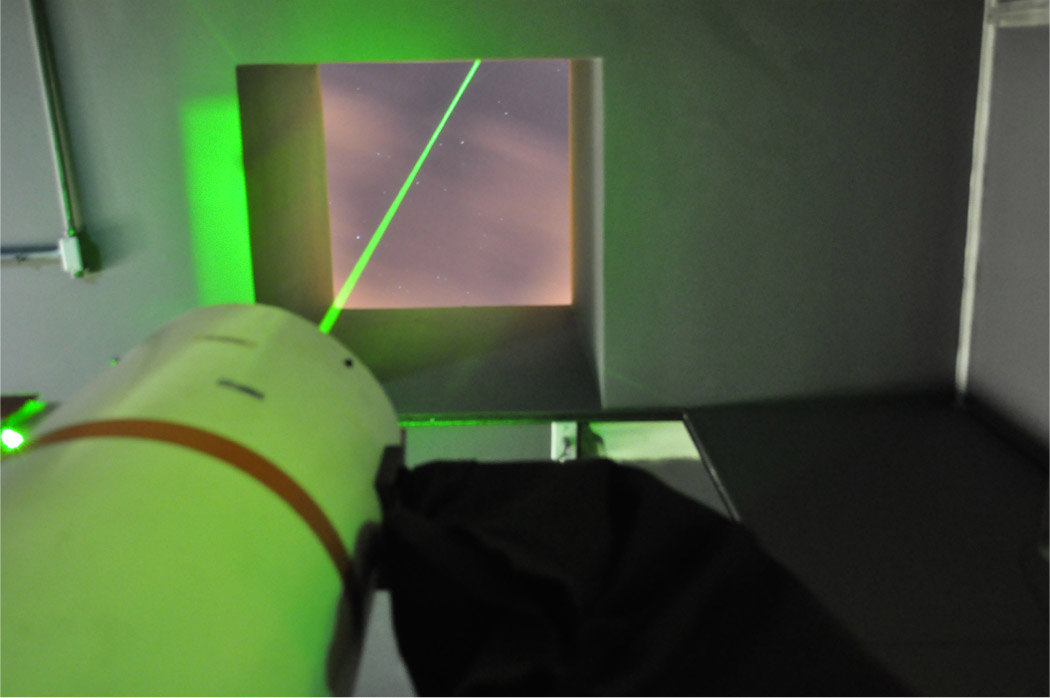 The first studies we conducted at the São Paulo lidar station focused on the correlation between aerosol optical properties and particulate matter concentration.1 We developed a single-wavelength lidar system—in collaboration with the National Technical University of Athens—for these studies. Our measurements were used to study the PBL height, the dispersion of pollutants, and turbulence caused by the high temporal and spatial resolution of the system. With range corrected, aerosol extinction, and/or backscattering coefficients, it is possible to identify the morphological features of the atmosphere and to study its important structural layers and their temporal evolution (see Figure 2).2 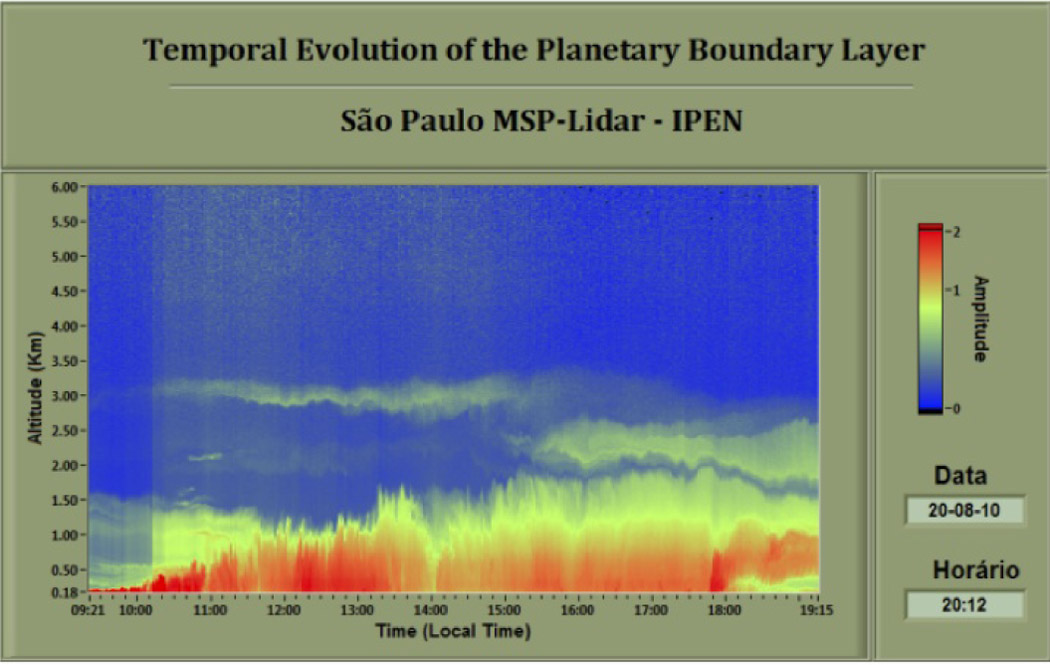 Figure 2. Range-corrected backscattered lidar signals (RCSs) measured with the São Paulo metropolitan area (MSP) lidar system at IPEN on 20 August 2010. The RCSs were obtained directly from the light signal detected by the sensor by multiplying by the square of the distance after background subtraction. The atmospheric dynamics below the planetary boundary layer can be seen in this image, as well as other plume layers that were generated locally and/or transported from neighboring regions.

Since 2004 we have used the MSP-lidar system to make powerful measurements of high and optically thin cirrus clouds in real time. We have developed algorithms and a parameterization methodology to study cirrus cloud climatology in the São Paulo region.3 From our measurements we derive accurate optical cirrus properties (i.e., lidar ratio and optical depth) and macrophysical properties of the clouds (i.e., the temperature and thickness of the clouds at their base and top). We have also developed a validation methodology to evaluate the accuracy of the modeled lidar ratio values that are used in the CALIPSO extinction algorithms and to assess the accuracy of CALIPSO aerosol product results.4 This work improves the CALIPSO validation studies that have so far been carried out in the southern hemisphere.

It is difficult to determine the real-time concentrations of combustion products through in situ sampling, and it is therefore challenging to make relevant measurements for characterization of atmospheric emissions from industrial flare stacks. We have thus acquired a customized commercially produced Raymetrics lidar system that incorporates a three-wavelength elastic backscatter system, and which operates in a biaxial mode. We have conducted some preliminary tests with this lidar system directed at a flare stack tip. The results indicate that it is possible to use such elastic-only multi-wavelength lidar measurements to study particle size distributions in flames.5

We have expanded our original single backscattering lidar system to have a six-wavelength configuration, which permits detection of aerosols and water vapor profiles. With this Raman lidar system, combined with radio sounding instruments, we can determine relative humidity levels. These measurements allow us to monitor the hygroscopic growth factor of aerosols in the MSP (see Figure 3).6 We have also recently developed a method to make in situ determinations of optical properties. This versatile technique involves a stable optical cavity filled with aerosol particles that is used to obtain measurements of the extinction of light that passes through. By altering the wavelength range of this cavity ring-down apparatus appropriately, our newest instrument can be used to make instantaneous characterizations of aerosols and their variability. 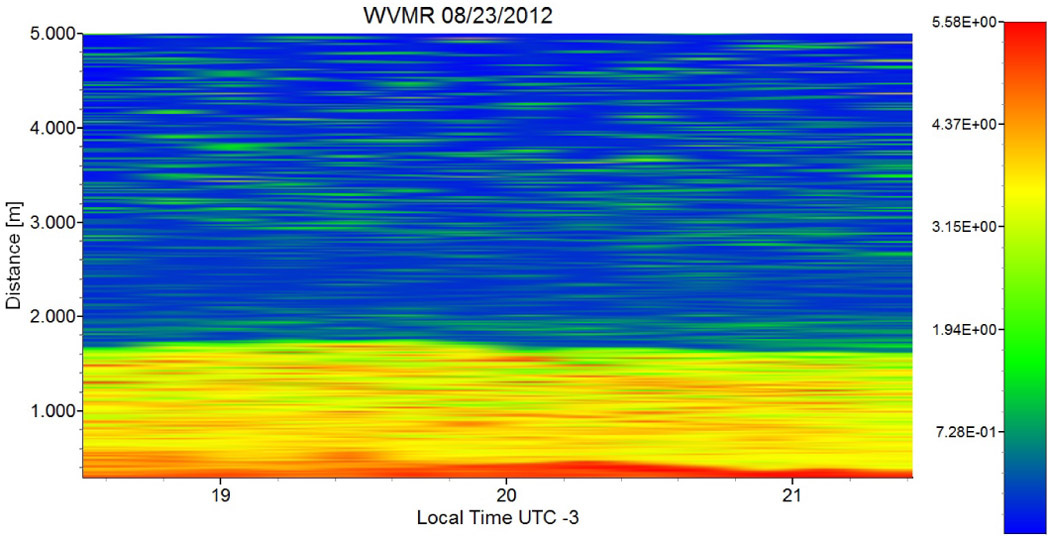 Figure 3. Water vapor mixing ratio (WVMR) calculated from MSP Raman-lidar observations (given in g/kg). The WVMR is calculated as the ratio of Raman scattering from water (H2O) and nitrogen (N2). This ratio is proportional to the relative concentration of H2O to N2, and after application of a calibration factor it provides a direct measurement of atmospheric water vapor content. The highest water vapor concentrations (as for aerosols) were observed from close to the ground up to about 2km. At higher altitudes there was an inversion and a sudden drop in humidity, which represents the local atmospheric conditions at the time of the observations. UTC: Coordinated universal time.

Our lidar instrumentation and measurements conducted in São Paulo have been part of a successful and ongoing atmospheric studies program for the past 15 years. In particular, we are concerned with aerosol concentrations in the city's metropolitan area and their environmental consequences. We are now developing applications for wind profiling in safe nuclear installations and for carbon sequestration gas leakage monitoring. Our activities also represent an opportunity for students to learn atmospheric physics and instrumentation skills.

The authors are grateful for the support and availability of research facilities of IPEN and Comissão Nacional de Energia Nuclear (CNEN) and to the Fundação de Amparo à Pesquisa do Estado de São Paulo (FAPESP), Conselho Nacional de Desenvolvimento Científico e Tecnológico (CNPq), Coordenação de Aperfeiçoamento de Pessoal de Nível Superior (CAPES), and PETROBRAS funding agencies. We express particular thanks to our collaborators Marcia T. Marques, Marcelo A. Osneide, and Felipe V. de Araujo at IPEN, as well as to other colleagues in Brazil and at institutions around the world.

Eduardo Landulfo has been the research director at IPEN since 1999. He obtained his BSc in physics from the University of São Paulo and his master's and PhD degrees in nuclear physics from IPEN. For the past 10 years his research has been focused on laser applications in atmospheric studies.