Aperture synthesis devices are commonly used in high-resolution astronomical imaging applications. At present, these instruments work efficiently in visible and near-IR (NIR) wavelengths. Such high-resolution imaging is now also expanding into mid- and far-IR domains, which are particularly relevant to the study of exoplanets. It is more difficult, however, to design these devices for use at the longer wavelengths because the required components (e.g., fibers, integrated optical components, and detectors) are not yet available or they currently have poor performance levels.

Aperture synthesis instruments are interferometers that combine signals from several telescopes. The resultant angular resolution of the images is the same as that of an instrument equal in size to the whole set of telescopes. The Astronomical Multi-Beam Combiner (AMBER)1 and the Michigan IR Combiner (MIRC)2 are examples of aperture synthesis devices that are currently in use as part of the European Southern Observatory and the Center for High Angular Resolution Astronomy (CHARA) at Georgia State University, respectively.

For more than ten years, we have been developing reliable aperture synthesis devices for mid-IR and far-IR wavelength ranges. In our novel approach, we implement a sum-frequency generation (SFG) process3 on each arm of a stellar interferometer. This shifts part of the long-wavelength spectrum of the astronomical source to visible wavelengths and simultaneously preserves the coherence properties of the spectrum (see Figure 1). After the light is collected by each telescope, the optical waves are therefore shifted to a spectral domain where an efficient optical chain of components (e.g., optical fibers, couplers, and detectors) can be used. 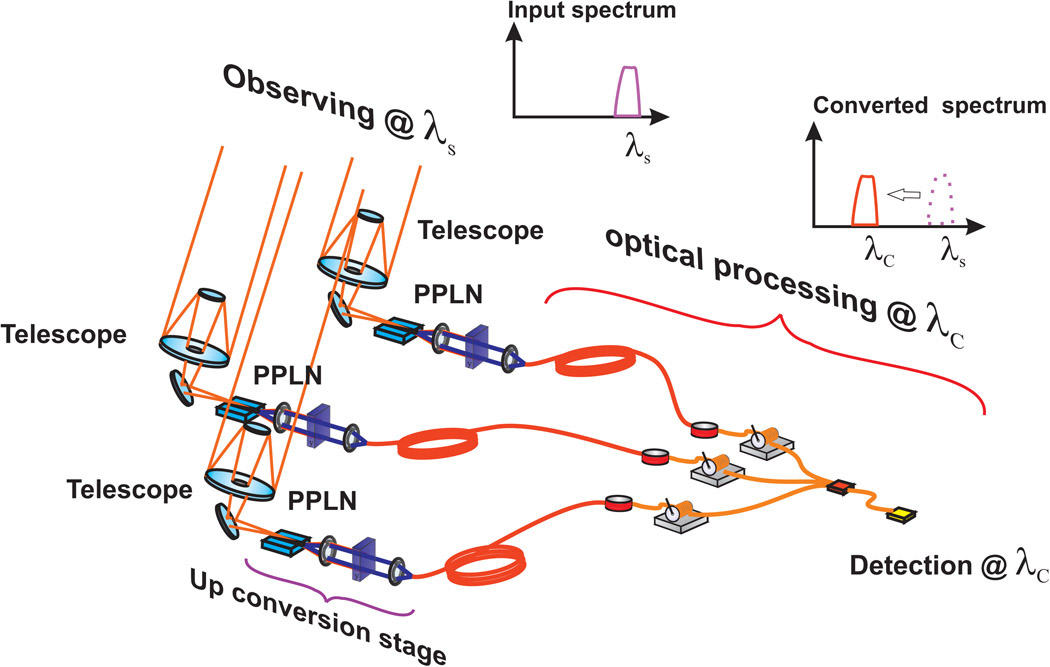 We have developed a laboratory up-conversion interferometer to conduct proof-of-concept experiments and to demonstrate the potential of our instrument design. Our laboratory interferometer includes nonlinear integrated optical periodically poled lithium niobate (PPLN) components that convert radiation at 1.55μm to 630nm, using energy that is supplied by a 1064nm laser pump source. With this experimental setup we have demonstrated the spatial coherence analysis of NIR laser sources.4,5 We have also demonstrated the up-conversion of starlight collected by an 8-inch telescope and processed through a single arm of the up-conversion interferometer.6 The sensitivity of our instrument for future on-sky demonstrations has thus been validated.

As a final test for our technique, we have recently conducted experiments with our up-conversion interferometer that illustrate the spatial coherence of a blackbody.7 It was our aim to show that SFG processes are well-suited to the analysis of incoherent light sources with less than one photon per spatiotemporal mode. The global scheme for the up-conversion interferometer we used for this experiment is shown in Figure 2. The input of this device is an original imaging stage that mimics a telescope array for the analysis of an astrophysical source. The PPLN crystals that are used to up-convert the IR radiation exhibit a narrow conversion-efficiency spectral bandwidth (0.3nm in our experiment), which leads to a converted signal with a higher coherence length than the incoming IR signal. Our novel configuration allows a high spectral resolution to be achieved. The constraint on the optical path equalization in the interferometer is also significantly reduced.

The results of our experimental spatial coherence analysis of a blackbody are compared with reference measurements that were obtained using a classical interferometer at IR wavelengths in Figure 3. There is a relative difference of less than 3% at half maximum between the two curves that fit our experimental data. This good agreement between the measurements illustrates that the spatial coherence of a blackbody source, with much less than one photon per spatiotemporal mode, can be investigated efficiently using an up-conversion interferometer. 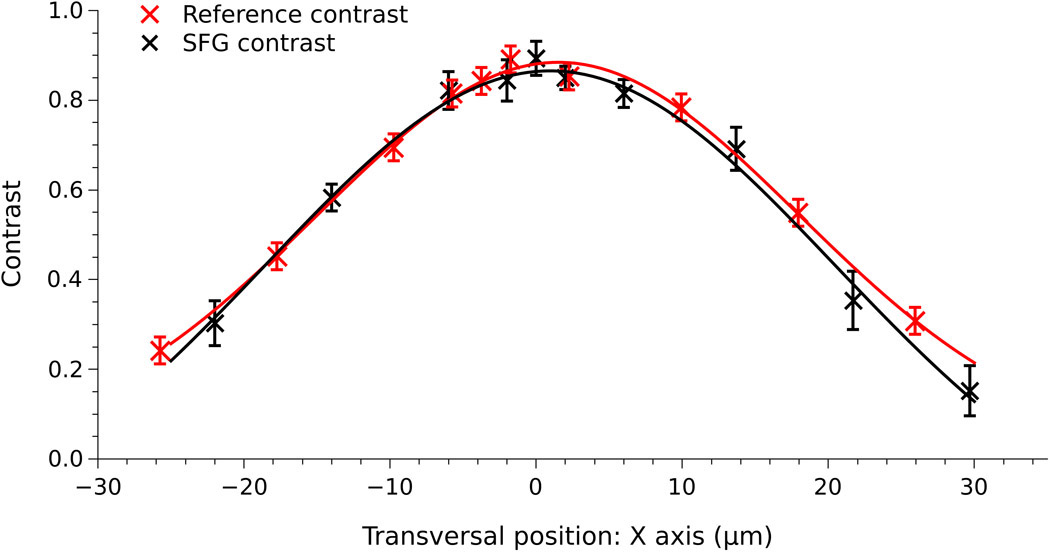 We have designed a new experimental setup that has been used to demonstrate the spatial coherence analysis of a blackbody using an up-conversion interferometer. Our results indicate that this kind of instrument is well-suited for use in studies of IR astronomical sources with aperture synthesis techniques. Our future work will focus on an on-sky proof-of-concept experiment. We will use an up-conversion interferometer coupled with the CHARA telescope array to achieve spatial coherence analysis of a real astrophysical object.

This work was supported financially by the Centre National d'Études Spatiales (CNES) and by the Institut National des Sciences de l'Univers (INSU).