In recent years, interest has grown rapidly in developing ultrafast laser sources with very high output power. Such sources are used in laser material processing such as micromachining or cutting carbon-fiber-reinforced plastic (CFRP). CFRP consists of a composite of plastics and fibers, which differ in their thermal properties, such as heat conductivity and sublimation temperature. Using a continuous wave laser source melts the material when cutting CFRP, resulting in a very large heat-affected zone that can make cutting impossible. Employing ultrashort laser pulses for cutting CFRP avoids this problem because instead of melting, the material evaporates in a 'cold' ablation process nearly instantaneously during the short pulse. Therefore, ultrafast laser sources with output powers in the kilowatt range would increase processing speeds and efficiency.

Much progress has been made in developing new high-power sources in the femtosecond and picosecond regimes, including thin-disk oscillators,1 amplifiers based on fibers2 or slabs,3 and regenerative amplifiers.4,5 Recently, colleagues and I developed a thin-disk multipass amplifier that delivers a record output power of 1.1kW at 7.3ps pulse duration and with multi-millijoule pulse energies.6 We have now further developed a generic multipass amplifier (see Figure 1). 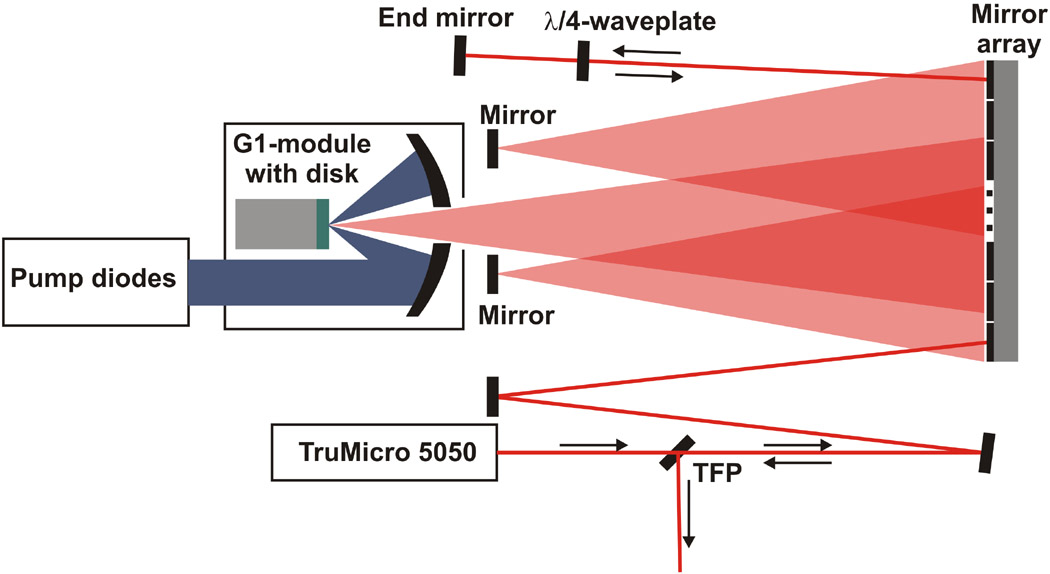 The main component in the multipass amplifier is a thin-disk crystal mounted on a diamond heat sink and placed in a pump cavity (named 'G1-module'). This cavity is used in the thin-disk concept to reflect the pump beam several times over the disk (green) so that all the pump light (blue) can be absorbed in the medium (see Figure 1). In this way, energy can be stored in the disk. This pump light is emitted by Trumpf laser diodes with a total power of 2.7kW. The wavelength used is 969nm (so-called ‘zero-phonon-line-pumping’). This is very beneficial for high-power applications because much less heat is generated in the disk in comparison to the usual pump wavelength of 940nm. The energy stored in the medium can now be used to amplify another laser beam, the ‘seed beam.’

The seed laser is a TruMicro 5050 (Trumpf Laser GmbH), which provides laser pulses lasting 6.5ps and with 115W output power at a repetition rate of 300kHz. An array of 40 mirrors (see Figure 2) is employed to reflect the seed pulses (red beam in Figure 1) several times over the pumped region of the disk. With each pass, the seed beam picks up a small portion of the energy stored in the disk and thus is amplified. After leaving the amplifier, a quarterwave plate and an end mirror reflect the seed beam back into the amplifier to double the number of passes. Finally, after 40 reflections on the disk, the beam is coupled out at a thin-film polarizer. The amplified beam has an output power of 1.4kW and a pulse energy of 4.7mJ (8ps pulse duration) at a wavelength of 1030nm. 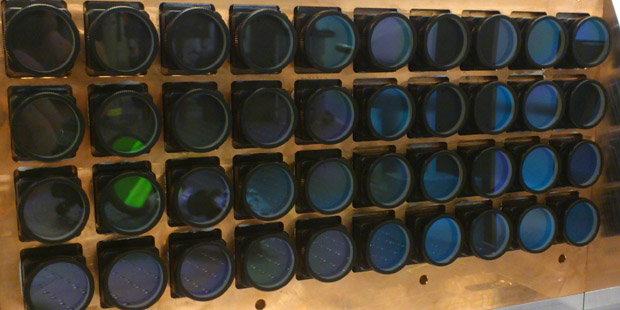 Figure 2. Array of 40 mirrors opposing the pumped thin-disk crystal to geometrically fold the seed beam over the disk for amplification.

We tested our laser system for cutting CFRP. It is the first time a kilowatt-class ultrafast laser had been used for this purpose. One of the main challenges was to reduce the heat accumulation arising from overlap between consecutive pulses and especially between consecutive passes over the same spot on the CFRP. We solved this by fitting the scanning speed to the desired pulse overlap and by increasing the length of the contour being cut out, which gave the material more time to cool between consecutive pulses. In the experiments, a maximum laser power of 1.1kW (limited by the scanning optics) was used at a pulse repetition rate of 300kHz leading to about 3.7mJ pulse energy. A rectangular-shaped (10 cm × 20 cm) CFRP plate 2mm thick was cut very cleanly and with unprecedented efficiency (see Figure 3). The effective processing speed was 0.9m/min. 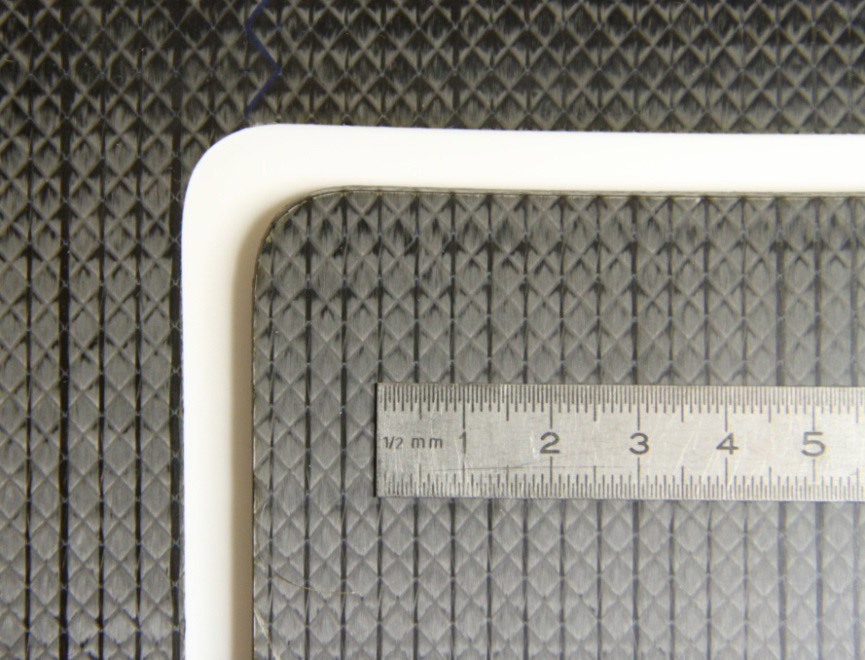 Figure 3. Picture of an edge of a rectangular piece of carbon-fiber-reinforced plastic (CFRP) cut with 8ps pulses at 1.1kW average output power and 3.7mJ pulse energy. The quality of the cut is excellent and was achieved at an unprecedented processing speed blue of 0.9m/min.

For micro-machining it can be very useful to employ high-power green laser light as some materials show higher absorption coefficients in this spectral region. Furthermore, these beams can be focused more tightly to drill very small holes.7 Recently, 445W of output power with sub-picosecond pulse duration has been demonstrated.8 We employed the new IR laser source in an experiment for second harmonic generation (SHG) in a lithium triborate (LBO) crystal 5mm long. Here, an input power of 1170W at 1030nm generated an output power of 820W at a wavelength of 515nm. This corresponds to 70% conversion efficiency and is the highest output power in the green spectral range for an ultrafast laser reported so far.

In conclusion, we demonstrated a novel picosecond laser source with 1.4kW average output power and high multi-millijoule pulse energy. We used the source to cut CFRP with a kilowatt-class ultrafast laser for the first time and with unprecedented efficiency. Furthermore, we achieved more than 800W in the green spectral range by SHG in an LBO crystal. Future work will focus on further increasing the output power in the IR and green spectral regions as well as frequency conversion to UV. We shall also explore the ability to shorten the pulse duration and experiment further using the system for material processing.

This work was funded by the German Federal Ministry of Education and Research (BMBF) as part of project T4nPV under contract 13N11787 and as part of project ProCaV under contract 13N11911. The system was developed at the IFSW in collaboration with Trumpf Laser GmbH. I would like to thank my colleagues and collaborators André Loescher, Christian Freitag, Margit Wiedenmann, Andreas Voss, Dominik Bauer, Dirk Sutter, Alexander Killi, Rudolf Weber, Marwan Abdou Ahmed, and Thomas Graf.