Organic polymers, commonly called plastics, are used extensively in everyday life, from windows to computer displays, and food packaging to lenses. Plastics are transparent, lightweight, and resilient. They are extremely versatile and can be molded, extruded, cast, and brushed. However, since their basic constituents are light elements such as carbon, hydrogen, and sometimes oxygen, plastics have low refractive indexes, potentially limiting their optical usefulness. Furthermore, they rarely present photoluminescence or optical absorption in the visible range. Previous efforts to synthesize organic polymers with desired optical properties (refractive index, transparency, color, and luminescence) have focused on changing their chemical structures. As an example, tuning the chemical structure of bulk heterojunction solar cells obtains the required broad absorption spectrum with a single donor polymer.1 However, this option is often financially prohibitive and suitable only for high-tech applications.

To obtain plastics with tailored optical properties, we can supplement common polymers with specific additives that tune the final optical properties of the material. One approach uses a specific industrial dye—typically a small organic molecule—that is soluble in the polymer and provides the desired color in the final material. However, it is essential that the dye does not aggregate or precipitate during production of the plastic, thereby degrading the optical appearance. As an alternative to organic molecules, we can homogeneously disperse in the polymer matrix complex nanostructures with specific optical or photonic properties, thus controlling their spatial distribution and enabling the design of new materials. We call these nanometric particles (NPs) in the polymer matrix ‘nanofillers’ and the materials produced 'polymeric nanocomposites.’2 Potential fillers include oxides, such as titanium dioxide (TiO2), metals (gold NPs), and semiconductors (quantum dots). Using this system, we can modulate properties such as refractive index, light absorption in a specific spectral region (UV, visible, or IR), or luminescence.3

Nanocomposite polymer matrices and nanofillers are typically characterized by different refractive index values, and therefore a relevant quantity of light can be scattered depending on the dimensions of the particles. This variation depending on the NP size is peculiar to nanocomposites, and is not necessarily detrimental; in fact, we can exploit it to obtain specific properties. Rayleigh's Law describes the scattering in our system. If the NPs present diameters of significantly less than 50nm (for spherical particles, 2r < λ/10, where r is the radius of the particles and λ the wavelength of the light) then negligible scattering of visible light occurs and the final materials are transparent in that region. Therefore, depending on the NPs' properties and concentration, we can tailor the materials to have a high refractive index, or UV or IR absorption.

However, even when we have NPs with the right dimensions, dispersing them in the polymer matrix presents a challenge. One approach is to arrange high-refractive-index NPs in transparent matrices, with the goal of increasing the polymer's dielectric constant (its potential for polarization). Equally important here is minimizing scattering, a requirement we meet by ensuring that the NPs are uniformly (or randomly) dispersed in the polymeric matrix. Methods developed in recent years have sought to reduce the particle-particle attraction that causes aggregation, the most promising of which appears to be modification of the surface by engineered ligands.4 Recently we showed that hydrophilic poly(2-ethyl-2-oxazoline) allows the preparation of highly transparent nanocomposites containing up to 44wt% of TiO2, in which the surface is partially covered by an organic molecule. Nanocomposite films remain highly transparent to visible light and absorb the UV radiation, and we can regulate their refractive indices in the range 1.52–1.65 as a function of TiO2 content.5

Another approach involves the solvothermal synthesis of titanium NPs using linear saturated aliphatic acids and amines. These are characterized by two different brush lengths (stretched polymers), instead of the traditional oleic acid and oleylamine, which not only have the same chain length but also present a double bond. We have exploited the potential of these NPs for the preparation of high-refractive-index polymer nanocomposites (see Figure 1). 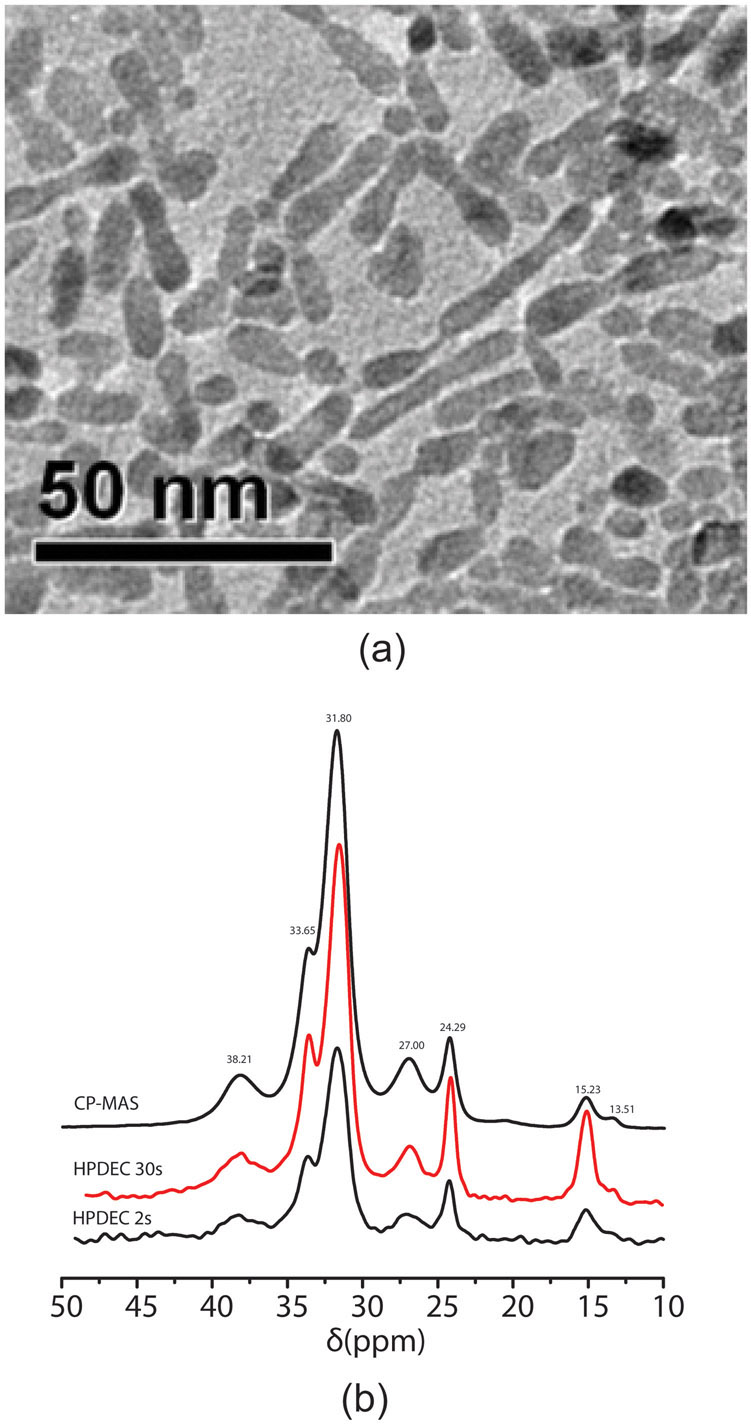 In many applications a controlled scattering of light can be beneficial. One example is an optical diffuser, a typical component of LEDs, where we need to spread the incident light over a wide angle to prevent glare. To achieve this, we modified the industrial method for synthesizing poly(methyl methacrylate) (PMMA), the 'cell-cast' method, for the fabrication of large-area nanocomposite plates (of up to 1–2m2 each) with tuned optical diffusion. We doped the PMMA matrix with commercial TiO2 NPs so that the final plates present the 'blue sky effect' typical of Rayleigh scattering (see Figure 2).6

Figure 2. A poly(methyl methacrylate) plate (25×27×0 .8cm) containing 0.1wt% surface-modified TiO2NPs viewed (a) under daylight and (b) with white light shone from the bottom edge. Orange light caused by Rayleigh scattering can be seen coming from the top edge.

Furthermore, we can apply ‘Stokes-shift-engineered’ cadmium selenide/cadmium(II) sulfide (CdSe/CdS) quantum dots (QDs) with giant shells in luminescent solar concentrators. This means that we modify the ratio of the core diameter of CdS to the thickness of the shell (zinc sulfide) such that the concentrators have the largest Stokes shift (the greatest difference between the absorption and emission bands). Such devices offer a cost-effective method of boosting the output of solar cells and enable integrated photovoltaics. In our approach, the solar concentrator is a PMMA panel containing the QDs that also guides light emitted from the colloidal crystal. Studies show that these concentrators yield optical efficiencies of >10% and an effective concentration factor of 4.4, demonstrating the significant promise of Stokes-shift-engineered QDs for large-area luminescent solar concentrators.7

Transparent polymer nanocomposites have many attractive and promising properties. However, there are still several important challenges to their application, the most relevant being the control of NP distribution at very high loadings (higher than 50wt%). In future work, we aim to address this issue by directly growing the polymer on the surface of the particles and then assembling the final object by thermo-mechanical methods.

Roberto Simonutti is an assistant professor of polymer chemistry. He holds a PhD in industrial chemistry from the University of Milan and was a postdoctoral researcher at the University of California, Berkeley. His research activity is focused on the synthesis of polymers and manufacture of polymer nanocomposites with adapted optical properties.

Annalisa Colombo is a postdoctoral researcher. She received a PhD in nanostructures and nanotechnologies from the University of Milan in 2012 with a thesis titled Synthesis and characterization of TiO2polymeric nanocomposites with tailorable optical properties.