Mitigating the impact of signal-dependent noise on hyperspectral target detection

Hyperspectral sensors (HSSs) collect data in hundreds of narrow contiguous spectral bands, providing a powerful means to discriminate different materials by their spectral features.1 In the last decade, several algorithms for object/target detection (TD) in hyperspectral images (HSIs) were proposed.1, 2 Most were derived assuming the spatial stationarity of the noise that affects HSIs, meaning the noise characteristics are assumed to be the same in each HSI region.

Recently, we and other researchers proved that assumption is not valid for new-generation HSSs, where photon noise, which depends on the spatially varying signal level, is not negligible.3, 4 We are thus studying the possible impacts of signal-dependent noise (SDN) on the performance and properties of existing TD algorithms.5, 6 TD is useful in both military and civilian applications. It is used for vehicle detection and tracking, ship detection, surface mine detection, and generally in applications needing detection of specific materials.

We derived interesting results5 by analyzing the Reed-Xiaoli detector (RXD),2, 7 which is one of the most popular anomaly detectors (ADs). ADs play an important role in HSI exploitation because they can detect objects in a cluttered background, without assuming any prior knowledge of the target spectral features.2 RXD is usually implemented following a locally adaptive approach. Local demeaning is performed first using a small sliding window to make the image locally Gaussian, that is, so that the neighborhood of each pixel can be statistically described by a Gaussian model. Then, we derive the decision statistic by assuming local spatial stationarity of the data covariance matrix. In principle, RXD has the constant false-alarm rate (CFAR) property, meaning the decision statistic does not depend on the background signal levels and is spatially stationary all over the image. CFAR is particularly attractive in automatic systems such as automatic aerial surveillance systems, since it allows setting of a unique detection threshold to get the same false-alarm probability all over the scene, irrespective of the background classes.

We already demonstrated the CFAR behavior of the RXD assuming a signal-independent noise (SIN) model. However, assuming an SDN model,4 we recently proved5 that the RXD statistic depends on the background level (i.e., RXD is not CFAR) even if the spatially varying mean is perfectly removed and the residual background signal is locally stationary. This theoretical analysis is supported by simulations showing that the SDN indeed determines a spatially varying statistical behavior (strictly related to the background variation within the scene) of the RXD statistic. Such variability is sensibly reduced when only the SIN is present. This result has inspired a new CFAR detector called noise-whitened RXD (NWRXD),5 which improves the RXD's robustness with respect to the CFAR property in the presence of SDN. NWRXD applies a nonstationary transform noise whitening (NW) aimed at reducing the noise spatial variability before the RXD's execution. The NWRXD block diagram in Figure 1 shows that NW is achieved by exploiting estimates of the noise variance for each band and for each pixel. The noise variance values are obtained by a recently proposed method that combines multilinear regression and the hyperspectral noise parameters estimation (HYPNE) algorithm to estimate the useful signal and the noise model parameters.4 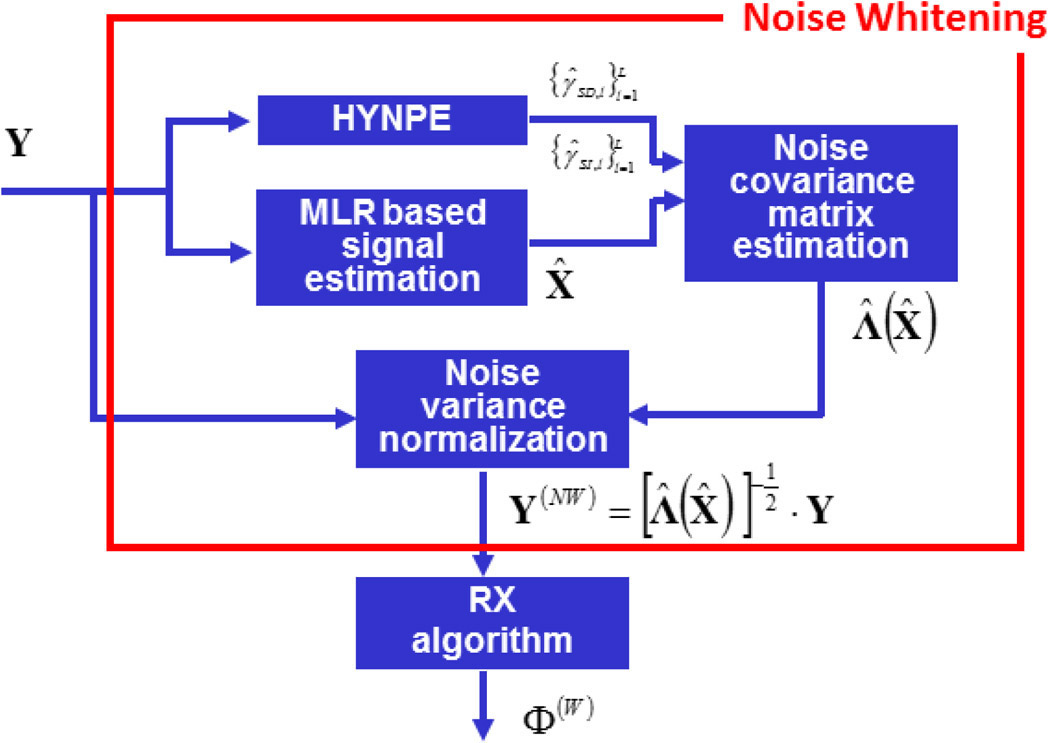 As experimental evidence, consider an HSI that was collected by a new-generation airborne HSS with 512 spectral channels over a typical rural scenario where six different man-made target objects (T1–T6) were placed: see Figure 2(a). Figure 2(b) shows the map of the scene's five regions having similar spectral signatures obtained by the well-known K-means algorithm. Such a map is useful to show the improvement introduced by the noise whitening. The RXD and the NWRXD statistics obtained on the HSI are represented in Figure 3(a) and 3(b), respectively. 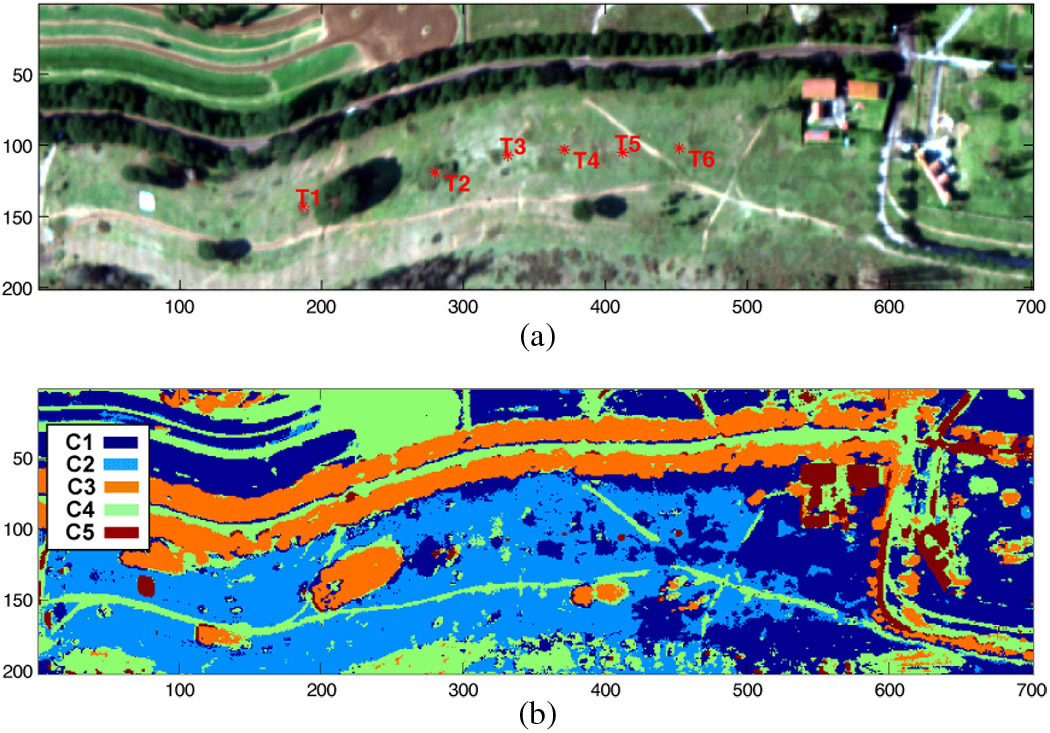 Figure 2. (a) Red-green-blue representation of a hyperspectral image (HSI). (b) Clusters map for the real HSI shows five clusters (C1–C5). 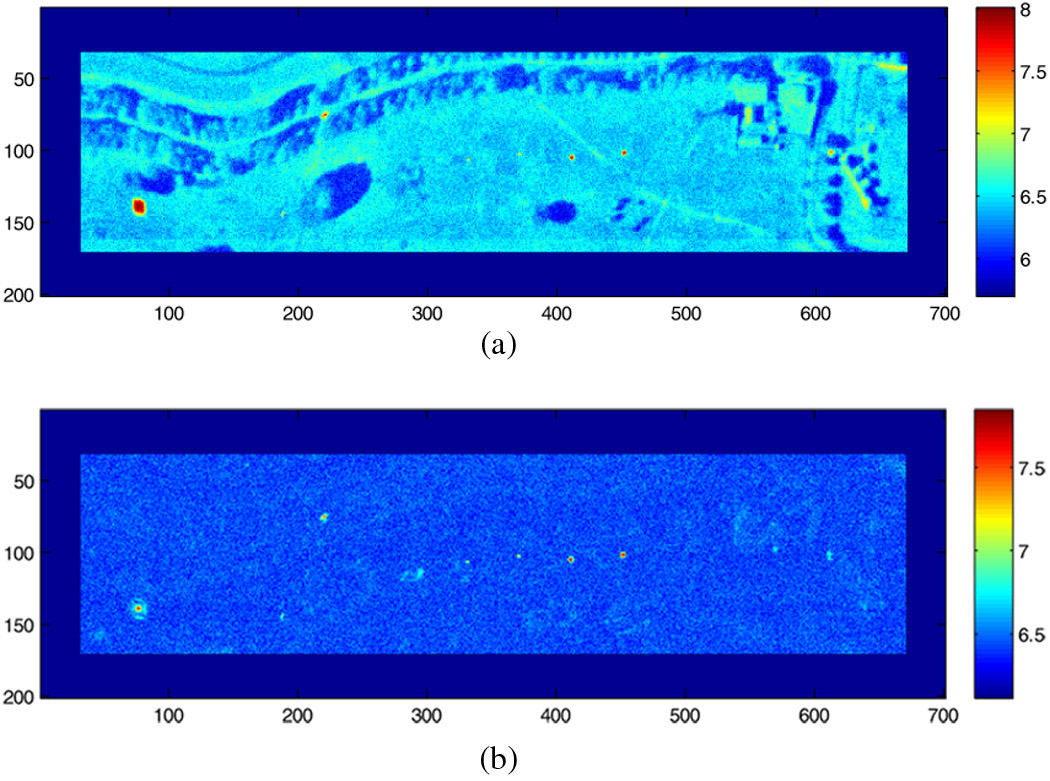 The comparison of Figures 3(a) and 2(a) clearly shows that the spatial variability in the RXD statistic closely follows signal variations related to the background texture. For instance, the tree-lined road at the top of Figure 2(a), as well as the tree and the corresponding shadow between T1 and T2, can be clearly seen in the statistic image. Conversely, in the NWRXD statistic, the residual clutter over the background areas is spatially stationary and the background structures are effectively suppressed. Background suppression does not come at the expense of target detectability, because the values of the statistic are still high in the pixels of the T1–T6 targets and in a few other small-size anomalies.

Figure 4 shows the probability density functions (PDFs) estimated on the AD statistics over the background classes, C1–C4, depicted in Figure 2(b). The RXD statistic PDFs in the four clusters are quite different, as seen in Figure 4(a). This demonstrates experimentally the RXD's non-CFAR behavior. Conversely, Figure 4(b) shows that the PDFs of the NWRXD statistic on the clusters are very similar, proving that NW enhances the CFAR of the AD algorithm. 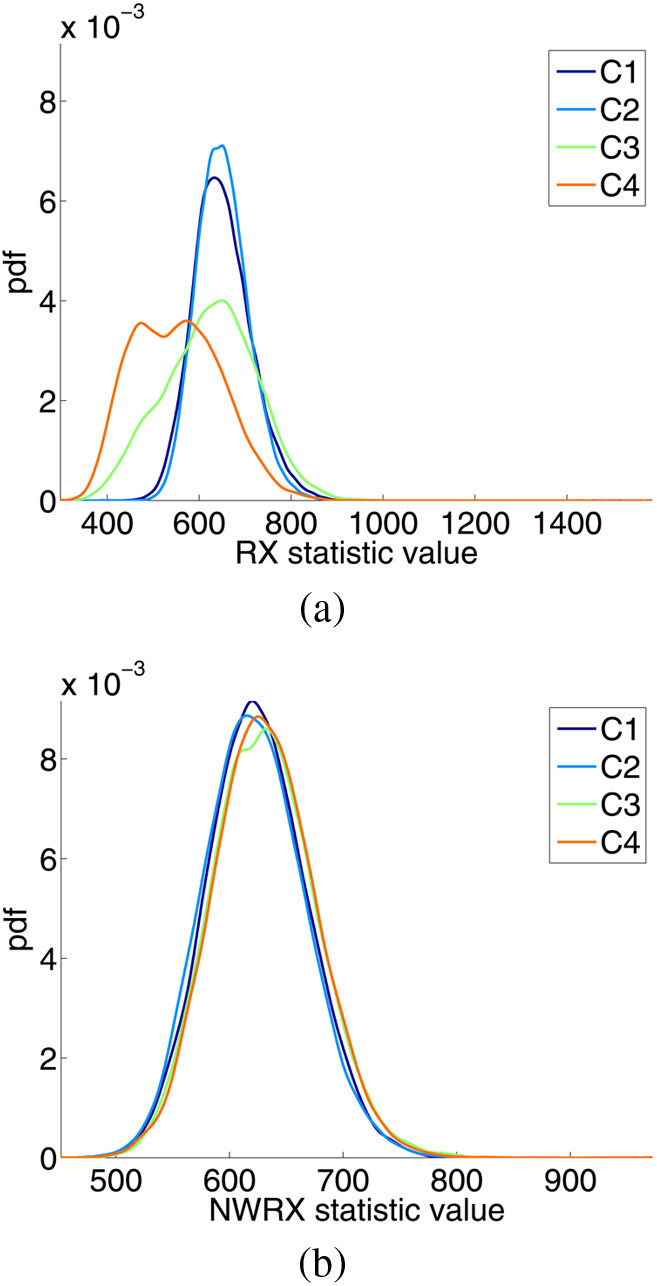 Our analysis of the RXD leads us to two conclusions: First, SDN may affect the properties of existing TD algorithms, thus encouraging future work about the impact of SDN. And second, NW is a promising technique for improving the CFAR of TD algorithms and for enhancing background suppression in the presence of SDN. Our ongoing activity is aimed at demonstrating the benefits arising from using the NW procedure in mitigating the impact of the SDN in different algorithms for hyperspectral data exploitation.