The sub-20nm region is an emerging technology for the next generation of powerful microscopes, telecommunications, and high-performance computing devices. Such applications require pushing the limits of nanofabrication to new levels of precision and control. With an accuracy in the sub-5nm region, helium ion beam milling is one of the most advanced techniques of fabrication.1–3 The milling process is carried out in a helium ion beam microscope (see Figure 1), which is not only an imaging tool but also a nanofabrication device. Its imaging resolution is higher than that of a scanning electron microscope because of the larger mass, resulting in a smaller De Broglie wavelength of the helium ion beam. Further, its milling resolution is higher than that of a focused ion beam, which uses a gallium source, because of the reduced sputtering yield caused by the smaller mass of the helium ion compared to gallium. 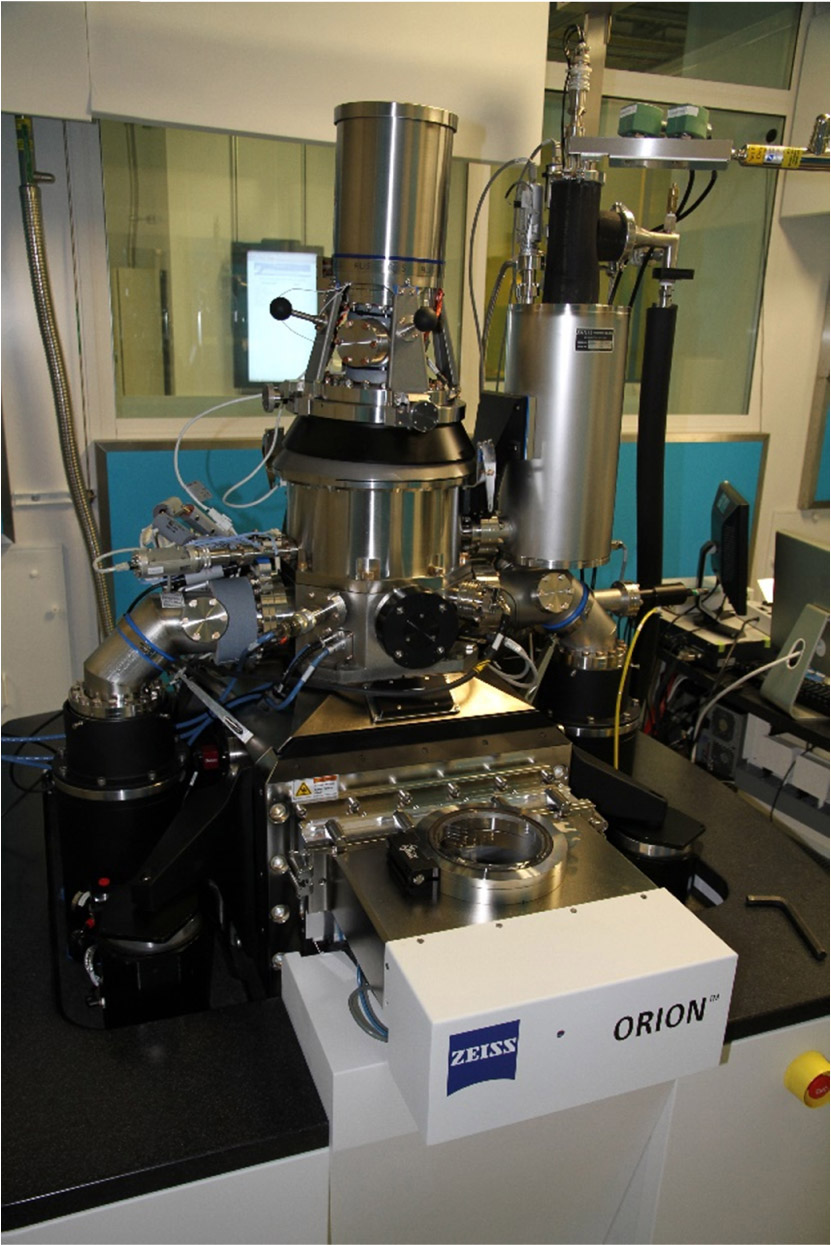 Figure 1. A Carl Zeiss ORION PLUS helium ion beam microscope in the Nanofabrication Centre of the University of Southampton.

Our recent work shows the ability of the ultrafine control of the helium ion beam milling process to remove Au (gold) atoms layer by layer from the surface of a patterned Au film (see Figure 2). Because the technique is highly reproducible, we can have precise control at the 1nm level of the milling thickness by using the milling depth-dose curve. In addition, we can use the resistance of the milling area2 to detect how much material has been ground to a resolution of 2nm in depth. When the structure is milled close to the bottom (more than 85% of material removed), the resistance cannot reliably show the thickness of the material left due to the thin film scattering of electrons. However, at this point, it is possible to sensitively calibrate the presence of the remaining Au bridge through the optical properties of the metal nanostructure.3 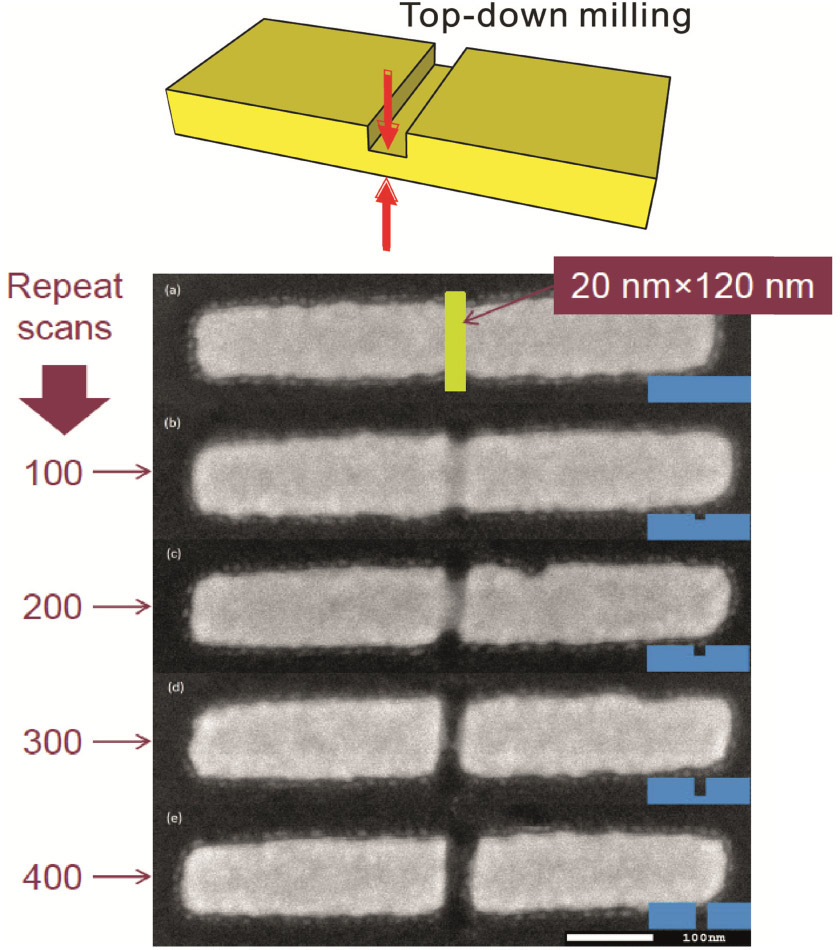 Figure 2. Scanning electron microscope images of helium-ion-beam-milled nanoantennas. The milling doses are varied from 0 to 400, repeating the base dose with a step of 100 to create milling depths from 0 to 20nm with a step of 5nm in a 20nm-thick Au (gold) film.

We have fabricated metal nanorods with precisely controlled shapes using a combination of e-beam lithography and helium ion beam milling. Such metal nanorods show strong peaks in the optical spectrum known as surface plasmon resonances. Analogous to radiowave antennas, plasmonic nanoantennas have been designed to confine light into a scale much smaller than their wavelength.4 By using single antenna spectroscopy, we have shown that the optical spectrum of a nanoantenna is very sensitive to the amount of Au left in the gap.3 With the ability to precisely control the milling width and depth, we fabricated two types of nanoantenna gap loading, created by milling from top to bottom (see Figure 2) or from the sides to the center (see Figure 3). The optical absorption spectra in Figure 3 show the change from capacitive coupling (completely milled through) to conductive coupling (no milling). In the capacitive coupling regime, the antenna supports two half-wavelength oscillations over the total length, with a large charge pileup in the gap (see Figure 4). This charge provides a strong capacitor, which shifts the resonance to longer wavelengths. For the connected rods, the short circuiting of the gap removes the charge pileup and the mode shifts to the blue. Eventually, a higher-order mode is formed with three half-wavelength oscillations over the antenna length and with charges only at the antenna ends. 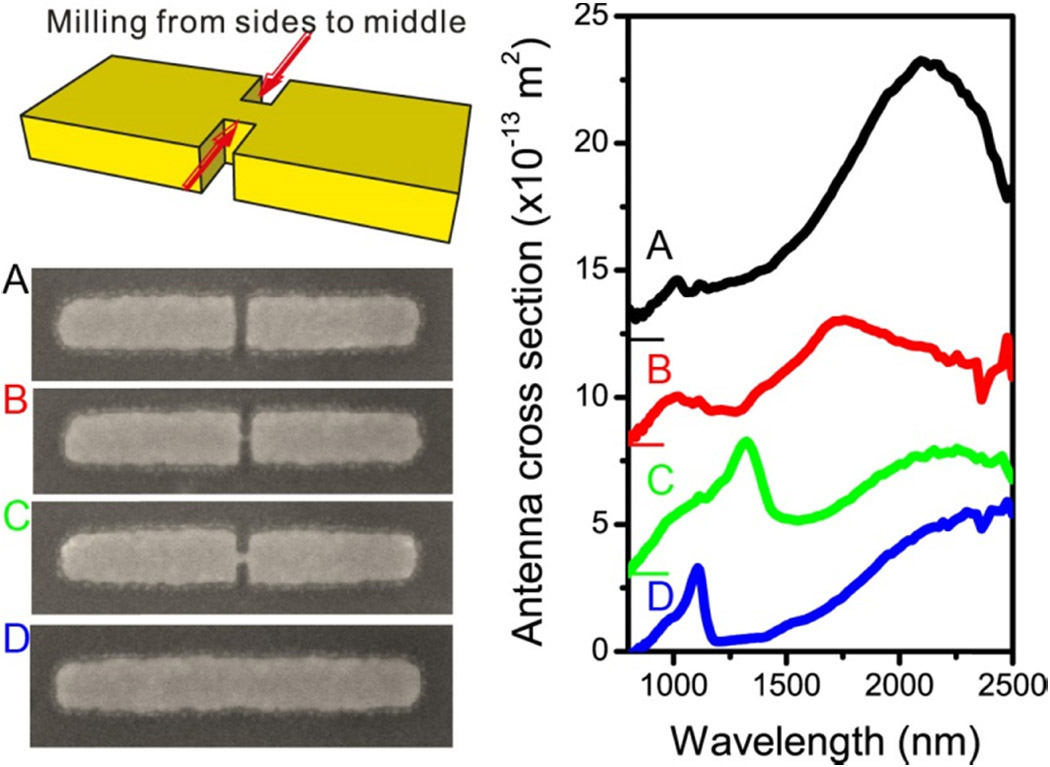 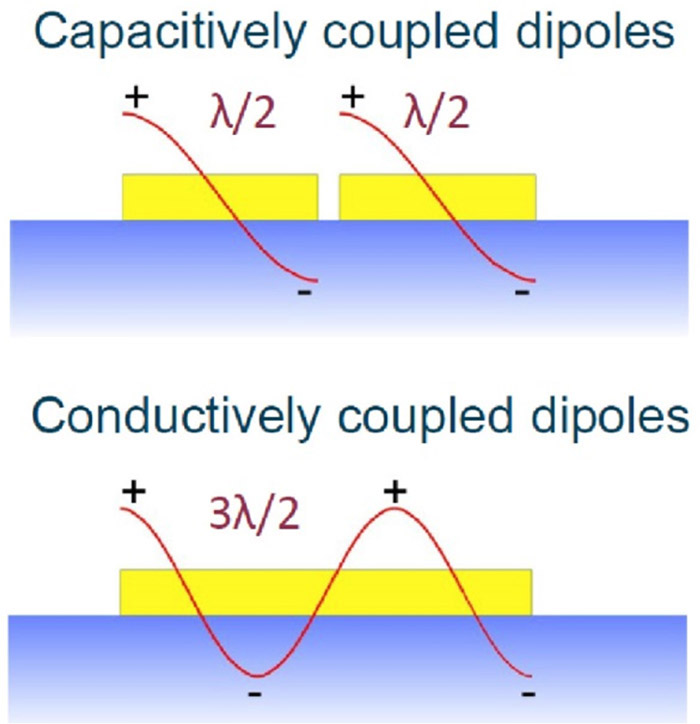 Our precise structuring has provided access to the regime of partially loaded gaps where the device works in between the capacitive coupling and inductive coupling (see antennas B and C in Figure 3). This regime corresponds to the situation where a volume of Au of only a few percent is loaded in the gap, equivalent to 5–10nm in width in the milling from sides to center (see Figure 3) and 2–3nm thickness of the full width in the milling from top to bottom (see Figure 2). This window of partially loaded gaps is particularly interesting because of the ability to precisely control the resonant wavelength with a minute amount of material. This has practical applications in sensing or nonlinear tuning of antennas using external control signals. Recently, we have explored milling of other types of antennas, such as L-shaped ones that are of interest for polarization control and metasurfaces.5 Future work will focus on improving the controllability of the helium ion beam milling process to achieve structuring and gaps on even smaller scales. Such plasmonic nanogap structures open up new explorations of nonlocal and quantum effects and will push the limits of field-enhanced and nonlinear spectroscopy.

Otto Muskens is a professor in physics and astronomy and an Engineering and Physical Sciences Research Council (EPSRC) research fellow. He is leading the EPSRC-funded project on electrical control of plasmonic nanoantennas. His research interests include plasmonic nanoantennas, single-nanoparticle optical spectroscopy, and the photonics of nanostructured materials such as semiconductor nanowires.

Stuart Boden is a lecturer in nanoelectronics. His research focuses on the development of applications related to helium ion beam microscopy and plasmonics in photovoltaics.

Cornelis Hendrik de Groot is a professor in nanoelectronics. His research interests include spintronics, phase-change memory, the integration of nanotechnology with silicon nanoelectronics, and electrical control of plasmonic nanoantennas.

Javier Aizpurua is a CSIC research professor. He studies the excitation of localized surface plasmons in metallic particles induced by a variety of external probes, including light.