Detection technologies for the UV and visible range are well established, but many are limited by either performance or size, weight, and power. The ubiquitous silicon-based photodiodes are cheap and reliable but suffer in UV applications, while photomultiplier tubes offer high performance but can be unreliable and power hungry. To solve these issues we developed a novel morphology and device architecture using gallium nitride as the functional material. Here, we outline our efforts to develop high-efficiency nitride optoelectronic devices, the properties of which are particularly dependent on morphology.

To develop these systems, we considered recent improvements in commercial LED structures, which enable high efficiencies in light extraction by controlling internal photon reflection and scattering dynamics. For nitride-based LEDs, if the active area is formed on a cystallographic plane other than the conventional polar c-plane, we can achieve improved carrier (electron and hole) dynamics associated with reduced internal electric fields. By extension, PIN diode-based detectors that exploit such morphologically tuned properties can have much higher detection efficiencies than planar devices. In conventional planar diodes, the active area (the depletion region) is coincident with the substrate surface, while in radial diodes the depletion region is orthogonal to the surface. With respect to photon absorption, the active regions of planar and radial diodes are, respectively, perpendicular and parallel to incoming photons (see Figure 1). Full realization of such 3D PIN diode detectors could enable a viable solid-state replacement for the costly, bulky, and power-hungry photomultiplier tubes used in scintillator-based radiation detection applications. 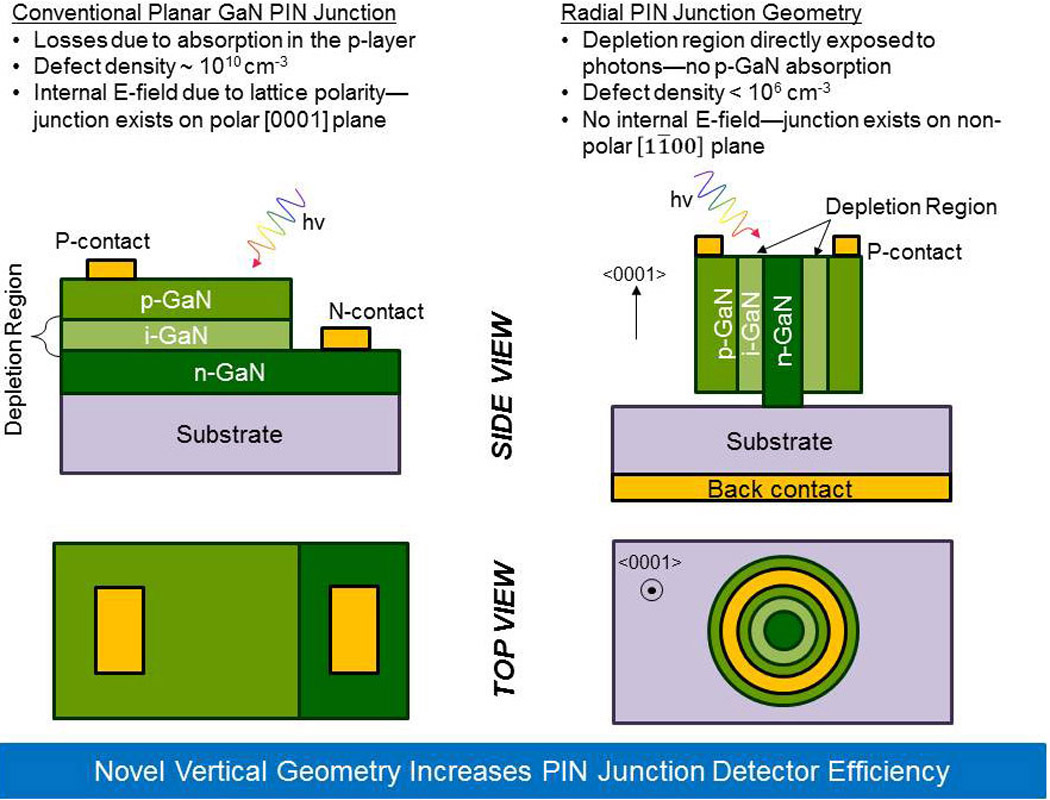 Previously1 our team demonstrated processes for creating vertical gallium nitride (GaN) pillars based on low-cost GaN-on-silicon epitaxy (deposition of crystalline layers upon substrates). It is possible to accurately control the morphologies of these structures by varying the parameters for inductively coupled plasma (ICP) etching (see Figure 2). The resultant structures have unique optical characteristics and can be used as nanostructured optical cavities. Furthermore, when we use these n-type GaN pillars as a template for epitaxial growth of p-type GaN shells, we can achieve significantly improved optical and structural properties.2 We can further control characteristics of the novel core-shell structure using different growth methodologies: hydride vapor phase epitaxy and metallorganic chemical vapor deposition. Figure 3 reveals the effect of epitaxial growth conditions and methods on the resultant shell morphology, where variations in sidewall inclination represent the range of achievable polarities.

The authors gratefully acknowledge the support of Dave Peterson and the Defense Threat Reduction Agency. This work was supported by the DTRA Basic Research Award HDTRA1-10-1-0107.

Matthew King is a senior engineer in the Advanced Technology Laboratory. His primary focus is on advances in multifunctional materials and devices, particularly nitrides for electro-optical and radio-frequency applications. He is PI in a variety of multidisciplinary efforts, holds five patents, and has more than 30 trade secrets.