Organic semiconductors are electrically conducting carbon-based materials with structures similar to dyes and plastics. They can be dissolved in solvents, and so they can be printed at room temperature like inks using jet-printing or roll-to-roll coating (like newspapers) onto a flexible substrate.1 As a result, they are attractive as a basis for low-cost displays, sensors, and solar cells. Organic light-emitting diodes are already commercial products in displays for mobile phones, and much effort has been directed at expanding their use.

Very recently, organic semiconductors have been considered as thermoelectric materials,2 which convert heat to electrical energy (and the reverse) with no moving parts. Thermoelectric modules can be used for waste heat scavenging as well as local cooling applications, such as temperature control of optical switches. The power-conversion efficiency of a thermoelectric material is related to the figure of merit ZT =(α2σ)T/κ, where α is the thermopower, σ is electrical conductivity, κ is thermal conductivity, and T is temperature. ZT of more than 0.5 is considered useful for applications, and a ZT as high as 0.4 has recently been demonstrated in a common organic semiconductor named PEDOT.3 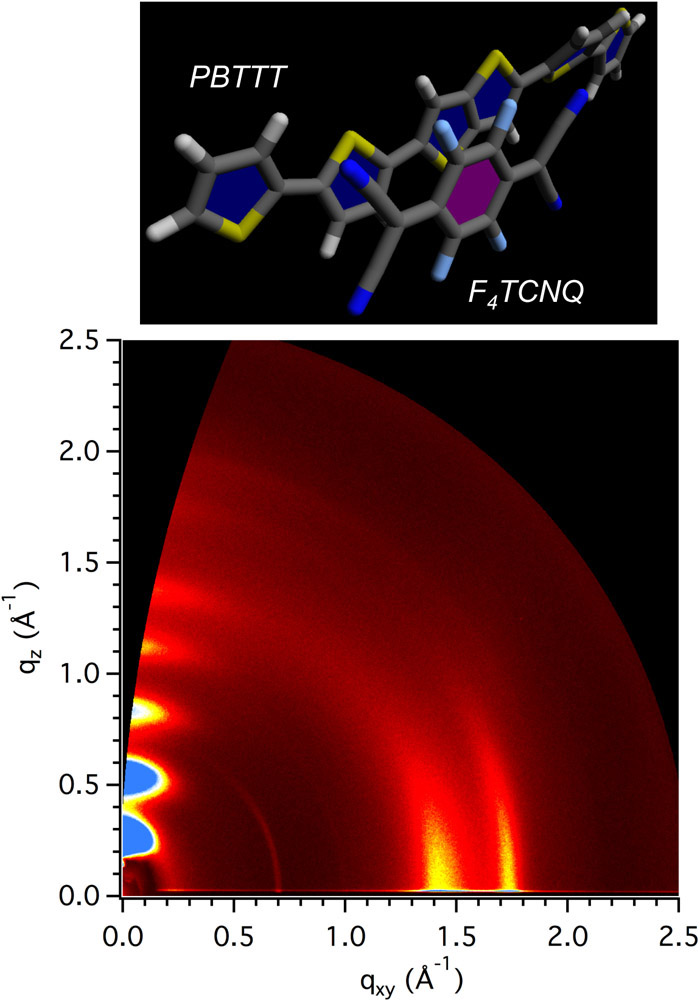 Figure 1. (top) Structural model of the interaction between the semiconducting polymer, PBTTT, and the molecular dopant, F4TCNQ. (bottom) Grazing incidence x-ray scattering shows that blends of PBTTT and F4TCNQ are highly ordered. 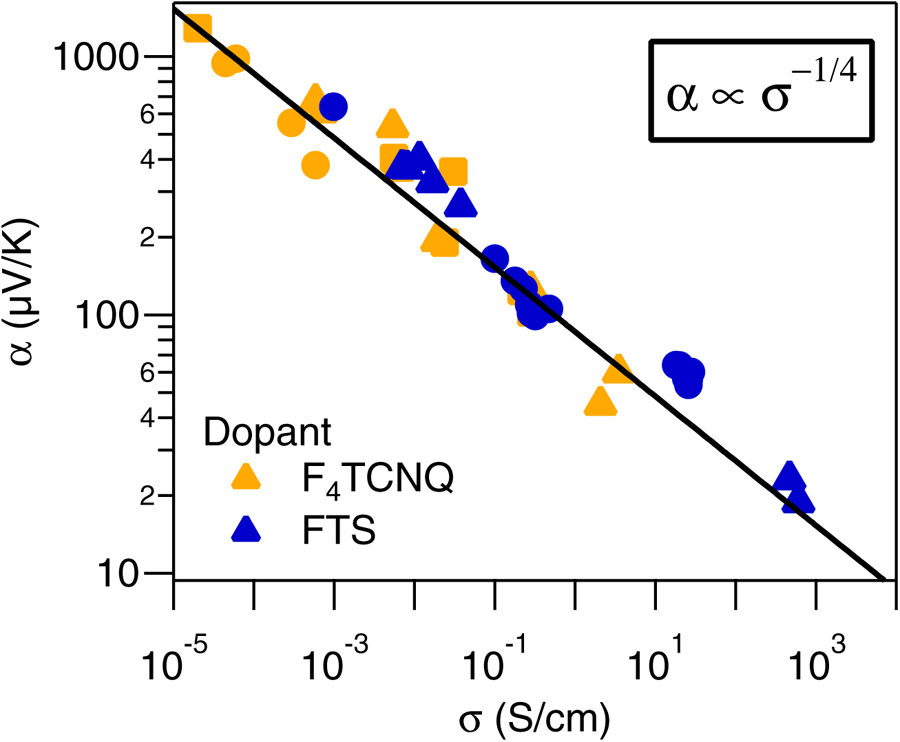 Semiconducting organic polymers are poorly ordered in comparison with inorganic crystals, but recent advances in controlling this ordering have led to highly efficient charge transport. Tuning electronic properties via doping often requires large molecular species to be introduced instead of single atoms as is the case with conventional inorganic semiconductors (see Figure 1). Adding dopants can disrupt the molecular ordering, increasing disorder and degrading charge transport.

We studied the thermoelectric properties of polymers already known to perform well in thin-film transistors, both to assess the viability of these high-performing materials for thermoelectric applications, and to understand the underlying mechanisms of charge transport. To explore the effects of doping and microstructure on organic semiconductors, we studied the thermoelectric properties of a series of structurally similar polymers doped with two different mechanisms that affect microstructure in different ways. These complex thiophene-based polymers, generally known as P3HT, PBTTT, and P2TDC17-FT4 for simplicity, have similar high field-effect carrier mobilities5 The first doping mechanism involves introducing a molecule, tetrafluoro-tetracyanoquinodimethane (F4TCNQ), in solution with the polymer in various molar ratios to the repeat units of polymer. We found that F4TCNQ can be incorporated into ordered regions of these polymers with a different molecular packing structure from undoped polymers, leading to high electrical conductivity. We used a combination of spectroscopy and x-ray scattering to elucidate this structure and complement the electrical measurements. In contrast, the second doping mechanism involves vapor deposition of a different small molecule, a perfluoroalkyl trichlorosilane (FTS), onto the surface of the pristine polymer thin film, which does not disrupt the polymer in the way that the F4TCNQ does.

A key issue for developing organic thermoelectrics is understanding how thermopower changes with the electrical conductivity, which maximizes the numerator of ZT. Our studies of these doped semiconducting polymers revealed that as the doping increased, electrical conductivity increased. However, the thermopower decreased, as expected for conventional semiconductors. A clear trend in the form of a power law emerged when comparing electrical conductivity to thermopower across both doping mechanisms. It is striking that this trend exists over nearly nine orders of magnitude of conductivity for two fundamentally different doping mechanisms (see Figure 2). Additionally, when we compiled existing thermoelectric data for these and other polymers, we noticed that the data also follows this trend.6

In summary, we proposed and demonstrated a method to determine whether new thermoelectric materials exceed the performance of existing materials. Our future work will focus on understanding the relationship of processing methods to thermopower and the impact on the thermal conductivity. If successful, this work could lead to novel thermoelectric modules for wearable waste heat scavengers and low-cost thermal control modules for electronics and optics.

Anne M. Glaudell is a doctoral student in the Materials Department. She received a B.S. in physics from University of Illinois Urbana Champaign. Her graduate research is focused on transport in thin-film materials for thermoelectrics.

Michael L. Chabinyc is a professor in the Materials Department. Prior to joining UCSB, he was a senior member of research staff at (Xerox) Palo Alto Research Center. His current research interests include flexible electronics, organic semiconductors, photovoltaics, and thermoelectrics.