Since the initial discovery of planets orbiting other stars was made almost two decades ago,1 astronomers have been interested in studying their atmospheres. Light emissions, at multiple wavelengths, can be used to learn about atmospheric atomic and molecular content, and to estimate the temperature of these planets. The measured spectra can also be used to search for features such as clouds or hazes.2 Detailed examinations of such spectra can be used to probe the formation and evolution of the planets,3 and to further elucidate the origins of our own Solar System. The first studies of exoplanetary atmospheres were made with the transit spectroscopy method,4 which can be conducted on planets that transit their host star, but generally requires space-based instruments. The majority of measurements that have been made so far with this technique have low spectral resolution and thus sample only a limited number of light wavelengths. In addition, the transit spectroscopy technique is mostly used to characterize planets that are very close to their host star. At such locations, the extreme heat can greatly impact the planetary atmosphere.2

A planet's spectral transmission is measured in the transit spectroscopy technique by comparing observations made during planetary transit (i.e., with spectra that contain star light that has passed through the upper layers of the planet's atmosphere) with observations made when the planet is out of transit. This type of characterization has already yielded several exciting results, including the discovery of exoplanet superwinds and hazes.5, 6 An ideal technique for studying exoplanet atmospheres, however, involves targeting the exoplanet directly with moderate- to high-resolution spectrographs. This allows confusion with the host star to be avoided and permits more detailed investigations of the atmospheric properties. This complex task has been difficult to accomplish due to the small angular separations of exoplanets and the extreme difference in planet and star brightness. Recent advances in technology, however, mean that actual images of exoplanets can now be obtained.7

With our ‘direct imaging’ technique for exoplanet discovery we use advanced adaptive optics (AO) systems10 and image processing to separate the light from a planet and its host star at near-IR wavelengths.11 We use the AO to correct for the blurring (caused by the Earth's atmosphere) that affects ground-based telescope observations and thus provide the diffraction-limited resolution that is necessary to resolve tightly packed exoplanets. The advanced image processing methods we use, such as the Template Locally Optimized Combination of Images (TLOCI)12 algorithm, remove residual uncorrected starlight from the measured image or spectrum.

A near-IR spectrum of the planet HR 8799c (one of four imaged planets orbiting an approximately 30-million-year-old star) illustrates the potential of our direct imaging spectroscopy approach (see Figure 1).13,14 With our technique, we are able to measure the transmitted light from HR 8799c directly and can therefore use a conventional spectrograph, coupled with an AO system, to achieve high spectral resolution (nearly 2000 individual wavelengths are sampled in each observation). At this resolution it is possible to resolve atmospheric water and carbon monoxide spectral lines. We therefore prove that both these species are present and abundant in the atmosphere of this exoplanet.8 The planets that are measured with the direct imaging method tend to be young and widely separated from their host star. This means that their atmospheres should be mostly unaffected by evolution or stellar emission and our view of their atmospheres is representative of the pristine outcome of planetary formation processes. Using the resolved molecular features in the spectra from HR 8799c, we conclude that this planet formed in a similar manner to the planets in our Solar System.3, 8 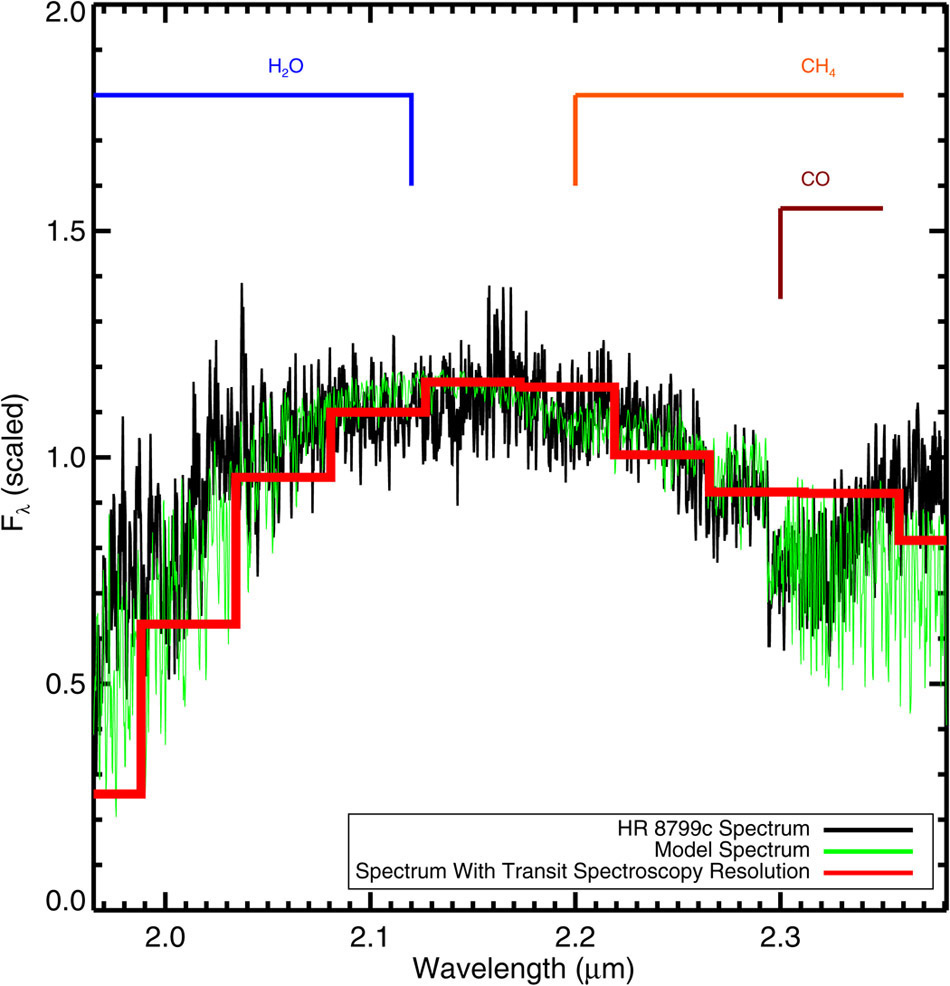 Figure 1. A moderate-resolution spectrum of the directly imaged exoplanet HR8799c at near-IR wavelengths (∼2.2μm), obtained over 5.5 hours with the OH-Suppressing IR Imaging Spectrograph (OSIRIS) at the Keck II 10m telescope.8A modeled best fit to the spectrum is shown in green. The spectrum is also shown at the typical resolution that can be achieved with transit spectroscopy (red). The wavelength ranges for the diagnostic molecular features of water (H2O), methane (CH4), and carbon monoxide (CO) are indicated. Fλ: Flux.

A new generation of instruments, designed specifically for direct imaging of exoplanets, achieved first light in 2013. Nearly all of these new instruments have imaging spectrographs as their primary science instruments.15–17 Although the spectral resolution that will be achieved with these instruments is lower than what we obtained for HR 8799c, these spectrographs should revolutionize our understanding of Jupiter-sized planet atmospheres.

Our team is involved with the Gemini Planet Imager (GPI) project, which was recently commissioned for the Gemini South telescope in Chile.18 With GPI, we expect to discover many gas giant exoplanets that have a size range of 1–10 times the mass of Jupiter. We also anticipate that we will uncover a variety of new atmospheric properties. Theoretical atmosphere models for planets within the expected size and temperature ranges for GPI are shown in Figure 2. The instrument will provide spectra from 1.0–2.5μm. The shapes of such spectra and the broad spectral features they contain provide constraints on planet properties, such as temperature, gravity, cloud characteristics, chemistry, and atomic abundances.9 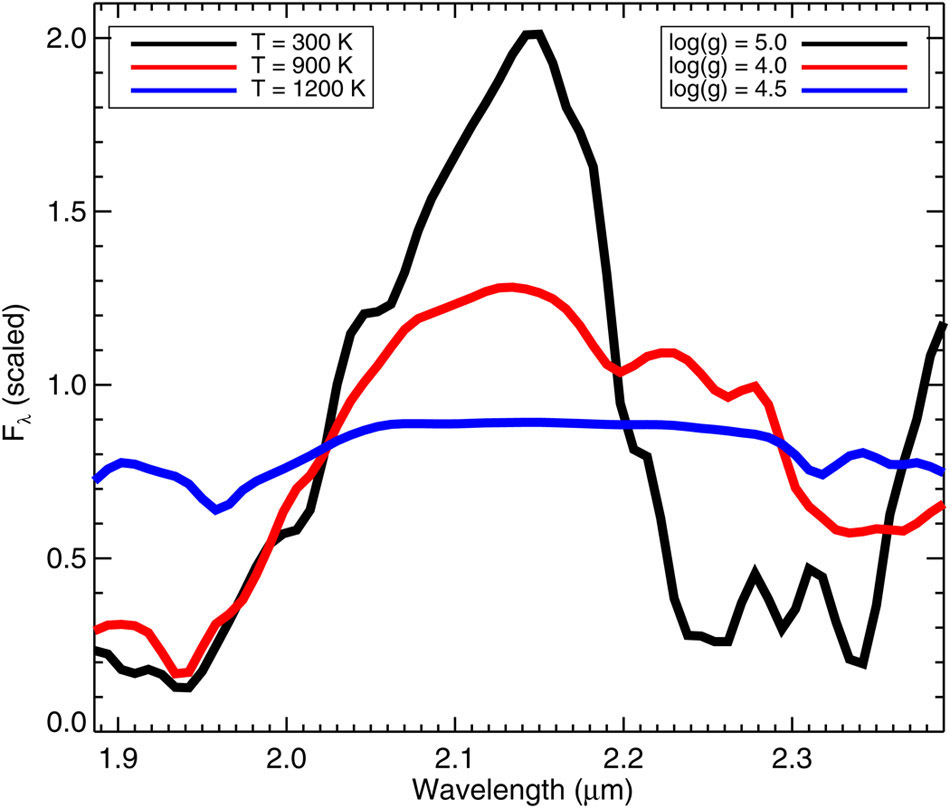 Figure 2. Examples of model planet spectra,9 which illustrate the variety the Gemini Planet Imager (GPI) is expected to observe. All three spectra are scaled so that they have the same integrated flux, but relate to planets with different temperature (T) and surface gravity (g). Although the GPI spectrograph will have a lower spectral resolution than is indicated in Figure 1, the spectral morphologies of the different models shown here are clearly distinct.

Our use of adaptive optics and advanced image processing provides high spectral resolution in the near-IR region and allows in-depth investigations of exoplanet atmospheres to be made. Future improvements to our technique will allow us to target planets with even closer separation to their host stars. Measurements at additional light wavelengths will also be possible and should allow observation of species such as iron and potassium. These techniques are essential to the GPI project that will be conducted from 2014–2017. This survey offers an unprecedented opportunity to study the diversity of Jovian-type planet atmospheric properties, and provide important insights into the complex processes of planetary formation and evolution.

The Gemini Observatory is operated by the Association of Universities for Research in Astronomy, under a cooperative agreement with the National Science Foundation (NSF) on behalf of the Gemini partnership: NSF (USA); the Canadian National Research Council; the National Commission for Scientific and Technical Research (CONICYT) in Chile; the Australian Research Council; Ministério da Ciência, Tecnologia e Inovação (Brazil); and Ministerio de Ciencia, Tecnología e Innovación Productiva (Argentina). This publication makes use of data obtained at the W. M. Keck Observatory, which is operated as a scientific partnership among the California Institute of Technology, the University of California, and NASA.

Quinn Konopacky is a Dunlap Fellow.

Travis Barman is an associate professor of planetary science.

Bruce Macintosh is a professor of physics.

Christian Marois is an astronomer at Herzberg and an adjunct professor at the University of Victoria.

Dmitry Savranksy is an assistant professor of mechanical and aerospace engineering.