A new light-intensity modulation technique arising from a changing surface normal can measure the physical properties of a vibrating surface.

Surfaces vibrate for a variety of reasons. In some cases these vibrations are useful, like in a speaker cone, and in others they are undesirable, like when a refrigerator door vibrates from the compressor. The ability to optically image such vibrations may lead to a better speaker or a quieter refrigerator. We have developed a passive optical technique to measure physical properties of a vibrating surface using the detection of light intensity modulation in light scattered from that surface.1–5 The intensity modulation arises from a changing surface normal and can be used to produce an image of this changing normal without touching the surface and altering its state. The approach has the advantage of being able to image any arbitrarily sized object to determine vibrational properties and the changing surface normal, with or without active illumination.

The foundation of our technique is the geometrical optics treatise on reflectance published by Nicodemus and collaborators in 1977.6 The article first defined the term bidirectional reflectance distribution function (BRDF): “The BRDF is a derivative, a distribution function, relating the irradiance incident from one given direction to its contribution to the reflected radiance in another direction.” In other words, the BRDF is a multidimensional surface: the relevant variables are not only the angle and solid angle of both illumination and observation, but also wavelength, polarization, and temporal modulation. Again to quote Nicodemus: “Reflection is the process by which electromagnetic flux (power), incident on a stationary surface or medium, leaves that surface or medium from the incident side without change in frequency; reflectance is the fraction of the incident flux that is reflected.” Nicodemus defines more complex scattering descriptors, but BRDF as a function of θi, φi, θr, and φr (where i is incident and r is reflected, and θ and φ are angles measured from the z- and y-axis, respectively: see Figure 1) is sufficient for our purposes. It is understood that real measurements are not made at an infinitesimal solid angle, and the incident and reflected fluxes are integrated over the solid angle of the illuminating source as seen by the reflecting surface and integrated over the observing solid angle. 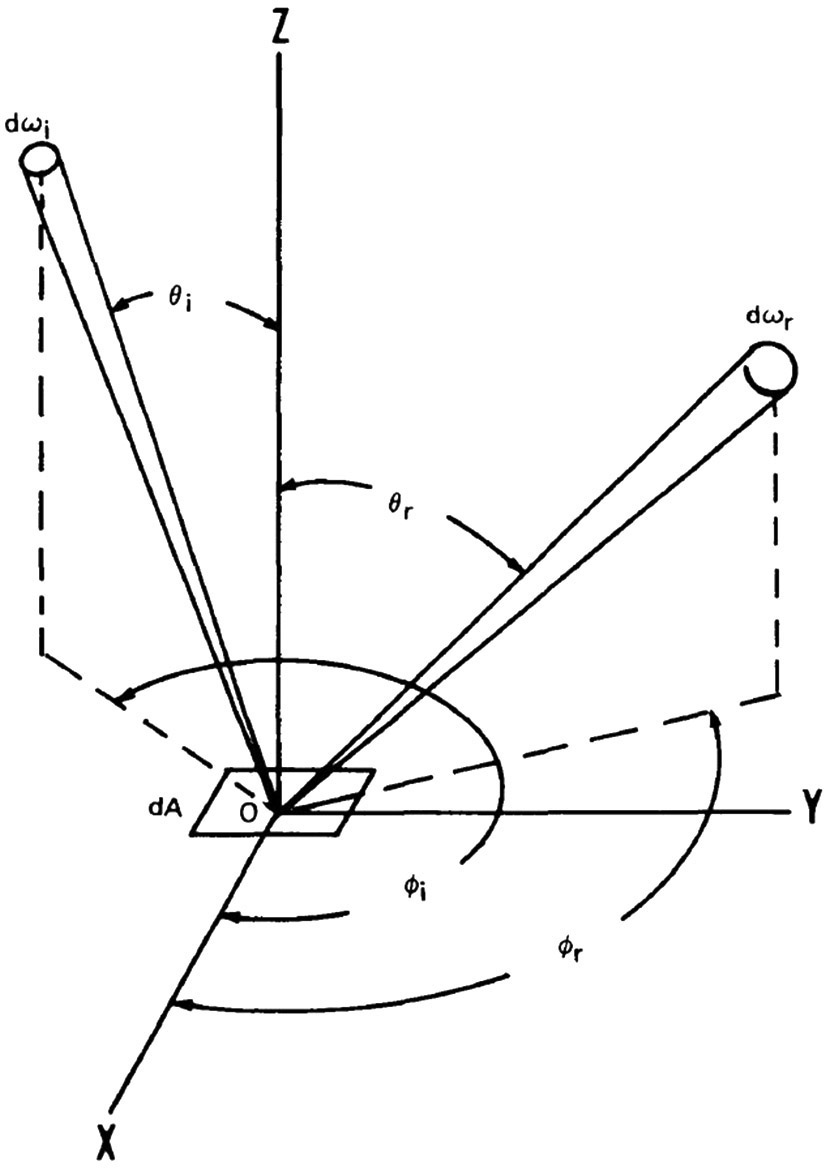 In Figure 2 we show examples of the BRDF from a nearly Lambertian scatterer (‘spectralon’) and a more complex scatterer called grass.7 This figure shows that the BRDF may be quite complex even before the addition of polarization, wavelength, and temporal variability. In short, although BRDF is often illustrated as a simple one-dimensional plot, it is a very complex multivariate function. 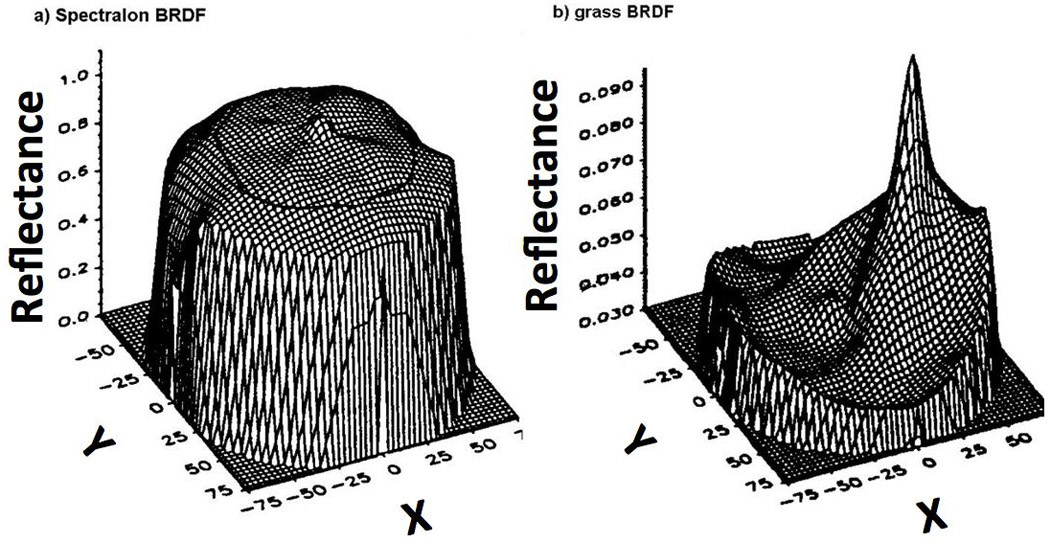 When a surface moves, as in a surface vibration, an infinitesimal unit area presented to the illumination source changes orientation, and the surface normal to that infinitesimal unit area will, therefore, deflect slightly. This results in a small modulated component in scattered light, which we exploit in our technique. Since we are using high dynamic range cameras with large focal planes for detection, the optics determines whether one images an entire object or a small portion thereof, precisely as in a cell phone or camera zoom lens, permitting great observational flexibility. This ability to image surface vibration on any scale is the great strength of this approach: it will work with a microscope for the infinitesimal or a fish-eye lens for a hemisphere.

Let us consider a simple case, the intensity modulation from a temporally varying circular membrane surface forced into the fundamental (0,1) mode. Surface motion deflects the surface normal at the edges and, as above, samples different areas on the BRDF surface and, therefore, modulates the scattered light (see Figure 3). In this case, the greatest surface linear motion is in the center of the membrane, but the greatest change in surface normal occurs at the outer rim of the membrane. This is an important distinction since we would normally think of the greatest motion as being in the center of the membrane and our optical approach should instead detect the greater surface normal deflection there. We did a simple experiment illuminated by the sun to illustrate this concept, using a pneumatic membrane stretched over a barrel in which we took images under inflated, neutral, and deflated states and differenced the images (see Figure 4). These images show the passive optical detection of the (0,1) mode. 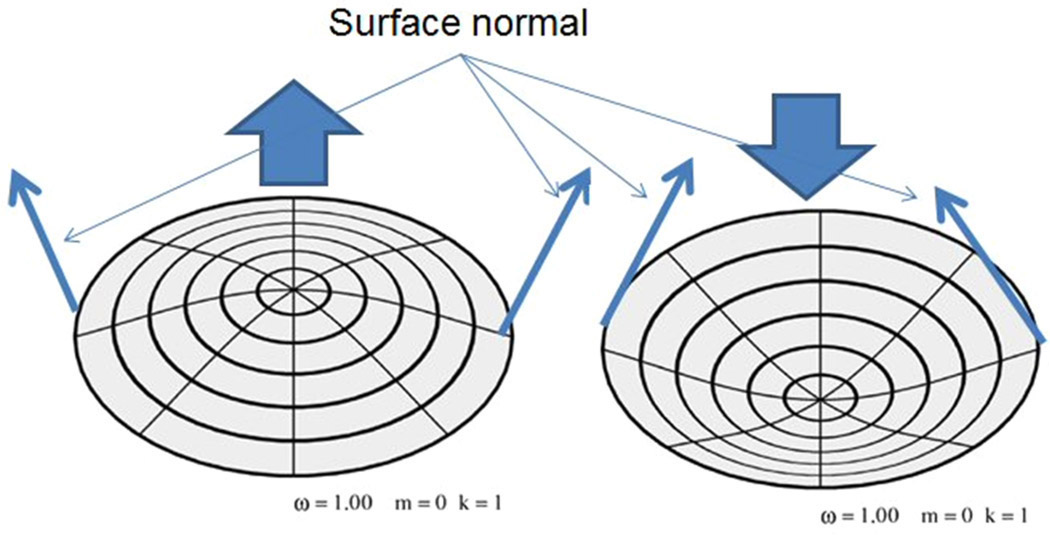 Figure 3. Circular membrane (0,1) mode. Changes in the surface normal are maximum at the periphery of the circle.

Figure 4. Fractional modulation of a pneumatic membrane forced into the (0,1) mode by inflating (left) and deflating (right) the membrane, relative to neutral pressure.

In summary, we have shown how we may use the small temporal modulation present in scattered light to extract vibrational properties of a vibrating surface. As an optical technique, it allows us to change the distance to the subject or use a zoom lens to examine any arbitrary surface area, the entire object, or a small portion thereof. The baseline detection depends only on the elemental surface area deflection, resulting in a change of irradiance. However, the detected modulation is enhanced over the temporal irradiance changes by the complexities of the physics of light reflection, which are hidden in the term BRDF. We have demonstrated optical detection of transients and the excitation of the fundamental mode in a circular membrane, demonstrating a modulation higher than predicted from irradiance changes alone.

However, we have raised more questions than we have answered. For example, what fraction of the detected intensity modulation is from surface normal deflection, geometrical shadowing, or lighting shadowing? What are the time-dependent intensity modulation effects from the shape of the slope of the BRDF, and from the surface texture? For each of these variables, can we quantify parameters that permit us to predict the detected fractional modulation from any given surface? Clearly a detailed mathematical model of light scattering (i.e., BRDF) is needed, so that we may take the partial derivative with respect to time and therefore predict how to optimize the modulation. This is the scope of our future work.

Frank O. Clark completed a PhD in astronomy from the University of Virginia in 1973. He went on to become a full professor of astronomy at the University of Kentucky, where he worked from 1975 until 1989. Between 1986 and 1988 he was a scientist at the Laboratory for Space Research in Groningen, the Netherlands, moving to the Air Force Research Laboratory in 1989 where he worked for 22 years. In 2011 he became a principal scientist at Spectral Sciences Inc.