In terms of brightness, size, color, efficiency, lifetime, and wider applicability, LEDs based on organic semiconductors (OLEDs) offer many improvements as compared to traditional LED technology. OLEDs have so far been successfully implemented in small-area displays. Their next target application is solid-state lighting.

Using the right contact engineering and photonic geometry—see Figure 1(a)—we successfully overcame the typically low IQE of fluorescent materials. We found that achieving efficiencies of more then triple the expected value (luminance efficiency ∼50cd/A, external quantum efficiency ∼15%) is possible by using a fluorescent polyfluorene-based polymeric material: see Figure 1(b).1 We used a polyfluorene derivative—poly(9,9-dioctylfluorene-alt-benzothiadiazole), F8BT—due to the band gap tunability it allows between blue and red wavelengths. Control over solid-state packing was also made possible by changing the side-groups on the main chain of the polymer, allowing further tailorability.2 Our studies provided a very important photo-physical insight into the efficiency boost that can be provided by long-lived triplet excitons. When charge carriers are electrically injected, these triplet excitons are generated at a rate three times higher than singlets. Subsequently, under steady state conditions, electrically neutral, long-lived triplet excitons collide with each other to form singlet excitons.3 Due to the resulting ratio shift toward more singlets, we have been able to observe an efficiency beyond that predicted by spin-statistics. 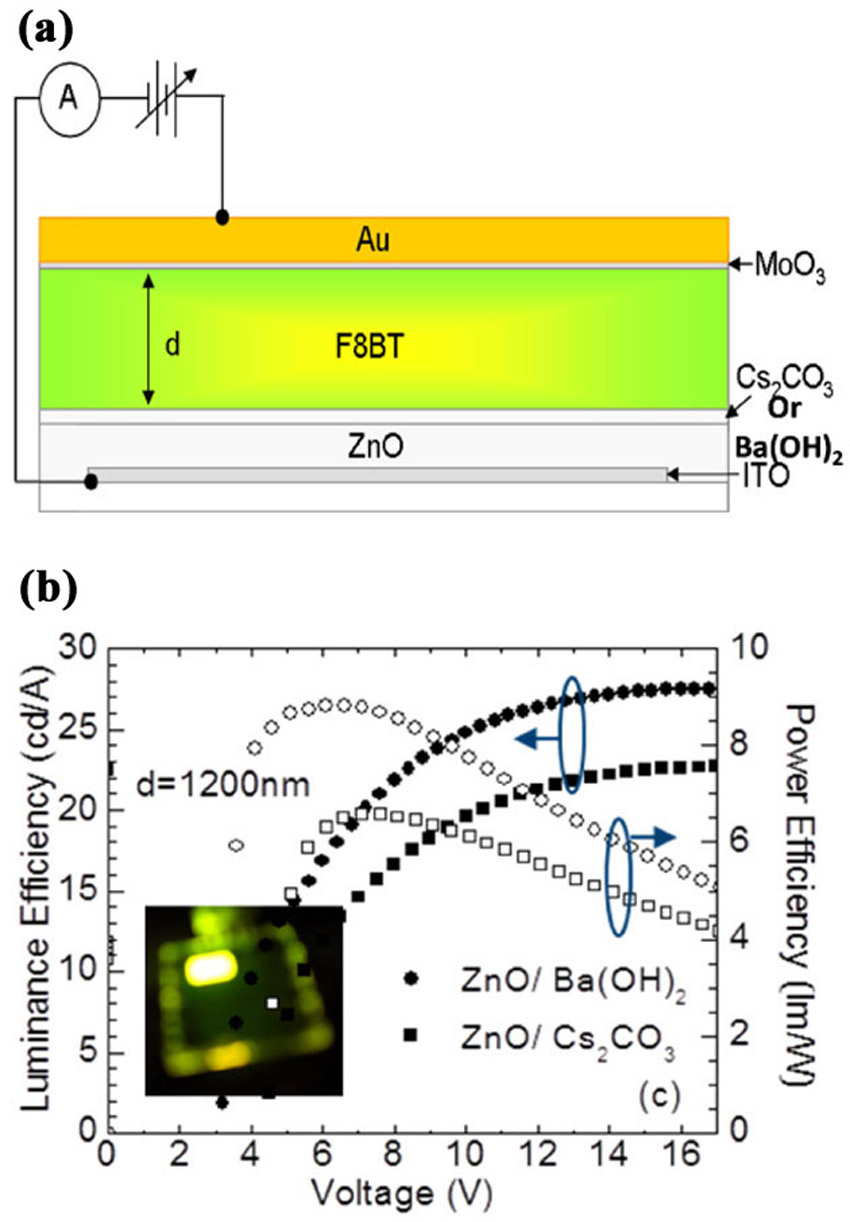 Figure 1. (a) OLED structure. The devices were fabricated on indium tin oxide (ITO) on glass substrates. Zinc oxide (ZnO), deposited above the ITO using spray pyrolysis, forms the cathode. An interlayer of barium hydroxide—Ba(OH)2—or cesium carbonate (Cs2CO3) was deposited via spin-coating to lower the work function and promote electron injection. For the emissive layer, conjugated polymer films—poly(9,9-dioctylfluorene-alt-benzothiadiazole), F8BT—were subsequently deposited using a similar method. After annealing at temperatures of up to 150°, a high-work-function anode (molybdenum trioxide/gold, MoO3/Au) was added by evaporation deposition. (b) Luminance and power efficiency vs. operating voltages. Inset shows operational OLED.

Our inverted devices—in which a cathode operates as the bottom electrode and an anode as the top electrode—provide a lossless electron-injecting contact and recombination zone close to the zinc oxide/F8BT (ZnO/F8BT) interface. Although the emissive layer in this device seems unrealistically thick (∼1200nm) when compared with standard OLEDs (∼100nm), operating voltages are nonetheless kept relatively low (∼10–15V) due to the Ohmic injection of holes from the molybdenum trioxide/gold contact.4 For efficient electron injection, we used cesium carbonate and barium hydroxide solution processed interlayers to form a low work function on the ZnO surface. This low work function promotes electron injection and enables the blocking of holes at the ZnO/F8BT interface, improving the charge carrier balance inside the emissive layer of the device. Having oxide layers as injection layers not only supports higher current handling capacity compared to organic injection layers, but it also provides additional stability to the device by preventing photo-oxidation and acting as a moisture barrier. The biggest advantage of these oxide injection layers is the favorable photonic geometry that they supply.

We also demonstrated optically pumped lasing in a poly(9,9-dioctylfluorene) (F8)-based OLED structure—see Figure 2(a)—representing a huge step towards electrically-driven organic semiconductor lasers.5 In the development of this device, we implemented a fabrication process similar to the one used in the F8BT-based OLED. However, nanoimprint lithography was employed to form a 1D periodic variation of the refractive index in the emissive layer using a holographic grating. 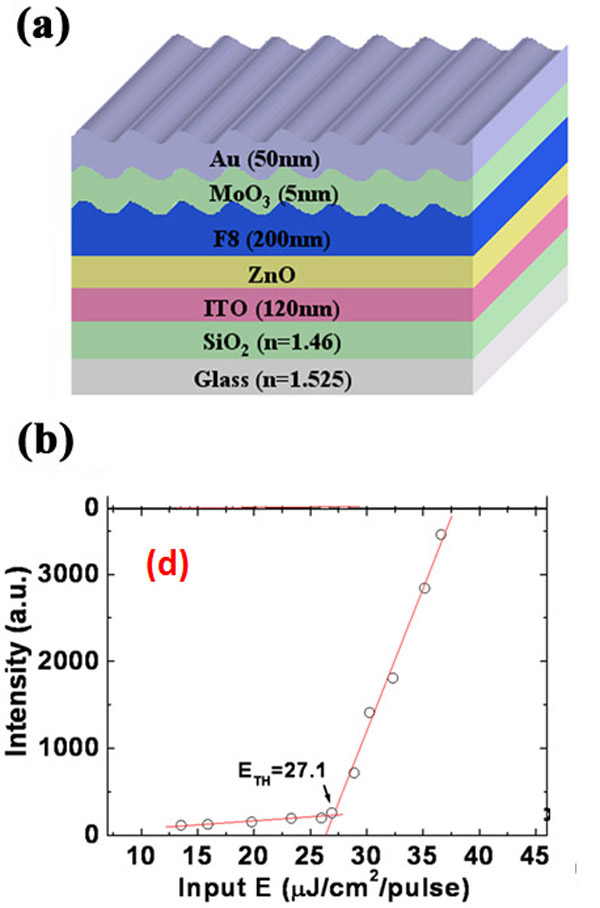 Due to the high refractive index (n=1.9) of ZnO, introducing the correct cathode thickness (120nm) allows for the confinement of optical modes. In addition, the reduction of optical losses in the emissive layer due to its photonic structure enables optically pumped lasing. We were able to induce lasing from the corrugated F8 film by exciting the materials within the device using a pulsed UV laser source (355nm, 300Hz). The threshold of this laser—see Figure 2(b)—is in the range of few nJ and could, therefore, be pumped using incoherent high-power LEDs. These devices may provide a versatile, portable, economic laser source for point-of-care applications.

By implementing ZnO and polyfluorene-based polymeric materials as cathode and emissive layers, respectively, we developed a photonic geometry that improved the output efficiency of the resulting OLEDs by up to three times. The reduction of optical losses in these devices also enables the development of optically pumped lasers based on a similar structure. We are now working towards electrically-pumped multicolor organic semiconductor laser modules with low cost and high portability.

Dinesh Kabra is an assistant professor. Prior to this, he was a Herchel Smith Research Fellow in Cavendish Laboratory, UK. He acquired his PhD from JNCASR, Bangalore. His current research focuses on the design of high-performance optoelectronic devices.

Sir Richard Friend (fellow of the Royal Society and fellow of the Royal Academy of Engineering) is Cavendish Professor of Physics at the University of Cambridge, and Tan Chin Tuan Centennial Professor at the National University of Singapore. He was a pioneer in the field of organic semiconducting devices and has founded many companies based on them. His research remains focused on the physics and engineering of carbon-based semiconductors.