Since the first artificial satellite was launched in 1957, we have been sending more and more objects into orbit every year. With each launch, items are left behind in space after the functional satellite is delivered. These objects are collectively known as space debris, and range from old rocket motors and fuel tanks to fragments of metal from sacrificial assemblies holding rocket stages together. The space above Earth is full of this debris, which is starting to pose a real hazard to operational satellites.1 An object in orbit has a velocity on the order of kilometers per second, and therefore even something the size of a small bolt could be fatal to the delicate hardware of an operational satellite.

We can track large pieces of space debris easily from the ground either optically or using radar.2 Derelict satellites and old rocket bodies are objects that we know, catalog, and track regularly. If there is any danger of one of these colliding with a functional satellite, tracking stations will receive that information and pass it to the satellite operator, who can judge whether to alter their system's orbit to avoid a collision. Radar tracking works very well in this situation, providing orbital accuracy to within a few kilometers.

However, there are many more objects of less than 1m in size that are difficult to track with radar. To address this problem we use lidar, an active optical tracking technique in which we propagate a laser through a ground-based telescope onto the sky.3 The telescope tracks an object along its trajectory and measures the laser pulse's round-trip time to determine the target range. With this data we can determine precisely the orbit of each object, enabling us to assemble a catalog and regularly survey the objects. This system is currently limited to tracking items down to approximately 10cm in size in the range 400–1500km, and larger objects at around 2500km. The return signal follows an A/r4 relationship, where the object cross-section area is A, and r is the distance to the object. Increased range for operational systems would improve the catalogue of known objects and increase safety for operational satellites.

We have developed an adaptive optics system to increase the range of lidar and reduce the minimum target size.4 For this we use an artificial star, created by illuminating a portion of the atmosphere with a laser, to measure turbulence (see Figure 1). At tracking rates of up to 1 degree per second, the artificial beacon must be quite strong, and the information from it processed very fast to keep up with the rate of change of sky zones needing turbulence correction. This is a major challenge for the project. A deformable mirror corrects this turbulence, enabling us to better focus the laser beam on the target in orbit, increasing the maximum range and decreasing the minimum target size. 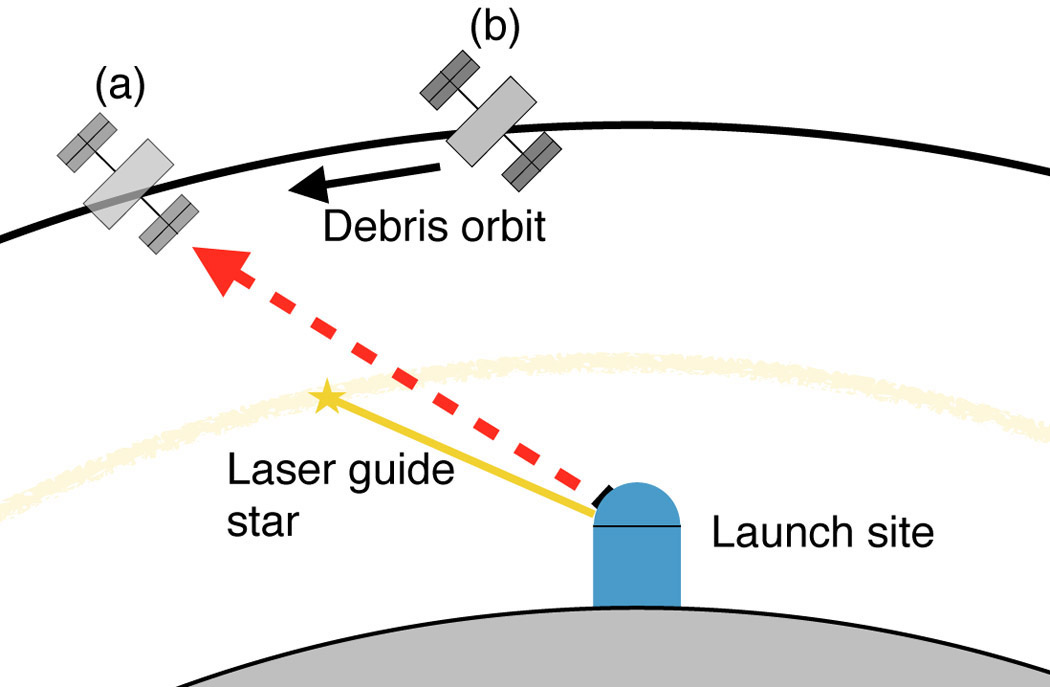 Figure 1. A ground-based telescope launches an IR laser ahead of a target (a) such that the object (b) intersects the beam. A laser guide star in a layer of sodium in the atmosphere, acts as a reference beacon to measure the atmospheric turbulence.

We are currently commissioning this project as an astronomical adaptive optics system while we await completion of the laser-guide-star component. We anticipate obtaining initial results from the debris tracking system in the first half of 2015.

Using ground-based active optical tracking is a first step to tackling the problem of space debris. Adaptive optics plays a large part in this system by removing the atmospheric turbulence, significantly improving sensitivity. In future work, we plan to use a similar ground-based telescope and laser system to influence the orbit of small debris objects. The laser would not blast items out of orbit, rather it would gently push them out of the way of valuable assets to prevent a collision. Such a system would require the combination of a very high power laser and adaptive optics.