Autostereoscopic displays, which produce an illusion of depth in images without requiring the viewer to wear special glasses, have long been regarded as a desirable improvement to existing 2D display technology for entertainment, industry, and research. Ideally, a 3D viewing system would be compatible with current liquid crystal displays (LCDs). Existing systems include parallax barrier and lenticular techniques, which allow each eye to see different images, creating a sense of depth.1–3 However, these suffer from technical challenges, including reduced resolution, limited viewing angle, and unsatisfactory crosstalk.4

Various approaches have been tried to improve autostereoscopic displays.5–7 Directional backlight solutions are able to preserve full image resolution, but their viewing angles or volumes remain relatively limited. Low crosstalk can also be achieved for a given viewing point, but it remains a challenge to keep it low (less than 5%) across the whole viewing zone.

Our display consists of control modules, backlight modules, a lens array, and LCD panel, where the green and blue lightpaths represent light intended for the viewer's right and left eyes, respectively (see Figure 1). LCDs do not produce light themselves, and thus are illuminated from behind (backlit) by modules consisting of white LEDs. The orientation of the liquid crystals determines whether light from the LEDs is transmitted or blocked by the LCDs, and the orientation is controlled by applying an electric field. An array of Fresnel lenses (compact lenses made up of a series of slanted surfaces) in front of the LCD panel orients the light within the viewing zone. We have used an adaptive optical optimization algorithm to design freeform surface backlight (FFSB) modules and a lens array with hybrid spatial-temporal control of the LEDs and LCDs to achieve an autostereoscopic LCD display with full high-definition (1920×1080) resolution, low crosstalk, and wide viewing angle (see Figure 2).8–10 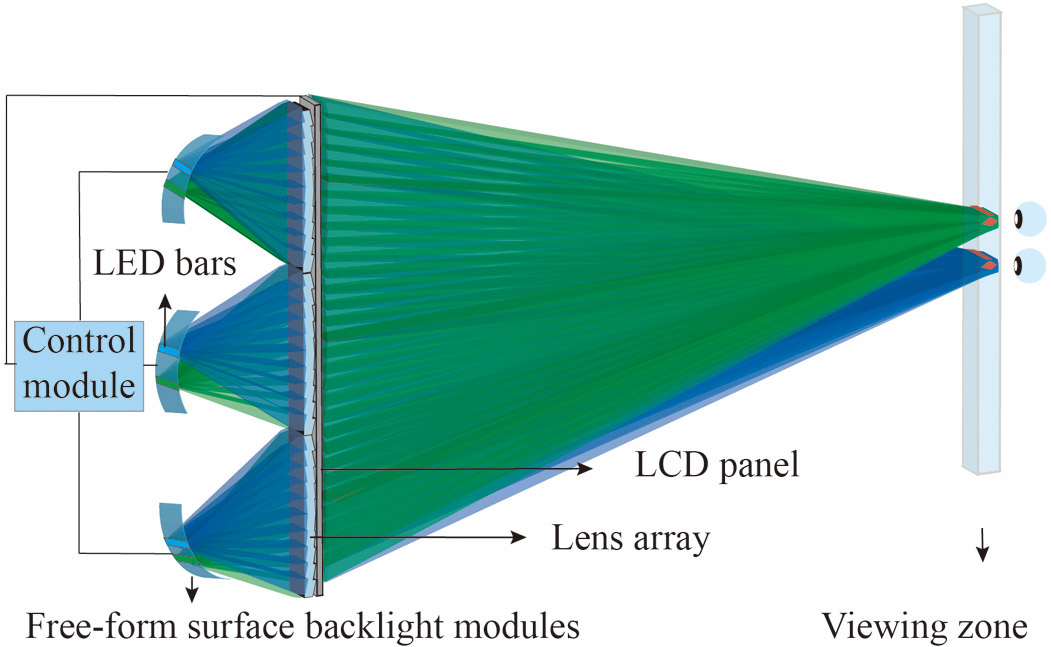 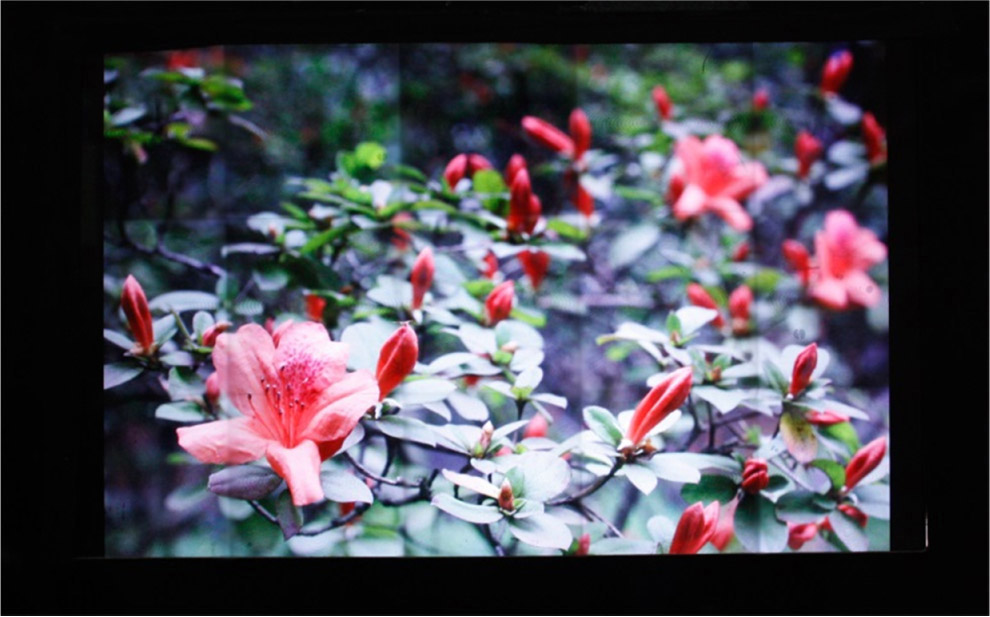 Figure 2. A high-quality autostereoscopic display. Crosstalk would be visible as a moiré pattern in the image. Without it the 3D image appears as sharp as a 2D image.

We measured the display effect in two ways. First, we wanted to increase the uniformity of the luminance, which is a new measure (figure of merit) for autostereoscopic displays. Second, for our optical design target, rather than using the conventional measure of crosstalk (which quantifies leakage of the erroneous image to the designated channel), we adopted a new crosstalk measure of the ratio of the total signal power to leakage. The test procedure is the same, but we need to process the measured data further. This is a little complicated, but it is a better test.

The adaptive optical optimization algorithm controls directional transmission of full-resolution images for each eye by turning sections of the LED bars (made up of an LED array and diffuser) on and off in time with the refreshing of the LCD image.

We also applied a dynamic synchronized backlight technique (that accurately controls when the LED bars are lit) that further reduces the temporal crosstalk (see Figure 3).5 A control module based on integrated circuits (ICs) is applied to achieve a finer temporal control of the backlight module, so that the backlight array is in phase with the scanning of the LCD screen. The LED bars are triggered by the synchronizing signal from the LCD and selected to be turned on or off. By optimizing the gating time of the LED bars, the temporal crosstalk can be suppressed to a desirable level. 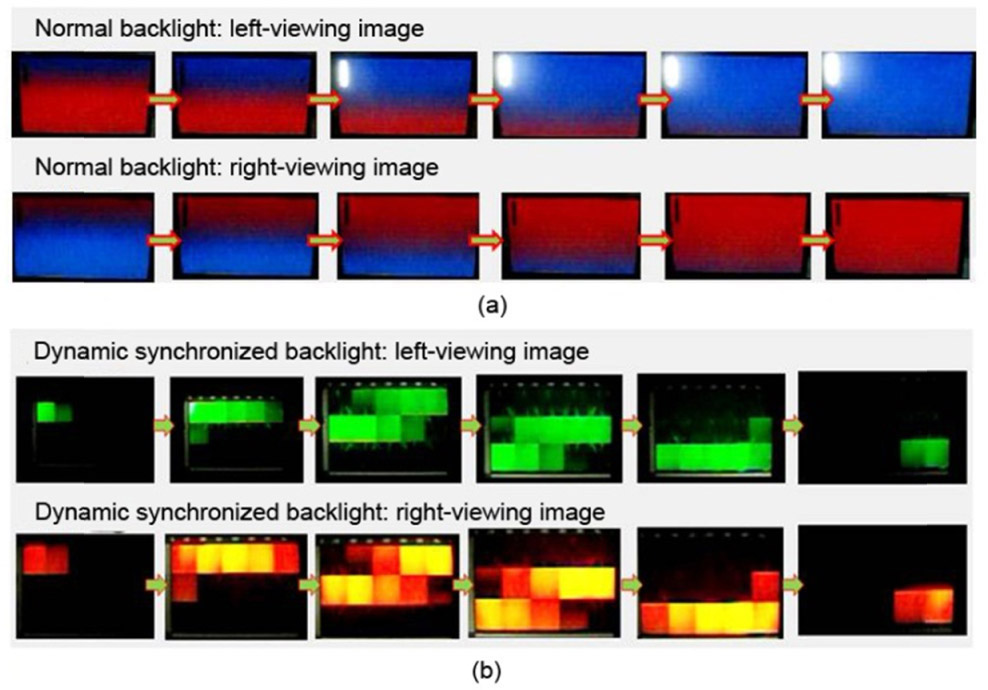 Figure 3. (a) Normal backlight with all units on. (b) Dynamic synchronized backlight technique with finer temporal control.5 Arrows indicate the flow of time from left to right.

To keep the crosstalk from adjacent channels less than 5% across the whole viewing angle, we used a novel ‘free-form surface backlight’ (FFSB), designed by the adaptive optical optimization algorithm. With the FFSB, the viewing angle can be extended to about ±23° (see Figure 4).10 At the extreme angle of 23°, the crosstalk is much smaller than that from a conventional planar backlight (PB) system. For instance, the crosstalk at a viewing angle of +22.6° for the PB system is about 62%, but only about 4.5% for the FFSB system, which is a reduction of about 93%. Within the viewing zone, the 3D image is visible from distinct locations, but these viewing locations can be adjusted and extended by adjusting the LED array controls, and face tracking may additionally make it possible to automate this process. 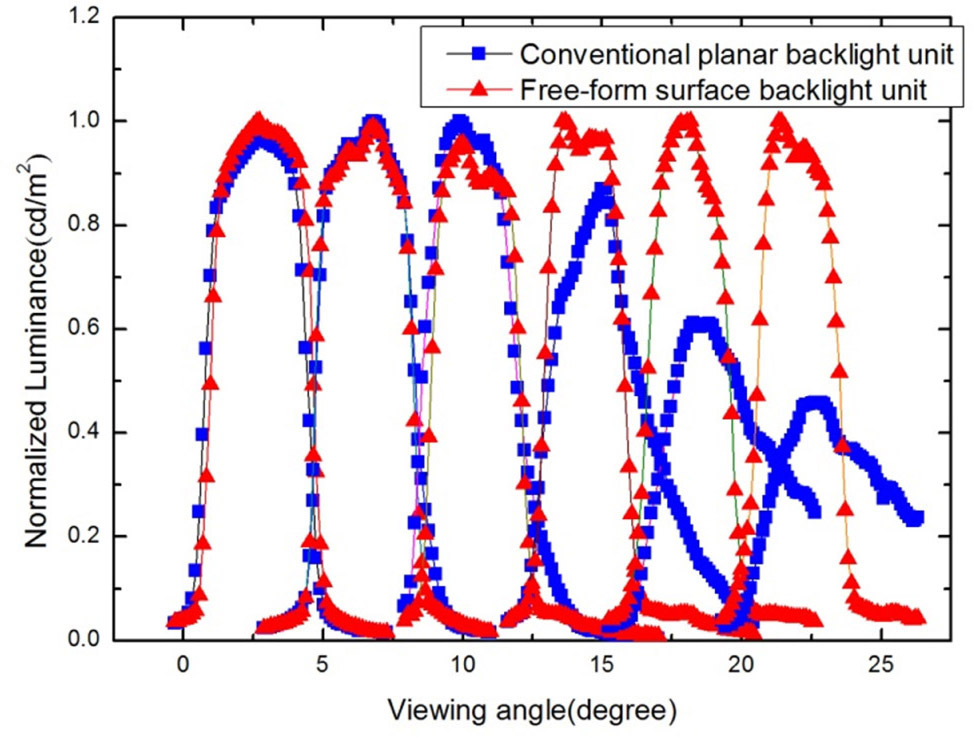 Combining optimally shaped FFSB units and hybrid spatial-temporal control of refreshing the LED and LCD made it possible for us to achieve crosstalk as low as 2.41%, which is very close to that of a polarizer glass-assisted 3D display system. In other work, we have achieved crosstalk as low as 1%, which is even lower than a polarizer-glass-assisted system, but this has not yet been applied to a practical device.

In summary, we have designed and demonstrated a full-resolution, low-crosstalk, wide-viewing-angle, autostereoscopic display using an adaptive optical optimization algorithm and hybrid spatial-temporal control using an FFSB unit. In our system, 2D and 3D display compatibility is achieved without degradation in resolution. Full resolution for each viewing point is preserved at 1080P (1920×1080). This is the highest definition achieved with an autostereoscopic display to date. In contrast, the resolution of lenticular or barrier-based 3D systems decreases by a factor equal to the number of viewing points. Crosstalk from adjacent channels was reduced to less than 5% even at a wide viewing angle and as little as 2.4% for an optimized design. Furthermore, our proposed design is compatible with existing LCD technology and 3D movie formats. Table 1 gives details of performance, such as gamut (set of accurately represented colors) and color temperature. In addition, our approach can be scaled up or down from a mobile system to a large screen system without any reduction in panel resolution. We are now working to apply these approaches to a multi-user 4K (3840×2160) 3D television display.

Jianying Zhou is a full professor. He received a PhD in physics from Imperial College London (UK) in 1988. His current research interests include ultrafast optoelectronics, optical imaging recovery, super-resolution optical imaging, and optics in virtual reality and in 3D display technology.