During a supernova event, a massive star explodes, having exhausted its readily available supply of fuel for nuclear fusion. The explosion releases newly synthesized heavier elements from inside the stellar core, making these available to the cosmos for subsequent generations of star (and planet) formation. However, while these events put out more light than their entire host galaxy for a few days, optical surveys miss up to half of the supernovae predicted to be occurring.1 The problem is even worse when galaxies collide in what are called Luminous IR Galaxies (LIRGs), which then form stars at a prodigious rate, yet appear to yield hardly any supernovae.

LIRGs are sufficiently cocooned in dust that their light is all but extinguished, like being in a smoke-filled room. As with firefighters, we can switch to using IR cameras on our telescope to see the heat radiation from the supernova, which can penetrate the dust more easily. However, that still is not enough, as LIRGs are clumpy and also far away, making it challenging to spot a new supernova in the act. Using the Hubble Space Telescope (HST) we can overcome the blurring effect of Earth's atmosphere. But getting time on HST to observe a LIRG once is hard enough, let alone observing a LIRG every few months to see if a supernova has occurred.

Fortunately, we can now produce IR images from the ground that are as sharp as those from HST, using the technique of laser-guide-star adaptive optics. With a laser more than 1000× brighter than a laser pointer, we create an artificial star high in the atmosphere (see Figure 1). By adjusting a small, flexible mirror inside the telescope hundreds of times a second we restore the blurred laser image to a crisp point, and in so doing sharpen up the view of any astronomical object in the background. 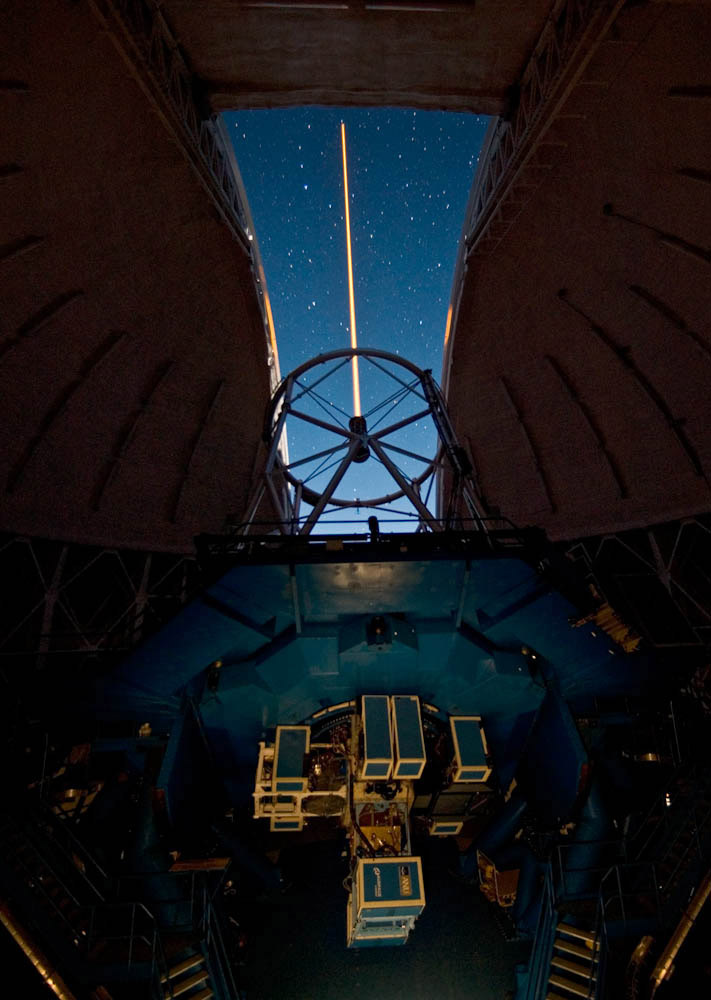 Figure 1. Laser-guide-star propagation at the Gemini North 8m telescope in Hawaii, which helps to sharpen the view for instruments attached to the back of the telescope. (Reprinted with permission from the Gemini Observatory/AURA.)

Between 2008 and 2011 we used such a system on the Gemini North 8m telescope on Mauna Kea in Hawaii to monitor eight LIRGs for supernovae. We found six supernovae, four of which had not been seen by any other telescope. Figure 2 shows not one, but two supernovae found within the same LIRG IC 883 within the space of one year.2By measuring just how much supernova light has been absorbed by dust, we calculate that most, if not all, of the ‘ missing’ supernovae could be hidden in dusty LIRGs. To do this, we make follow-up observations of the candidate supernova at monthly intervals and build up light curves (the varying brightness over time) in three different near-IR passbands: J (centered on 1.25μm), H (1.65μm), and K (2.2μm). We have good template light curves for more nearby supernovae that we observe to have suffered almost no absorption due to dust. The effect of dust is to make the peak brightness in each passband fainter than it would have been, and to spread the J, H, and K light curves further apart in brightness. We use a fitting technique that simultaneously matches the date when that peak occurs, the peak in each band, and the spread between them to our (sparse) data, from which we can derive the extinction in magnitudes on a logarithmic scale. Every 1 magnitude of extinction in the K band corresponds to 10 magnitudes of extinction at optical wavelengths, so that we can see supernovae in the IR that might never be seen at optical wavelengths.

The same images we took to search for supernovae have also proved invaluable in helping us understand what happens when galaxies collide. One LIRG turned out to be three galaxies merging,3 while another has spiral arms that appear to rotate the wrong way around!4

The future for laser-guide-star adaptive optics includes more powerful lasers and IR cameras, enabling us to see sharp images over larger fields of view than ever before. Our plan is to ramp up our earlier program at Gemini North to a more ambitious one at the Gemini South telescope in Chile. Our work to date has used a classical laser-guide-star adaptive optics system, which provides excellent image correction at the field center where the laser guide star is projected, but progressively poorer correction toward the edge of the field where the atmospheric turbulence differs. Gemini South now has the world's only multiple laser-guide-star system, meaning we can achieve superb images over much larger fields of view. As a result, we anticipate better image subtraction and fewer supernovae being missed in crowded regions of the LIRG host galaxies.

This work is based on observations obtained at the Gemini Observatory, which is operated by the Association of Universities for Research in Astronomy Inc. (AURA) under a cooperative agreement with the National Science Foundation on behalf of the Gemini partnership: the National Science Foundation (US); the National Research Council (Canada); CONICYT (Chile); the Australian Research Council (Australia); Ministério da Ciência, Tecnologia e Inovação (Brazil); and Ministerio de Ciencia, Tecnología e Innovación Productiva (Argentina).