Our system, so-called ferroelectric columnar liquid crystal (FCLC), is based on a columnar hexagonal liquid crystalline phase, a 2D array of hexagonally packed cylindrical columns, with a hydrogen-bonded amide (-CONH-) network along the columnar axis: see Figure 1(a). This ensures a core-shell architecture, where a large paraffinic shell wraps around a core domain accommodating an array of cyano (-CN-) groups. The cyano groups can be ‘pushed up,’ such that each unit assembly gains an umbrella-like shape and hence a dipole moment along the columnar axis from the cyano groups: see Figure 1(b). 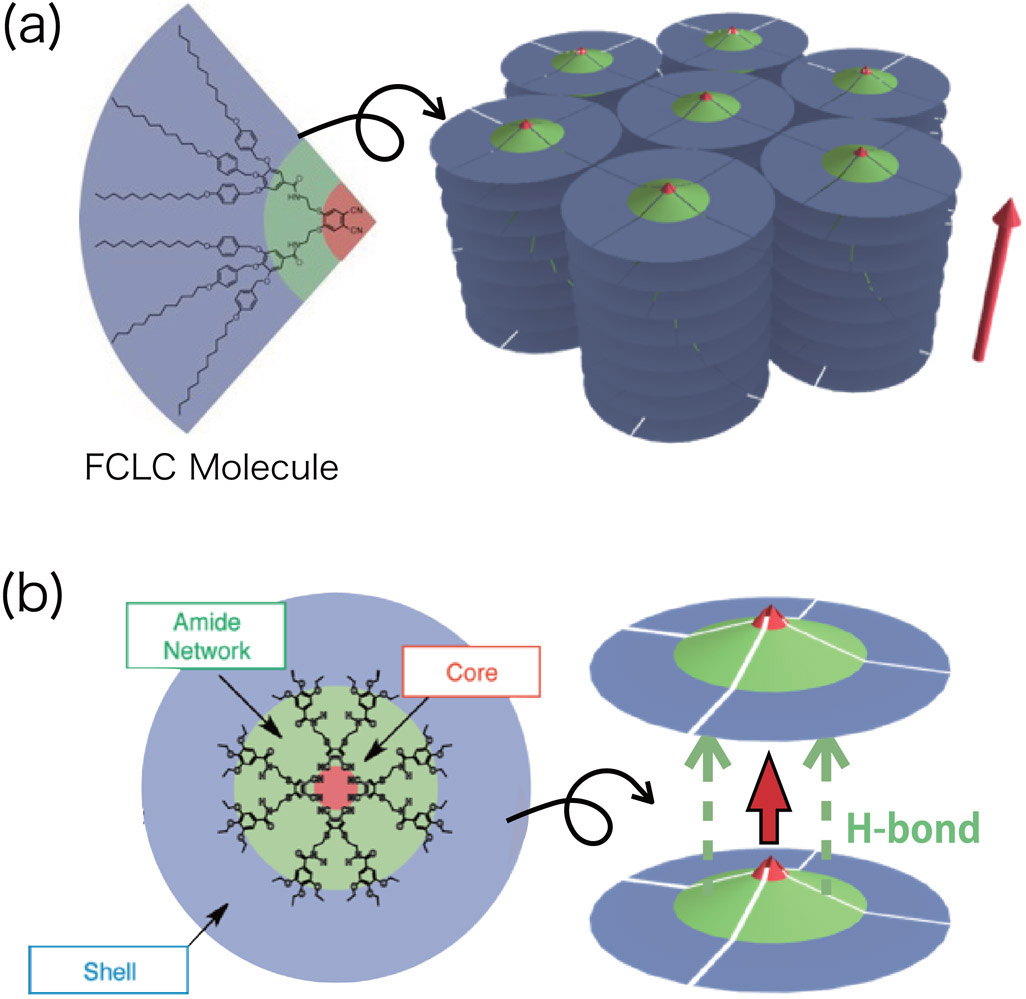 Figure 1. (a) Molecular and phase structures of ferroelectric columnar liquid crystal (FCLC). (b) The core-shell architecture and a plausible model of hydrogen-bonded unit assemblies.

When an electric field is applied, the liquid crystal self-organizes into large uniform ferroelectric domains in wet-processed films or liquid crystalline bulks: see Figure 2 for examples of ferroelectric films after application of an electric field.4The core-shell model suggests two plausible polarization stabilization mechanisms. The first involves the cyano groups located at the center of the umbrellas, and the second involves the hydrogen bond along the columns between the amide networks. In the former case, the ferroelectric switching dynamics may be a turning inside-out of the umbrellas. On the other hand, if the amide networks stabilize the polarization, the switching dynamics could be simply a rearrangement of hydrogen bonds from the upper molecule to the lower molecule, or vice versa. However, this is speculation based on the molecular and phase structures. We have experimentally investigated the polarization stabilization mechanisms using nonlinear optical (NLO) techniques.

Figure 2. Ferroelectric films after application of an electric field. (a) A drop-cast FCLC thin film. (b) A heat-pressed FCLC freestanding film fixed in the round window on the glass substrate.

Optical second-harmonic generation (SHG), a second-order NLO technique, has been extensively used as a main probe to confirm ferroelectricity in organic ferroelectrics. SHG can be observed only in non-centrosymmetric states (including ferroelectric systems), except for some special cases.3–5Such an optical experiment allows us to detect polar switching without ionic noise, which is often inevitable in electrical measurements. In addition, recent progress in image sensors has made it possible to detect SHG signals as an image. We have recently visualized ferroelectric switching in FCLC with a new technique we call interferometric SHG microscopy (ISHM): see Figure 3.4 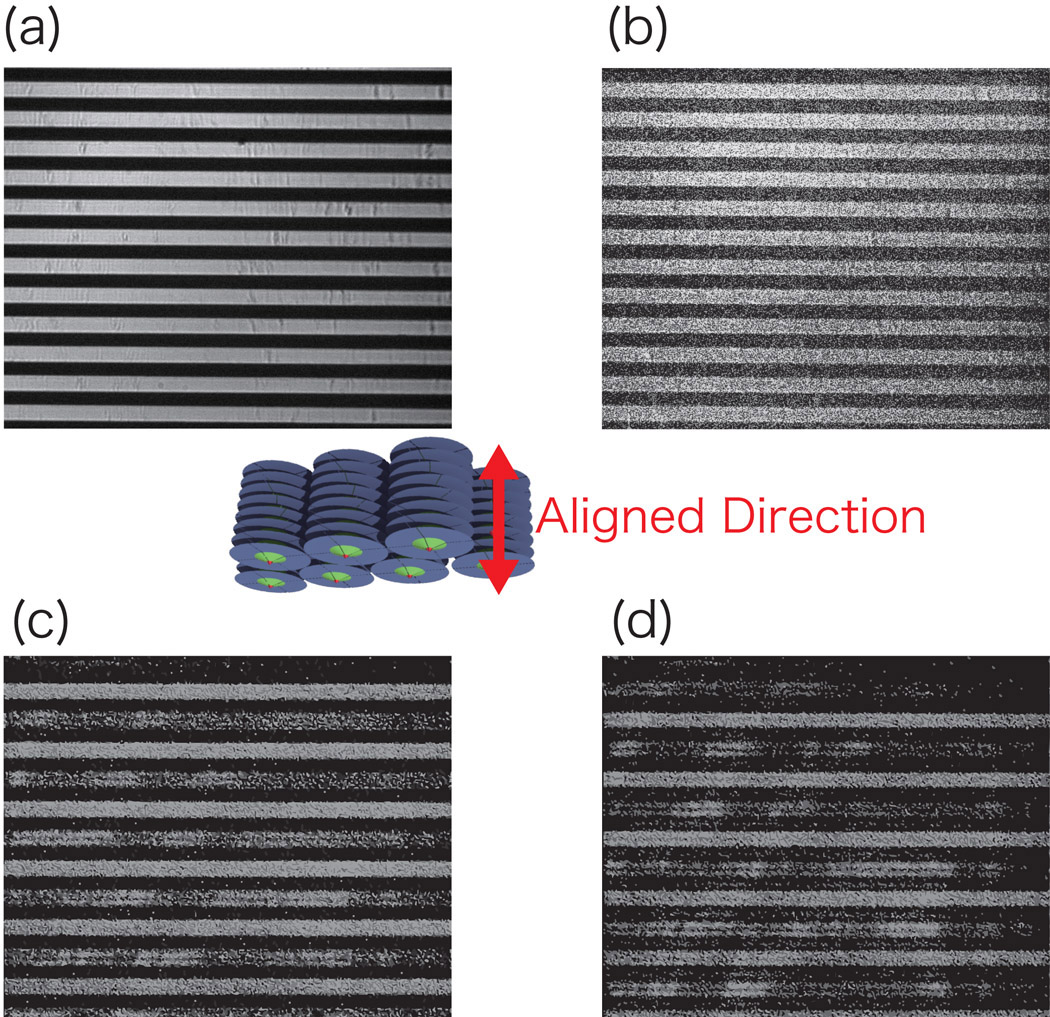 Figure 3. (a) A polarization micrograph of a wet-processed FCLC thin film (bright regions) aligned on stripe electrodes (dark regions). The dark stripes are alternately anodes and cathodes. We reverse the polarization in the FCLC films by reversing the applied voltage across the electrodes. (b) The corresponding second-harmonic generation (SHG) micrograph. (c) Interferometric SHG microscopy (ISHM) image showing brighter and darker FCLC bands from constructive and destructive interference, respectively, of SHG optical waves. (d) The bands are reversed on polarization reversal. The pattern of interference shows that the phase difference between light from the bands is π, which is caused by a reversal in polarization.

As mentioned above, the polarization stabilization mechanism and the ferroelectric switching dynamics in the FCLC system are not yet clear. For future molecular design, particularly with practical applications in mind, these physical mechanisms must be understood. As a second-order NLO technique (like SHG), infrared-visible sum-frequency generation spectroscopy (SFG) shares the advantages of SHG. However, using light from a tunable IR laser as one of the fundamental beams, the SFG signal is much enhanced when resonance is achieved. For this reason, SFG is frequently used to eliminate unnecessary information from the centrosymmetric bulk when sensing symmetry-broken states at interfaces and surfaces.6 Despite these advantages, SFG has until now been little used to investigate molecular ferroelectrics. We used SFG to probe the non-centrosymmetric bulk to identify the source of the ferroelectricity of FCLC.4

Figure 4 compares SFG signals from a spin-cast film of the FCLC sample before, during, and after electric field application at 120°C. Initially, the sample film showed a very weak signal from the background. However, by applying an electric field, distinct SFG peaks immediately appeared at 2150–2250cm−1 and 1500–1600cm−1, corresponding to the cyano and the carbonyl (in amide) stretching modes, respectively. Even after turning off the electric field, both induced SFG signals have persisted for several months.

This result clearly shows that the cyano and amide groups both stabilize the spontaneous polarization, i.e., are the origin of the ferroelectricity in this system (although they would be expected to cause completely different switching dynamics as described above). In addition, this also implies that there is some kind of stabilization mechanism between the two polarizations that has not yet been clarified. However, transient SFG measurements and comparison with non-ferroelectric homologues will reveal the difference in responses of these two dynamical processes. At any rate, there is no doubt that these results are important for future molecular design and that SFG is a very useful probe to investigate the dynamics of molecular ferroelectrics.

In summary, FCLC, the recently discovered organic molecular ferroelectric, is a promising material for wet-processable/paintable ferroelectrics with applications in organic electronic devices such as unconventional high-density memories, field-effect transistors, and photovoltaics. SHG and SFG, two NLO techniques, have confirmed its ferroelectric switching and partially revealed the molecular switching dynamics. In future, we will further investigate the detailed molecular switching mechanism and dynamics using these techniques.