The unique capabilities of transistors1 to both control and amplify an electric current make them a cornerstone of modern electronic systems. They are the main building blocks of electronic logic gates and information-processing devices. Surprisingly, it has been found that the transistor principle can be manipulated for the flow of radiative heat, as well as for the flow of electrons, which enables novel transistor devices. These proposed devices offer a vast increase in speed because the controlled heat radiation travels at the speed of light.

As a consequence of the second law of thermodynamics, heat flows from hot regions to cold ones. In solids, this exchange of energy is achieved by conduction, i.e., via atomic lattice vibrations (phonons). In liquids and gases, heat is transported via convection, i.e., the collective motion of fluid or gas particles. Thermal radiation is an additional mechanism of heat flow, where radiative transfer is due to an exchange of thermal photons. Thermal radiation does not require contact and occurs even when two regions are separated by a vacuum.

We have recently shown that the realization of thermal transistors may be possible with a new design.2 Heat flux exchanged via conduction, convection, and radiation usually increases with temperature difference. If the hot and cold regions are separated by a material that has a negative differential thermal resistance, however, a drop in the temperature difference can cause an increase in the exchanged flux (the second law of thermodynamics is not violated because there is still net flux from hot to cold). This property is key for the production of thermal transistors that can switch, modulate, and amplify the heat flux received by the cold body.

Our new thermal transistor design (see Figure 1) therefore includes a material that undergoes a phase transition at about room temperature. We have based our device on phononics transistors that were first built in 2006.3, 4 These were fabricated by adequately tailoring the thermal conductivity of the solid elements that were in direct contact. This technology, however, was intrinsically limited by the speed of sound in solids. 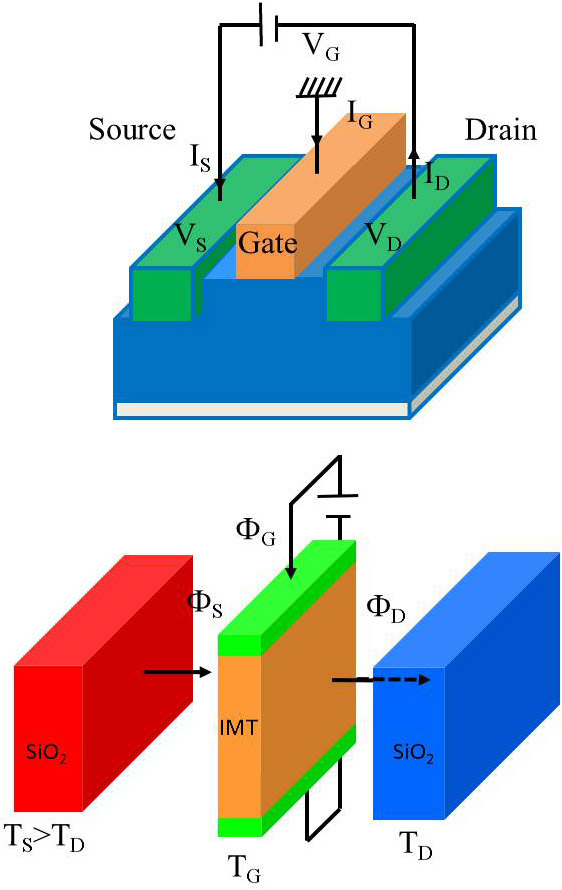 Figure 1. Top: A classical field-effect transistor is a device with three terminals, the source (S), gate (G), and drain (D). The gate is used to actively control (by applying a voltage, V, on it) the apparent electric conductivity of the channel between the source and the drain. Bottom: A radiative thermal transistor design. A membrane of an insulating-metal transition material (IMT) acts as the gate between two silica (SiO2) thermal reservoirs (source and drain). The temperature (TG) of the gate is in equilibrium between the temperatures of the source and drain (TSand TD). ΦG: Heat flux supplied to the gate. ΦDand φS: Heat flux received by the drain and source, respectively. I: Current.

The design of our radiative thermal transistor is simple. It consists of three elementary blocks that, by analogy with conventional field-effect transistors (see Figure 1), we call the source (hot body), drain (cold body), and gate. We use a nanolayer membrane of an insulating-metal transition material as the gate between the two thermal reservoirs, and silica for the source and drain.5 This transistor can operate with thermal photons that travel about 300,000 times faster than phonons. It can be operated in either the far-field (i.e., with large separation distances compared with the thermal wavelength of about 10μm at 300K), or near-field (i.e., sub-wavelength gaps) regimes.

We use a vanadium oxide membrane7,8 for the gate material in our thermal transistor. This material undergoes a phase change at 340K. At temperatures below this critical temperature it displays insulating optical behavior, and at higher temperatures it exhibits conducting behavior. We can externally modulate the temperature of the gate using electrodes or Peltier elements. Our radiative transistor can therefore switch heat flow between the two reservoirs on and off, and be used to amplify the heat flow, just like ordinary electronic field-effect transistors (see Figure 2). 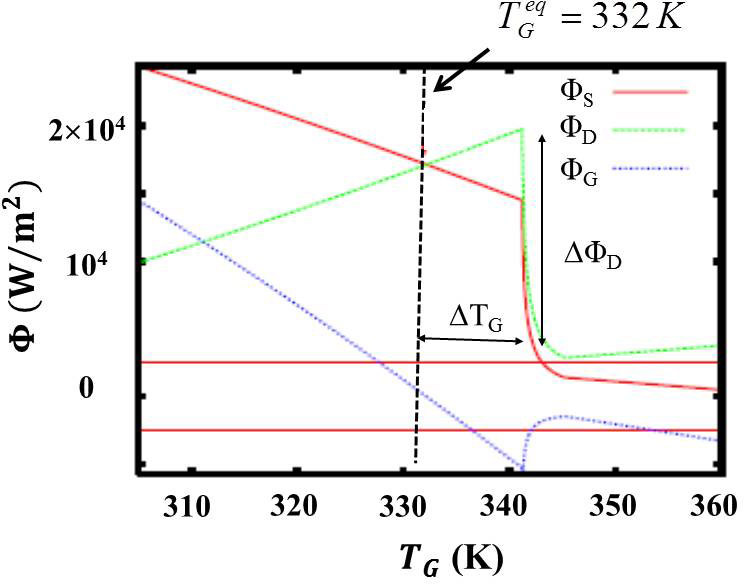 Figure 2. Heat flux (Φ) exchanged inside a thermal transistor that has a vanadium dioxide (VO2) gate, and a silica source and drain. The critical temperature of VO2is 340K, when it undergoes a phase transition. When the equilibrium temperature of the gate (TeqG) is just below this critical temperature, a small amount of heat applied to the gate therefore induces a strong switching of the source (ΦS) and drain (ΦD) heat fluxes. Different functions (thermal switching, thermal modulation, and thermal amplification) can be realized by externally changing the heat flux supplied to the gate (ΦG). These measurements were obtained with a 50nm-thick gate placed 100nm from two silica6samples that were maintained at 360 and 300K.

We have designed a new thermal transistor that controls heat flow with a phase-change material. This novel technology offers numerous possibilities for active thermal management on macro- to nanoscales. We now plan to develop new devices that create memory by storing and controlling the release of thermal energy. We also hope to use the transistor design as a building block in microelectromechanical technologies for heat engines. These would allow the generation of mechanical work from heat by coupling microresonators to transistors.

The authors are grateful for the support of the German Academic Exchange Service (DAAD) and the Hubert Curien Procope program (project 55923991).

Philippe Ben-Abdallah is a senior researcher and head of the thermoplasmonic team.