Organometal trihalide perovskites are emerging as a new generation of photovoltaic materials. They are abundant in nature and have rapidly increasing power conversion efficiencies (PCE) of above 15% in common hybrid (mixed organic/inorganic) thin-film-based solar cells.1–3 Up to now, perovskite films have been formed by film deposition approaches such as spin-coating, sequential deposition of the inorganic and organic precursor, and co-evaporation of the precursors.1, 2 Low-temperature solution processes are among the simplest ways to fabricate planar low-cost photovoltaic devices. However, perovskite crystallizes very rapidly, so it is very challenging to form uniform, continuous, and leakage-free perovskite films by solution methods.2 We developed two simple and effective low-temperature solution processes to fabricate high-efficiency perovskite devices (see Figure 1). 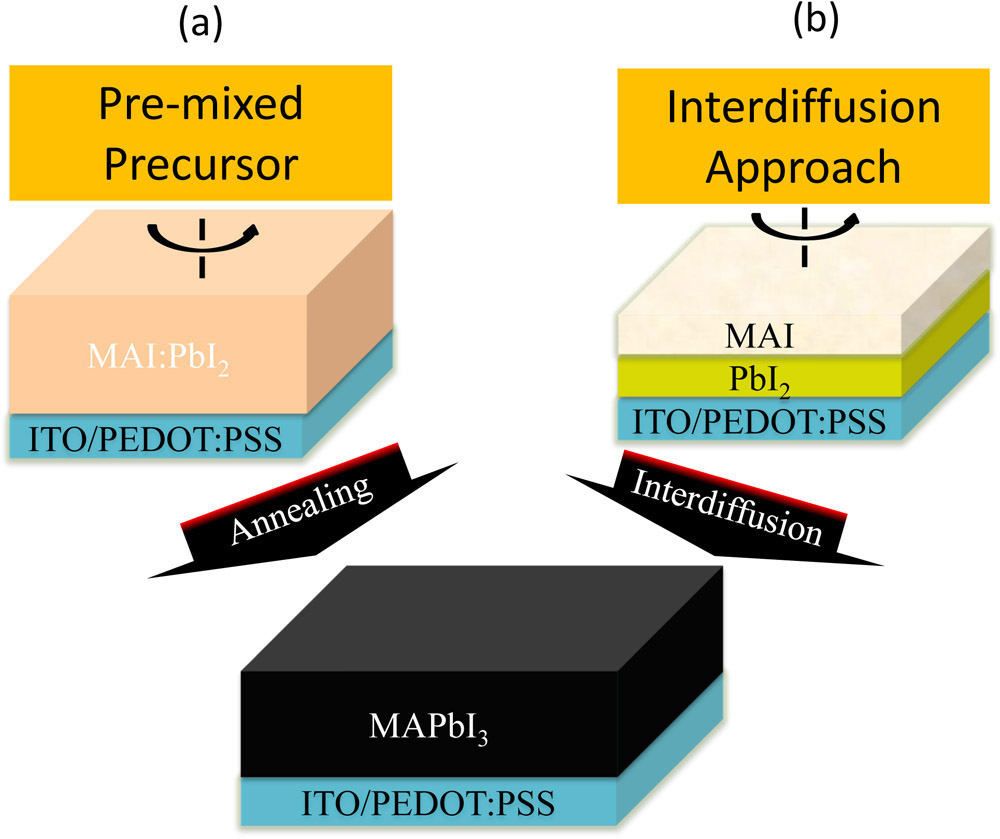 In the first approach, we studied the influence of the ratio of the precursors methylammonium iodide (CH3NH3I) and lead iodide (PbI2) in a premixed solution.3 We found that using a non-stoichiometric precursor solution (i.e., not in a simple ratio) was critical to forming stoichiometric (i.e., in a simple ratio) perovskite films. The compositions of the spun perovskite films were very sensitive to the substrate surface, and could be very different from those of the precursor solutions. We varied the composition of the precursor solution, and found a PbI2/CH3NH3X molar ratio of 0.6–0.7 gave the best surface morphology and electronic properties, such as doping concentration.

We used a planar heterojunction device structure of ITO/PEDOT:PSS/(CH3NH3I)/PCBM or ICBA/C60/BCP/aluminum, where ITO is a substrate of indium tin oxide, PEDOT:PSS is an electron-donating transparent conductive polymer, PCBM and ICBA are fullerene-derived electron acceptors, C60 is buckminsterfullerene (a spherical fullerene molecule), and BCP is 2,9-dimethyl-4,7-diphenyl-1,10-phenanthroline, an electron-transporting but hole-blocking layer.

Put simply, when a photon is absorbed by a semiconductor layer in a photovoltaic device, its energy is gained by an electron, leaving behind a positively charged ‘hole.’ The electron and hole carry their charge to different electrodes, creating an electric current. Charge traps prevent this current from flowing and so reduce the device efficiency. However, it is possible to ‘passivate’ a charge trap by filling it with electrons.

Without any fullerene layer, we found devices had a relatively large charge trap density (number of states per unit energy). Remarkably, we found the double fullerene layers (unique to our device and made up of a spun PCBM or ICBA layer under a thermally evaporated C60 layer) dramatically reduced leakage current (undesired current taking an unwanted path) by forming a Schottky junction (a rectifying junction, generally formed between a metal and a semiconductor) with the PEDOT:PSS anode. The double fullerene layers passivate charge traps in perovskite, increasing the device efficiency. We found most of the charge trap states in the perovskite devices were filled, mostly likely by transferred electrons from PCBM or C60. The charge trap density was reduced by two orders magnitude, significantly improving the transport and collection of photogenerated charges, which in turn improved the device efficiency.

We noticed that C60 and PCBM have different but complementary abilities to passivate charge trap energy bands with different trap energy depth. C60 and PCBM cooperate with each other well, with PCBM passivating shallow charge traps and C60 passivating deep charge traps. We achieved a fill factor (ratio of maximum power output with the product of the open-circuit voltage and short-circuit current) of up to a record 80.1%, in our optimized devices.

We also developed a new method to form continuous, compact iodine perovskite films by the interdiffusion of spin-coated stacking layers of PbI2 and CH3NH3I instead of making films from a blend precursor solution.4 We first obtained a pinhole-free and conformal (i.e., with a matching shape) PbI2 layer by spinning a supersaturated hot solution of PbI2 on PEDOT:PSS surface: see Figure 1(b). Since PbI2 has relatively low solubility in 2-propanol, we next spun a CH3NH3I solution in 2-propanol onto the PbI2 layer and annealed the PbI2/CH3NH3I bilayer films for various amounts of time to form perovskite films.

The low-temperature thermal annealing not only drove the interdiffusion of the precursor layers to form phase-pure perovskite but also promoted grain growth, yielding better crystallinity and larger grain size.5 Thermal annealing for up to two hours monotonically increased the mobility as measured by the Hall effect to 36cm2/Vs, short-circuit current, and fill factor, which correlates with the increased crystallinity and grain size, and also with the lower work function of the annealed perovskite. This is the first time perovskite photovoltaic devices' open-circuit voltage has been correlated with the perovskite work function, indicating perovskite photovoltaic works as thin film photovoltaics. Annealing for up to three hours (total) caused the perovskite to decompose and reduced the device efficiency.

The resulting high-quality perovskite films allowed the fabrication of high-performance, leakage-free photovoltaic devices (see Figure 2 for photocurrents). We achieved efficiencies of up to 12.2% and 15.4% for films made by blend precursor and interdiffusion, respectively, and fill factors of ∼80% for both preparation methods under one-sun illumination. The interdiffusion method results in high device yield, with above 14.5% efficiency for more than 85% of the devices.4 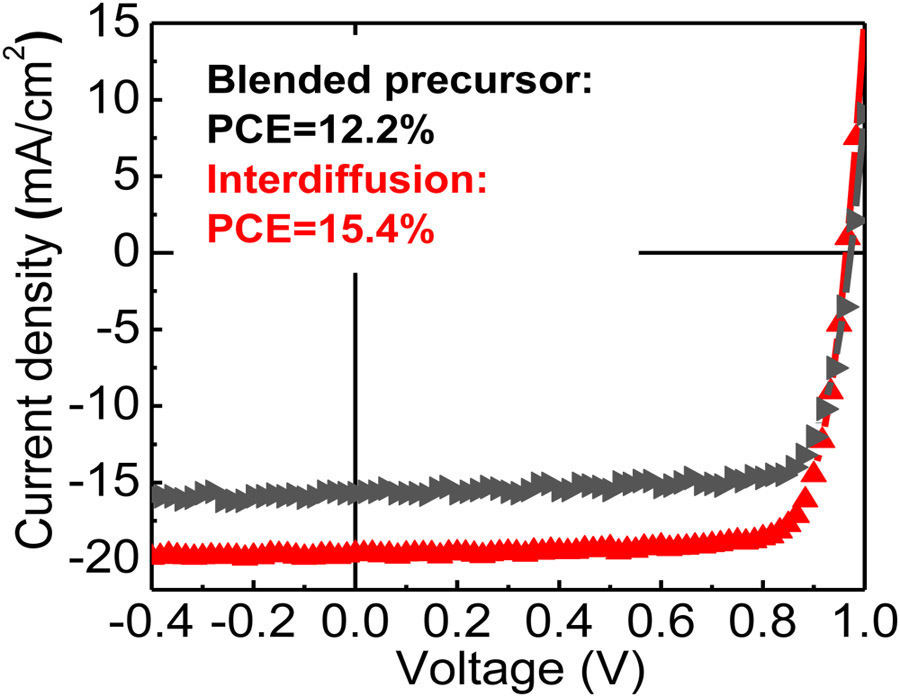 Figure 2. Photocurrents of the devices under standard ‘AM 1.5’ simulated illumination with perovskite films fabricated by the blended precursor solution and interdiffusion methods. PCE: Power conversion efficiency.

In summary, we developed two simple, low-temperature solution processes to fabricate high-efficiency perovskite solar cells at high yield, and demonstrated the importance of defect passivation in perovskite solar cells to achieve high efficiency. Despite the high performance we have already achieved using these new techniques, our understanding is still in its infancy. We are investigating the charge trap passivation mechanism and will now focus on understanding the influence of material crystallinity, composition, and impurity, doping, etc. on charge carrier dynamics and photovoltaic performance.

Jinsong Huang received a PhD in material science and engineering from the University of California–Los Angeles in 2007. After working for Agiltron Inc. as a research scientist for two years, he joined UNL as an assistant professor and was promoted to associate professor in 2014.