White light-emitting-diodes (WLEDs) perform well in many settings where solid-state light fittings with long lifetime, low power consumption, and high efficiency are required. However, high-power WLEDs suffer from high heat flux during operation. Improvements in chip structure and fabrication have solved the problem of heat degradation of chip materials, and now the challenge of high-power WLEDs is the reliability of their packaging.1–3

The most common LED packaging material is silicone, a polymer-based material, which has cerium-doped yttrium aluminum garnet (Ce3+:YAG) phosphors blended into it to emit white light. These operate as color conversion elements, which transfer parts of the blue light emitted from a gallium nitride (GaN) LED chip to yellow light. Unfortunately, the extremely high heat flux radiated from the GaN chip induces bond breakage in silicone.4 The sub-band defects consequently make silicone yellowish and decrease transmittance of silicone. The optical performance of WLED modules such as lumen and chromaticity thus deteriorates after a period of operation.5–7 To address this, we have developed novel glass-based phosphors with high thermal stability. 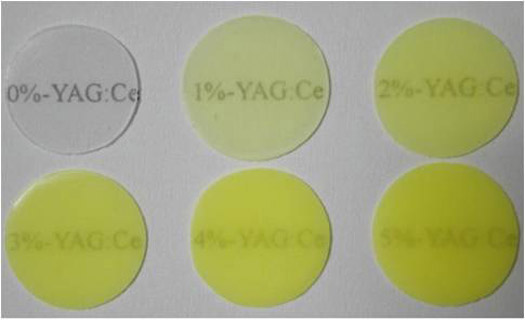 The emission spectra and the 1931 International Commission on Illumination (1931-CIE) color coordinates of the WLEDs using glass phosphors are shown in Figures 2 and 3, respectively. We attribute the 465nm band to the emission of the blue LED and the broad emission band around 560nm to fluorescence from the glass phosphors. We can satisfy the color requirements of commercial WLEDs—that the 1931-CIE color coordinates CIEx and CIEy are both 0.33—by using the 4wt% glass phosphor as the wavelength converter. 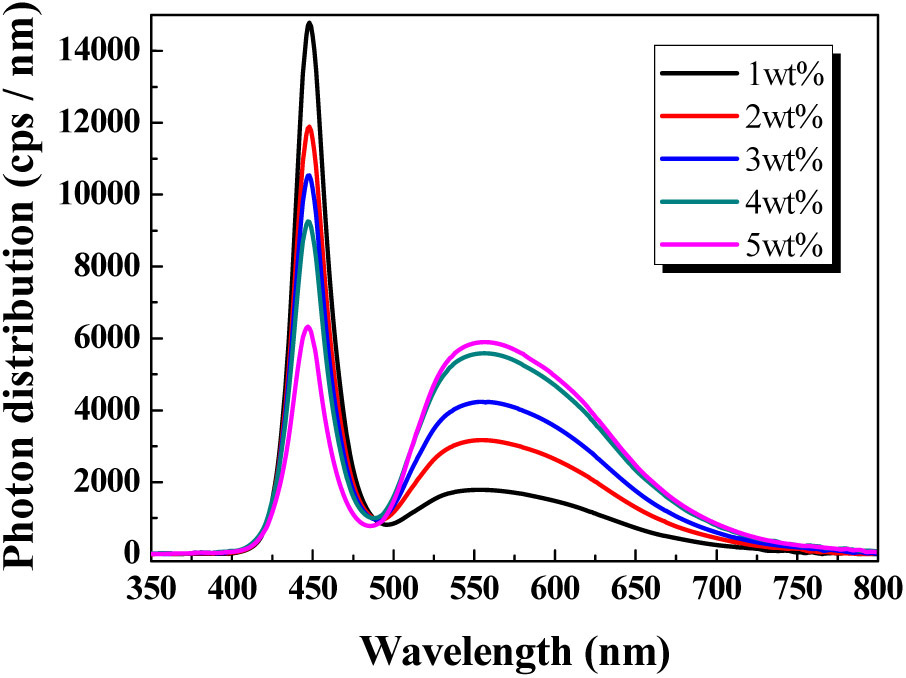 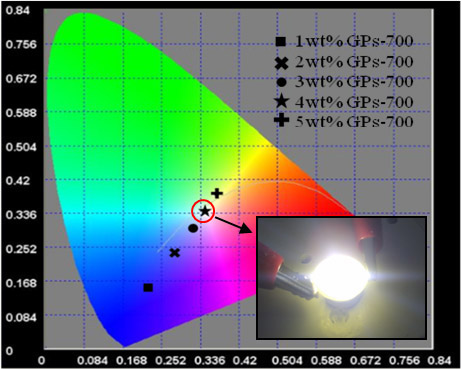 We prepared both glass phosphors (GPs) and silicone phosphors (SPs) to compare their thermal stability. Silicone phosphors were fabricated by baking the mixture of silicone and Ce3+:YAG phosphor crystals at 150°C. We chose the concentration of phosphor crystals in those samples to maintain CIEx, y = 0.33±0.005. We measured the luminosity, chromaticity, transmittance, and optical spectrum of the GPs and SPs before and after thermal aging to evaluate their thermal stability. For the GPs, we ran the thermal aging test at 150, 250, 350, and 450°C for 1008 hours. For the SPs, we ran the same test at only 150 and 250°C for 1008 hours.

In summary, we have demonstrated that GPs for WLEDs show ultra-high thermal stability. The lumen loss, chromaticity shift, and transmittance loss of the glass phosphors under thermal aging are dramatically less than those of SPs, and they exhibit far superior thermal stability. Our GPs may be a useful encapsulating material for WLEDs where highly reliable white solid-state lighting modules are required and where silicone simply cannot stand the heat, humidity, or other deteriorating factors. Our next step is to develop such high-power WLEDs.

Wood-Hi Cheng is a professor. His research interests are laser module packaging, reliability study of LEDs, and broadband fiber amplifiers. He is an SPIE Fellow and also a fellow of both the Optical Society (OSA) and the Institute of Electrical and Electronics Engineers.

Wei-Chih Cheng is a doctoral student. His research interests are the packaging and applications of high-power LED modules. He received an MS degree in electro-optical engineering, in 2006, from National Kaohsiung First University of Science and Technology, Taiwan, in 2006.