Optical microscopy and ultra-high-resolution nanoscopy play major roles in modern science and technology, with applications in optical imaging, optical data storage, and micro- and nanofabrication. Using a high numerical aperture objective lens (NA=1.4, oil immersion), we can focus light into a tight spot with an effective volume of less than 1μm3. By raster-scanning the focusing spot in 3D (scanning it line by line, or point by point), a confocal laser scanning microscope enables optical excitation of an object for its study or fabrication with submicrometer resolution. However, achieving this objective depends on many practical parameters.

There are two widely used excitation methods for photo-induced fabrication of submicrometric structures, namely one-photon and two-photon absorption (OPA, TPA): see Figure 1(a). Using a low-power laser source operating at a wavelength within the absorption band of the target, the OPA method has proved to be a very simple and low-cost technique. However, because of strong linear absorption, this approach is only convenient for thin films. In other words, the excitation is limited to the surface of thick samples, achieving only a 1D or 2D structure. In contrast, TPA excitation provides intrinsic 3D optical excitation, thanks to local nonlinear absorption and a quasi absence of linear absorption,1 which occurs only for the very high local intensity provided by tightly focusing a femtosecond laser. TPA has many potential applications, particularly in 3D imaging and 3D fabrication of submicrostructures.2–7 However, the technique requires expensive laser sources and delicate specialized optics. 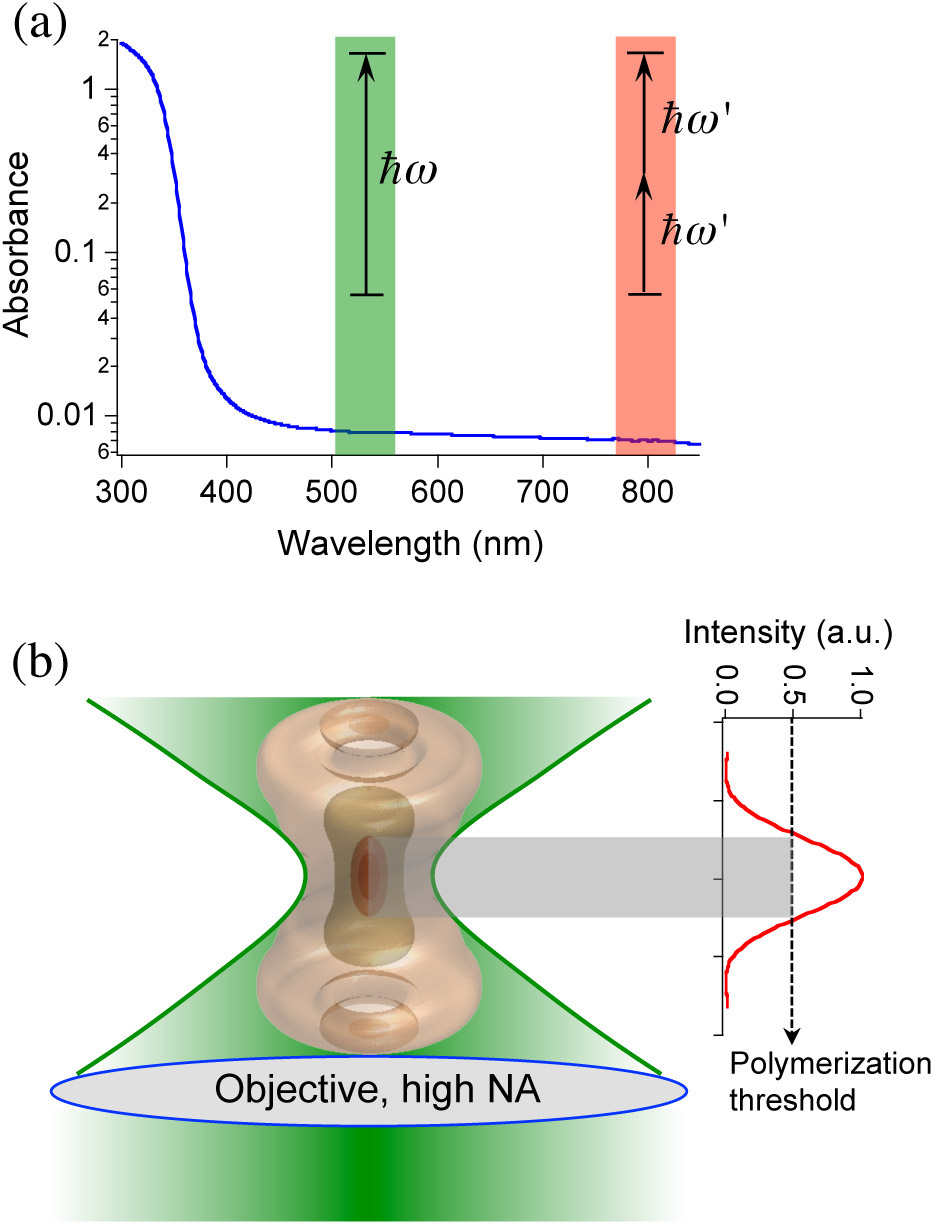 Figure 1. (a) Absorption spectrum of a commercial SU8 photoresist, plotted in logarithmic scale, and illustration of two typical absorption mechanisms: low one-photon absorption (ℏω, LOPA) and two-photon absorption (ℏω′ℏω′, TPA). (b) Simulation of intensity distribution at the focusing region of a high numerical aperture objective lens, taking into account the very low absorption effect of the photoresist. Above a certain dosage threshold the photopolymerization process is 100% completed, corresponding to a submicrometer focused volume. By moving the focusing spot in 3D space, it is possible to fabricate desired 3D submicrostructures. NA: Numerical aperture. a.u.: Arbitrary units.

In an optical microscope system, the propagation of light toward the focusing region is formally described by a nonlinear wave equation for the optical electric field. The intensity increases nonlinearly and reaches a maximum value at the focal plane: see Figure 1(b). For a high NA objective with a centimeter-size pupil, the light intensity at the focusing plane can be about 108 times higher than that at the entrance beam. Inside a material, the excitation efficiency and the resulting effect—the fluorescence or photopolymerization—is strongly dominant at the focusing region. However, in the material under study there also exists a linear absorption effect that reduces the light intensity in line with propagation. If the absorption is strong, the intensity then exponentially decreases along the propagation direction and may even vanish at the focusing region.

To overcome this effect, we used an excitation light source with a wavelength centered at the very low absorption band of the material. Absorption in photosensitive materials has marked spectral features, where at the red edge of the band, the effect is very weak or close to zero. If we apply a laser beam with a wavelength in this range to the optical system, the light intensity distribution remains almost the same as when there is no material present. In other words, the intensity is increased by a billion times at the focusing spot. The absorption is ultraweak, and the photo-induced effect in the focusing region is therefore comparable to that obtained by a nonfocused laser beam with a high absorption effect. Thus, by combining a very low absorption material and a highly focusing system, the OPA method (called hereafter LOPA8) enables us to optically address submicrometer objects in 3D, equivalent to those obtained by TPA.

When we apply LOPA to microfabrication, we should bear in mind that resist exposure is also, per se, a highly nonlinear process. There exists a dose threshold above which the polymerization process can be 100% completed: see Figure 1(b). Therefore, nothing happens at out-of-focus areas due to the ultralow absorption effect. However, if there is polymerization, the materials will be washed out because the dose is too weak.

To show fabrication using LOPA,9,10 an ideal candidate is SU8, a commercial photoresist with an ultralow absorption in the visible range, particularly at 532nm, which is the wavelength of a ubiquitous and low-cost laser. Figure 2 shows scanning electron microscopy images of the experimental results. We created these structures using a continuous green laser of 2.5mW, with an exposure time of about 1 second per voxel. We have created 3D arbitrary structures (woodpile, chiral, or spiral, for example) that are similar to results obtained by induced TPA polymerization. The structures' features are well separated, layer by layer, in horizontal and vertical directions. The feature sizes are about 300nm (horizontal) and 650nm (vertical): see Figure 2(c). We obtained a voxel as small as 150nm, and the separation between two voxels or two lines can be as small as 400nm.11

In summary, we have developed a simple and low-cost fabrication technique, based on OPA phenomena in a weakly absorbing photoresist. This novel approach enables production of submicrometer 2D and 3D structures and could allow for imaging of submicrometer structures in 3D using a very modest laser power.12 This method would avoid destruction of the studied material, which is particularly relevant in biological research.

LOPA will provide a simple technique to couple a single nanoparticle (nonlinear, metallic, or fluorescent) to polymer-based photonic structures. In future, we will consider the engineered coupling between a guest moiety (nanoparticle) and the host photonic nanostructure to provide an enhancement of the guest optical response.

Ngoc Diep Lai is an associate professor. His research is focused on fabrication of 2D and 3D polymer-based photonic structures by interference and direct laser writing techniques, and their applications in nonlinear optics and quantum photonics.